What Is This Part of Boston, Massachusetts Actually Called?

Correctly identifying the collection of buildings around Faneuil Hall is no easy task. 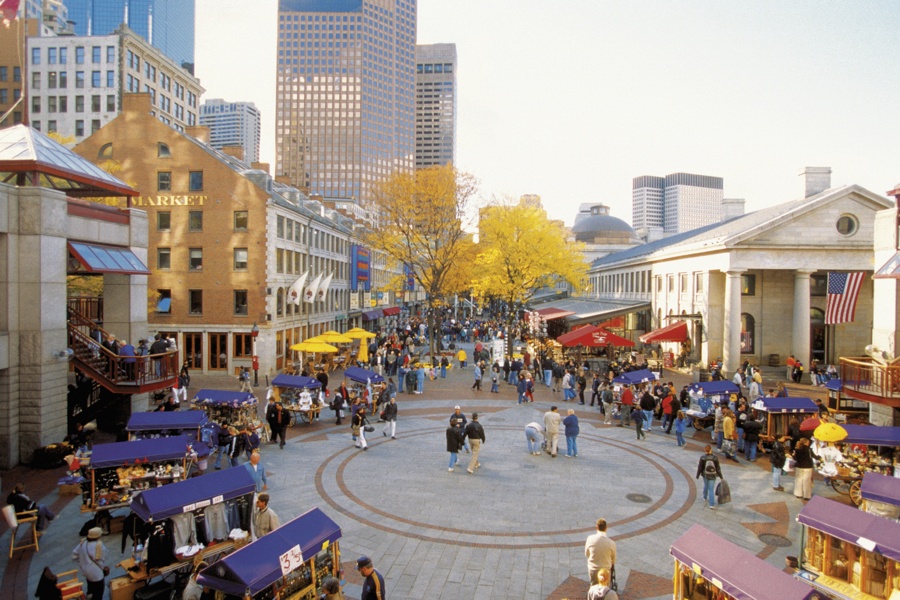 photo by Medioimages/Photodisc via Getty Images

Do me a favor real quick. What is all of the stuff in the above image called?

Sure, I bet if you live or have spent any significant amount of time here you can identify most (although, I’d bet, probably not all) of the components. But what about the cumulative whole? If you’re headed down to this very famous destination for tourists and holiday shoppers alike, where do you tell people you’re going?

Faneuil Hall is easy. Here are a few things most everyone in America who ever took a U.S. history class or rode a duck boat can say with crystal clarity: What Faneuil Hall is, where it is located, and what it is called.

Not so for everything that lies east of this vaunted landmark. For years now, I’ve been making trips to this place, particularly during this time of year. And I have never once been exactly sure what to call this collection of stores large and small, and restaurants good and bad.

Here’s what I do know: Quincy Market, the long food hall with a domed rotunda in its center that is easy enough to identify because it has the words “QUINCY MARKET” written in big block letters on its facade, is Quincy Market.

There are two other buildings of equal length filled with shops and restaurants running up both of Quincy Market’s sides—one to the north, and one to the south—which are known as North Market and South Market.

At this area’s easternmost edge is yet another collection of stores, inside a curled building wrapped around a circular courtyard. This, I learned just this month, is something called Marketplace Center. It’s very clearly at the border of, and not in the center of, this particular historic marketplace, but that is in fact what it’s called.

It is, however, distinct from Faneuil Hall Marketplace—so distinct, I also learned, that it’s owned by a completely different company than the one that owns both Quincy Market and the North and South markets. At least when it comes to this year’s holiday decorations, these two entities do not always see eye to eye.

The boundaries of this particular land mass are well understood: Hong Kong, the best karaoke bar in Boston, sits just to its south. The Hard Rock Café, and, further west, the Bell in Hand, sit just to its north.

So those are the components of this place, and the boundaries that hem them in, as I understand them. So what is all of this, the sum of these parts, called?

I, personally, tend to just call it “Faneuil.” I figure that’s wrong, technically speaking, but people catch my drift.

To settle all of this, I reached out to Joe O’Malley, general manager for Faneuil Hall Marketplace, to give me his take. It should come as no surprise at this point that even he’s been puzzled by the nomenclature for most of his life, including when he first started his current job six years ago. Back in the day, when he worked at a bar called Trinity (it’s now the Wild Rover), he and his friends referred to this part of town as, simply, “Trinity.”

He says tourists are puzzled as well. Often, he says, visitors will put both Quincy Market and the Faneuil Hall Marketplace on their to-do list, and be shocked to find they’re one and the same.

“So you’re not alone in the confusion, for sure,” he assures me.

O’Malley explains that the territory under the auspices of Faneuil Hall Marketplace includes Quincy Market, the North and South market buildings, and the greenhouse north of Faneuil Hall, which was once a flower store and is now a Sephora. This stems from an effort under Mayor Kevin White in the 1970s to revitalize the area and hand a chunk of it over to the control of a private company. It’s currently owned and operated by a New York real estate investment firm called Ashkenazy Acquisition Corporation.

Faneuil Hall Marketplace does not include Faneuil Hall, which is owned and operated by the city. This despite the fact that Faneuil Hall does have shops inside of it and is, due to that fact, a marketplace.

And for the record, the five-story Abercrombie store due south of Faneuil Hall isn’t part of Faneuil Hall Marketplace, either, despite being right there. Neither is the new-ish Sam Adams taproom, which overlooks Faneuil Hall.

Still, the answer to what to call all of this collectively is still pretty murky. Most normal people are capable of flitting from store to store not worrying about such things. O’Malley’s not bothered either. It doesn’t matter what people call it, he says, as long as people visit and have a nice time.

But he also offers an alternative. If you widen your aperture a little further to include all the destinations that radiate out from the general vicinity of Faneuil Hall, you’ll find markets of all kinds. There’s Haymarket, for one. And Boston Public Market, for another. Union Oyster House and the other historic restaurants and gift shops that abut it are a type of market, too. Shoppers and diners tend to migrate between all of these spaces anyway, so why not invite them to the party as well?

So he’s got a solution for those of us who need a concrete answer that includes all of this unambiguously. Some people call this part of town “The Market District,” he tells me.

Market District it is.