What Those Boston COVID Sewage Studies Can Tell Us about…Us

It's more than just seeing the future on new cases. 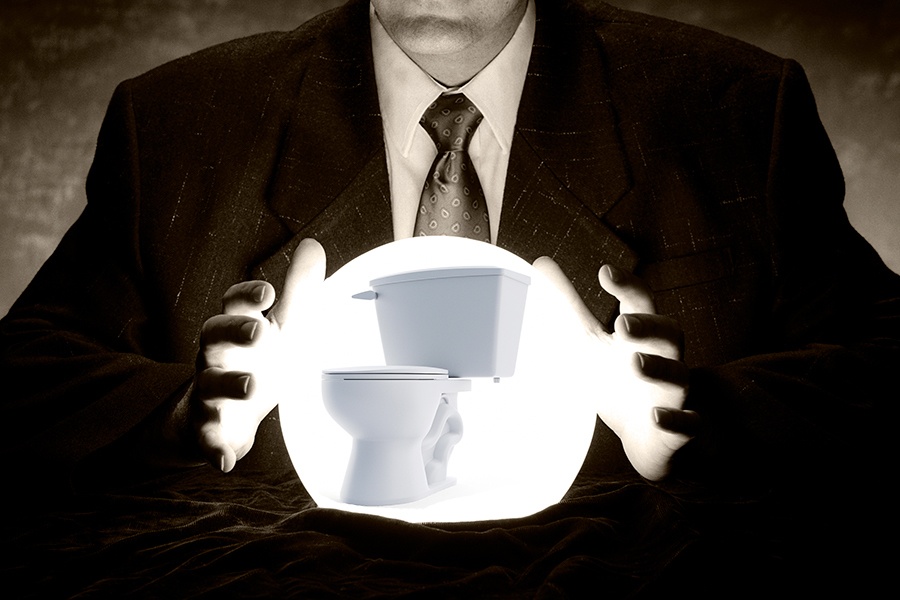 The arrival of the new Omicron variant has shown us, once again, how quickly things can take a turn for a worse in a pandemic. It has also forced us to confront an uncomfortable, sort of unbelievable, and overall pretty gross fact: Boston’s raw sewage can see the future.

At least, studies of the millions of gallons of poop and pee gushing through the city’s pipes can predict, with impressive and frankly spooky accuracy, spikes in COVID case counts several weeks in advance. In case you hadn’t noticed, the MWRA’s Wastewater COVID-19 Tracking chart had shown signs of a huge spike in cases before they showed up on the official count of positive tests, hitting an all-time high in early December. It wasn’t until just the past few days that the official case count skyrocketed upward to more than 7,000 positives a day, and home testing kits were suddenly the hottest item in town.

I just triple-taked at the 3-day spike in Covid-19 signal in Boston wastewater. Back to year-ago levels. Remarkable.

We got this early heads up thanks to Biobot Analytics, the Cambridge-based startup founded by MIT researchers that has been analyzing samples from the Deer Island Wastewater Treatment Plant since early 2020.

So how does this work, exactly? And what other valuable information are we flushing down our toilets every day?

Mariana Matus, Biobot’s CEO and co-founder, tells me it’s surprisingly simple to get this COVID spike-predicting data. The company simply taps into the existing sampling system at Deer Island, collects vials of wastewater from the plant up to seven times a week, and then runs what’s called a qPCR test on them, which determines the total amount of virus in the fetid slurry.

One big upside to testing this way is that the virus shows up in the urine and feces of people who’ve been infected whether or not they’re showing symptoms. Not everyone who gets the virus will generate a recorded positive test—but absolutely everyone in Boston has to use the bathroom. Once a whole lot of people start flushing the coronavirus down the toilet all at once, it shows up plain as day in the data.

In short, monitoring COVID positivity rates by testing millions of people individually is, clearly, challenging and expensive. Testing millions of people collectively by testing water samples is easy and cheap. And as the last two years have shown, it works. Biobot is now working on identifying individual variants of the virus, and in November successfully used its system to identify influenza.

“When COVID-19 hit, we saw the opportunity to demonstrate that wastewater is a platform—a versatile platform to collect different types of public health data,” Matus says. “It works so beautifully, like better than we could have anticipated.”

But testing for the coronavirus is not the only trick up Biobot’s sleeve. Before COVID, the company was actually using its technology to help officials better understand opioid usage, including the amount and types of drugs people are consuming. It piloted this concept in North Carolina, where officials used it to steer anti-drug abuse efforts, and it had been in talks with the MWRA about bringing a similar program to Boston before the pandemic hit.

There is plenty of potential for this growing field of science. Wastewater analysis has been used to track the spread of typhoid in Nepal, polio in Israel, and sexually transmitted infections in Spain. It can track salmonella and norovirus, or help experts look for worrying signs of antimicrobial resistance. It can monitor for signs of all kinds of drugs, like cocaine and methamphetamines, to give health authorities a sense of how widespread the abuse of certain substances is without having to wait for that data to emerge in the form of arrests or hospitalizations.

It can also detect other markers of health. Cortisol and adrenaline levels in wastewater, for example, could be tracked for signs of increased stress, and the presence of certain chemicals could indicate whether we’re eating enough vegetables, or consuming too much artificial sweetener.

Wastewater analysis for public health purposes is still in the early stages, but there are many different possible uses, says Dr. Eric Alm, an MIT researcher who runs the lab where Biobot got its start and serves as a scientific advisor to the company. Officials could look for biomarkers of obesity, and then see if the levels correlate over time to the implementation of a soda tax cutting sugar intake in the city. But there are potential military uses as well—governments could also analyze wastewater to look for signs that people in an area have been exposed to radiation from nuclear weapons production sites.

He could also foresee a future in which people opt to do small-scale wastewater analyses in their own homes, using specially made devices to be on the lookout for early warning signs of colorectal cancer, or even pregnancy.

“We’re seeing the the possibilities for wastewater-based surveillance just kind of explode as people get more excited about it, and more people move into the field with new ideas of what to look for,” Alm says. “COVID is what really launched it into the mainstream.”

There are, of course, serious privacy concerns to consider here. Because unless you’ve somehow got your own outhouse in Boston, there’s really no way to avoid being caught up in this poop and pee surveillance dragnet. How would we feel if bosses and landlords, or even the police, suddenly began surveilling wastewater in office buildings, college dorms, or prisons for signs of drug use?

Biobot has considered this. Its leaders say they want to ensure the technology is never used to punish people for the secrets their excretions reveal. Matus says new regulations on how this data can be used will probably be needed in the years to come. “We only support applications of the technology that have the potential to foster or improve the health of communities,” says Matus, the CEO. “This is not about being punitive.”

Meanwhile, as it prepares for a future in which we spend a lot more time tracking what revelations we can find in the sewers, Biobot is growing. It had just five employees before COVID hit. Now, after two years of proof that its analysis works, it has 50.

So just remember: That piece of porcelain in your bathroom? It’s not a toilet. It’s a crystal bowl.