Is This Charlie Baker vs. Gavin Newsom Finals Bet the Best We Can Do?

Their predecessors had way more vision, and a better sense of humor. 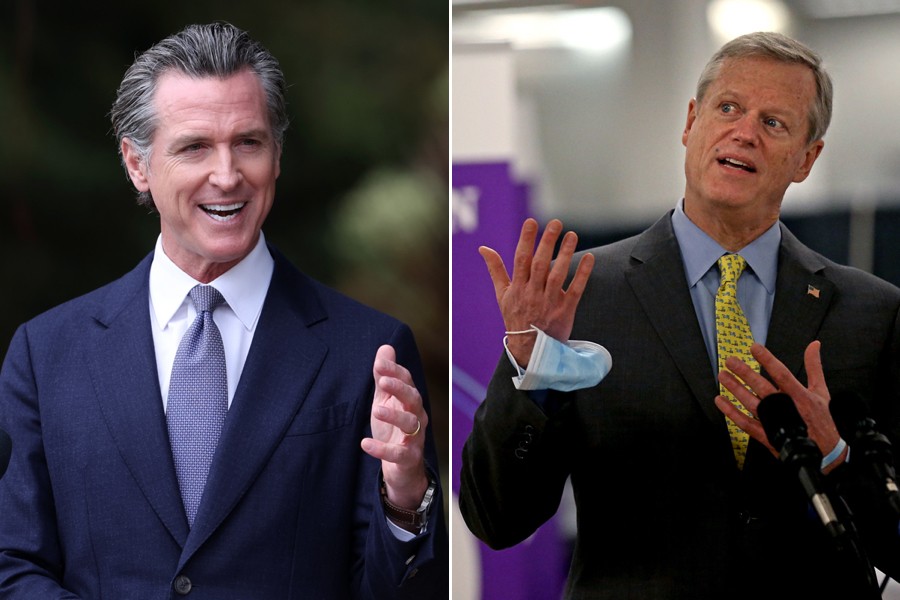 Boo to these men:

Ah, I see you’re feeling confident now with the series headed back to Boston, @MassGovernor? Yes, I’ll take that bet. And just so you know, it’ll be a @StephenCurry30 jersey. https://t.co/An1hRF9cyW

The political playoffs bet, wherein the head of one city or state makes a public wager with his peer in opposing territory, is a time-honored tradition. But clearly, as shown by the terms of the agreement for the NBA finals between the Celtics and the Warriors, it ain’t what it used to be.

Here is the best Govs. Charlie Baker and Gavin Newsom could come up with for the showdown: If the Celtics win, Newsom has to wear a Celtics jersey. If the Warriors win, Baker has to wear a Warriors jersey. And that, sports fans, is that.

Whatever happened to the gratuitous gift baskets of local foods? The pledges to volunteer with a rival city’s charity? The ritual public humiliation?

You may recall that in 2005, Pennsylvania Gov. Edward G. Rendell once followed through on an agreement to belt out the national anthem at the Garden when the Eagles lost to the Patriots in the Super Bowl.

Or that in 2011, Baltimore mayor Stephanie Rawlings-Blake, after the Ravens lost the Super Bowl to Pittsburgh, was forced to not just put on a Steelers jersey, but record a video professing her love for the team.

Sens. Ed Markey and Ro Khanna’s bet this year, which involves some local chocolate and coffee, is pretty tame. But at least it’s something!

That’s right. The Celtics had a great night and we’re ready to take this series—double or nothing? And you can keep the Draymond Jersey. https://t.co/Z7e6SY0rUn

Sure, these things are often pretty corny, and it’s not like anyone has been waiting for these bets with bated breath. Truth be told, it’s been a mixed bag locally.

Mayor Tom Menino was on his A-game when it came to city-vs.-city betting. Before the 2013 Stanley Cup Finals, he not only offered up a gift basket of local trinkets to the mayor of Chicago, but also “access to the City of Boston’s website for one day, to post a promotional video touting Chicago and its great attractions.”

Mayor Walsh, famously, did not do well with wagers. After losing two bets back-to-back early in his term, first to Denver and next to Montréal, he fully chickened out and vowed to never bet again.

Current Mayor Michelle Wu, it seems, is following in his footsteps. As of this writing we’re not aware of any wagers of any kind between Wu and any of the assorted Bay Area mayors who lay claim to the Warriors.

There is an argument to be made that this is for the better. Sometimes bets have gotten fantastically out of hand, such as during the great post-World Series flag caper of 1986, which saw a New York flag pilfered from outside Boston City Hall. And politicians do need to be careful about overpromising. For example, during the 2010 NBA Finals, then-Los Angeles Mayor Antonio Villaraigosa attempted to arrange a deal in which Jack Nicholson would be made available for a commercial filmed in Boston—or, if the Lakers lost, they’d get Matt Damon and Ben Affleck to do the same. But even after the Celtics lost, it seems the city’s crowned princes of cinema never held up their end of the bargain.

But why not take a few chances here? For us?

Is Baker, who I have witnessed first-hand doing such things as dousing himself for an ice bucket challenge while wearing a Free Brady T and tossing a bucket of fish in Jamaica Pond while wearing big floppy rain boots, afraid of getting his hands dirty in the twilight of his gubernatorial career? Is Newsom, a guy officially responsible for 40 million people, some of whom are the Real Housewives of both Beverly Hills and Orange County, suddenly afraid of embarrassing himself on television?

Something has gone awry here.

We urge these gentlemen, in the strongest terms, to throw some real chips on the table.

There is still time.