To Jeep, or Not to Jeep, That is the Question

Forget good mileage and a smooth ride—it’s all about the cool. Right? 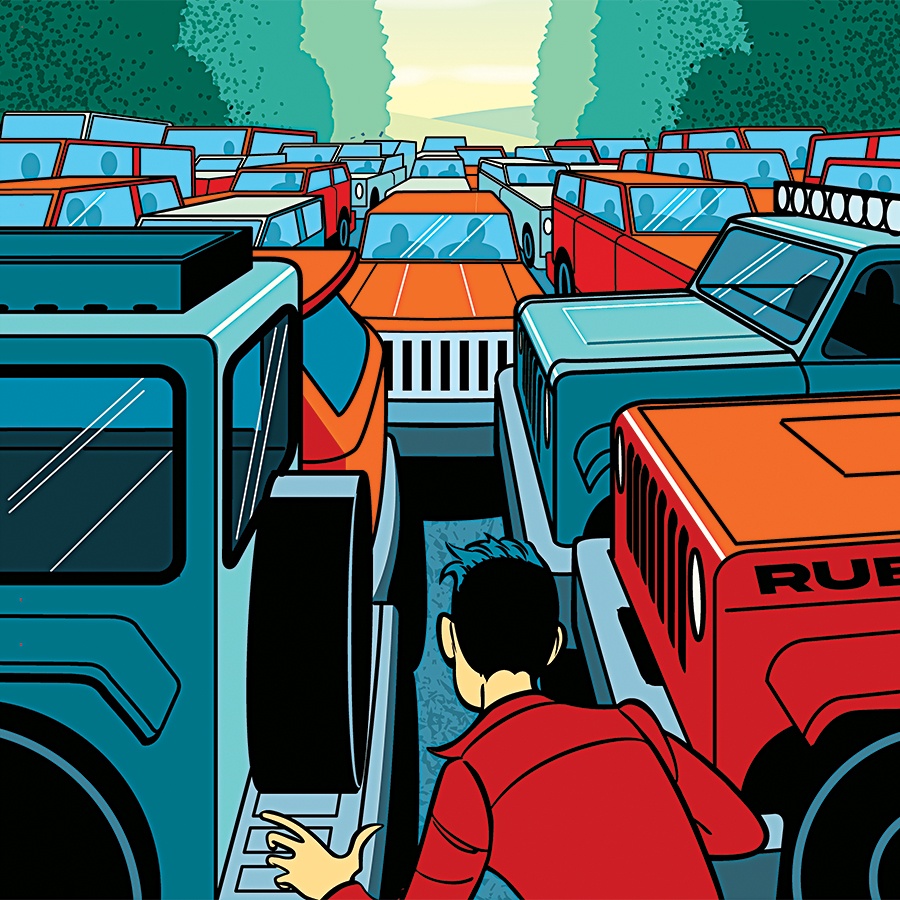 It was the first week of May 2022, and I was thinking about my car, specifically how long it was going to last. My hope was until 2024. It ended up being the second week of May. Thank you, Massachusetts road salt, for rusting out the undercarriage. My belief that rain could substitute for car washes might also have played a tiny role.

I was sad, but I couldn’t really complain; the car had a healthy run of 14-plus years. It’s just that now my wife and I were down to zero cars and two kids going to two different schools.

I had to go, ugh, car shopping.

Spring of 2022 wasn’t the time to buy, well, anything. Inventory was low, and dealerships could hold firm, which ended up working out for me because I could use my awesome negotiating tactic of “Sure. Sounds good.” It all worked out. In less than a week, we decided to rescue a 2019 Honda CR-V that didn’t have a ton of miles and fit our budget.

The only drawback? It wasn’t a Jeep.

Once again, I do not own a Jeep.

If you’re scoring at home, that’s a major choke job as a parent.

It’s not as if I’ve never been in a Jeep. The last time I bought a car, I was single and could explore options. So one day, I’m cruising on Soldiers Field Road, test-driving a 2007 Liberty. It didn’t take long to feel indestructible—to know that if Watertown was in danger, I could hop the median and plow through the Charles. (Didn’t come to that.) But then I cued into the ride, and though I had never driven a Jeep, I thought, Wow, it really drives like a Jeep, followed by other words, like firm, boxy, and grippy.

I wasn’t sold and decided to cut my own path. I went out on a limb and got a RAV4, but in black, to set myself apart. Fast forward to May 2022, and I didn’t even think Jeep.

What was I not thinking?

The fact is that Jeeps have always been something. Back in the late 1970s/early ’80s, I was at a friend’s house when his dad brought home a Cherokee or Wrangler or Renegade, something with an awesome name, and I thought: 1. That’s really, really cool-looking. 2. That has no place in the suburbs. And both were true for the same reasons. The thing was tall and square, with snaps and a roll bar. It’s supposed to roll? Like, at the mall?

Jeep owners love driving their Jeeps, even though—if they’re being honest—they don’t always. “Is it smooth? Not so much.” “Would you take it on the highway? I’d prefer to hear stuff.” “Does a lot of rain get in? Define a lot.”

Does any of this matter? Eff no.

Owning a Jeep is about taking off the doors and roof and putting down the windshield. It’s about climbing boulders and hauling trees. It’s about liberating Europe in World War II.

Is any of the above on the day planner of anyone with a Jeep? Eff no again. And that’s not the point. You could do that, but really, it’s just about making a few statements when you’re riding high: I may never be in the woods in this Jeep Cherokee, but I sure as hell know I can take Wenham, Mansfield, Concord, and Carlisle, if necessary. I don’t fear fluffy snow or small leaf piles on the way to getting a latte. And I live in a low-crime area because with no doors to lock, I have zero concern that the phone charger I leave on the front seat all the time will be there in the morning.

Forget rationality. “No one needs a Jeep,” says Andrew Wendler, deputy editor of Forbes Wheels and resident of Toledo, Ohio, the city Jeep calls home. No one looks at crash reports or gas prices. No one wonders, “Where am I gonna put groceries or my mom when I take her to chemo?” or “How will this look in the temple parking lot on High Holidays?”

People get one because they’ve always wanted one, because they’re fun and uncomplicated. You don’t mind scratches or dings or spraying through mud because “You hose out the interiors,” says David Lucsko, professor of history at Auburn University and author of Junkyards, Gearheads, and Rust: Salvaging the Automotive Past.

Jeeps are dumb in the best way. They’re 1970s dumb, when cars came with cigarette lighters, kids drank water out of tennis ball cans, and I was 10 and wore a bucket hat decorated in Schlitz logos.

I’ve got a better word than “fun” and “uncomplicated.” Dumb. Jeeps are dumb. Pure dumb. But dumb in the best way. They’re 1970s dumb, when cars came with cigarette lighters, kids drank water out of tennis ball cans, and I was 10 and wore a bucket hat decorated in Schlitz logos. It’s dumb like Skee-Ball and Cleveland Browns fans trying to taunt Terrell Owens in 2004 with “T.O. has B.O.”—the dumbest, most hysterical sign ever.

But the “My God, another one” factor isn’t because of the classic-looking Jeeps out there. It’s due to the rise of Jeeps that look and drive like every other SUV. The missing practicality is no longer missing. These models have doors meant to stay on, aerodynamics, and the ability to take off-ramps at more than 30 miles per hour. But they also have one other draw, the tipping point. It’s those four letters and that badass history. No one has an excuse to be Jeepless.

Still, I’ve been going on what other people say, and still, we’re one car short in my family. My last and only Jeep impression was based on 30 minutes in a Liberty—not exactly the bellwether, as Jeep people will ’fess up to. I’ve given cilantro more chances. I needed to find out for myself and maybe, just maybe, fall in love. So I went out and test-drove two conventional ones—a Compass and a Cherokee—and two Wranglers.

The Compass was buzzy, unimpressive, and a “no” 20 seconds in. The Cherokee was a definite step up. It didn’t make me want to ditch my Honda, but it got me thinking that I could, in fact, own a Jeep. More than that, I could say, “I drive a Jeep,” and oh yes, I would egregiously drop that into any conversation.

But then I realized that I’d just be a poser. It would be like the Dodgers saying they won the World Series in 2020. Yeah, but not really. I’d have to put air quotes around Jeep every time I said it.

I gotta be honest. The first two Jeeps were just a warm-up for the Wranglers. The two-door, which had a soft top, was smaller, noisier, and would never come home with me. The four-door had a hard top that the sales guy explained could easily be taken off, along with the doors, with a special tool.

I’ll be honest again: I’m suspect of that claim. I’ve gotten new cable-TV remotes with a similar promise of “Just point it at the screen, and everything will sync up.” After 45 minutes on the phone, a rep gives me the secret five-digit sequence, and the Food Network is mine once again. And somehow, doors and a roof are going to be less complicated? Even if they were, I’m thinking, Where am I supposed to put these solid steel attachments? Now I have to clean out the garage, which means I finally have to get a sticker for the dump to haul the 14 bags of yard waste that have been sitting there since the last town pickup. Man, a Jeep without a roof would be great for that kind of job. Damn you, Jeep-22.

Then I remember my mission. Wrangler. Test-drive. Just climb in. I soon feel the power and possibilities. I can instantly tell that this Jeep would be fun to cruise around in—for about 10 minutes. Then not so much. Even before that revelation, like six minutes before, I hear my wife’s voice saying, “Get me out of this thing right now.” She’s no weakling. She’s tenacious enough to stay on the phone with an insurance company until she gets the answer to her question. But she doesn’t love being in cars. She doesn’t want to zipline or walk across a rope bridge. She doesn’t like roller coasters. She doesn’t even like when I accidentally bump into her in bed.

She’d rather ride a camel than get into a small cab that feels every contour.

Jeep did a good job of upping its SUV game, and has been Jimmy Buffet-like amazing in maintaining its lifestyle brand for decades.

So my non-dream of getting a Jeep will never come true. No last-second off-roading even though I don’t even like when my tires run up against a curb. No showing up for a teacher’s conference in a hyper-green wonder. Mostly, no getting the secret wave that Wrangler drivers apparently give to each other. That hurts the most since it seems like such a life-affirming, we’re-all-getting-rained-on-together kind of thing. Honestly, I’d probably end up giving my JBS (Jeep Brothers and Sisters) a finger gun because unity gets me excited, and I always add a layer.

And yet, why should I and so many others lose out? Jeep did a good job of upping their SUV game, and they’ve been Jimmy Buffett–like amazing in maintaining the lifestyle brand for decades. But they don’t own a wave. They don’t own friendliness. They certainly don’t own simpatico.

So, Honda Brothers and Sisters, I’m starting our own wave. It’ll look just like a regular wave, and it’ll come morning, afternoon, or night. I’ll do it in traffic, parking lots, and from my driveway, and I’ll give it to anybody in a CR-V, Pilot, Accord, Civic, even an Odyssey because we’re a big-tent kind of people.

As long as it comes with seat warmers, that’s a world I want to live in.

First published in the print version of the January 2023 issue with the headline, “Who’s Got the Keys to the Jeep?”