A barn-style abode with a coastal aesthetic feels right at home on the shores of Cape Cod. 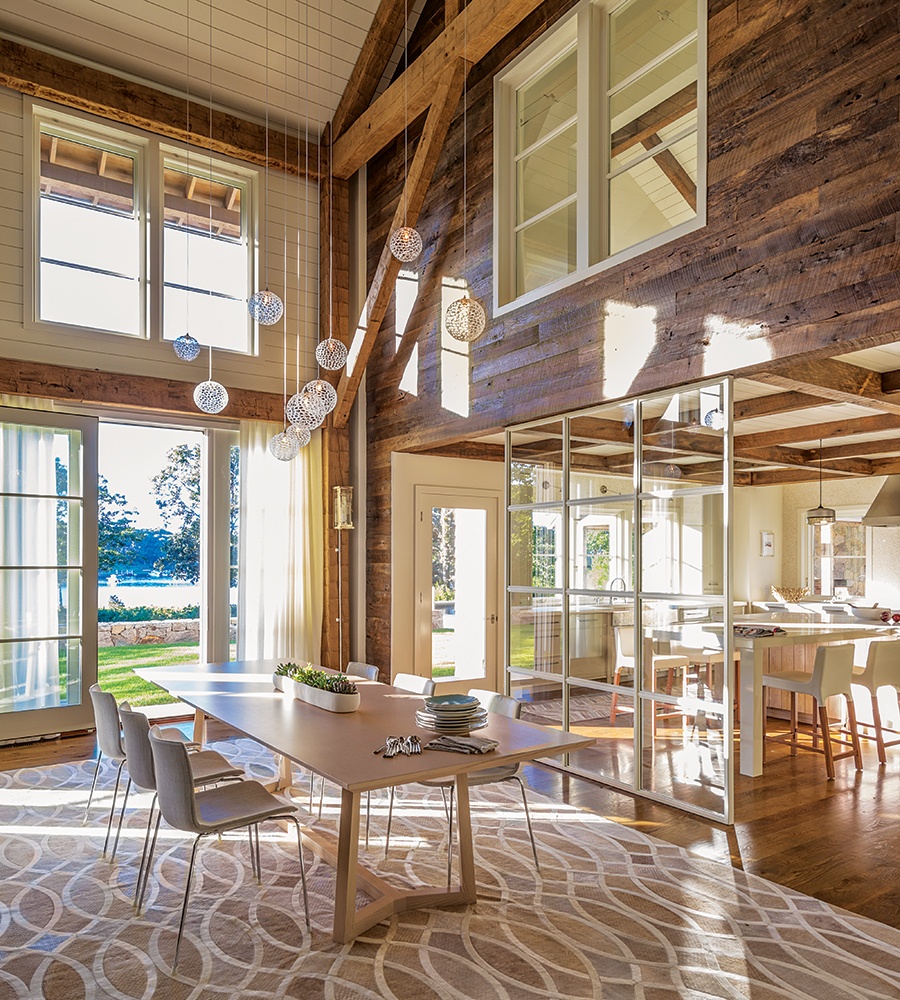 “Catifa 46” chairs from Arper surround a custom dining table from Chilmark Architectural Woodworking. The sinuous geometric pattern of the hide rug from Landry & Arcari adds interest to the floor. / Photo by Eric Roth

Designer Jennifer Palumbo doesn’t ride horses, though she seems the tiniest bit dismayed by this. Because, the truth is, she loves equestrian style. “I am obsessed with barns,” she says. “I’ve always dreamed of having a barn-type home in a coastal setting.”

Still, it took Palumbo some time to determine just where she’d build that barn for her family. “I spent at least 10 years exploring New England beaches, renting, and doing weekend getaways,” the designer says. “Chatham, Kennebunkport, Westerly—I’ve seen them all.” Then, one blissfully beautiful day with blue skies and gentle breezes, she visited a property on the bay in Osterville. “I walked toward the back and said, ‘This is it,’” Palumbo recalls. The rest, as they say, is history.

Architect Jim Cappuccino and project manager Erin Levin, from Falmouth-based Hutker Architects, worked with Palumbo to execute her vision for a coastal abode, complete with an interior timber frame. The concept dictated that the barn-like structure should appear as though it had always been there, and that rooms had been added around it. “The barn is the centerpiece of the home,” Cappuccino says. “It is the common space that connects the private ones to the north and south.” 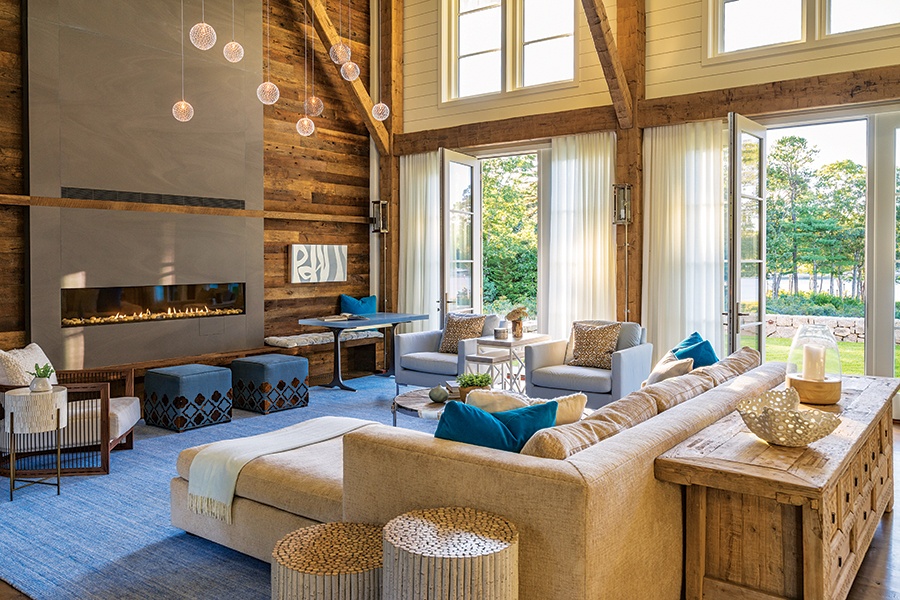 In the living room, La Lune Collection side tables made from poplar branches are an organic foil to the abstract artwork by Jessica Feldheim that hangs across the room. / Photo by Eric Roth 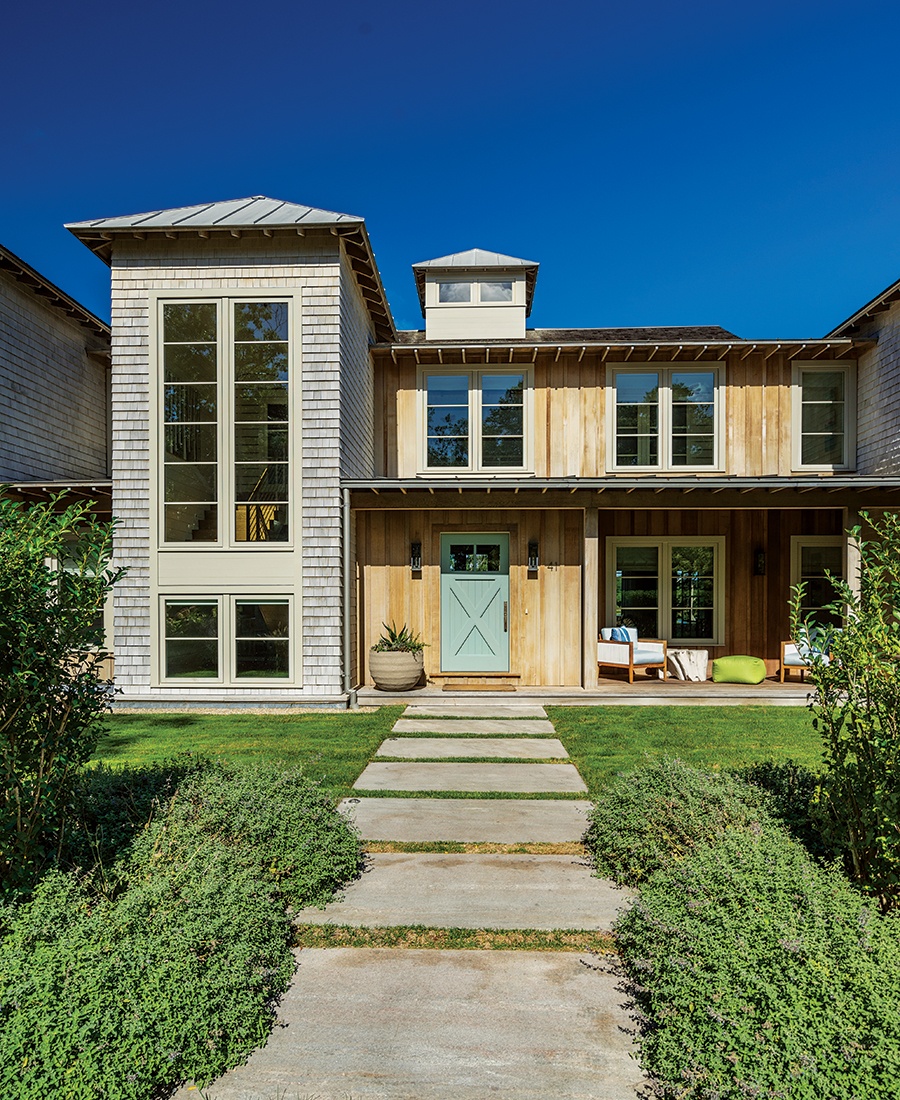 Designer and homeowner Jennifer Palumbo chose an organic palette for the exterior. “I wanted [the house] to seem as though it was growing out of the landscape,” she says. / Photo by Eric Roth 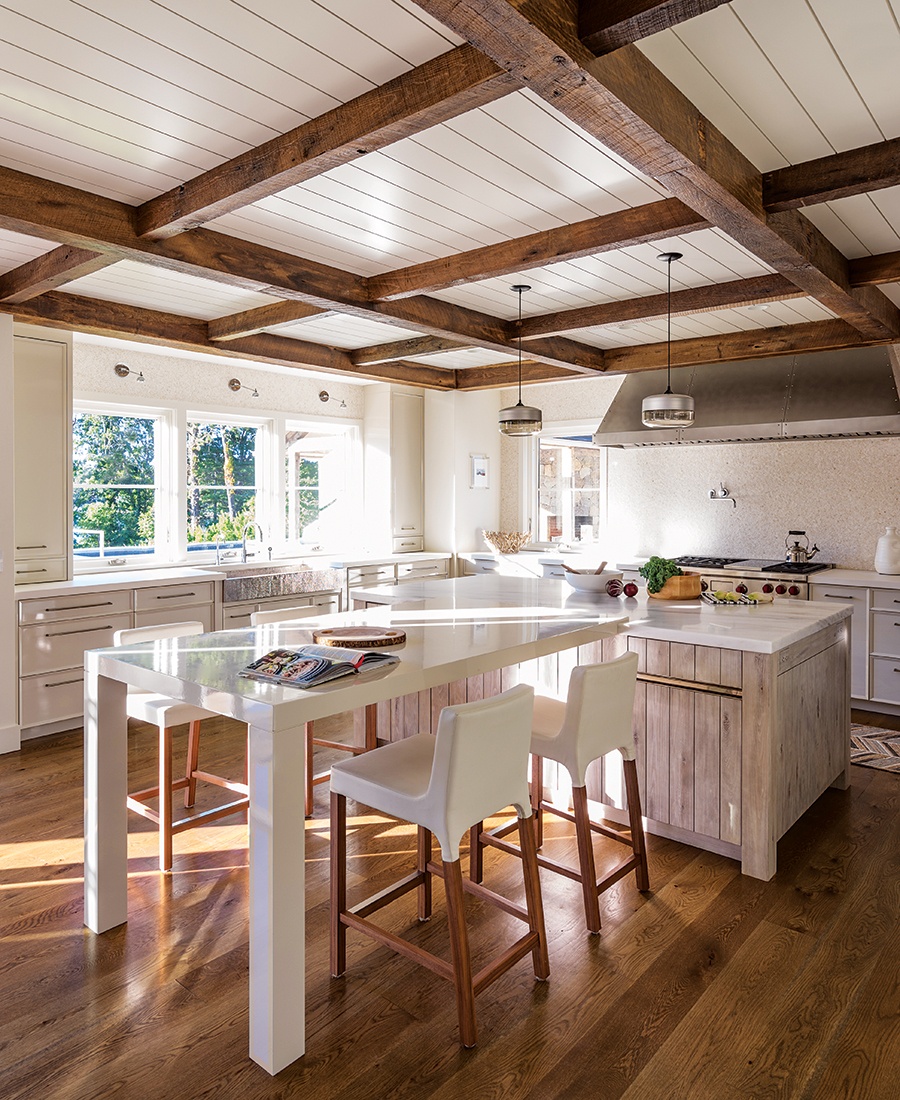 Blu Dot “Knicker” stools with wood legs and upholstered seats line both sides of the glossy “Parsons” table in the kitchen. / Photo by Eric Roth 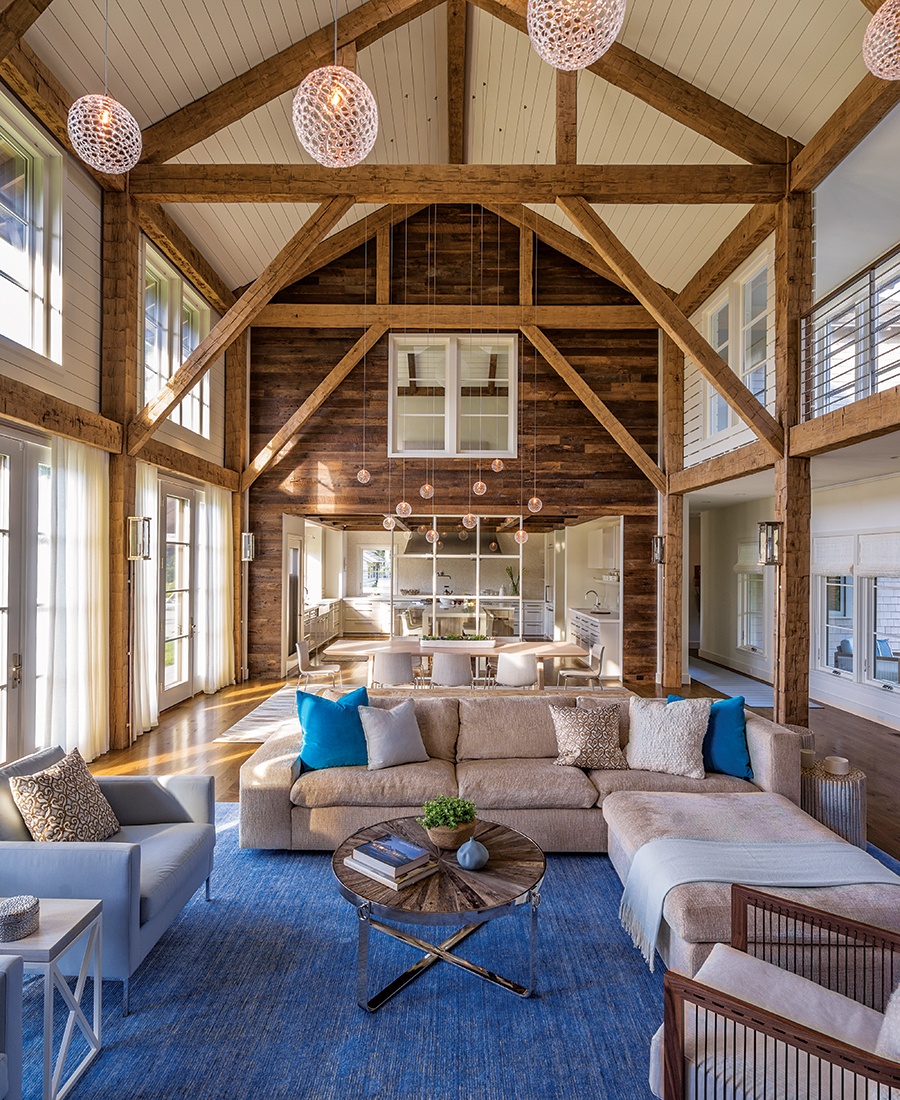 Palumbo designed the custom sofa in the living room, made by Newton-based Partners in Design and upholstered in a chenille Mark Alexander fabric. / Photo by Eric Roth

The new six-bedroom house, which includes a cabana with an open-air pavilion by the pool, flaunts a barn-meets-the-sea aesthetic both outside and in. White cedar shingles, commonplace on the Cape, cover much of the exterior, while the vertical western red cedar boards that clad the central barn portion—not to mention the standing-seam-metal roof accents on the covered porch, stair tower, and cupola—conjure a farmhouse feel. And although the front door boasts an “X” detail that would not be out of place in Vermont, the watery blue-green color speaks to the coastal locale.

Beyond the vestibule, the house opens into the two-story, 750-square-foot living room, outlined by a hand-hewn timber frame made from white oak. New Energy Works, a timber-framing company in Farmington, New York, crafted and raised the structure based on the architectural team’s design. “Every post and beam used here is essential,” says Eric Fraser, the timber frame general manager at New Energy Works. “They can be configured differently, but they’re all needed to allow for the open space.”

Palumbo complements the barn architecture with breezy, contemporary décor that mixes clean lines with modern and earthy materials. A gray-porcelain fireplace surround and reclaimed-wood boards anchor the living area, a multifunctional hangout space with custom upholstered seating and a built-in game/work table. “It’s a popular hot spot for puzzles and laptops,” Palumbo says. Ten blown-glass mesh pendant lights hang above to delineate the space, which opens to the back lawn. Lantern-style sconces with exposed nickel conduits are affixed to each timber post. “It’s just what you’d see in a barn,” Levin says. “The details are visually connected to the narrative.” To that end, a wall of rustic reclaimed-wood boards also bookends the dining side of the space, where similar sensibilities prevail. 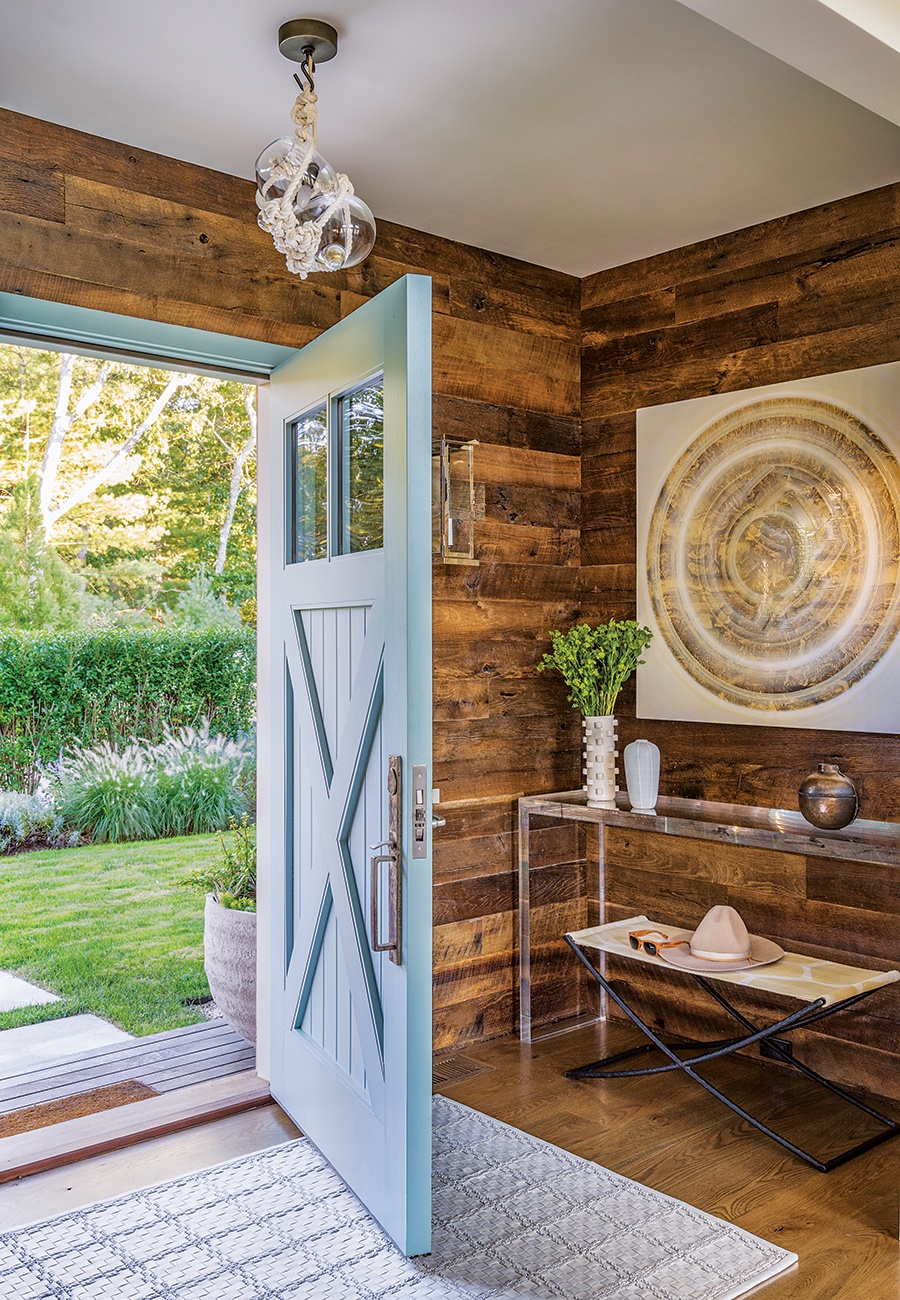 In the reclaimed-wood-lined vestibule, a Roll & Hill glass-and-rope pendant is an anything-but-cliché nod to the home’s coastal locale. / Photo by Eric Roth 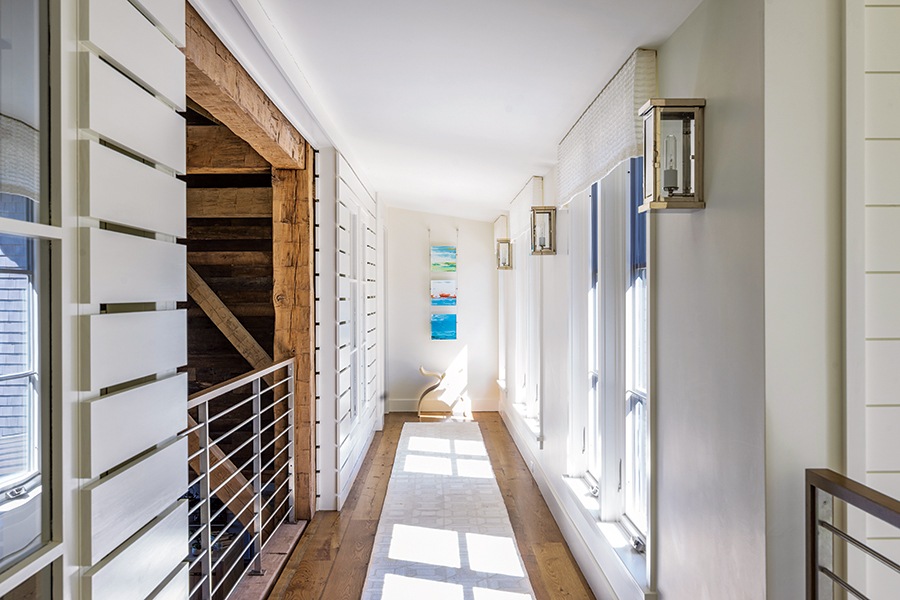 Light filters through the gaps of the wood slats on the mezzanine, which connects the kids’ bedrooms to the master suite. / Photo by Eric Roth 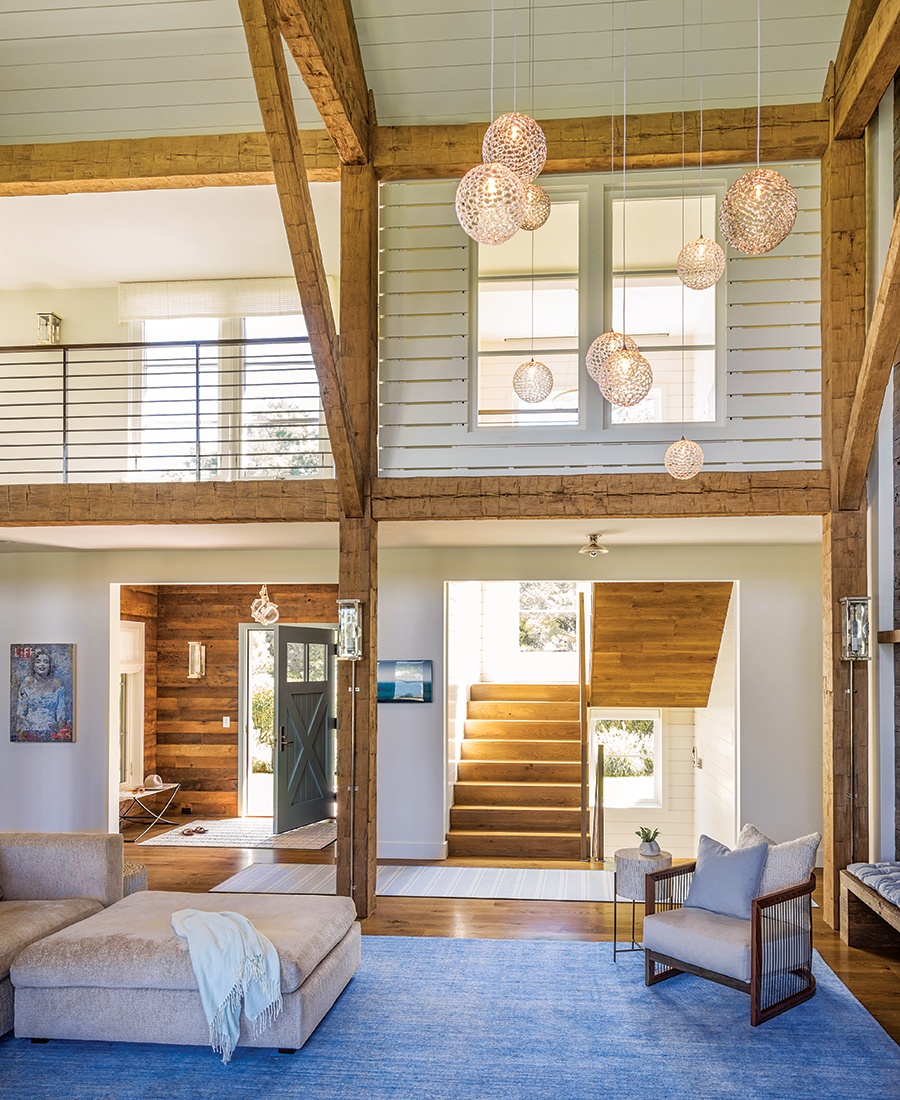 Contractors built the treads and risers of the waterfall stairs in the same white oak as the flooring. / Photo by Eric Roth 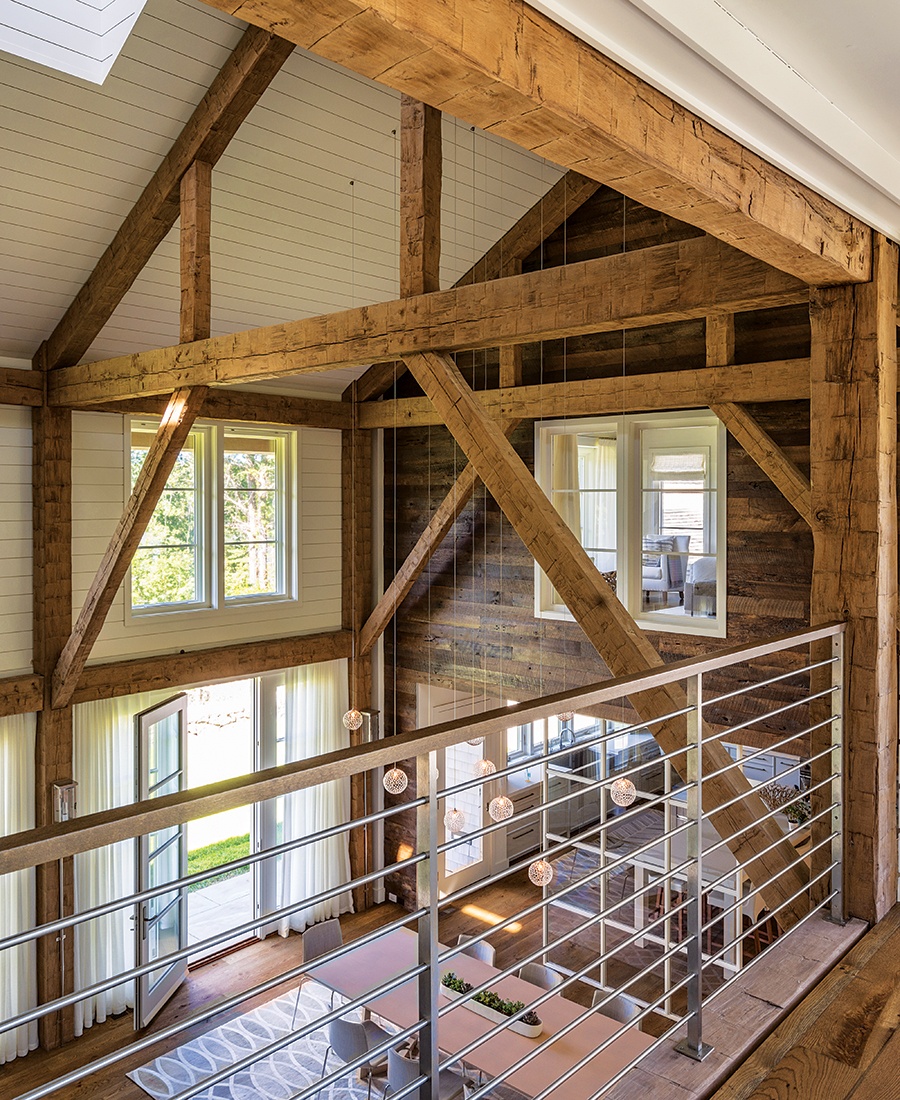 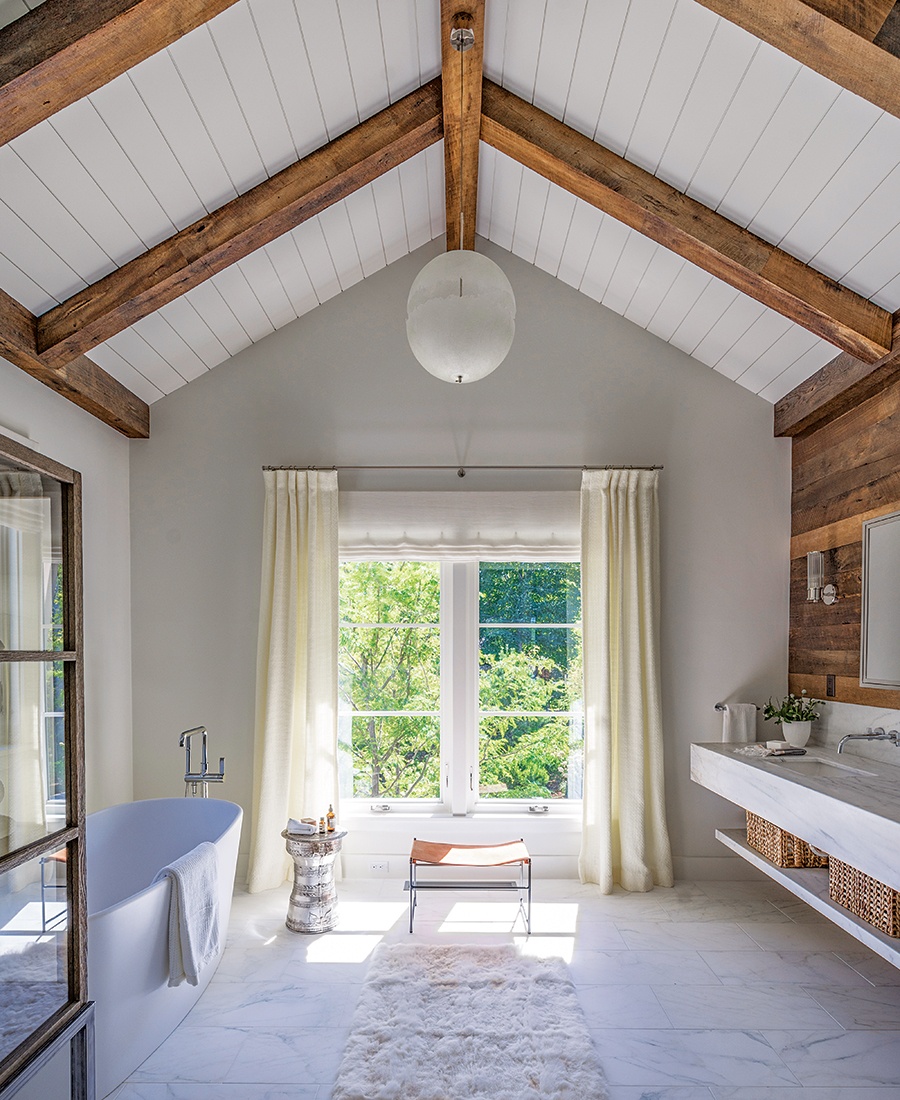 Décor in the master bath includes a bench from Bodega Nantucket and a Palecek drum table. / Photo by Eric Roth 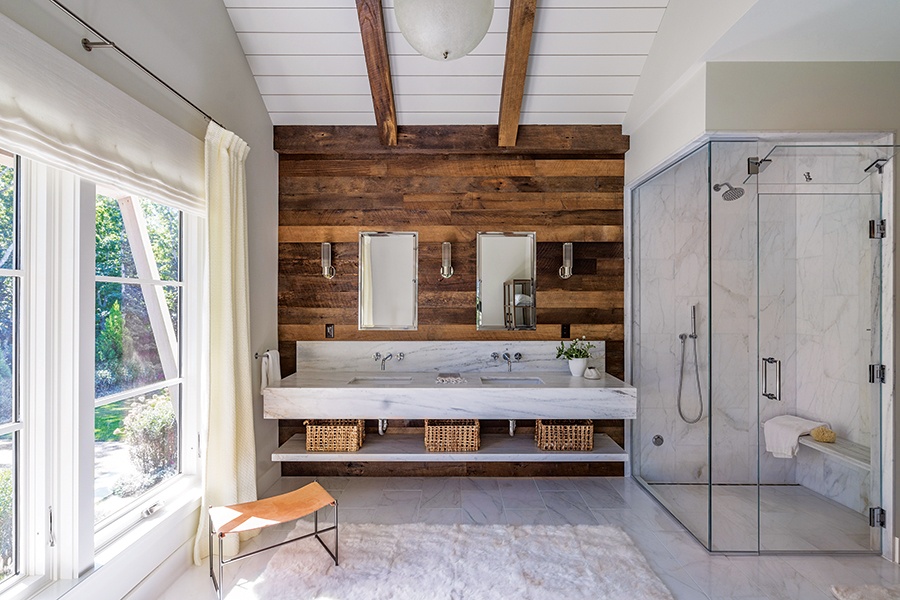 The leathered finish of the marble vanity contrasts the texture of the rustic wood slats in the master bath. / Photo by Eric Roth 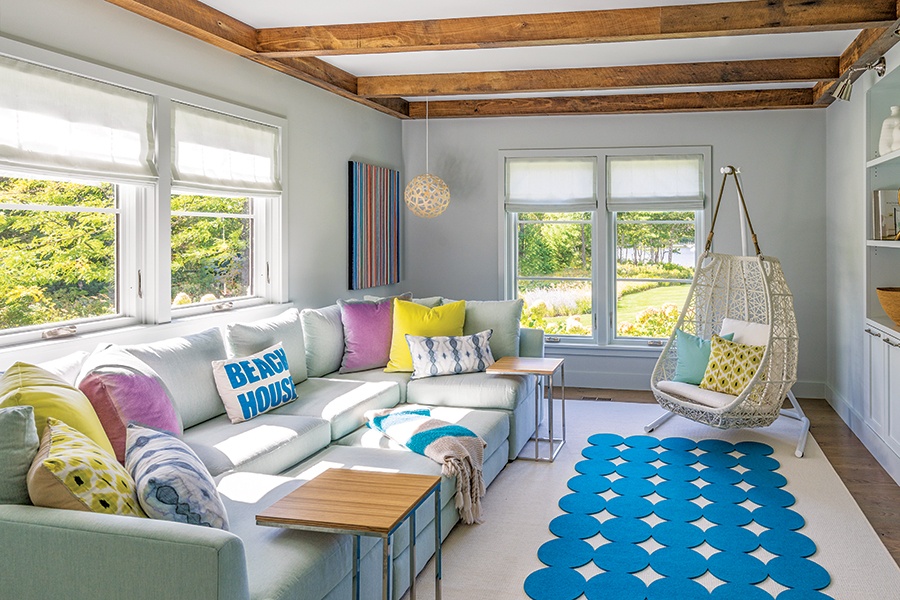 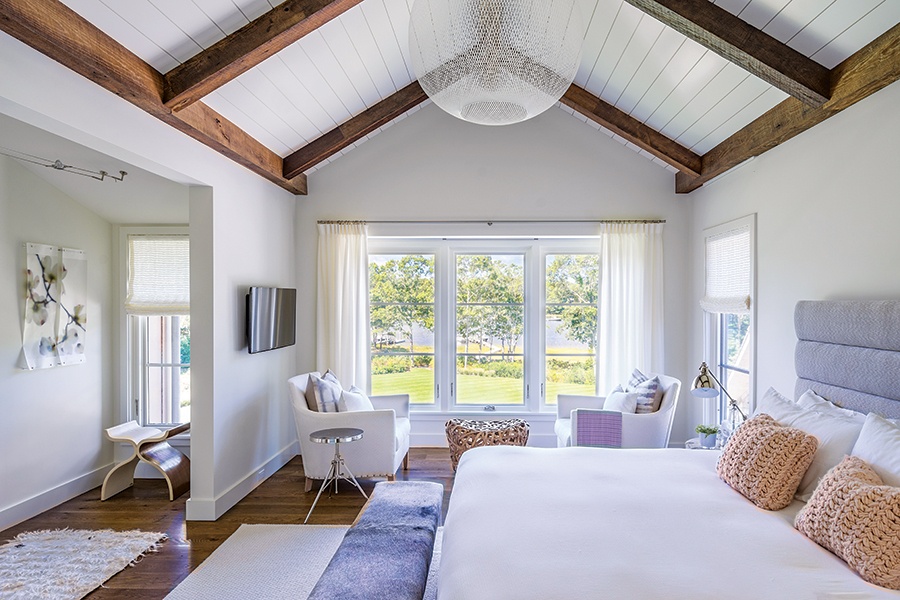 Made with gray velvet, the custom channel-tufted headboard in the master bedroom feels glamorous but laid back. The fiberglass Moooi pendant light is a play on the small glass fixtures in the main living space. / Photo by Eric Roth

The kitchen, which is tucked behind a fixed wood-and-glass partition that reduces noise but maintains a clear sightline between rooms, also showcases a tactile blend of country and coastal elements. The ceiling, purposely low for an intimate feel, boasts decorative wood beams that reference the timber structure. Flat-cut limestone resembling beach rocks covers the range wall, and a hammered-nickel farmhouse sink overlooks the back patio. Whitewashed French pine on the center island, meanwhile, juxtaposes the high-gloss finish of the Venegas and Company cabinets around the perimeter and the attached “Parsons” table used for informal meals.

Though the design of the house encourages togetherness, there are a few places for retreat. Kids head to the cheerful family room to lounge on the cushy sectional or swing in the suspended rattan chair, while Palumbo often works in the office across the hall. Upstairs, a mezzanine akin to a barn’s loft leads to the airy master bedroom, complete with a cathedral ceiling and a trio of awning windows that she loves to leave open on summer nights. The room’s most distinctive feature is a pair of windows that overlook the great room. Palumbo likens the effect to sleeping in the rafters.

Overall, the designer’s barn-to-beach concept is a success. She balanced her timber-frame dreams, her refined tastes as an interior designer, and her family’s need for laid-back living, and merged them seamlessly on the shores of Cape Cod. “We wake up, sit under the cabana, swim in the pool, fish from the dock, light a fire, have drinks, and roast s’mores,” she says. “We want to be here, and we want to be together.” 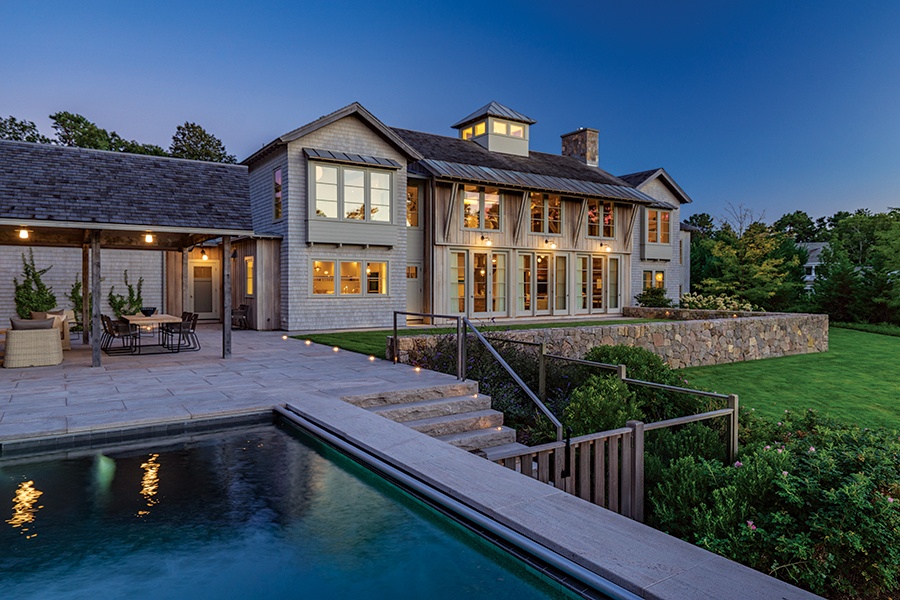 Landscape architect Kris Horiuchi masterfully navigated the uneven terrain, integrating a pool into the side of the hill, which had a four-foot drop-off. / Photo by Eric Roth 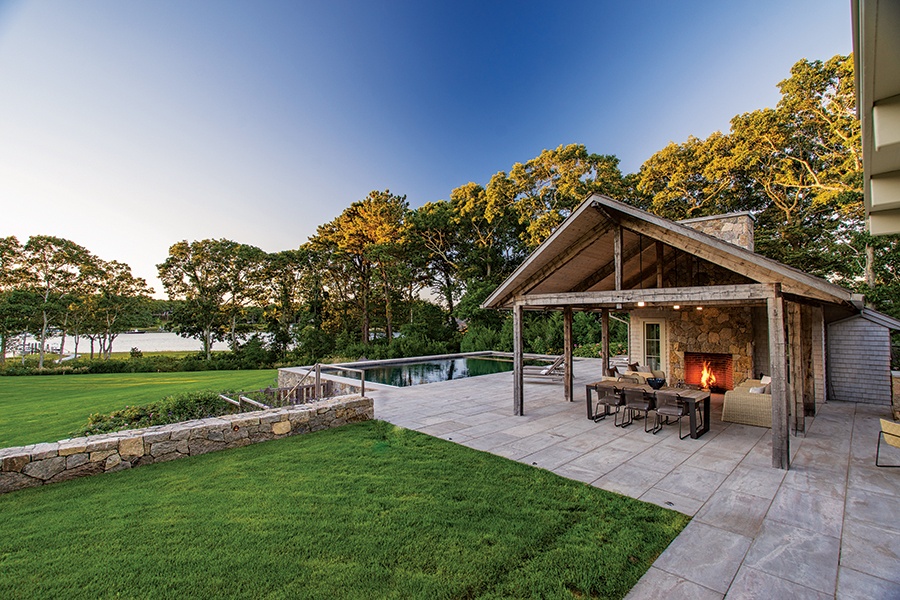 Set back from the house, the cabana features a covered outdoor-seating area with a fireplace and Roda furniture from Casa Design Group. / Photo by Eric Roth 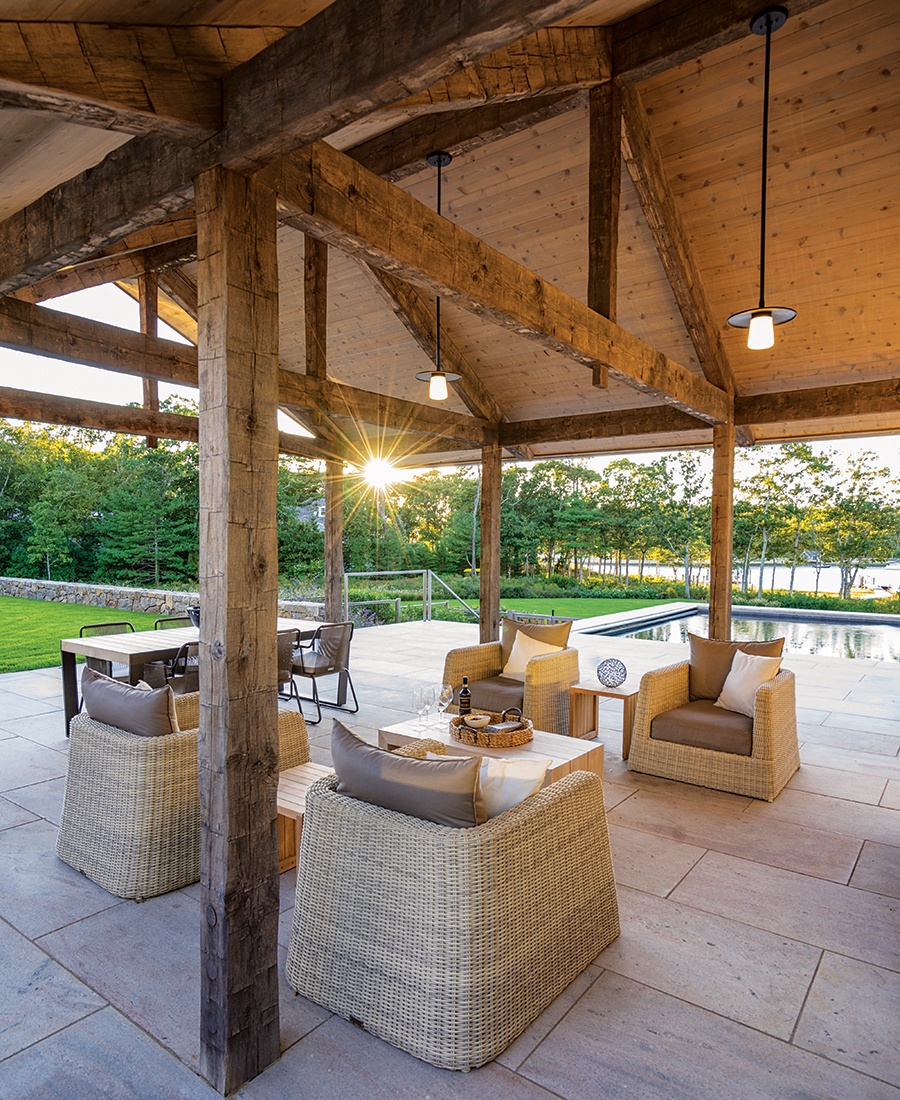 A cluster of “Zeya” lounge chairs from Janus et Cie sit on the brushed-granite patio. “I didn’t want bluestone because it’s too hot on your feet,” Palumbo says. / Photo by Eric Roth 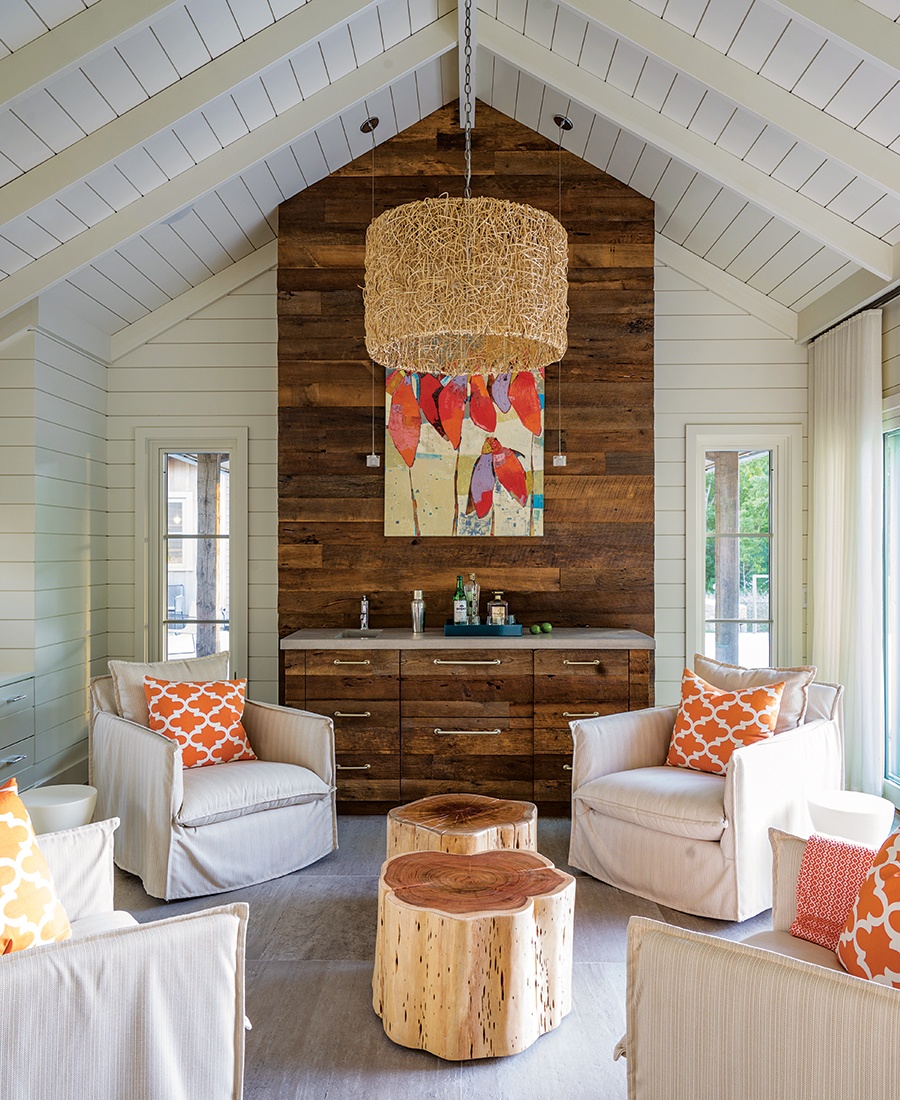 Slipcovered swivel chairs in the cabana provide a respite from summer sun. / Photo by Eric Roth 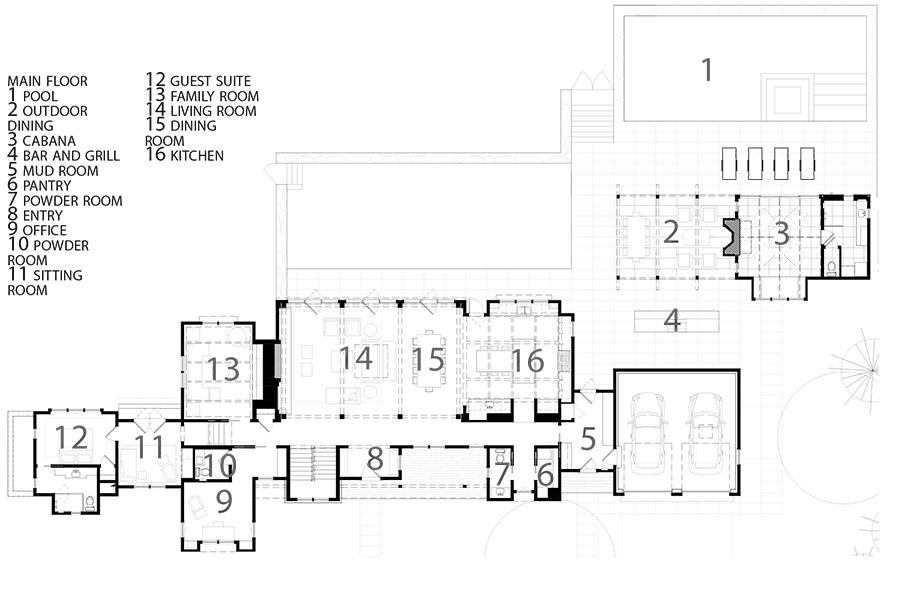