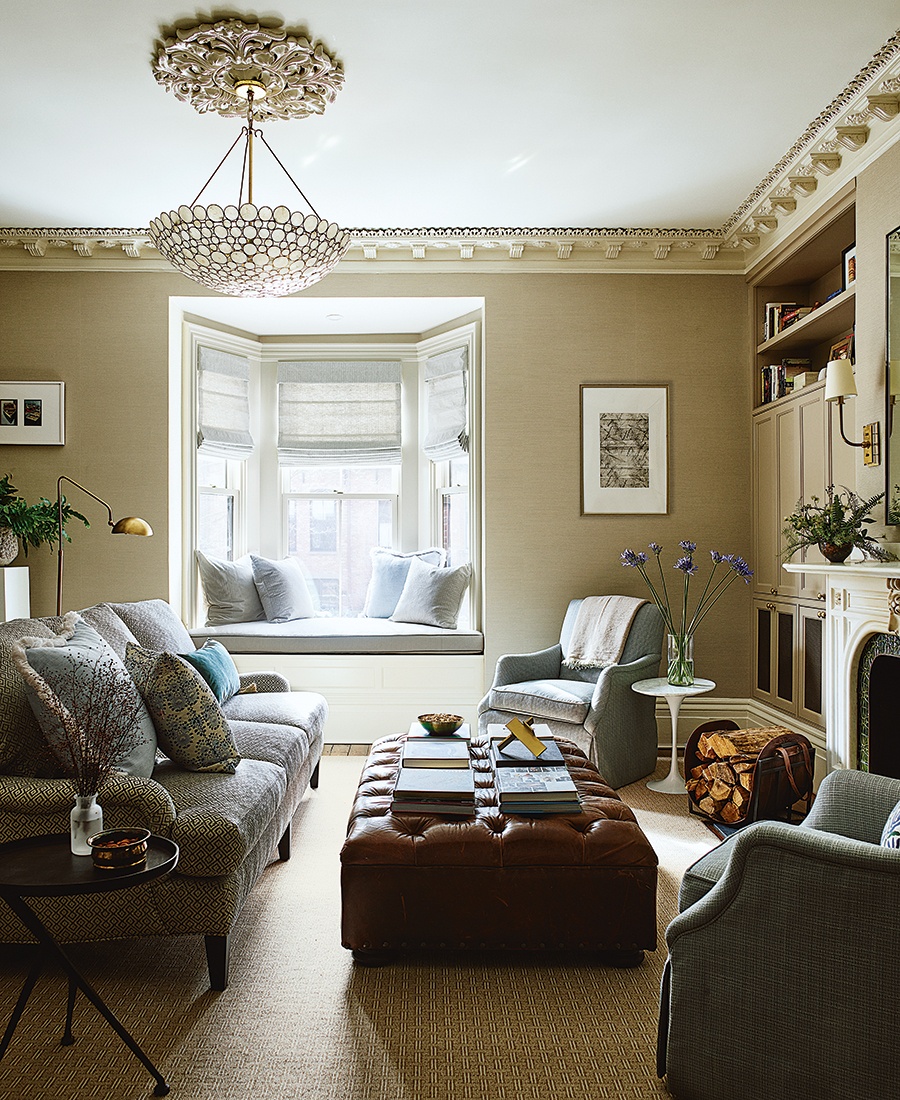 An upholstered sofa and a set of lounge chairs, all from Lee Industries, create a perfect space for watching a movie or reading a book in the media room. / Photo by Jared Kuzia

Think of a brownstone like a valuable, vintage bottle of wine. Maybe a Bordeaux Saint-Estèphe. Up front, it’s classic, powerful, and dignified. But give it a moment and you’ll find it ultimately has a smooth and very comforting finish.

It comes as no surprise that a couple with an appreciation for a cozy, Old World wine like this would be drawn to the Victorian architecture of Boston’s South End. Built in 1899, their 4,400-square-foot, five-floor brownstone is peppered with original details like intricate crown molding, bannisters, and fireplaces. As it were, 1899 was—forgive the wine metaphor—a good year for a young family with traditional taste.

Having lived on just the upper portion of a three-floor, multifamily brownstone down the street, the couple were eagerly looking for a whole brownstone to call their own. They scooped up this four-bedroom, five-bath gem before it even hit the market. But, like the most coveted wines, it would take some time to reach its full potential.

When the family of three purchased the home in April 2019, the historical bones were there, but muddled. At some point in its past, the brownstone had been clumsily divided into two units. The basement had been finished to make the separation an even split, but the ceilings were low, the floors vinyl, and the lights fluorescent—like a classroom stuck in the 1970s. 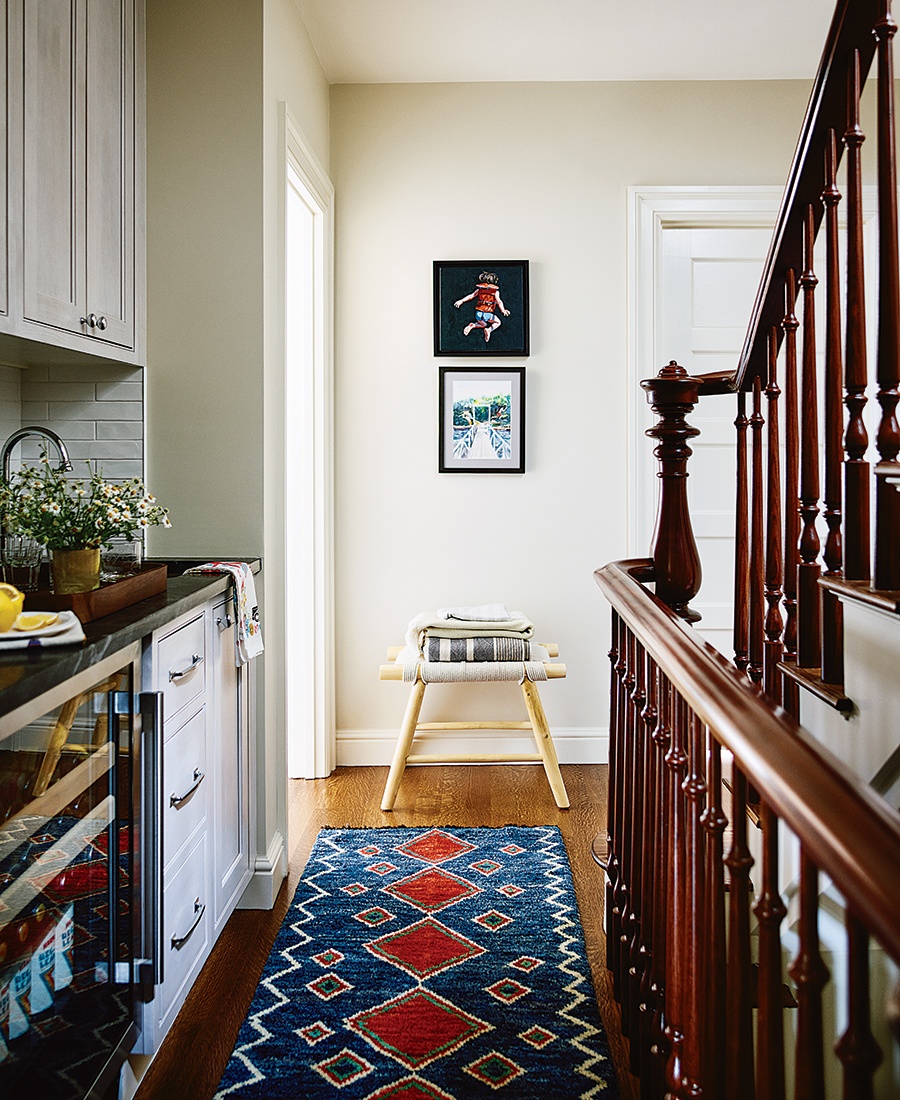 Near the stairs to the roof deck, a small kitchenette allows guests to get refreshments without having to traverse several flights to the main floor. / Photo by Jared Kuzia 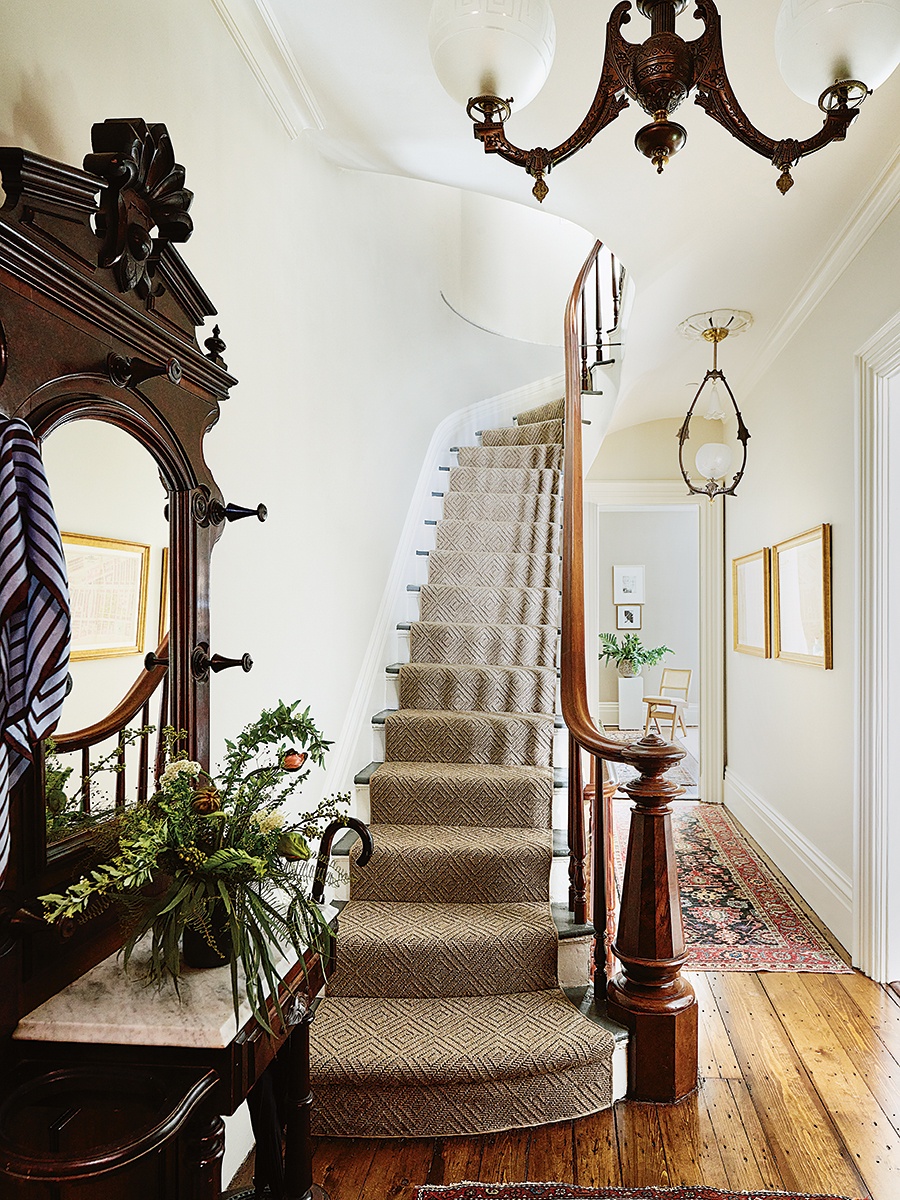 In the entry, guests are greeted by a staircase with lovingly restored spindles and banisters. / Photo by Jared Kuzia 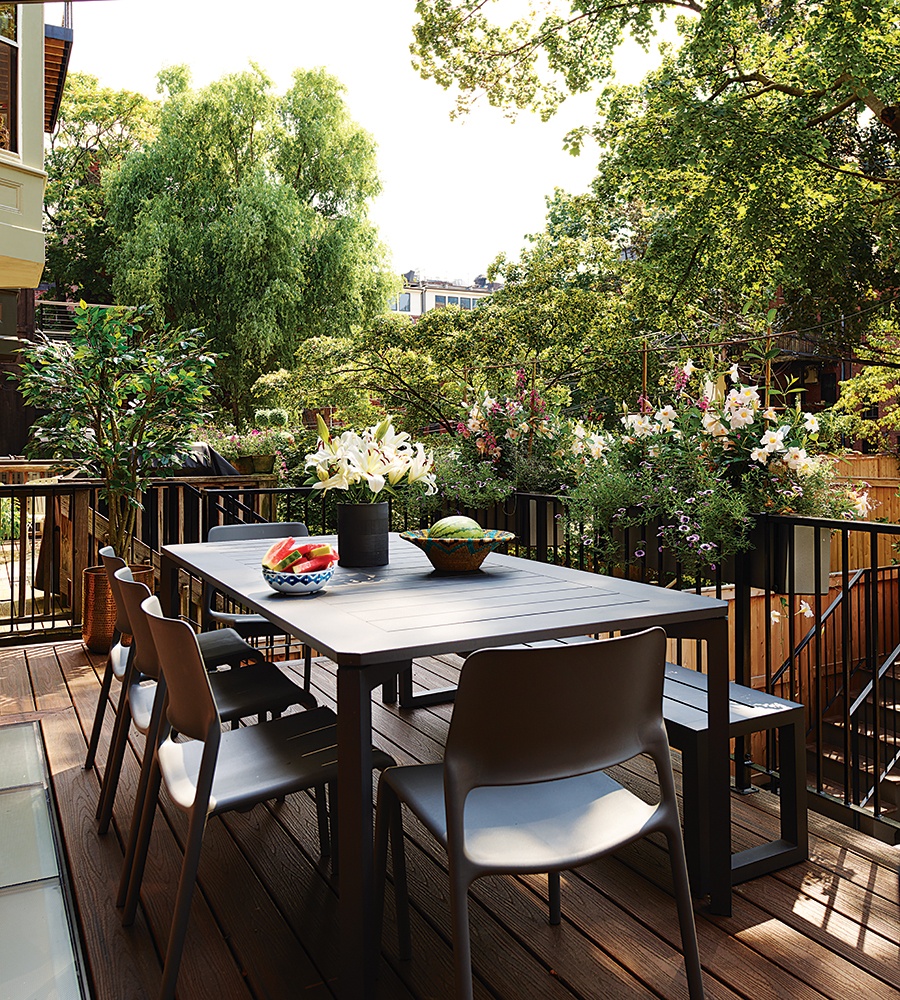 There are many restrictions on what can be done to a brownstone in Boston. “But in the back, you can do whatever you want,” Scales says. In addition to the kitchen’s freshly installed bank of floor-to-ceiling windows, a newly reconfigured doorway leads out to a patio dining area. / Photo by Jared Kuzia

The couple tapped designer Sarah Scales to help rehabilitate the home. “They weren’t trying to reinvent what this brownstone should look like,” Scales says. “They just wanted to celebrate [its] history.” The disjointed layout would not work for a home that would frequently be host to out-of-town family and holiday gatherings. “It was just bizarre,” Scales says of the floor plan. “There were a lot of weird nuances about it…and you know, it was a little unsightly.”

The first step in the renovation process? Calling in a structural engineer and an architect. “We completely reconfigured every floor,” Scales says. With the exception of one structural wall that couldn’t be totally removed (though openings and new doors could be added), the designer and contractors at Cambridgeport Construction got to work on airing out the partitioned spaces and adding square footage.

Making the home friendlier for visitors was also a top priority. The homeowners were hoping to turn the basement into a full guest suite for their parents, which meant excavating two feet down to add ceiling height, ditching the outmoded vinyl finishes, and finding space for closets, a gym, and a small kitchen. On the main floor, meanwhile, the primary goal was to revive and transform two Victorian-era parlors to be beautiful entertaining areas—the one at the back of the home as a media room for everyday hangouts, and the one at the front as a more formal space. Scales preserved the best parts of both; her team cleaned up the impressive fireplaces and restored original plaster molding. 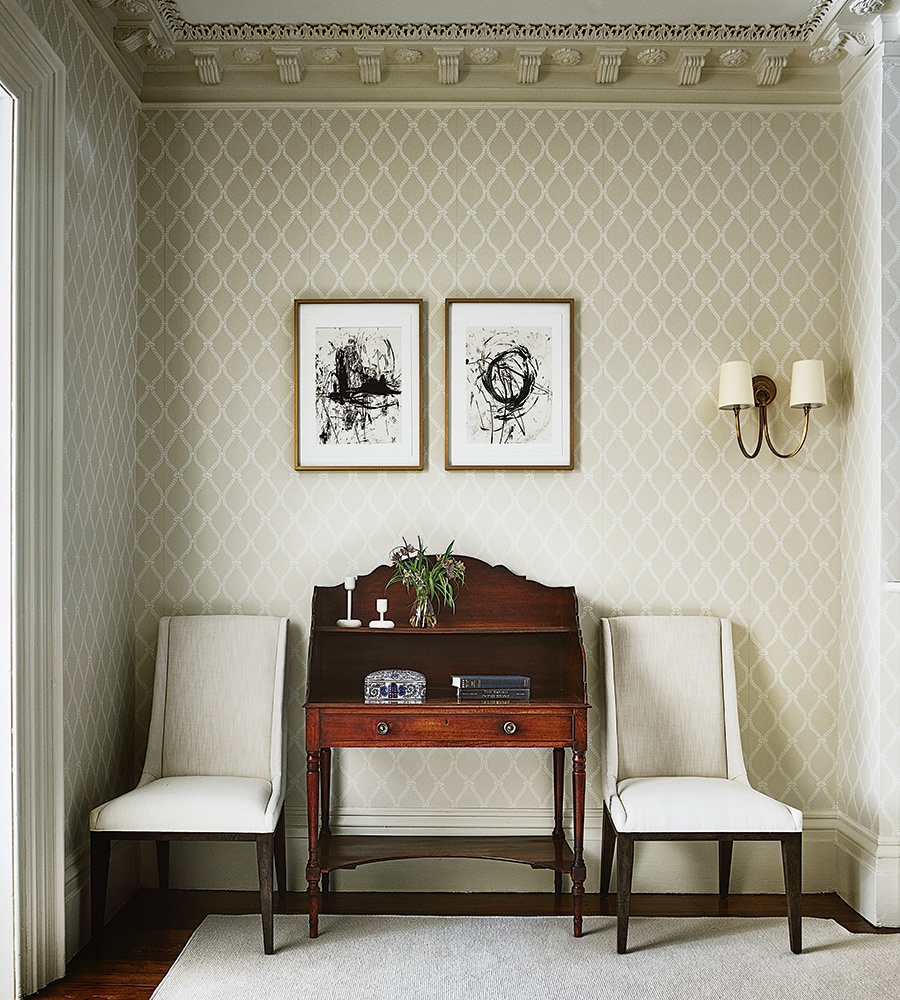 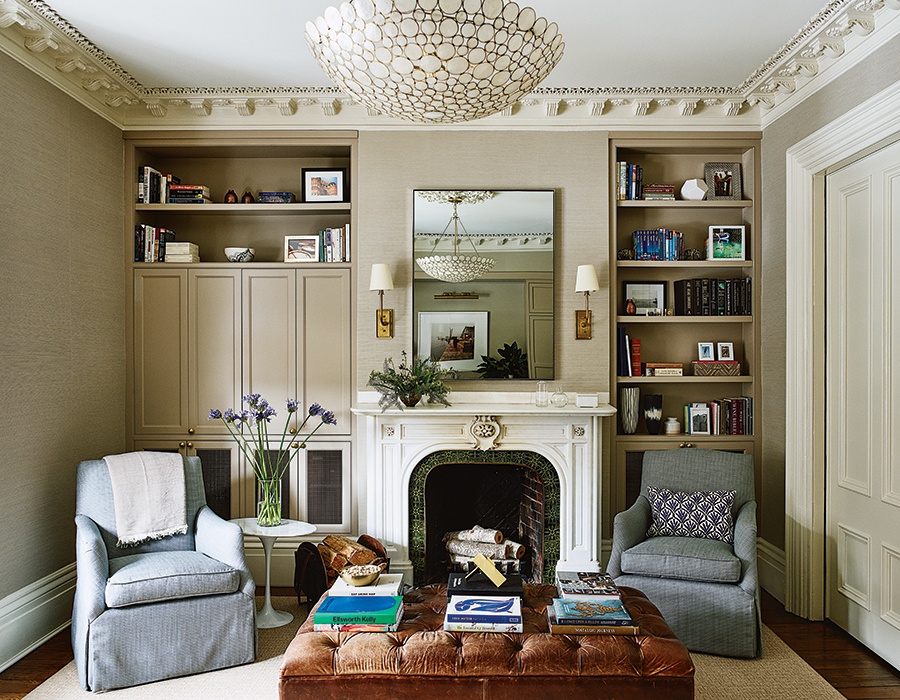 A balance of modern and traditional was key to making the space feel welcoming and livable. In the media room, designer Sarah Scales offset the ornamental fireplace withe the clean, simple lines of the mirror. / Photo by Jared Kuzia 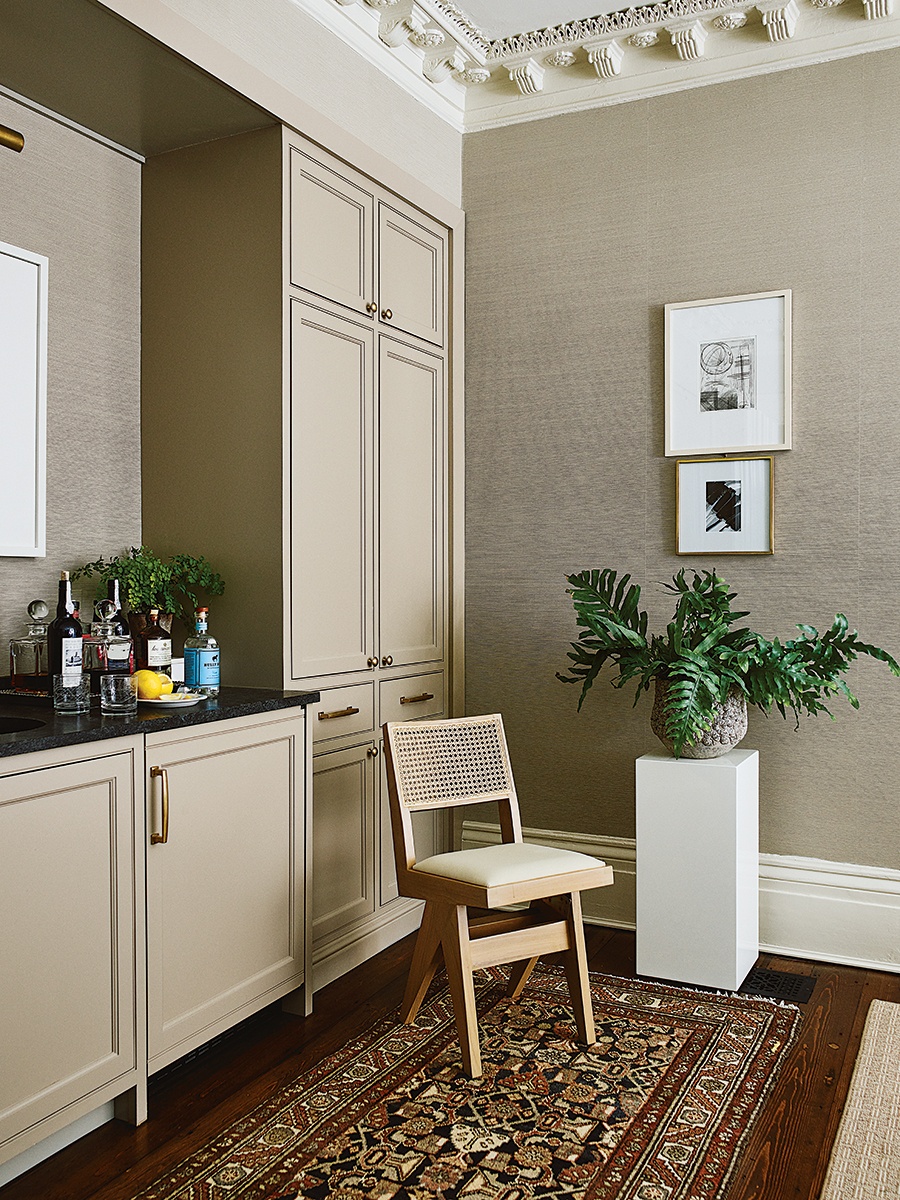 A small minibar in the media room is the finishing touch on a space specifically designed for entertaining. / Photo by Jared Kuzia 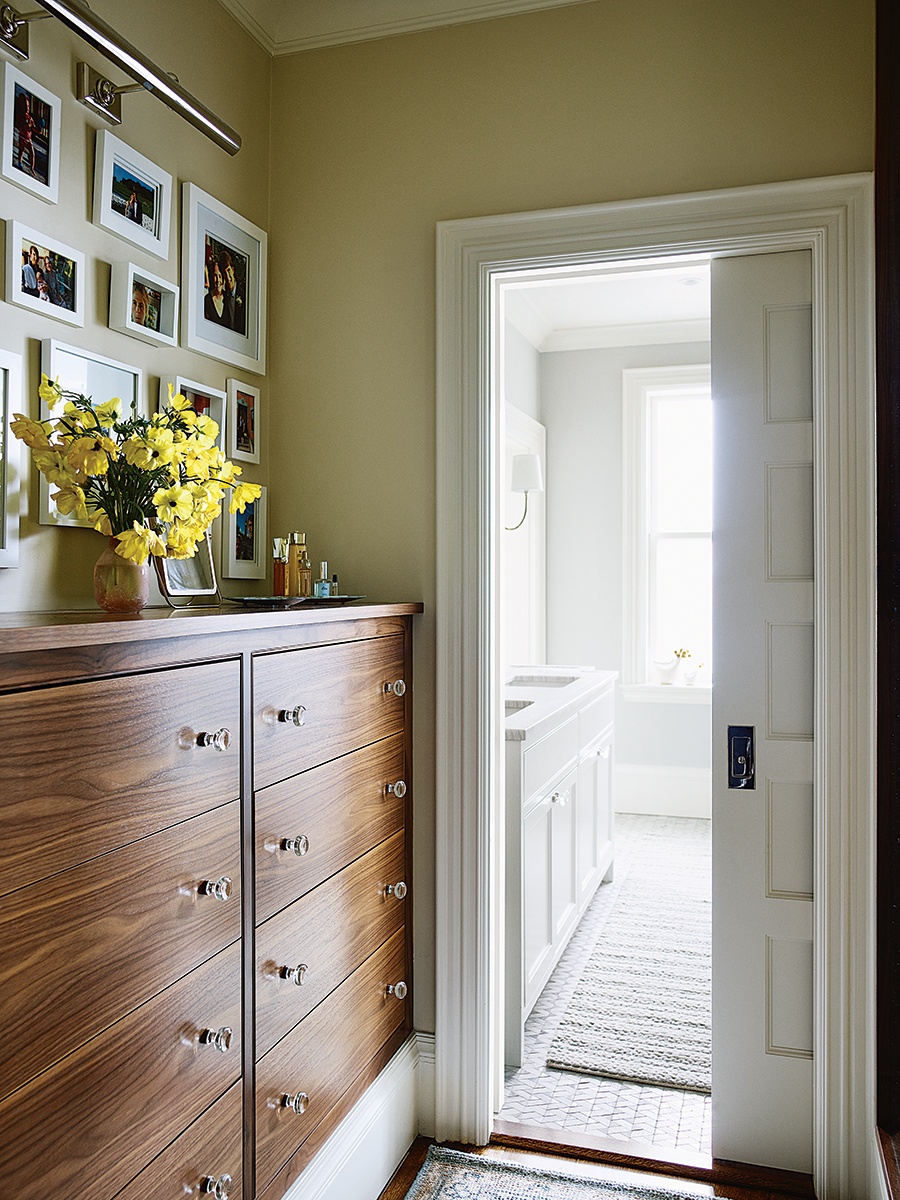 Set outside the primary bedroom’s walk-in closet, a custom walnut dresser pulls double duty as a place to show off nice perfume bottles and family photos. / Photo by Jared Kuzia 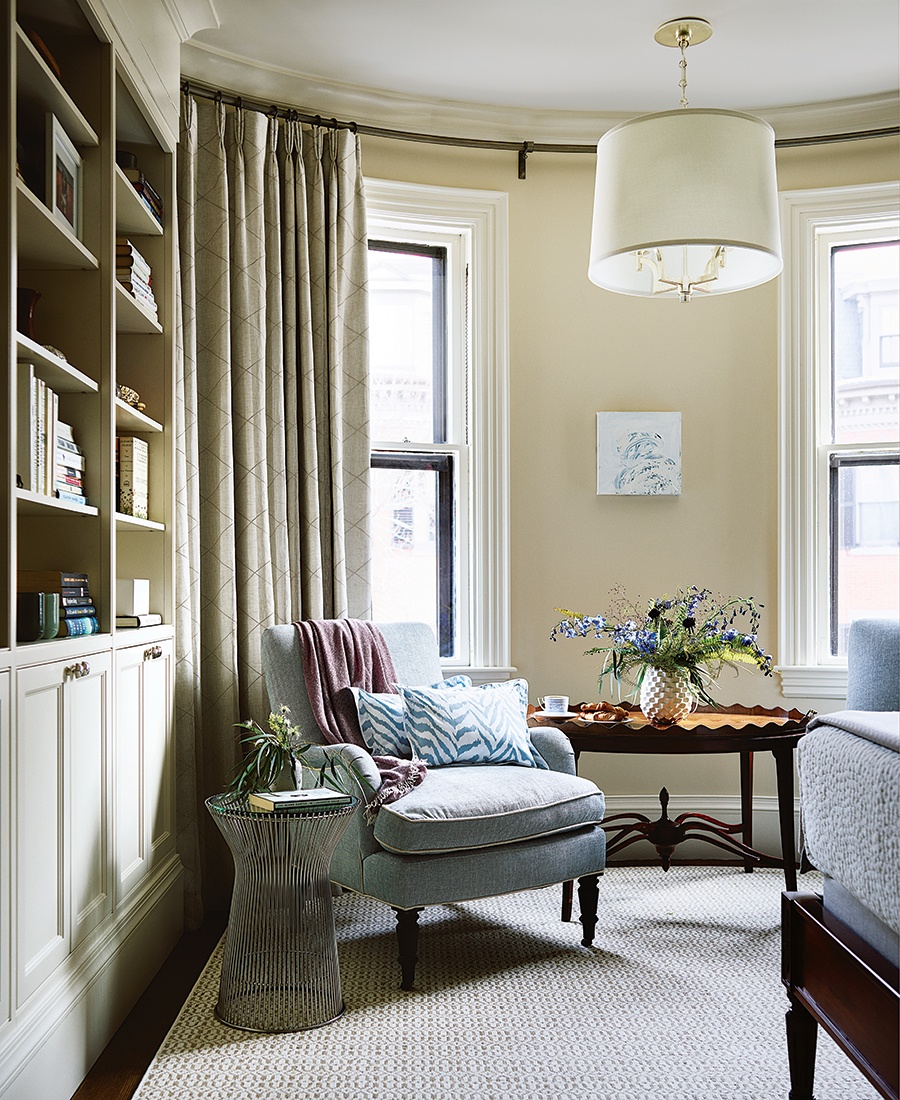 As for finishes, the main challenge would be for Scales to honor the couple’s traditional tastes while not allowing the home to skew into museum territory. That meant timeless colors and prints—a taupe, trellis-patterned Farrow & Ball wallcovering in the formal living room, for example—and classic silhouettes such as the upholstered armchairs from Lee Industries in the primary bedroom and the handsome, tufted-leather ottoman in the media room. To balance the formal feel, Scales added a few modern touches including the media room’s Saarinen side tables, “Tractor” stools from Design Within Reach in the kitchen, and unexpected pockets of color like a grass-green honeycomb tile in the laundry room.

The upper levels, meanwhile, are reserved for bedrooms, with the primary suite on the third floor and their young daughter’s room—plus a guest room—on the fourth. There, Scales was able to play with a little color and whimsy without disturbing the traditional aesthetic of the main floor (case in point: funky Anthropologie rugs and mermaid-blue tile in their daughter’s suite). The fourth floor also includes a play area and a wet bar for stashing juice, snacks, or—for the 21-plus crowd—libations to bring up to their finished roof deck one story above. 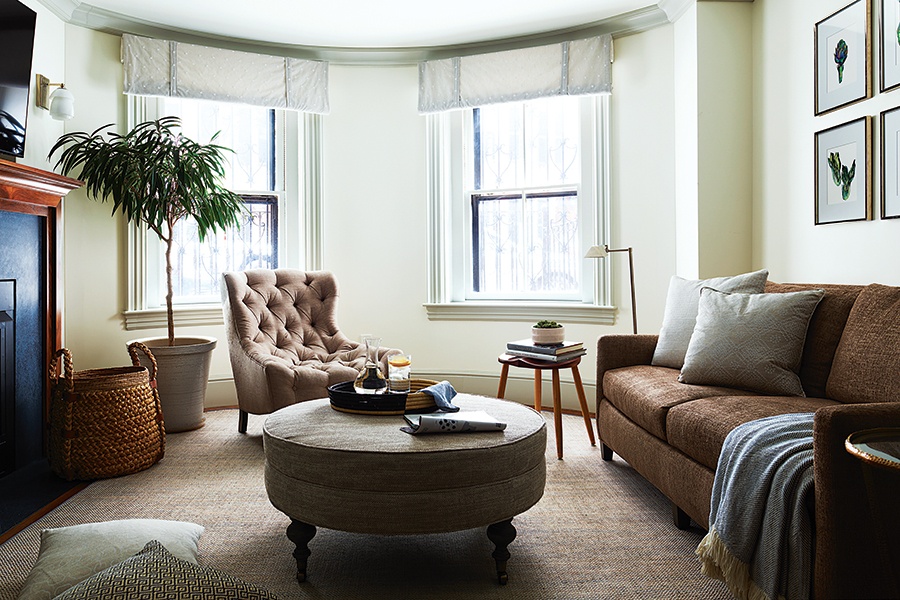 Scales breathed a little life into the family room off the kitchen with a tall ficus from Winston Flowers in Newton. / Photo by Jared Kuzia 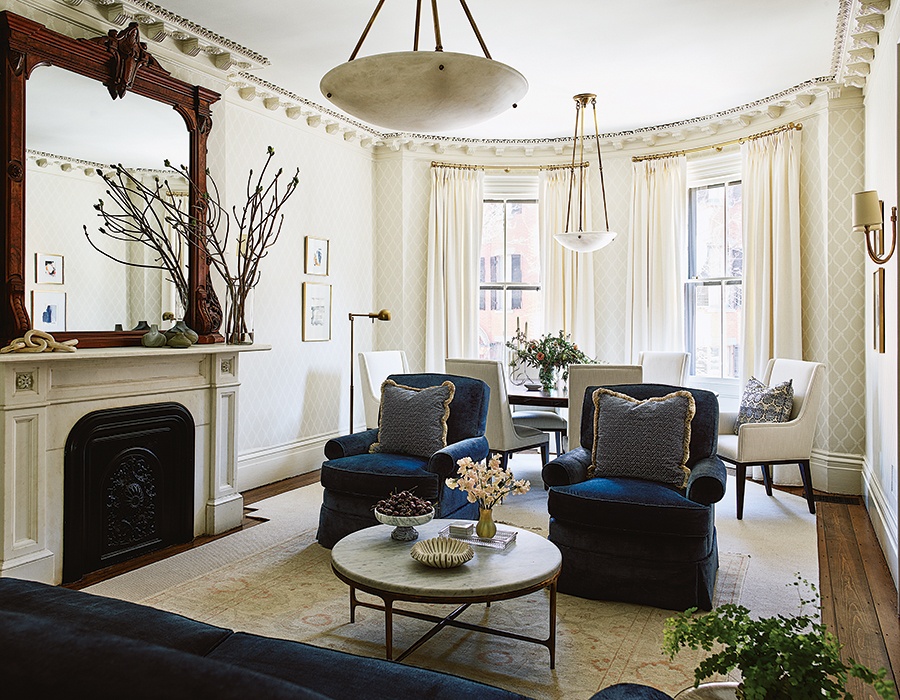 Scales discovered that the owners’ existing dining table fit nicely into the curve of the formal living room’s bay windows. She added a set of RH chairs and a second light fixture above the table so the space felt equally anchored. / Photo by Jared Kuzia 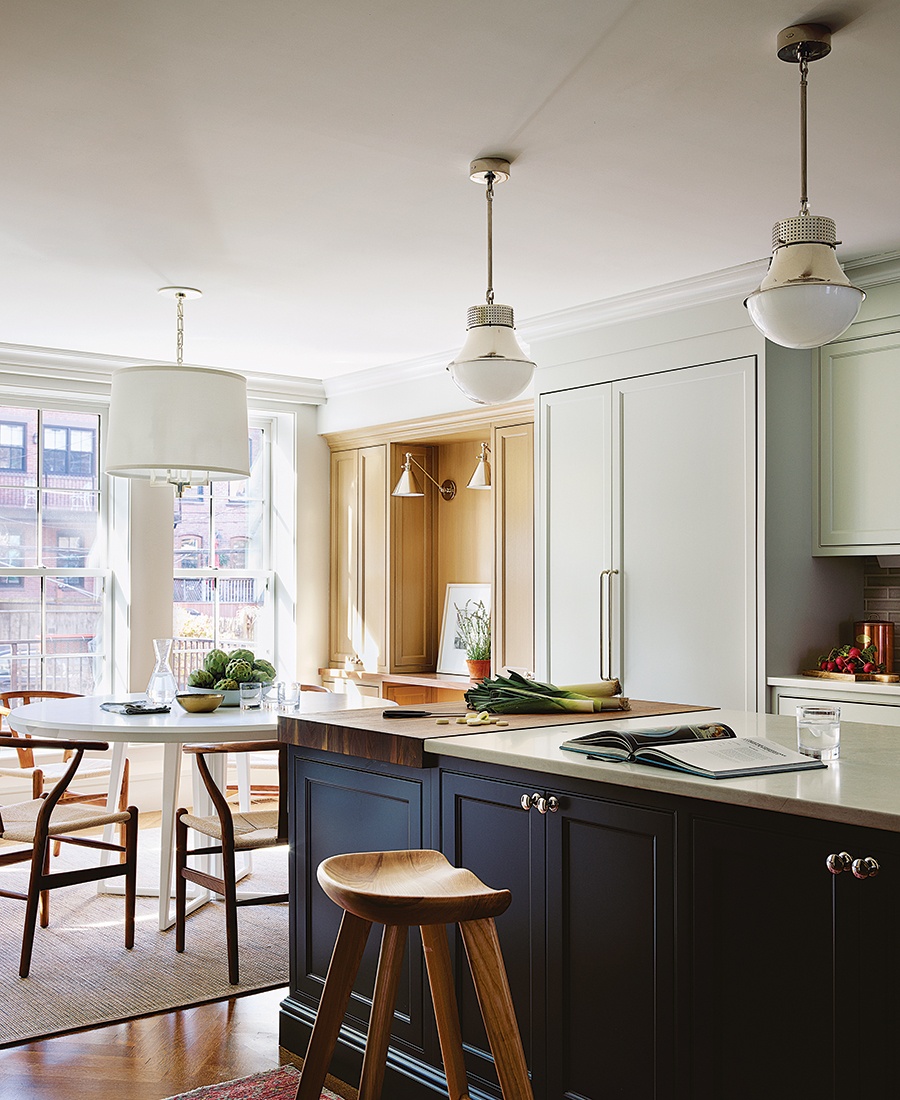 A dining nook splits the space with a natural-oak built-in desk, a must-have for the new era of remote work. “I purposely did it in a different finish so it felt like its own little entity,” the designer says. / Photo by Jared Kuzia 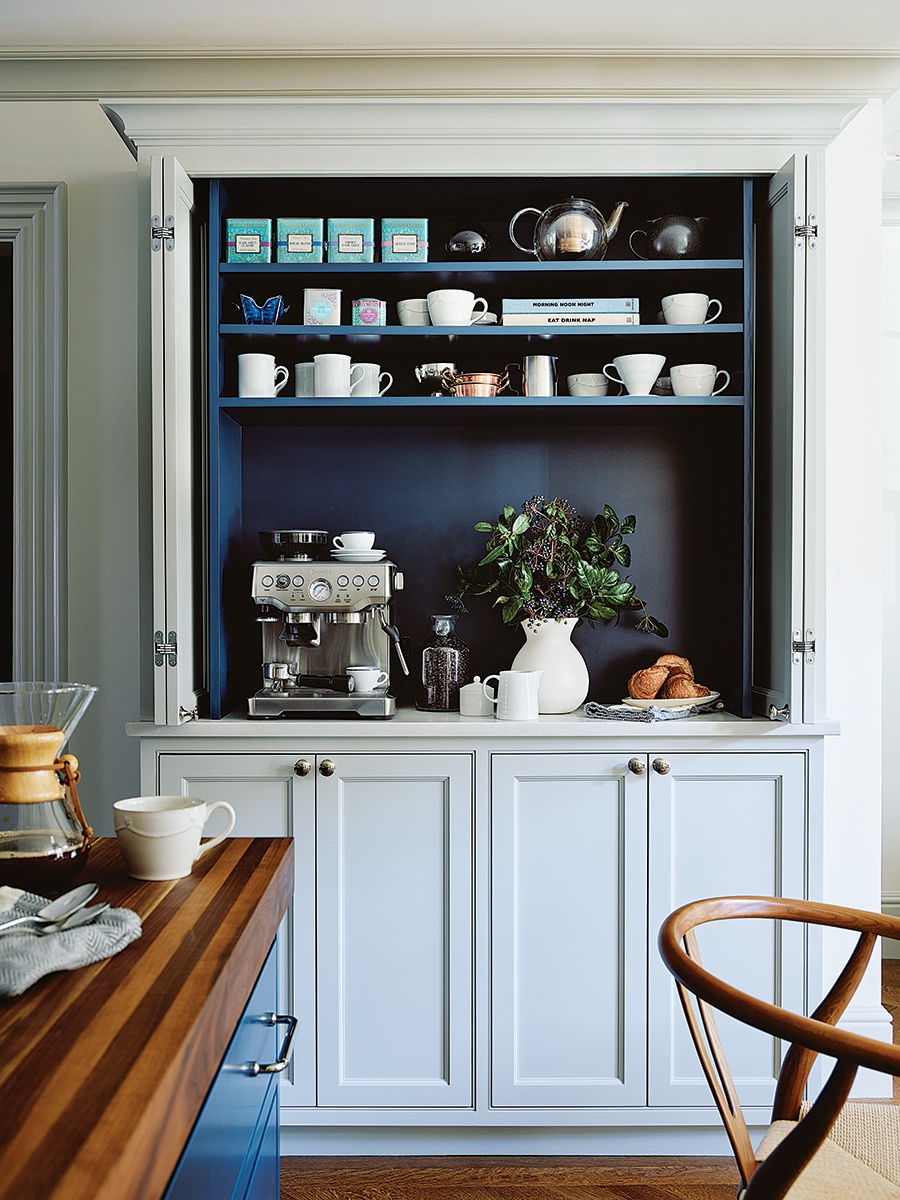 A breakfast bar and a coffee station can be tucked away with pocket doors. “It’s kind of nice,” Scales says. “It can get messy in there, so you can just close it off if you need to.” / Photo by Jared Kuzia 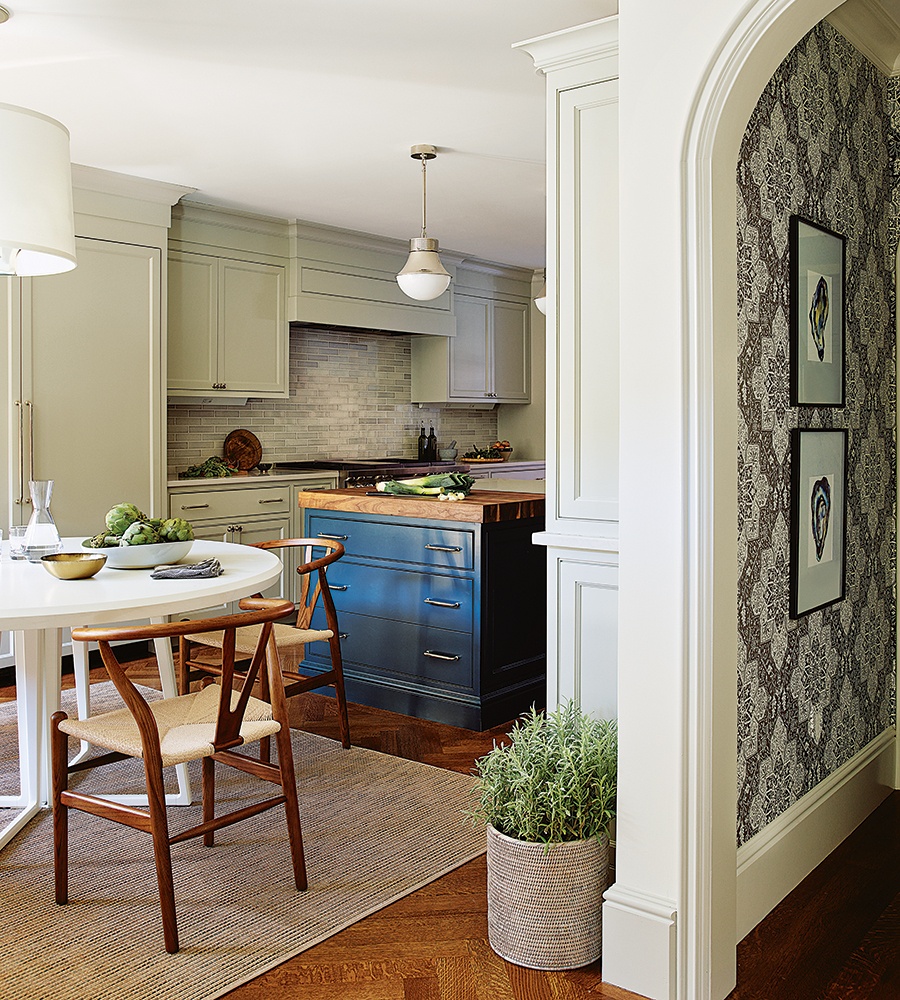 A butcher-block counter sits at the end of the kitchen island. “That’s not sacred,” the designer says. “They actually use it.” / Photo by Jared Kuzia

But the centerpiece of the home is indisputably the kitchen, Scales says. This space was of particular interest to the homeowners, who planned to spend most of their downtime, work time, and entertaining time there. One end of the kitchen boasts a fireplace with cozy armchairs. The other features a built-in desk for remote work and a Serena & Lily dining table with “Wishbone” chairs by a set of five floor-to-ceiling windows (upped from what was originally just two) and a door that leads out to a small private deck and brings in some much-needed light. In the center, meanwhile, the family enjoys a massive island with cabinets painted Farrow & Ball’s “Hague Blue,” a hidden coffee bar, and a walnut butcher-block section for meal prep, which gets a ton of daily use. “We appreciate great food with great friends,” the husband says.

Which, as luck would have it, brings us back to the wine. “There’s this little spot in the basement of all brownstones—it’s sort of a weird closet,” Scales says. “We wanted to transform it into a more usable space.” To house the couple’s wine collection, Scales reimagined this peculiar alcove as a small wine cellar. It wasn’t a big lift—the walls were appropriately made of foundation fieldstone, and the team simply had to clean the room up and add wine racks and a temperature-control system—but it’s a unique touch that makes the home truly personalized for the new owners.

The renovation was finished during the pandemic (Scales had to take the couple furniture-shopping on Zoom a few times), so it’s full entertaining potential hasn’t been realized just yet. But the homeowners say they’re looking forward to the first gathering in their new space. And what better way to celebrate the unveiling of your revamped historical home than by uncorking a vintage bottle? 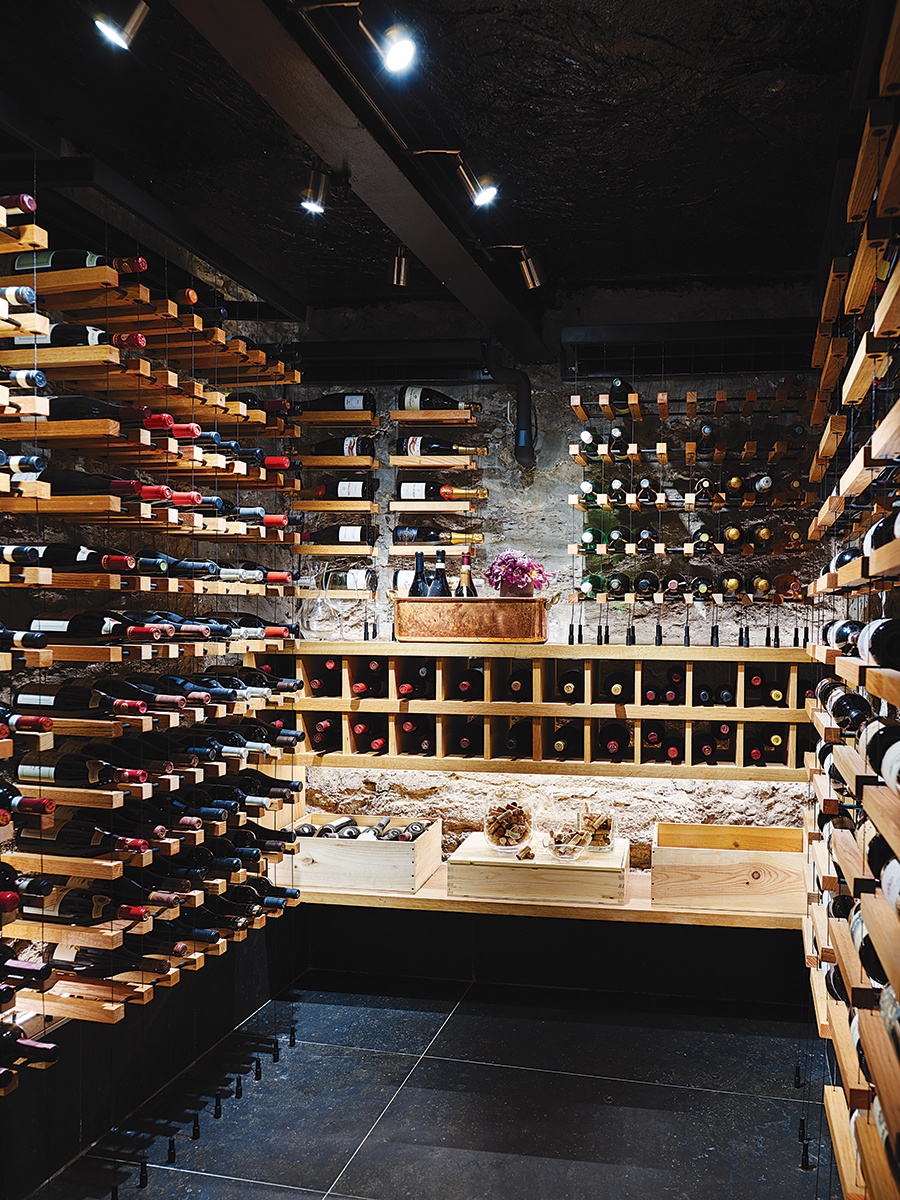 A temperature-controlled wine cellar in the basement houses the couple’s collection. / Photo by Jared Kuzia 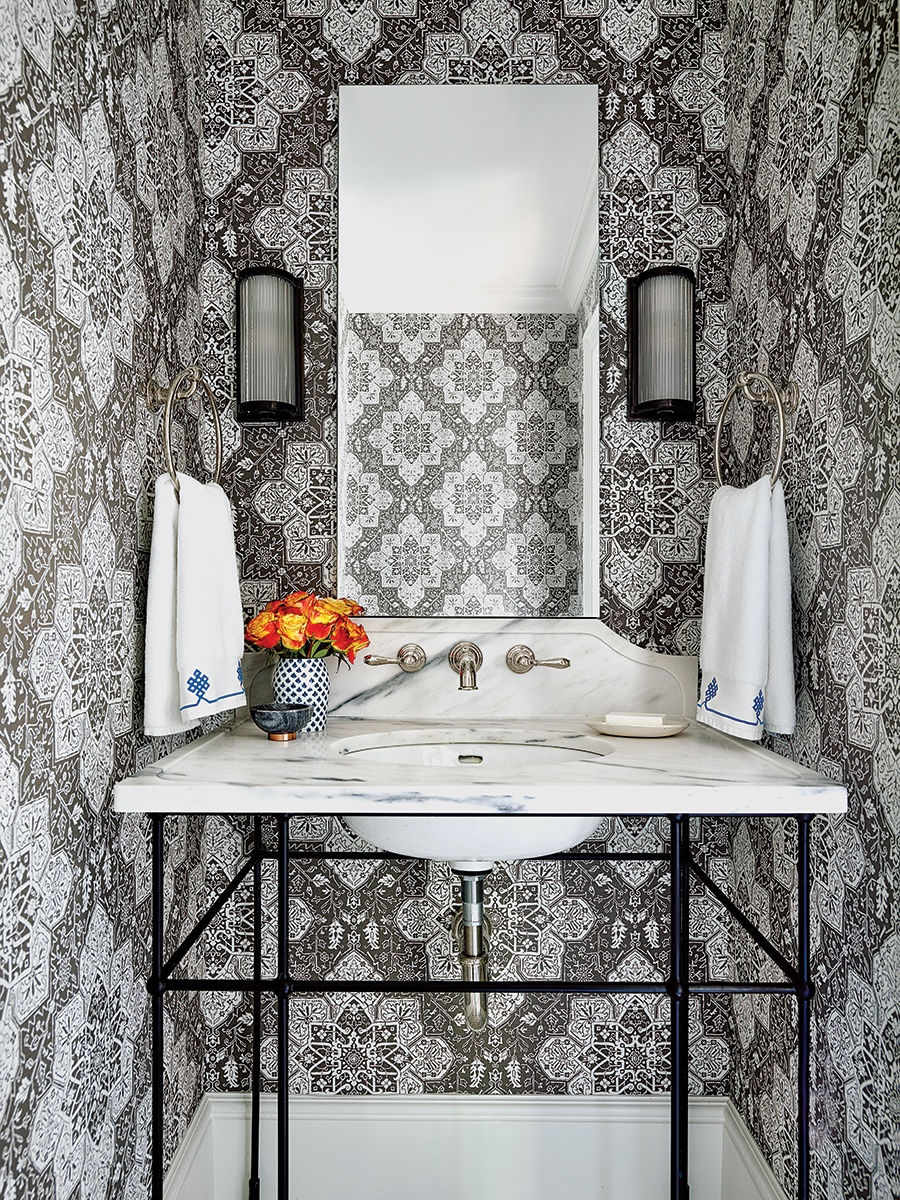 Thibaut’s “Tarragon” wallcovering adds a pop of bold pattern in the powder room off the kitchen. / Photo by Jared Kuzia 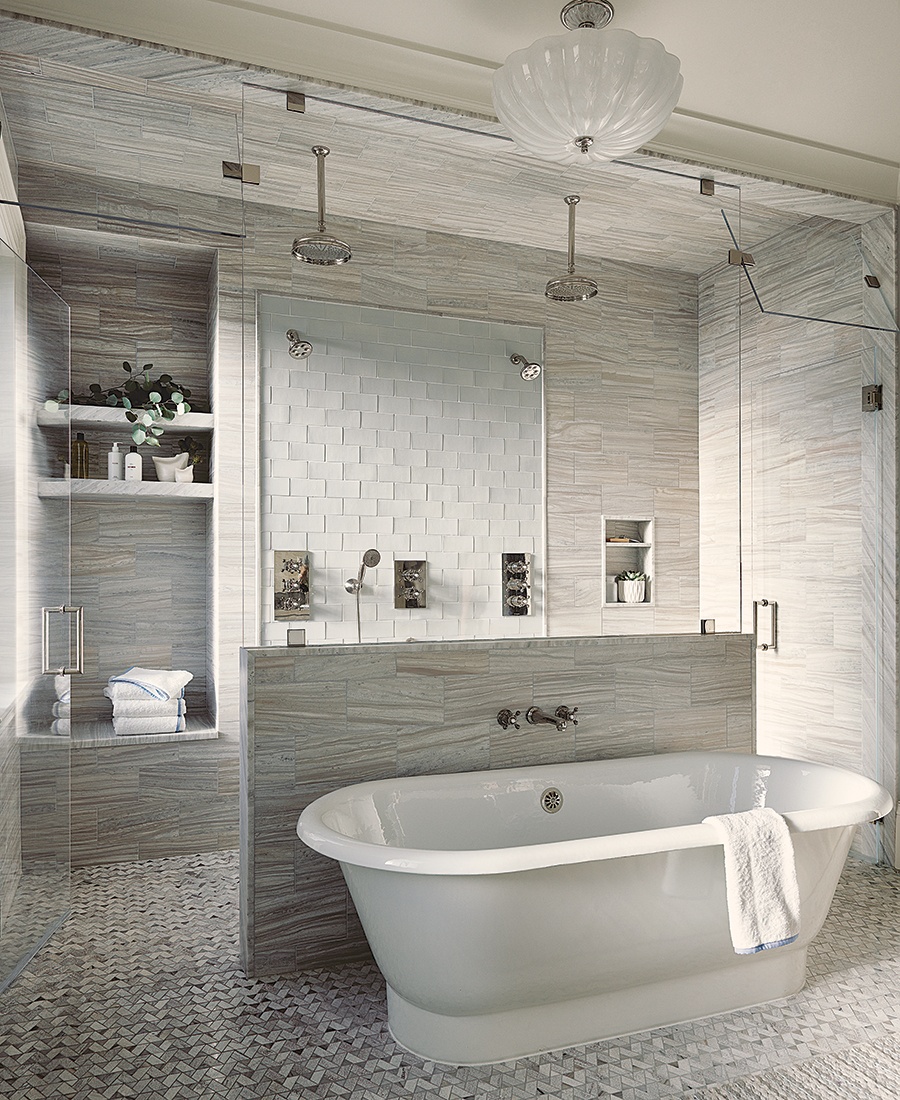 A curbless, his-and-hers dual-entry shower sits behind a Waterworks soaking tub. “I feel like it matches the grandeur of the house,” Scales says. / Photo by Jared Kuzia 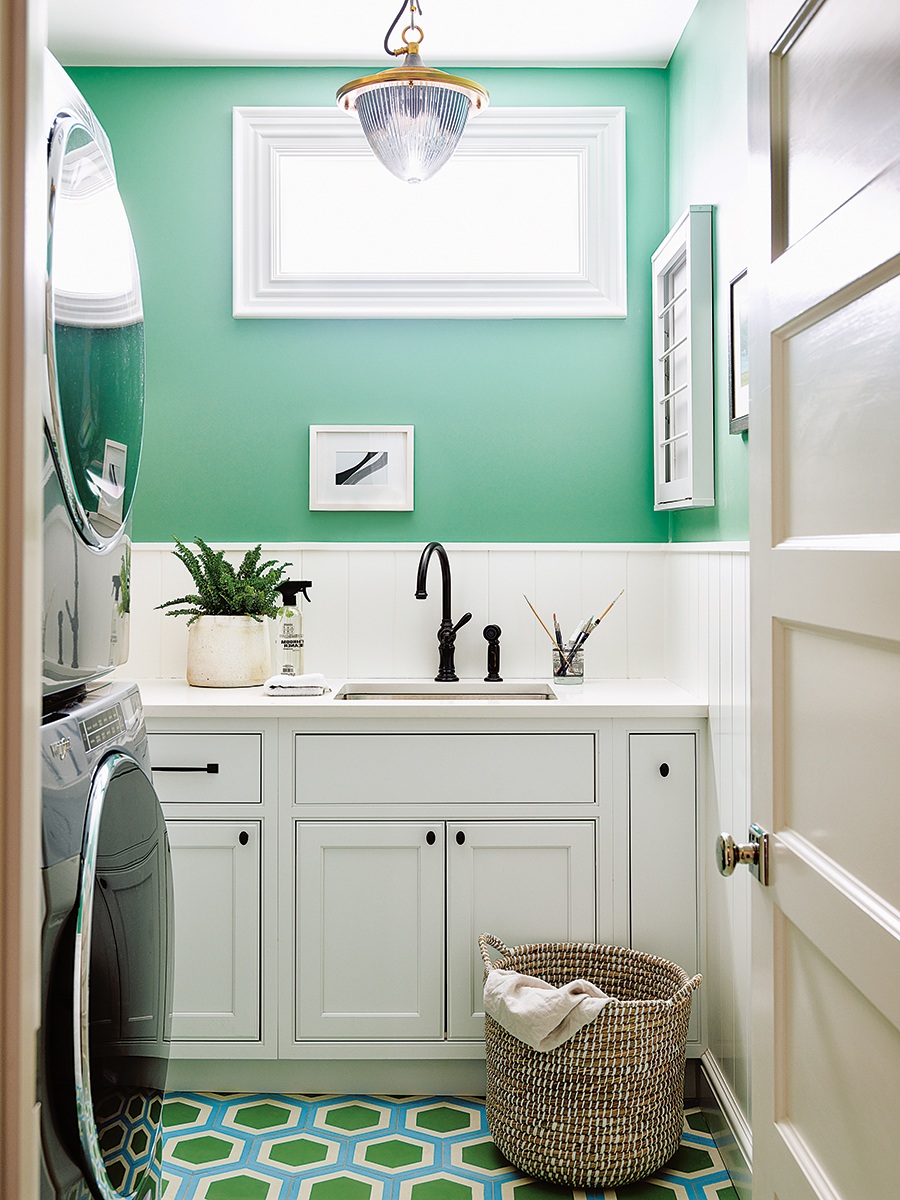 Green paint and colorful flooring from Discover Tile enliven the laundry room. “Homeowners are more likely to do fun finishes in small, specific areas,” Scales says. “If I had proposed this for the primary bathroom, they would have been like ‘No way.'” The owners can choose to close this room off or live with the door open, depending on their mood. “It’s kind of like having a double-sided pocket square,” the designer adds. / Photo by Jared Kuzia 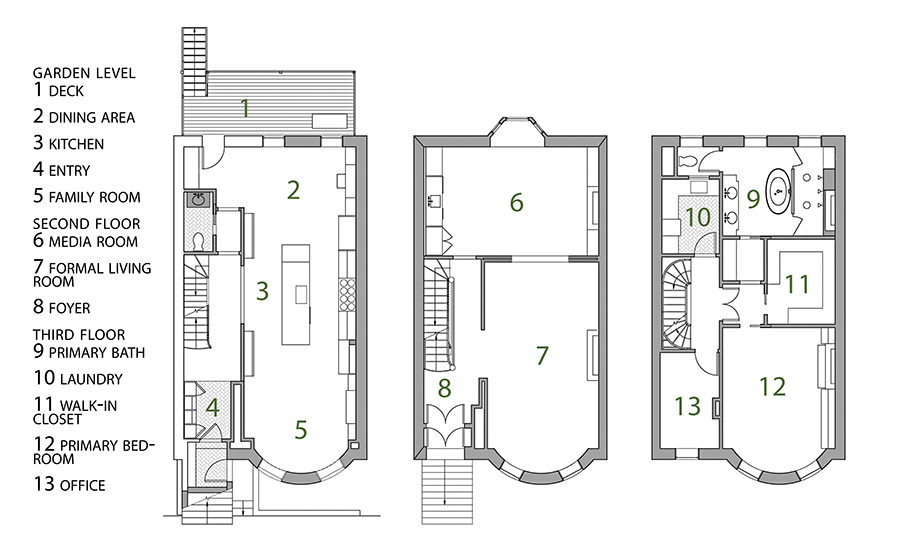 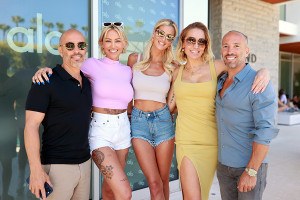 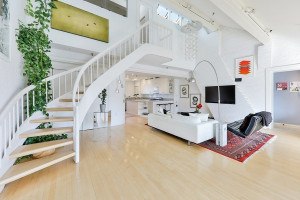 On the Market: A Rare Penthouse Unit on the Waterfront 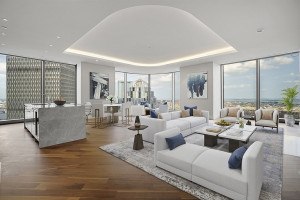 On the Market: A Four Seasons Condo with Views Out to Cape Cod