WHETHER OR NOT YOU ENJOY Journeyman comes down to this: how much you like being told what to eat, and if you believe in dinner as performance art — watching the creative process unfold with every course. Whether or not, that is, you are happy to enter someone else’s imagination and accept what that imagination has dreamed up.

Tse Wei Lim and Diana Kudajarova, the husband-and-wife chef-owners, want you to enjoy spending an evening in their hands. That means surrendering to the menu they’ve devised for the week, making no choices beyond “omnivore” or “vegetarian”; three ($39), five ($65), or seven ($85) courses; and set beverage pairings ($25, $45, and $65) or wine by the glass. (They also offer wines by the bottle; spirits, apertifs, and digestifs by the glass; bottled beers; cocktails; house-made sodas; and teas and coffees, which are all a la carte.)

The story of Journeyman is appealing on paper — or rather, on the couple’s blog, which detailed the inevitably expensive, delay-ridden months of converting an airy space in Union Square from a pasta-sauce factory to a restaurant. The two have also written about visiting with farmers and conducting “pork-off” tastings. About repairing the front wall of windows and planting a vertical garden for the kitchen. About buying equipment. (“I like saying Hobart. Try it! You’ll see!”) It was impossible not to be swept up in Lim and Kudajarova’s excitement as they built to the long-anticipated opening in September.

A pity, then, that such enthusiasm and warmth don’t translate to dining at Journeyman. Or at least they didn’t when I tried the menus from two different weeks in the dead of winter. Could it have been the cold weath 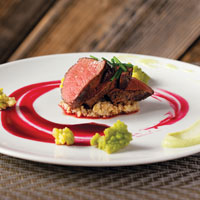 er that made cooking to the local-seasonal ethic the owners embrace a near impossibility? Or the endless questions that flummoxed our well-meaning server, who frequently confused orders and, rather than answer those questions, retreated behind Journeyman’s intent that the menu “conceal and reveal” surprises on the plate? All of the above, perhaps. But I left with the impression that what the constant reworking of complicated, multilayered dishes really conceals and reveals is a couple teaching themselves how to cook.

Control-freak, retrograde, what-you-see-is-what-you-get literalist I may be. But the most exciting and memorable meal I’ve had in recent years was at Grant Achatz’s Alinea in Chicago, where the menu format and three-word dish listings — which veil bold experimentation — seem to be the model for Journeyman. I’m sure the young chefs, as technique-minded as they are, would never dare compare themselves with Achatz. How he came to be so bold, though, is telling: He worked for four years at the French Laundry, and could follow each rule to the letter before breaking it — a requisite of the form.

But back to the Journeyman experience. A few of the dishes had wonderful flavor — revelatory, even. Lamb shoulder braised for hours until spoon-tender, served with a bright-flavored green herb sauce, was succulent, and the pairing with Parisian gnocchi — not potato, but a cheesy cream-puff batter piped into boiling water and then crisped in butter — was so good I wanted a double portion. The green sauce on the lamb, made with lots of fresh herbs, wasn’t loosened with enough oil to keep it from seeming grassy, but it enlivened the dish. Thick-cut duck breast had extraordinary flavor — it could have doubled for filet mignon, except with far better taste—and was stunning, topped with a huge home-pickled watermelon radish. The crisp acidity of the pickle against the steaky duck, and the sweetness of Gilfeather turnip purée, made for another noteworthy plate. 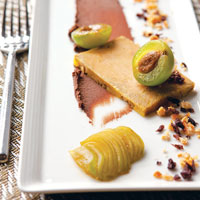 Those, unfortunately, were the exceptions. An order of pork loin had almost no flavor and was in dire need of the homemade sauerkraut to its side. The fish in “salmon, chives, vichyssoise” was similarly bland, the salmon slow-roasted and served with sautéed fresh bulbs of garlic chives and a translucent brownish sauce the server identified as the vichyssoise. “Doesn’t that have cream?” I asked. No cream, he said. “Well,” he added helpfully, “it has ginger.” Indeed, it was a potato-leek sauce with ginger juice — more interesting, at least, than the salmon, but unappealing to look at. (Even more unattractive: a dark-brown smear of coffee crème anglaise beneath a dessert of slab-white coconut panna cotta and good coconut pound cake.)

Dishes often seemed like haphazard, fiddly works in progress. One on the vegetarian menu made with butternut squash was a thick custard flavored with cocoa nibs and prettily baked in a wide, shallow coffee cup. But one week the custard was served cold and hard with a miso foam; the next week it was served warm with a cool milk foam spiced heavily with nutmeg, ginger, cinnamon, and clove, and had grated candy-cap mushrooms on top. Neither combination worked. The custard was better cold and firm, but bland all the same, and the miso was a strange choice to put on top of it. The spices in the milk foam were a more successful match, but the warm texture and mushroom bits were unpleasant. One week the vegetarian “wheat berries, kohlrabi, cheese” was enriched with butter and triple-crème French cheese; the next there was just as much cheese — but it was a pungent, salty blue that overwhelmed the offering, making it almost impossible to eat.

And some things were just plain odd, such as agnolotti made of papery, near-raw pasta dough filled with homemade lardo and puréed confit tomato served in a salty chicken consommé with razor clams, oysters, and littlenecks—an item opaquely called “bivalves, agnolotti, chicken.” And the pork-trotter ballottine? It had a marvelous crisp skin and tender nuggets of pork but an overspiced and terribly dry forcemeat. Both dishes gave more an impression of enthusiasm than experience. 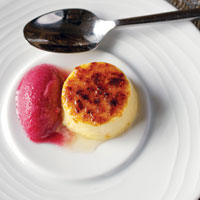 All that said, there’s more than good will and a keen sense of style at work at Journeyman. The room is cool but comfortable, the window garden lovely to see, and the staff believers in the mission. Kudajarova is a terrific bread baker, specializing in the dark and whole-grain loaves of her childhood in Latvia. The chefs are good with pickles and, often, meat. They obviously like cooking and have put their heart into the restaurant. Maybe what they need is an extended tryout, during which they keep making the same dishes till they’ve got them just where they want them, rather than the weekly fiddling. For now, I’ll wait a while as the two hone their skills. Maybe that tryout will coast to its natural conclusion right as the farms they so much want to support come into their abundant peak — on Journeyman’s first anniversary.