Eat the Fish of the Future All Winter at Row 34

Chef Jeremy Sewall has partnered with the University of New Hampshire to serve local steelhead trout—farmed in a unique, environmentally sound system—at all five of his Boston-area restaurants. 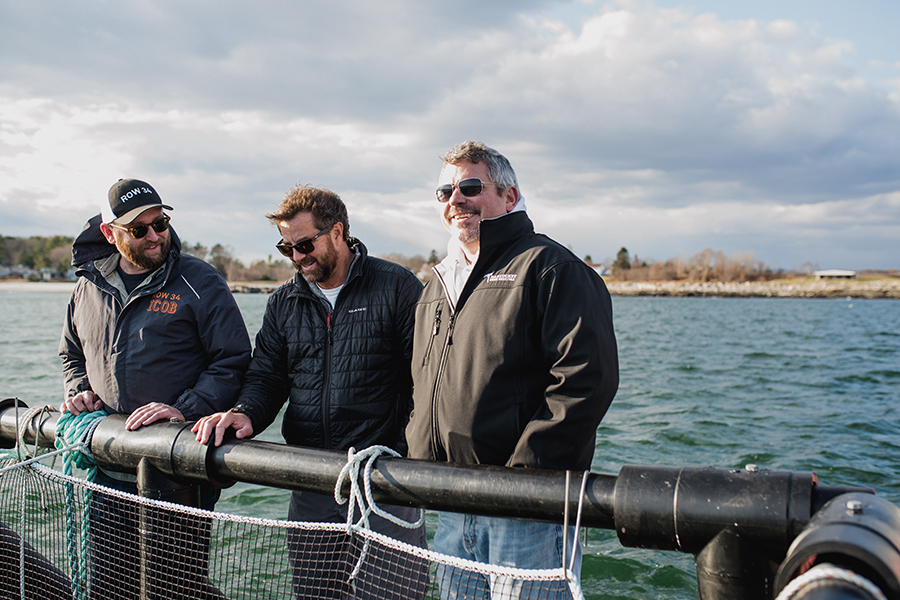 Phil Peterson’s phone buzzed once. The message was a screenshot of a beautiful steelhead trout, shared by New York City seafood restaurant Greenpoint Fish & Lobster Co., which said the fish was grown in—of all places—New Castle, New Hampshire. The shot was accompanied by a note from Peterson’s boss, chef Jeremy Sewall, and it basically said, “Find me this fish!”

Pictured was a filet, next to a good-sized whole fish. The trout was probably between four and five pounds, Sewall estimates. And it was in great shape—its vibrant skin showed intact scales, its flesh was a bright shade of orange.

Plus, “I was really intrigued by the fact that it was grown in New Hampshire,” he says. Long an advocate for the New England seafood industry, Sewall comes from a family of York, Maine-based lobstermen, and now co-owns Island Creek Oyster Bar in Boston and Burlington, Row 34 in Boston and Portsmouth, N.H., and Les Sablons in Harvard Square.

Peterson is the head purchaser for all of these restaurants—finding quality ingredients for Sewall is his goal. (He jokes he’s Sewall’s “enabler.”) The Instagram post had just enough information to lead him to a trout aquaculture project—aka a fish farm—less than three miles down the Piscataqua River from their New Hampshire property. 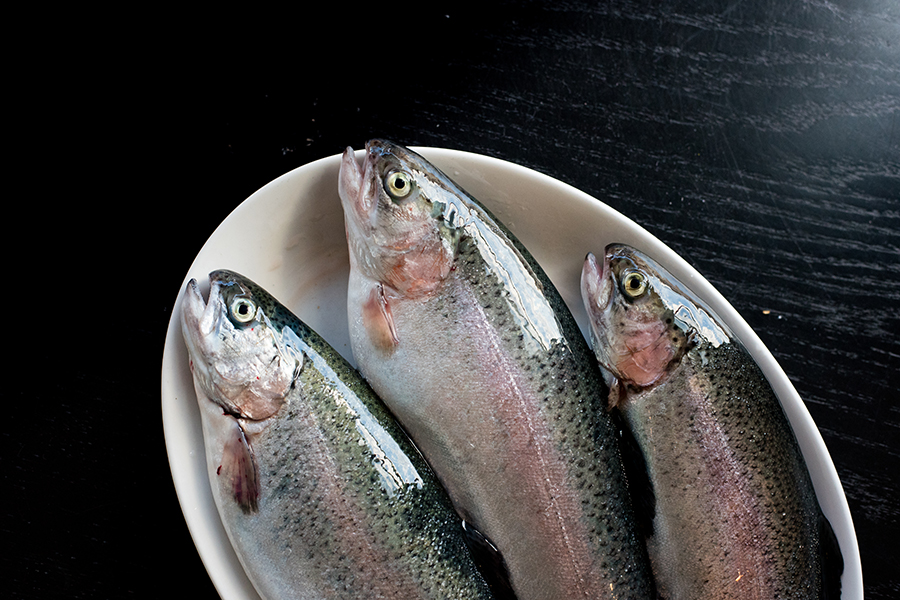 Steelhead trout are the saltwater siblings of freshwater-dwelling rainbow trout. Though they can live in fresh or saltwater, steelhead are not native to New England. But in 2014, the University of New Hampshire Cooperative Extension, in conjunction with the government-funded N.H. Sea Grant, debuted a unique way of raising these salmon-like specimens with no environmental impact, just offshore from their New Castle base.

It’s a small-scale form of what’s known as integrated multi-trophic aquaculture. That means it’s a way of raising several different species simultaneously, in an ecologically balanced way. Picture this: Floating just about a mile from the UNH Marine Research Pier are two 15-foot-by-15-foot net cages, containing a total of about 3,000 steelhead trout. The enclosures holding the fish are surrounded by dozens of lines of sugar kelp and mussels, two species that use as energy the environmentally harmful nitrogen that the fish excrete as waste. The natural biofilter doesn’t just mitigate the impact of raising fish, whose feed contains nitrogen, but it’s made from species that actually benefit from it themselves.

Think of it as “a kind of raised bed of fish farms,” says project manager Gunnar Ek. “It’s not really big, it’s not super efficient, but it doesn’t have any negative impact on anything. We can manage it really easily.”

And it’s humane. Though they’re confined in the inshore enclosure, the fish have ample space to swim around, Ek adds. They are hatched in a lab in Ossipee, about 60 miles north of New Castle, so they never leave New Hampshire—at least, until they get to Boston or Maine restaurants. 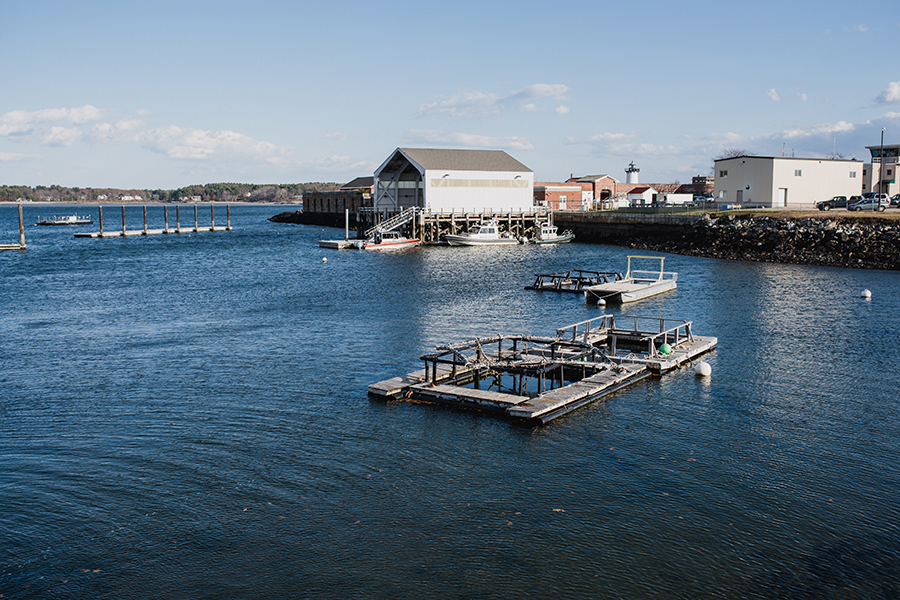 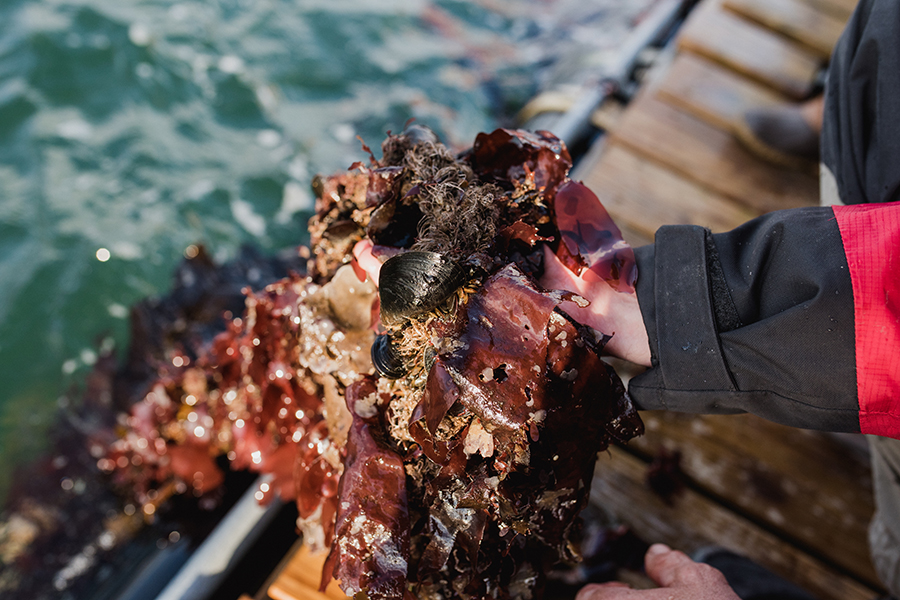 A line of mussels and sugar kelp. Dozens of these lines surround the steelhead trout enclosure and absorb any nitrogen the fish excrete, resulting in a net-neutral aquaculture farm. / Photos by Emily Hagen

Made from commonplace PVC pipes, pressure-treated wood, and nylon netting, the setup doesn’t require any of the cranes, pumps, conveyor belts, or other technology seen in larger-scale fish farm operations. It’s a small footprint in the ocean, and it’s low-tech enough that it could be adopted by New England fishermen—and even folks elsewhere—to supplement their income in a changing ocean, says aquaculture specialist Michael Chambers.

Take lobstermen, for example, who travel offshore daily to check on their traps. They could stop by their farm like this to feed the fish, Chambers says, and in season, harvest a few fish on their return trip to the docks and bring them to market with the day’s catch of lobsters.

For Chambers, expanding marine farming in the U.S. has long been the goal. He says government regulations have been a hurdle for the work he’s done for decades, with a main concern of the Environmental Protection Agency being too much nitrogen emission from fish farms so close to nutrient-rich shores. So any success this low-impact prototype sees helps marine researchers like himself prove that aquaculture is viable here.

“We all know the problems. Ninety percent of our seafood comes from overseas, we’re not sure how it’s handled. [The U.S. does] an incredible job of farming on land—we could do the same in the ocean if we were allowed to,” Chambers says.

This steelhead trout system is something Chambers and his team of researchers and grad students developed over several years. They tried other types of fish—cod, halibut, haddock—but steelhead trout proved to be the best because of their fast growth rate, he says. The kelp and mussels aren’t designed to be harvested, like the steelhead. But the researchers sold last year’s kelp to the Portsmouth Brewery, which made a seaweed beer out of it called Selkie. 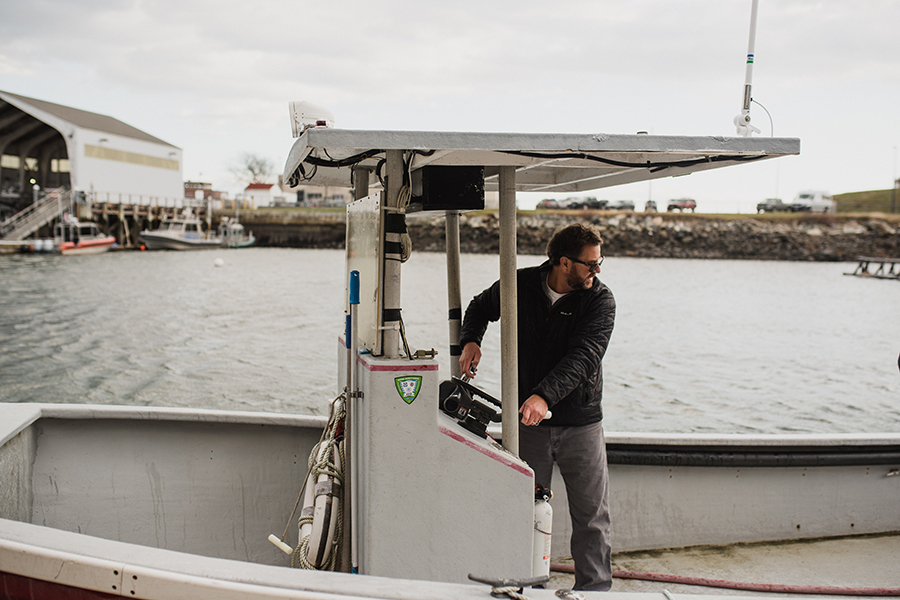 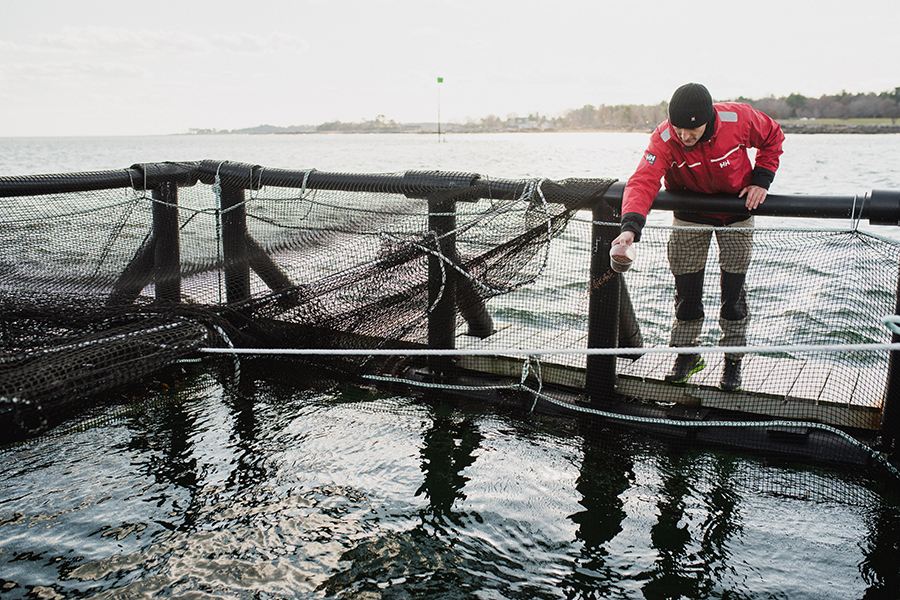 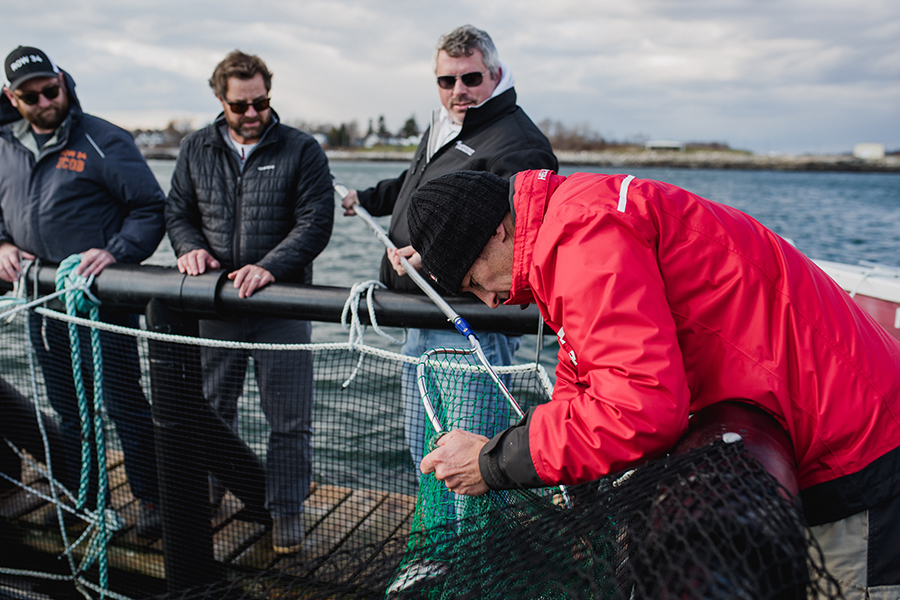 Last winter, Peterson reached out to the researchers and ordered as much of the product as he could—which was only enough steelhead trout to be an addition to the menu for a few nights at Row 34. The chefs (and their guests) were incredibly impressed with the quality of the fish, Peterson says, so he called UNH back and said he and his boss wanted to come check out their operation in person.

The request wasn’t entirely new—education is a big component of Sea Grant’s mission, Chambers says. But while he had taken chefs out to see the setup before, and had sold almost all of the steelhead he’s raised to restaurants in New Hampshire and beyond, Chambers hadn’t met anyone as excited about his work as the Row 34 team.

So Sewall decided to quite literally put his money where his mouth is. His restaurant group kicked in some funding for this year’s steelhead project (Sewall declined to share how much they invested), and has become UNH’s first-ever restaurant partner. The chef and his team have been closely involved with the project all year long, visiting the farm at least once per week for several months.

Some of this year’s 1.5-ton trout harvest will be sold to Seaport Fish of Rye, N.H., and distributed among its Seacoast wholesale partners. But Sewall’s restaurant group will reap most of it. Expect to see New Hampshire-raised steelhead—and its roe, and hopefully its belly, if the fish get plump enough—at all five restaurants, beginning later this month and lasting into February 2018.

Sewall knows he can buy cheaper, still high-quality, farmed salmon from Norway, the Faroe Islands, and other regions. He buys a lot from Maine already, he says. But he’s particularly keen on supporting, and promoting, the New England seafood industry, and he can do that directly by helping UNH continue its educational research. Though he’s hesitant to use the often misused buzzword “sustainable,” this steelhead trout is actually raised in a sustainable way, Sewall says.

“The product is superb. How they’re [raising the fish]—the density in the pen, the feed, the care they’re given—is evident in the final product, just like anything you grow,” the chef says.

New England’s fishing industry, one of the country’s oldest commercial trades, is facing urgent challenges in the warming ocean. And simultaneously, consumers continue to care deeply about where their food comes from. Besides the fact that he truly loves “growing things in the ocean, just like some people like to have gardens,” Chambers is motivated to solve these problems, he says.

And so is Sewall. “We make the best choices we can, with the information we have and the product that’s available,” he says. “In my opinion—and I fry fish for a living—aquaculture is going to be incredibly important for my industry in the future. It has to be, because the way we harvest the ocean, the fish aren’t going to be there forever.”