And so is his attention to detail. 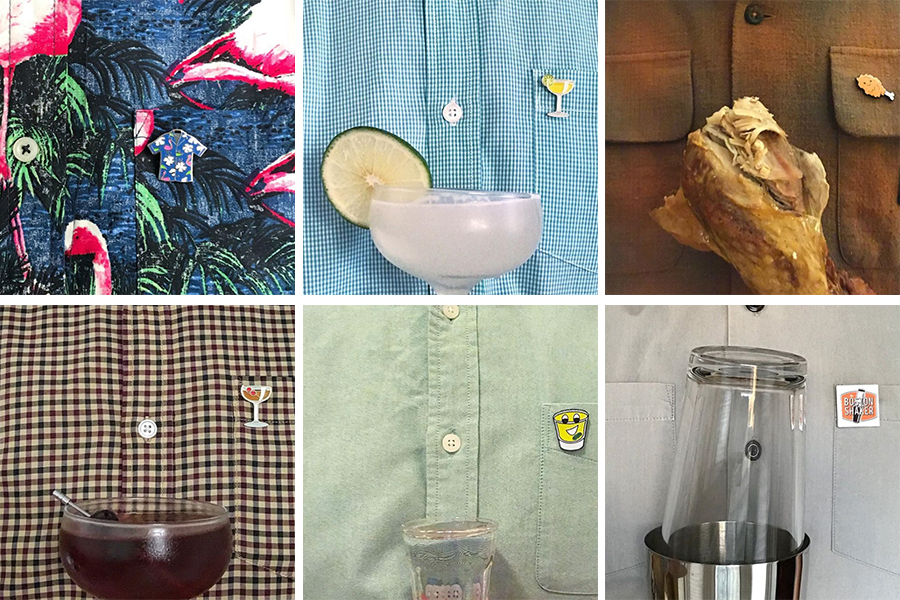 A collection of Anthony Mottla’s—aka @young_overholt—#Pinception posts. / Photos via Instagram

Anthony Mottla is certainly not the first bartender to express his style with quirky pins—cue the timeless, and not-safe-for-work Office Space clip of Jennifer Aniston’s character Joanna flipping out about “flair”—but his #pinception Instagram series is my latest delight in the social media realm.

Mottla doesn’t wear 37 pieces of flair—he typically wears just one enamel pin to work at the Automatic, and the Boston Shaker, every day. But he is certainly expressing himself. I started following Mottla on Instagram over the summer, after I met him while judging mocktails at the Taste of Cambridge. Soon after, he posted his first #pinstagram, as pin aficionados often tag on the social media site, featuring a tiki cocktail pin by Cambridge artist Castle Thunder Graphics, which is something the Boston Shaker sells.

But in the fall, Mottla upped his #pinstagram game in a serious way: He posed with a Hawaiian shirt pin that looks exactly like the shirt he was wearing. Tagging it #pinception, it eventually led to an intermittent series where he poses with an object that perfectly matches his pin. A bottle of Peychaud’s Bitters, a turkey leg, classic cocktails, the Boston Shaker—the possibilities seem endless.

“I’ve always had a bunch of pins,” Mottla says, estimating he has between 50 and 75 stored in an oversized coupe glass at home. “I like to wear them on hats and things.”

When he started working at the Automatic, where the dress code is a collared, button-down shirt, he started pinning something onto his front pocket. Soon after, the Boston Shaker got in a set of eight, classic cocktail pins from a New York City-based designer called Love & Victory.

Since Mottla spends so much time making drinks at work, he doesn’t do it as often at home, he says. So after buying the Love & Victory set, he decided to use it as #pinspiration to start shaking things up in his own kitchen again.

“Each night, I’m going to take a few minutes to make a cocktail and make it picture-perfect to go along with these pins,” he says. The posts “gained steam way quicker than I expected. People were into it, so I was like, OK, I’ll keep it up! I just started matching funny things with pins that I had, and I’ve been scouring Instagram and Etsy and finding pins of things I already have, or if it’s something silly that I can do.”

The best example of the latter inspiration is my personal favorite: a Mamaleh’s bagel with lox, capers, and cream cheese, paired with a two-pin set by another Brooklyn company, Pintrill.

Mottla saw the pin first, and since he works right across the street from Mamaleh’s, he thought it “was such a funny, specific thing, but I could make it happen,” he says. “So I grabbed that pin, had a delicious breakfast sandwich, and [made] a funny post out of it.”

Not all the #pinception posts are food-and-drink-related—he’s done a sneaker, various recorded media, and even a pushpin (talk about #pinception!). But they’re all delightful. I hope you enjoy them as much as I do.