Exhibit ‘A’ Brewing Company Plans a Beer Garden for Framingham

After initial city approval, the outdoor bar is one step closer to opening in July. 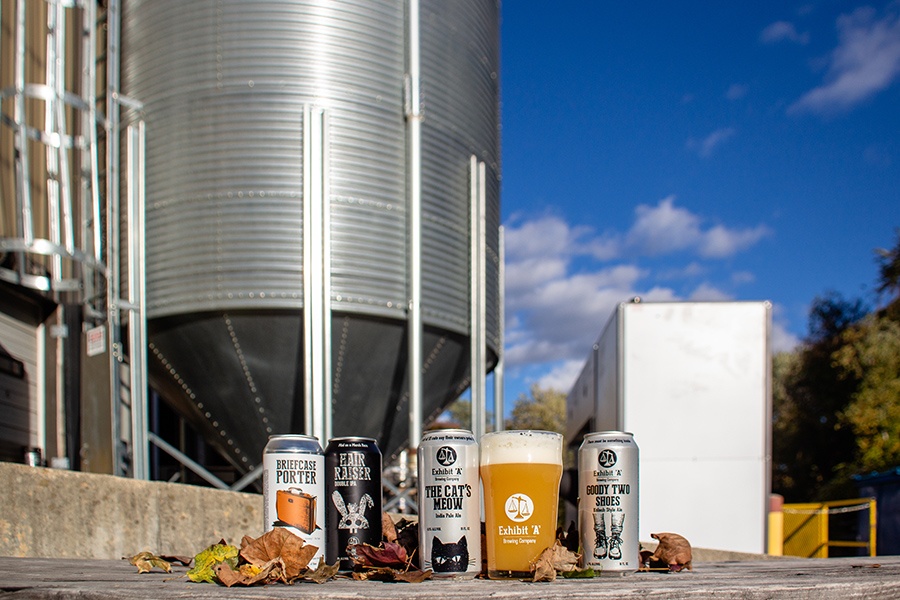 Fingers crossed, beer fans will be able to sip Exhibit ‘A’ brews outside into the fall. / Photo courtesy of Exhibit ‘A’ Brewing

UPDATE, July 18: It’s official: MetroWest has a regular, weekend beer garden. Exhibit ‘A’ kicks things off at 82 Morton St. in Framingham on Friday, July 19, with a stacked draft lineup of beers, plus Stormalong Cider, wine, and hard seltzer. Opening weekend features Friday evening pop-ups by Farmacy Café and T.C. Scoops Ice Cream, plus live music by Melissa Plett; and Saturday will have Jamaican fare from JA Patty RI from 2-7 p.m., and live music by Cliff Notez and Stephon Joseph from 7-9 p.m. Check out the brewery’s Facebook events for all the details. Going forward, the Exhibit ‘A’ beer garden is open  Fridays and Saturdays from noon-10 p.m., and Sundays noon-6 p.m.

While Bostonians have a plethora of options for drinking craft beer in the sunshine this summer, and downtown Worcester has its own al fresco hotspot, the beer garden trend hasn’t taken root in MetroWest. But Framingham’s Exhibit ‘A’ Brewing Company is hoping to change that with a new, seasonal beer garden—poised to be the first regular, outdoor beer bar for the region between Boston and Worcester.

The sun sail-shaded, string light-illuminated hangout spot is proposed for a parking lot across the street from Exhibit ‘A’s Morton Street brewery. Check out some early renderings below.

The beer garden received support from the Framingham Planning Board last week, reports the brewery’s general manager, Kelsey Roth. Exhibit ‘A’ is up for one more public hearing in the city on Thursday this week, and pending approval, work will begin in earnest to open the beer garden in early July.

In the meantime, Exhibit ‘A’ is currently hiring in anticipation. Having more taproom staff ready to go will expedite the outdoor bar opening, if and when plans are approved—but adding employees is also a sign of big plans to come for the makers of the Cat’s Meow IPA and other popular beers: The parking lot proposed for the beer garden is part of an expansive additional property Exhibit ‘A’ Brewing recently purchased. Formerly Hansen Electrical Supply, the brewery bought the building from their retiring landlord, Roth says.

“We had been looking around for a second location, and this opportunity presented itself,” Roth says. Exhibit ‘A’s former landlord was the electrical company; the brewery has purchased its own building, as well, Roth adds.

The new building—which includes a 12,000-square foot ground-level as well as a similarly sized basement—will need substantial renovation, and the Exhibit ‘A’ crew isn’t even sure yet what they want to make it become; ideas they’ve tossed out so far range from indoor mini golf to a bowling alley to a brewpub to a lounge, Roth says. “There’s a lot of potential in there, and we want to make sure it’s really what the city wants and needs,” he says. That conversation will happen publicly, later on. “We’re talking 2020 at the earliest” for anything to open inside the building.

In the meantime, though, the purchase came with expansive outdoor space. “It’s something we’re lacking [with] our regular taproom,” Roth says. Jack’s Abby has outdoor seating at its brewery a half-mile away in Framingham, but there is more room for such an amenity in MetroWest.

“I think we need something like this,” Framingham Planning Board chairwoman Christine Long said during last week’s hearing, according to Wicked Local Framingham. “We certainly have a shortage of comfortable, amenities-type places for people to go to and gather.”

Exhibit ‘A’ staffers are constructing beer garden furniture—high-top tables and stools, benches, planter boxes, and fencing—out of wood reclaimed from the former electrical supply building, Roth says. They are installing eight draft lines inside a retrofitted shed, from which the beer will be served. Expect core Exhibit ‘A’ beers, including Cat’s Meow and Goody Two Shoes Kölsch, as well as limited releases and potentially, eventually, a beer garden exclusive.

Like Boston-area beer gardens, the Exhibit ‘A’ endeavor would be licensed with a series of one-day beer and wine permits, so there is potential for guest taps for cider and wine, Roth says. Live music and food pop-ups scheduled for regular taproom appearances would move outside, he adds.

Pending approval, the Exhibit ‘A’ beer garden would open Friday, Saturday, and Sunday into late October.