Brighton Has a New Spot for Sausages, Beer, and Lobster Rangoon Grilled Cheese 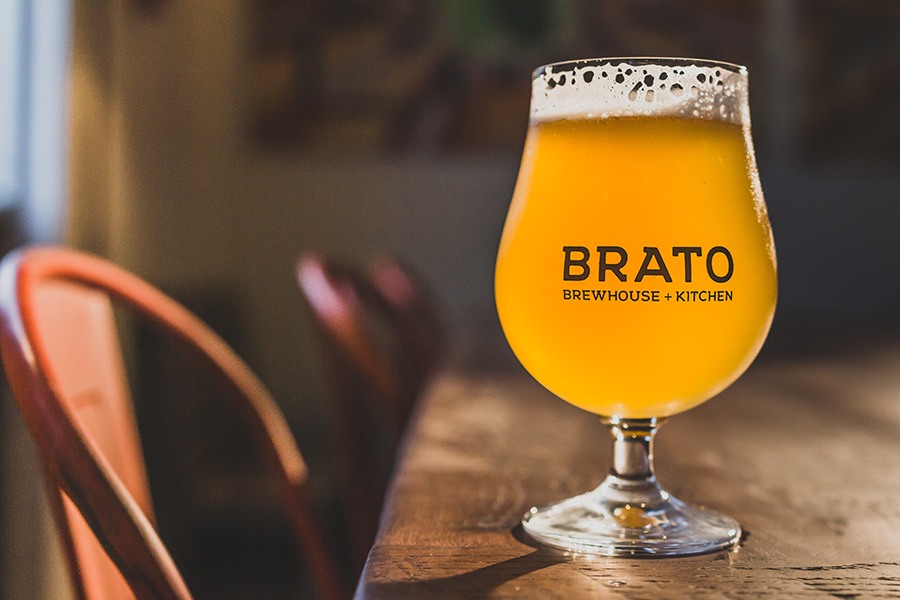 Brato Brewhouse + Kitchen is a beer-driven restaurant concept that was fermented over the course of 400 pop-up events—and now it’s settled down in Brighton. Brato Brewhouse is now open on North Beacon Street, with a lineup of fresh beer made in collaboration with local breweries; and a growing menu of grilled cheese sandwiches, sausages, pickled items, and more fermentation-fueled fare. It debuted on Saturday, Oct. 26, and has a grand opening weekend planned for November 1-3.

Brato is the first ownership venture for two Cambridge Brewing Company alumni, chef Jonathan Gilman and brewer Alex Corona. The duo announced plans for their own place back in 2017, and they have hosted literally hundreds of events at other breweries and elsewhere to build hype and test menu items in the meantime.

That assistance was an “amazing testament to the brewing industry in this town,” Gilman says. Rather than a competitor, Brato was a collaborator with the likes of Idle Hands, Night Shift, Dorchester Brewing Co., and Lamplighter, where Brato had a standing weekly appearance for more than a year. And though Brato has a permanent home now, those relationships continue: The Brighton brewing system has yet to be connected, due to delays in upgrading the gas service required to power the 10-barrel brewhouse, Gilman says. So Brato’s six-beer list available this week is comprised of collaboration brews Corona created off-site with industry friends.

Among the offerings is Brato y Brato, a sessionable table beer made with Bone Up Brewing Co. in Everett; and three different IPAs, including Foam on the Range, a classic, Northwest-style hop bomb made at Night Shift Brewing at Lovejoy Wharf, which boasts bitter, piney, and citrusy flavors with a dry finish. Two beers made in collaboration with Cambridge Brewing Company are on the hazy side of the spectrum, including a pale ale and a New England-style IPA. Lager lovers will want to try a pale zwickelbier, made by Brato at Idle Hands; and a seasonal treat brewed at CBC—a spiced saison called Pumpkin Patches O’Houlihan—rounds out Brato’s opening beer list.

Beyond the beers, Brato has nitro cold brew on draft, and a seasonal flavor of kombucha; it’s mulled cider to start. Other soft drinks include house-made switchels, and shrubs cut with sparkling water to make a refreshing soda.

“We’re sticking with the idea that fermentation is both engaging and approachable,” says Gilman. “You can be a huge nerd about this stuff like I am, or you can just enjoy the flavors.” 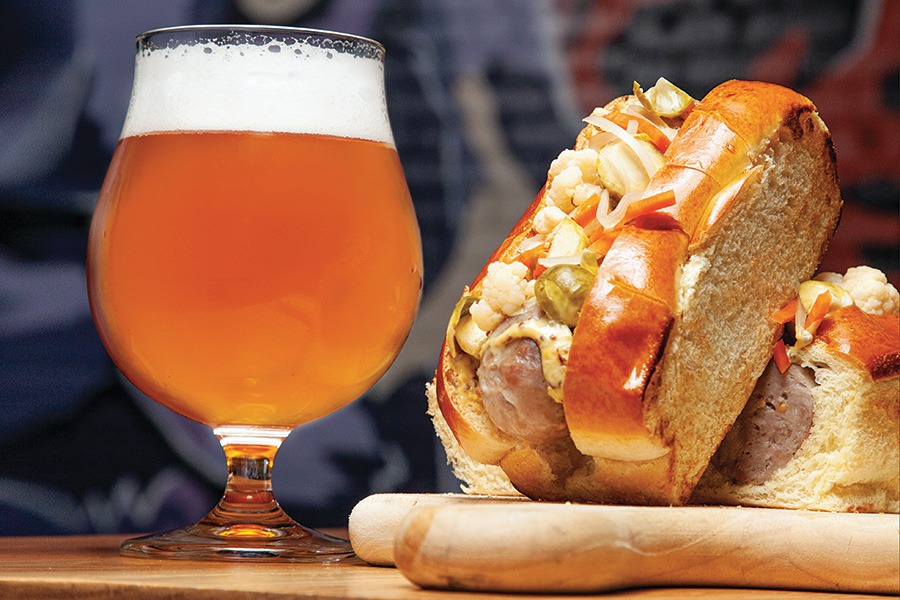 Brato bratwurst with piccalilli. / Photo by P.J. Couture for “Small Bite: Best of the Wurst“

Poised to grow as the new restaurant gets going, Gilman’s food menu begins with an all-day lineup of bar snacks and pickles, grilled cheese sandwiches on house-baked sourdough breads, and house-made sausages. Beyond the sourdough starter that Gilman uses to ferment all of his breads in-house, the food is also connected to the broader theme thanks to the freshly milled grains he uses to make each loaf. From pilsner malts to smoked malts, “using fresh-milled beer grains really transforms the flavor of bread in the same way it transforms the flavor of beer,” Gilman says. He is also using ingredients like Korean gochujang and nori to flavor his sourdough for some unique creations.

Many favorites from Brato’s pop-up days are on the opening menu, including the signature Brato bratwurst with a bright piccalilli relish; and a lobster rangoon grilled cheese on Korean pepper-and-pilsner malt sourdough. There are bar snacks, like pickle-brined Nashville hot chicken wings, and spicy-salty kimchi-queso dip. On the lighter side of things, Brato has a few fresh salads, including baby greens tossed in a kombucha vinaigrette; kimchi and cold rice noodles with sesame, carrot, avocado, and crumbled egg; and avocado toast on red chili sourdough. Daily dinner specials such as steak tips, roasted chicken, and a Nashville hot-style whole belly clam roll will be added to the offerings from 5-10 p.m., Gilman says, and look, too, for brunch and lunch specials supplementing the menu from 11 a.m.-2 p.m. every day.

“We see brunch as a cool opportunity to [apply] some lessons we learned form the pop-up scene in terms of brunch events,” Gilman says. “There are a bajillion places to get the basic breakfast plate. So we’ll do a chicken and waffle takeover, for example, to get people psyched to come in for a bunch of different chicken and waffles. We talked about hosting [Lamplighter Brewing Co.’s in-house cafe] Pepita for a brunch takeover with their breakfast tacos. We like the idea of morphing into different weekends so it doesn’t get repetitive.”

And the pop-up days aren’t over, either: Gilman says Brato might be back on the scene beginning in 2020. Follow along on Instagram to stay in touch about future events.

A former electrical supply store on North Beacon, Brato Brewhouse itself “toes the line between warm and industrial,” Gilman says. Boston’s McMahon Architects and the Malden firm Pidgeon & Company, which also did the buildout of Idle Hands’ taproom, designed and built the bar and dining room, which is full of rustic woods, corrugated metals, and warm shades of orange and red. Four eye-catching murals hone in on the fermentation focus: You’ll see beer, sausage, grilled cheese, and pickles.

Gilman knows the greater Brighton community was hotly anticipating Brato’s long-awaited opening, and he’s grateful for everybody’s patience, he says. “We appreciate the fact that people already feel passionate about the project. They want a place to go and they don’t want to travel outside the neighborhood. We’re very excited to get open for them,” he says. 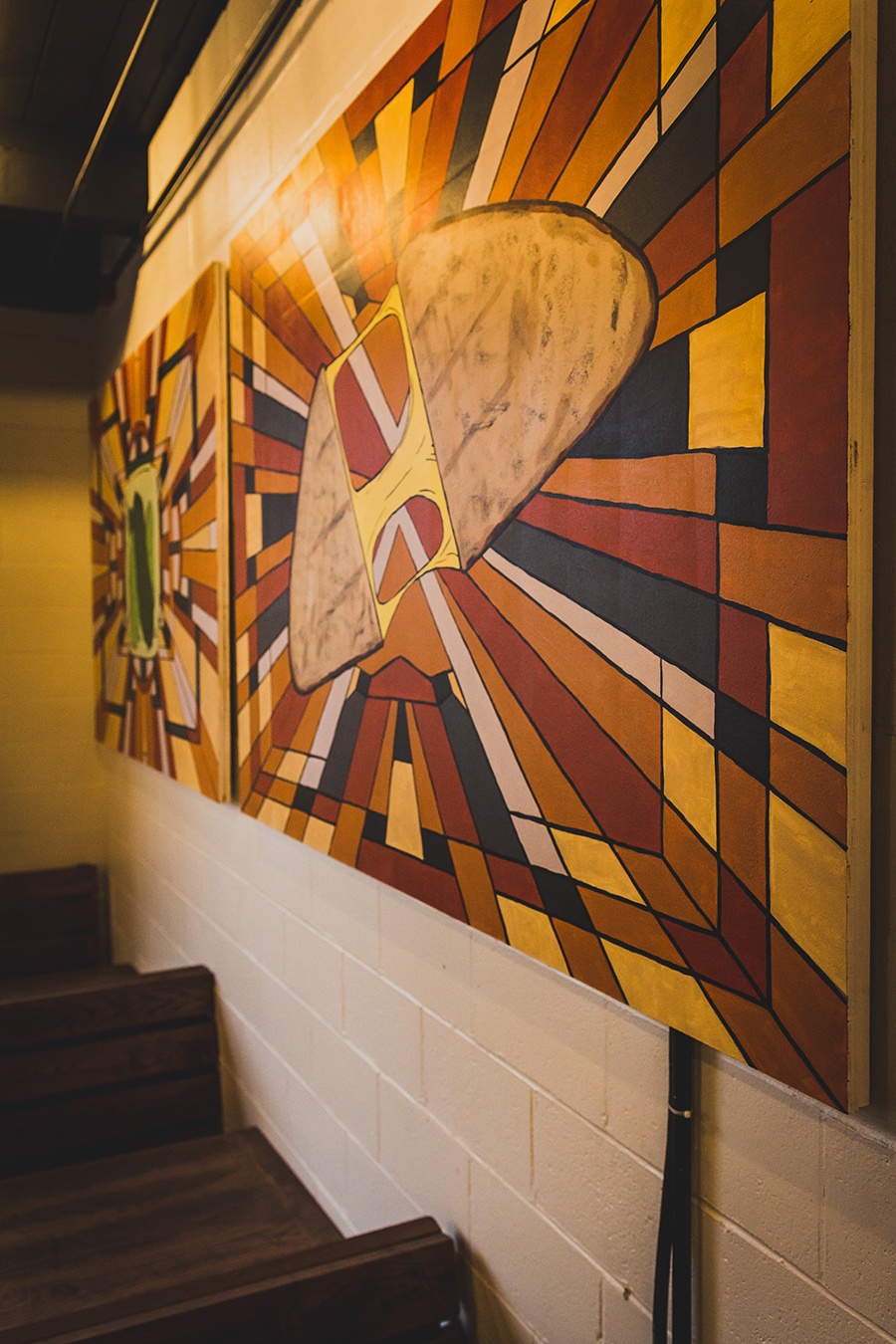