The Boston Black Hospitality Coalition is raising funds and making connections in hopes of saving an already vulnerable group of businesses. 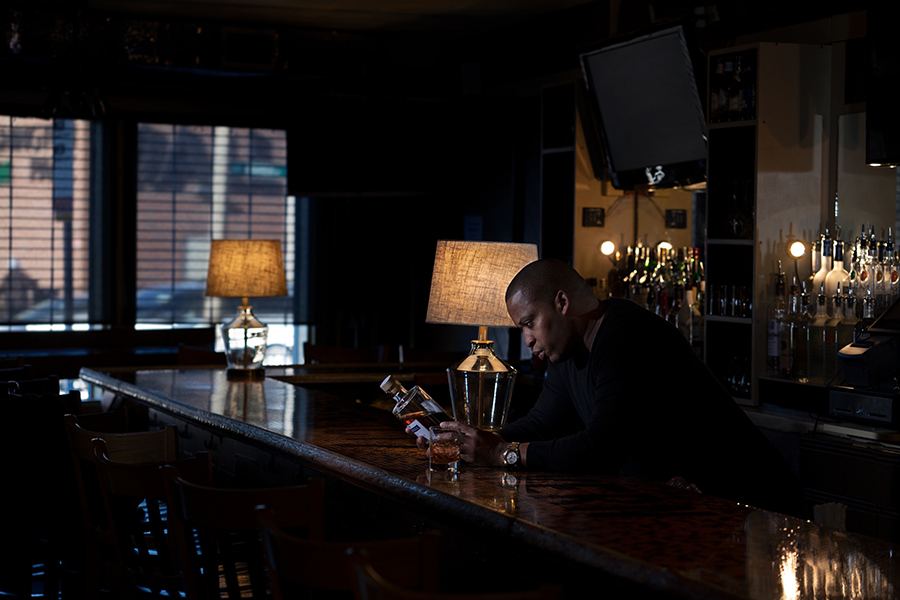 Royal C. Smith at his Roxbury bar, District 7 Tavern. Smith is part of a new Boston Black Hospitality Coalition, which aims to support and preserve the threatened community of black-owned bars in Boston. / Max Nagel Photography

A newly formed working group of Boston business owners is advocating for the city’s black-owned restaurants and bars—because, they say, if they don’t, it’s almost certain there won’t be any black-owned restaurants left by the time Boston reopens. Dubbed the Boston Black Hospitality Coalition, the effort aims to amplify the issues facing black restaurant and bar owners during the coronavirus pandemic, and connect struggling business owners with resources. The coalition considers the current threat to Boston’s black-owned businesses a “state of emergency,” and has launched a relief fund to help financially sustain these businesses for as long as it can.

“Yes, I’m fighting to stay open,” says Royal C. Smith, owner of Roxbury’s District 7 Tavern and a cofounder of the coalition. More than that, though, Smith says he’s in this for everyone. “I’m fighting for Wally’s [Jazz Café]. That’s a live music institution. I grew up in that place. I’m fighting for Darryl’s [Corner Kitchen & Bar]. I was the general manager there. I know what that place means to a lot of people.”

With the support of Boston’s branch of the NAACP, Smith teamed up with Nia Grace, owner of Darryl’s, to form the coalition about two weeks into the statewide shutdown of on-site consumption. Founding members also include Eddy Firmin, owner of Savvor Restaurant & Lounge in downtown Boston; Cheryl Straughter, chef-owner of Soleil Restaurant & Catering in Roxbury’s Nubian Square; and Frank Poindexter, proprietor of Wally’s in the South End.

“We realized we’re all having the same conversations,” Grace says—about how to support the cooks, servers, musicians, and other employees they had to let go; about how to navigate available grant and loan programs. About how their families and friends are being impacted by COVID-19.

Despite being 25 percent of the city’s population, black residents make up more than 42 percent of Boston’s coronavirus cases where data on race is available, the Boston Globe reported.

The pandemic is “shedding a light on” the existing disparities facing the black community, says Straughter. “Look at the workers in the restaurant industry. Look at the employees in retail ringing these registers around here. It’s a certain ethnicity. We have to really open our eyes and expand our peripheral vision and have conversations about that.”

The Boston Black Hospitality Coalition will provide financial assistance for black-owned businesses. “But the long-term goal is being a resource,” Grace says. That might mean helping business owners navigate the process to apply for government assistance grants and loans, sharing details about a new private grant opportunity, or connecting entrepreneurs to vendors that can solve supply-chain issues. Forming a coalition “was a natural thing, and very necessary in this moment, frankly, for our survival.”

Boston’s black-owned restaurant community is small. The coalition represents almost all eight black-owned liquor licenses; for perspective, the city has 1,200-plus bars. Grace points out that many black-owned businesses are concentrated in and around Roxbury, which is a deep-rooted community, but not the kind of tourist destination where private investors are spending loads of development dollars (think: the Seaport and the Fenway). So black-owned restaurants tend to be undercapitalized in general, Grace says.

“Whether it is your credit score, or your ability to have collateral, it has been difficult for some of our black businesses to get a loan pre-COVID,” she says. Without bank relationships, business owners were at an immediate disadvantage trying to navigate the federal Small Business Association’s Payroll Protection Program, which is facilitating small business grants and loans through private banks.

With the “proactive” help of Eastern Bank in Roxbury, Grace says she was able to secure a Paycheck Protection Program loan from the SBA for Darryl’s. But she’s still sitting on the money, as she hasn’t yet figured out how to safely hire back the 38 employees she had to lay off in March. In order to have the PPP loan forgiven, the terms stipulate most of the money must go toward paying employees. “For the restaurant and bar industry, it doesn’t work out, as long as we have to remain closed.”

For District 7, a PPP loan is out of the question, says Smith. He feels his business doesn’t have the right banking relationships to secure one. “I’m a small, 824-square foot bar in Roxbury,” Smith says. When business is usual, the neighborhood watering hole is sustained by Roxbury locals and decades’ worth of regulars (the bar was known as Sonny Walker’s before Smith bought it in 2018). “Our community cares, but for this situation right now, we need an influx of cash,” he says.