A popular local brewery’s latest taproom, a speakeasy-inspired cocktail bar, a wine bistro, and more—all under one roof. 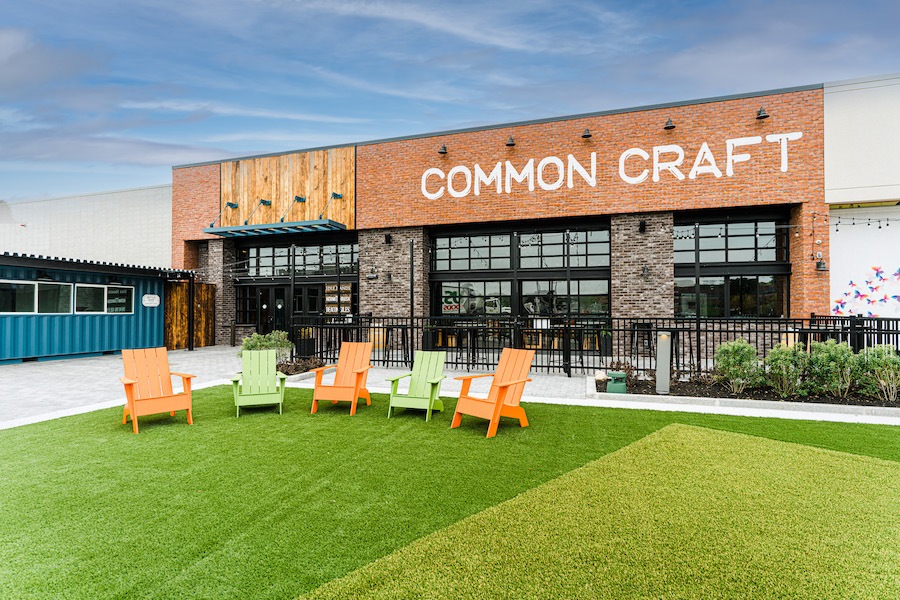 Over at Burlington Mall, what was once Sears now looks a little different. A large-scale renovation project recently turned the sprawling department store into an “open-air lifestyle center” with outdoor amenities, plus plenty of new dining and shopping spots. Out: electronics, household appliances, and automotive supplies. In: Illuminated swing chairs, fire pit tables—and with one major new opening, several bars for kicking back with craft beer, wine, and booze.

Common Craft launches this week at the suburban shopping plaza, and it’s a single-stop destination to discover multiple tap rooms from New England beverage brands (with plenty of mall-lot parking for your designated driver). The latest venture from a successful North Shore chef and entrepreneur, Common Craft is more than a restaurant—it’s a host to distinctive bars from Malden-based Idle Hands Craft Ales; Brattleboro, Vermont’s sour beers-focused Hermit Thrush Brewery; Salem’s Deacon Giles Distillery; and a local wine distributor, all set in an indoor/outdoor venue offering a unique food menu and service model. 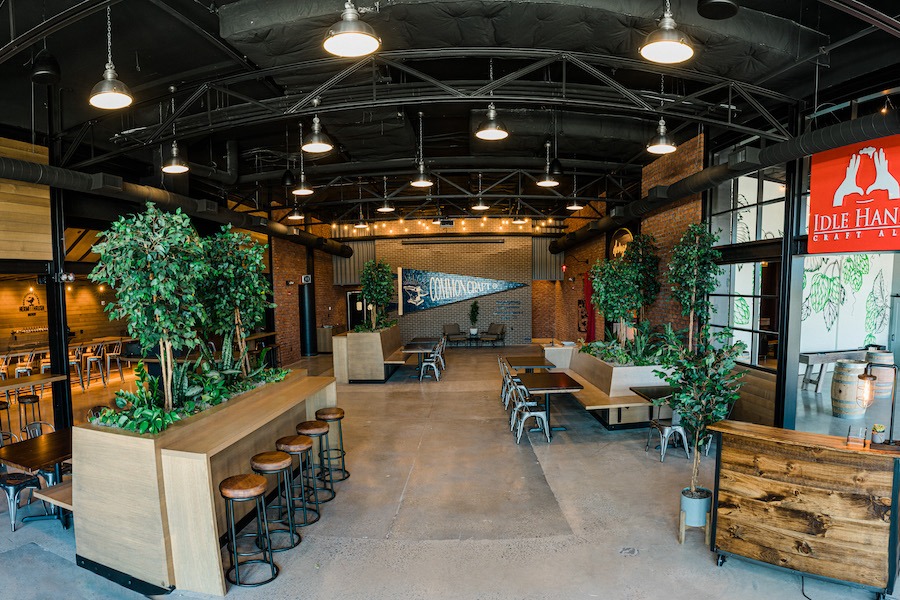 The Great Hall at Common Craft. / Photo by C.Mcintosh Photo

Founder Larry Leibowitz came up with the idea for Common Craft to highlight even more local brews, spirits, and small-batch wines than those he can accommodate at his popular Salem restaurants, Bambolina and Kokeshi. Burlington Mall, he says, was the perfect place for the multifaceted project. “It’s a huge hub for the Metrowest, North Shore, New Hampshire, and Boston,” Leibowitz says.

“We can attract a lot of consumers from a lot of different locales,” he adds, and give them “multiple experiences under one roof.” Everything inside is being operated by Common Craft—a departure from the food halls that have popped up around Boston and beyond (as well as the mall food courts of yesteryear), where outside brands sign individual leases to move in.

At Common Craft, guests will enter through the restaurant’s so-called Great Hall, which has bench seating and booths as well as stools and drink rails shrouded in greenery. To the left, you’ll find the green-walled taproom for Hermit Thrush, where a barreled ceiling nods to the vessels the brewer uses to make its mixed-fermentation sour ales. A copper bar, meanwhile, calls to mind the brewery’s colorful, shimmery can designs. There’s a shelf stocked with board games for playing over drinks, as well as a Skee-Ball machine. 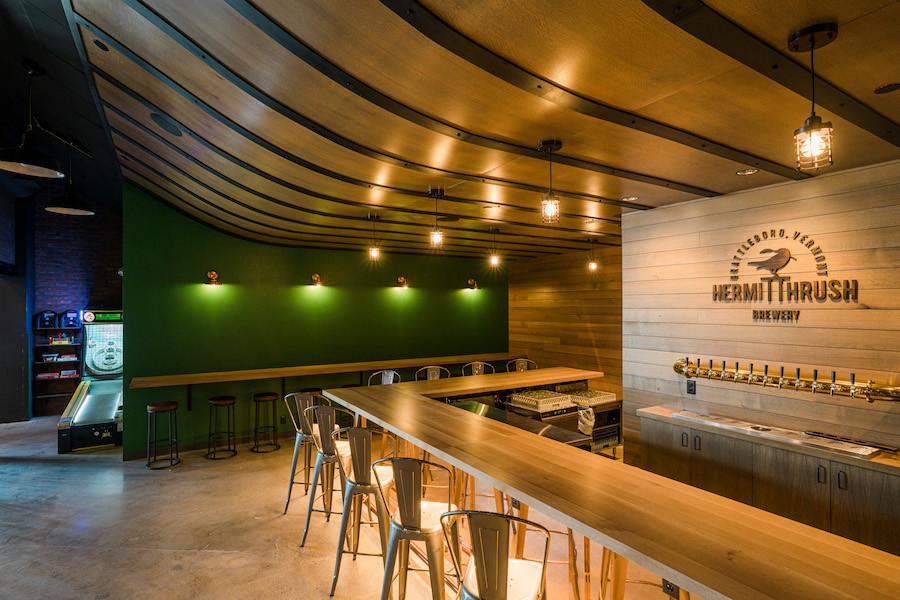 On the other side of the Great Hall, the Idle Hands Craft Ales taproom is offset by walls of paneless windows. Beer hall-style tables and benches fill its communal seating area, with a black-and-red bar—Idle Hands’ brand colors—at the back of the room pouring a rotating selection of 12 American and German- and Belgian-inspired craft beers. A hopvine mural on one of the walls evokes the art inside Idle Hands’ own Malden taproom. There’s a shuffleboard table, another callback to the original spot, as well as a vintage Tapper video-game cabinet that Leibowitz has covered in Idle Hands stickers. 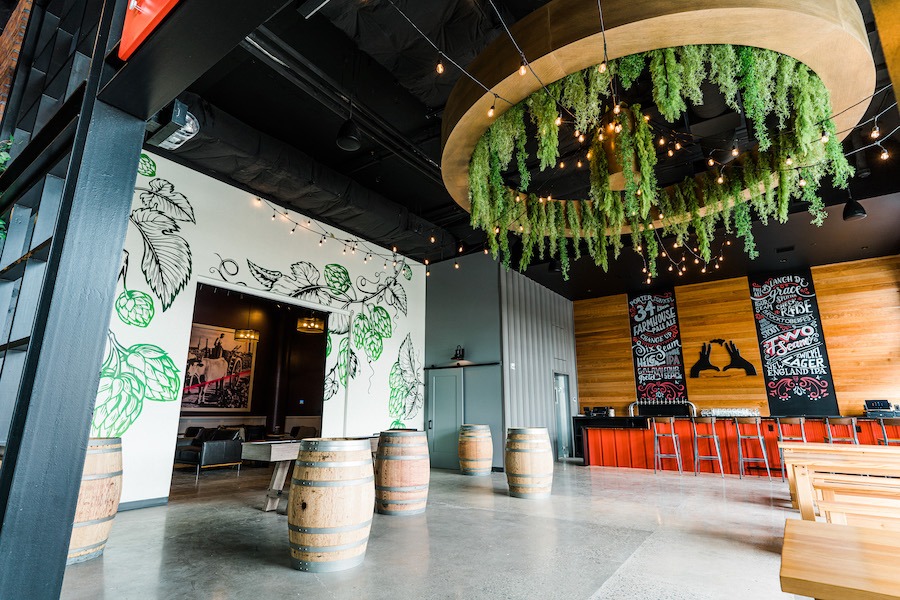 There’s also a leather couch-filled wine lounge dubbed Élevage (stylized with all lowercase letters), accessed through the Great Hall or a set of pocket doors inside Idle Hands. Élevage is a brand of Leibowitz’s creation that works exclusively with Framingham-based Vineyard Road Import and Distributor to highlight worldwide vintners on a rotating basis. First up: G.D. Vajra, a maker of organic, high-elevation wines from Barolo, Italy. 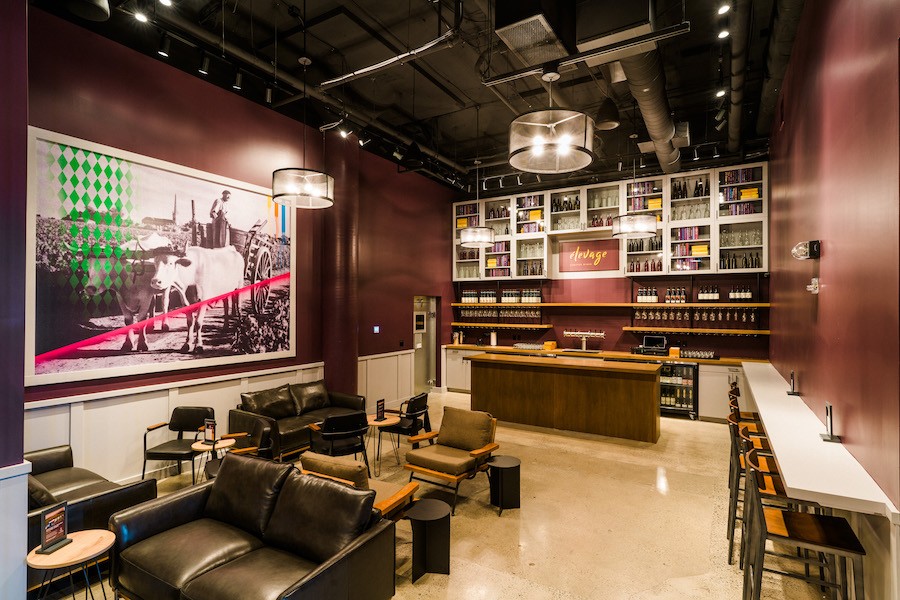 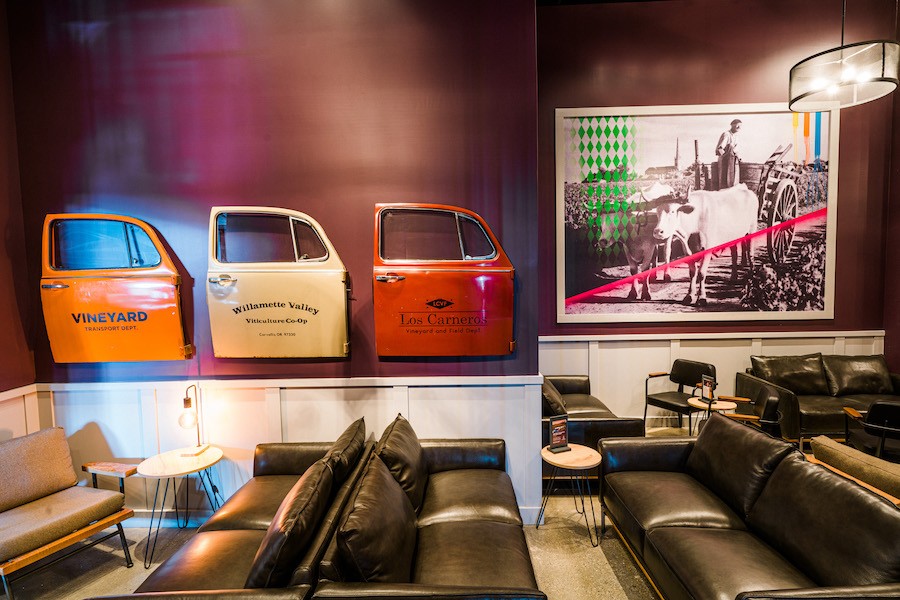 But wait! There’s more. Past the wine bar, a nearby entryway draped in a red velvet curtain bears red neon signage noting “Bibles For Sale.” Through this door is a stunning craft-cocktail “speakeasy” for Deacon Giles Distillery, whose brand story is inspired by an impious deacon-turned-distiller who unknowingly hired demons to work for him. Here you’ll find high ceilings, a dark ambiance, and a backlit backbar full of artisan bottles crafted in Salem. The cocktail menu includes eight Deacon Giles “standards” like the Gold Fashioned (made with amber rum) and the Berry Bees’ Knees (made with a seasonal fruit-infused gin), plus rotating new creations. 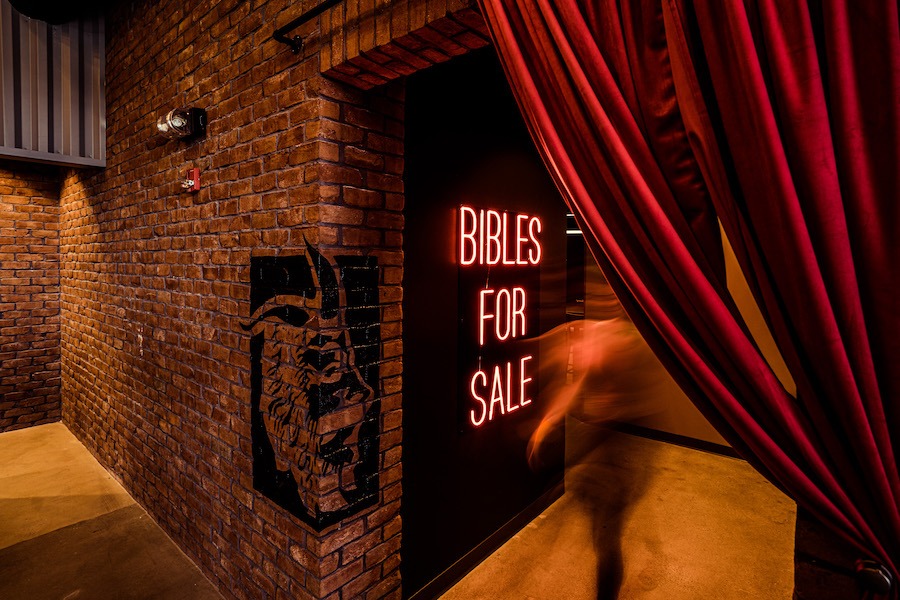 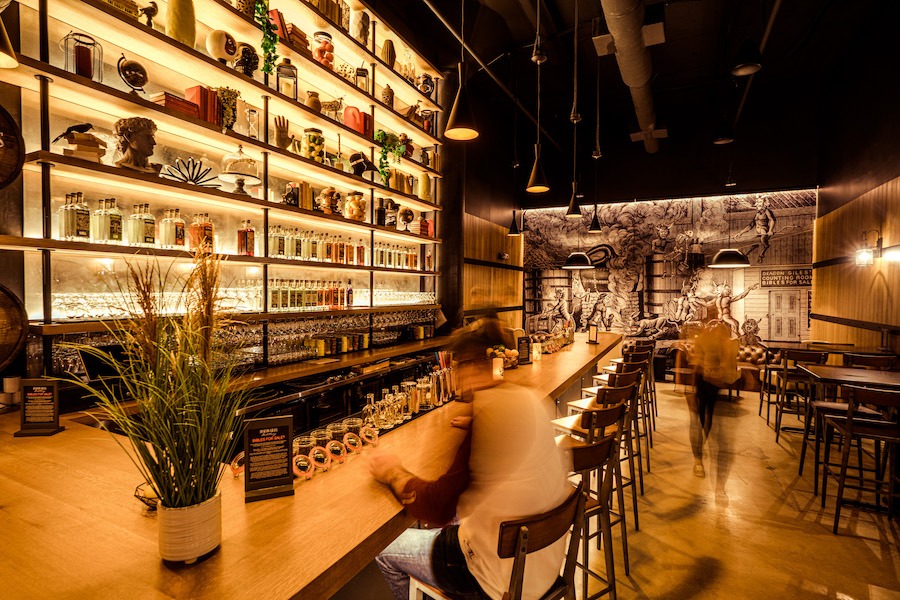 All of the beverage options at Common Craft can be paired with unexpected spins on recognizable bar snacks and gastropub fare. There’s the “upside down craft poutine,” for instance, which tops beer-battered and fried cheese curds with bone marrow gravy and potato sticks; pepperoni meatball sliders; and a “brewer’s Buddha bowl” of ancient grains and roasted vegetables, black beans, avocado, hemp seeds, and Greek yogurt dressing. The dining menu is available throughout the spaces, and you can order food directly from the bartenders or have it delivered to your phone via QR codes. There are no traditional servers roaming the floor.

There is a greeter at the entrance of Common Craft (as well as a retail trailer selling bottles from each of the featured brands inside), but their job is to orient folks to the choose-your-own-adventure format of the place, Leibowitz says. No matter where they order their boozy beverage, visitors can seat themselves at any table inside or on the beer garden-style patio. 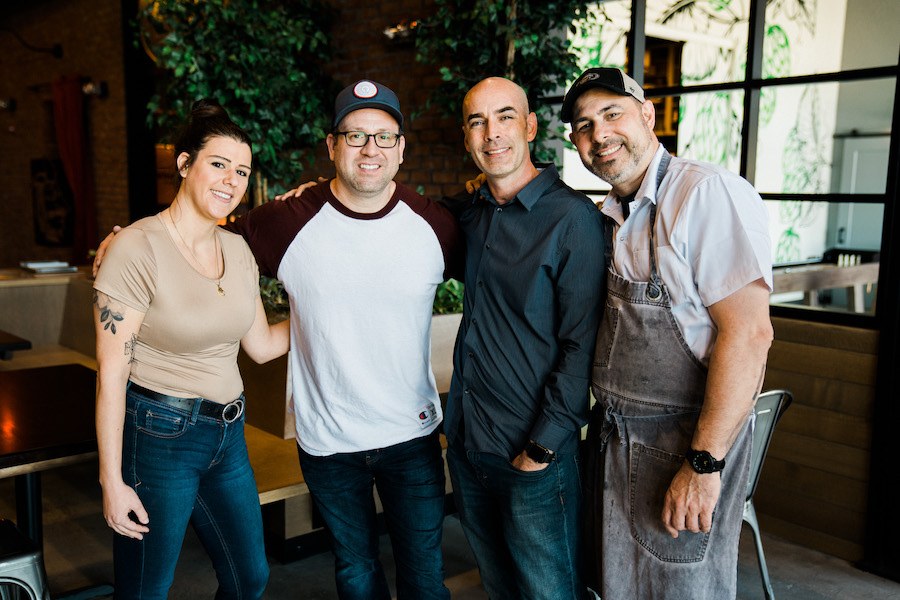 Beyond the beer garden, a patch of synthetic turf outfitted with Adirondack-style chairs, nest swings, a bocce court, and firepit tables is mall property. Simon Property Group, the developer behind Burlington Mall, is keen to enliven this area, Leibowitz says—and he’s happy to help: Common Craft will be planning ticketed events out there, such as tiki drink parties with Deacon Giles and an Oktoberfest with Idle Hands.