The Ultimate Guide to Brunch in Boston

The top spots around town for the most important meal of the week, whether you're looking for a cozy neighborhood spot, an ultra-glam way to keep the weekend going, or a buffet with a side of jazz. 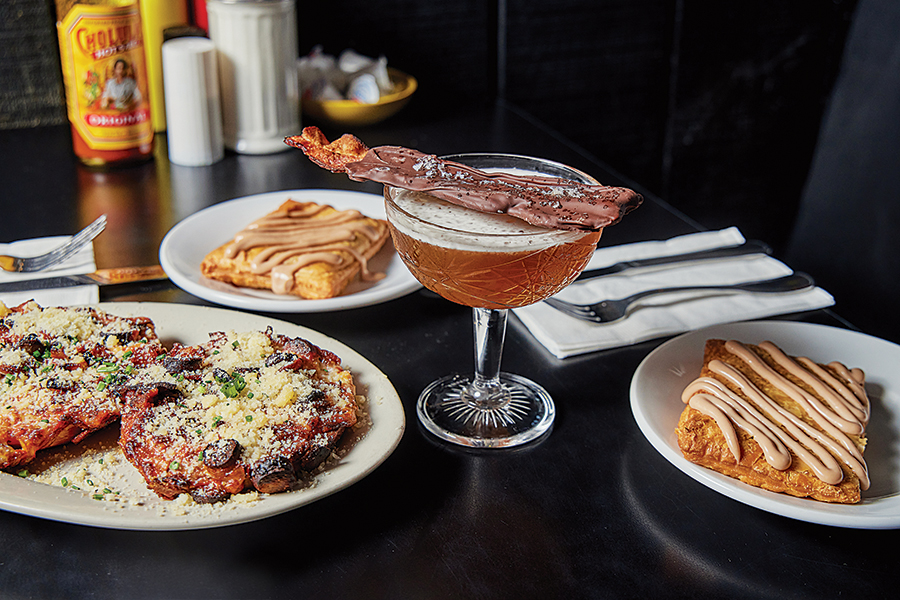 For many brunch fans, an over-the-top booze menu is practically a requirement of the genre. Thankfully, Dorchester’s Bowery Bar has you covered with options like an 88-ounce mimosa tower (parties of three or more), spiked iced coffees with cookie or candy toppings, and even a vodka-infused green juice with ginger beer and a fruit skewer—if that’s what might make you feel better after last night’s party. Round out the meal with treats like doughnut holes in seasonal flavors and cinnamon rolls with cream cheese frosting, or get a little fancy with a lobster Benny. Bonus: In the colder months, the Bowery Bar offers private heated yurts for special bookings.

Also try: North Street Grille in the North End, where you can wash down cannoli pancakes and Nutella French toast sticks with carafes of blood orange–limoncello mimosas or breakfast-y creations like a chocolate-milk martini and blueberry-muffin martini. 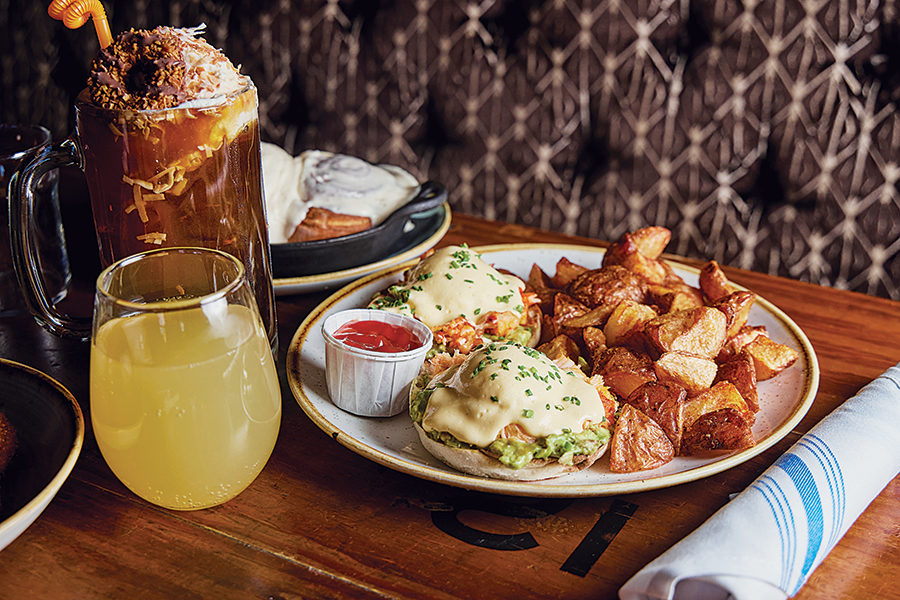 Kids and adults alike love the eclectic, colorful décor and expansive all-day brunch menu at this New Hampshire–born regional chainlet. The “Tiny Toast” menu caters to the littlest appetites with small portions of brunch classics, like French toast and pancakes, but bigger kids may want to venture over to the main menu to check out over-the-top options such as the King Cakes—banana-and-chocolate-chip pancakes topped with bacon, a peanut-butter drizzle, and whipped cream. We cannot be held responsible for the ensuing sugar rush. (And as for the parents, well, you may want to check out the cocktail list: How about a flight of mimosas, bloody marys, or spiked coffees?)

Back Bay and other locations, thefriendlytoast.com.

There’s something so satisfying about one of Boston’s most raucous drag brunches taking place at Carrie Nation, a venue cheekily named for a particularly staunch representative of the pre-Prohibition temperance movement. Dubbed “Drag Me to Brunch” and hosted by Destiny Boston and Dee Dee de Ray, it’s been going strong since 2017. The weekly party gets started with a buffet brunch and plenty of cocktails and turns into a high-energy, interactive afternoon that’ll have you laughing and dancing. 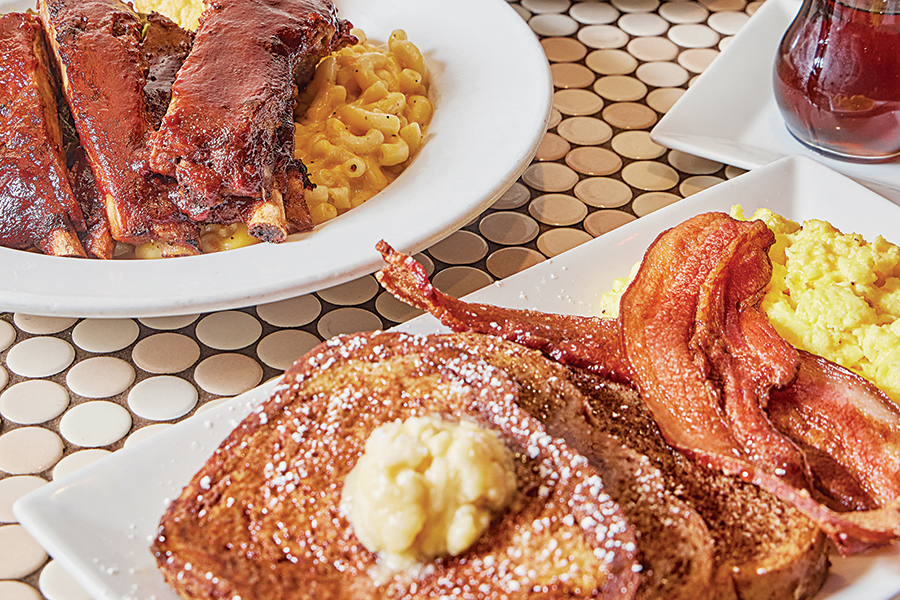 This soul-food mainstay accompanies its hearty fare with a jam-packed live-music calendar. On Sundays from 11 a.m. to 3 p.m., that means a rotating array of local jazz acts, such as the trombone-driven Cliff Weeks & the All Stars Band, performing alongside an all-you-can-eat brunch buffet. The menu varies, but perennial favorites include the macaroni and cheese and fried catfish. You’ll want to dig into the brunch cocktail selection, too: Why not start the day with two kinds of a buzz, thanks to the French Nouveau Maple Café, a boozy coffee concoction?

Also try: The Beehive in the South End, which serves up shakshuka and biscuits and gravy with a side of live jazz.

Most neighborhoods have a homey restaurant or two that serve as the beloved local gathering spot; not every neighborhood is lucky enough to have one that’s equal parts low-key and destination-worthy. Crowds flock to the Neighborhood in Union Square for giant portions of pancakes, French toast, and more, smothered in heaping toppings of berries and whipped cream, and a cozy patio bedecked with colorful umbrellas and grapevines in warmer months. But the one thing no one can get enough of here is the cream of wheat. Yes, really. Don’t miss it, and don’t bother asking for the recipe.

Also try: Brookline Lunch in Cambridge’s Central Square—under current ownership since the late 1980s but with roots in the 1930s—for casual vibes and big stacks of baklava pancakes. 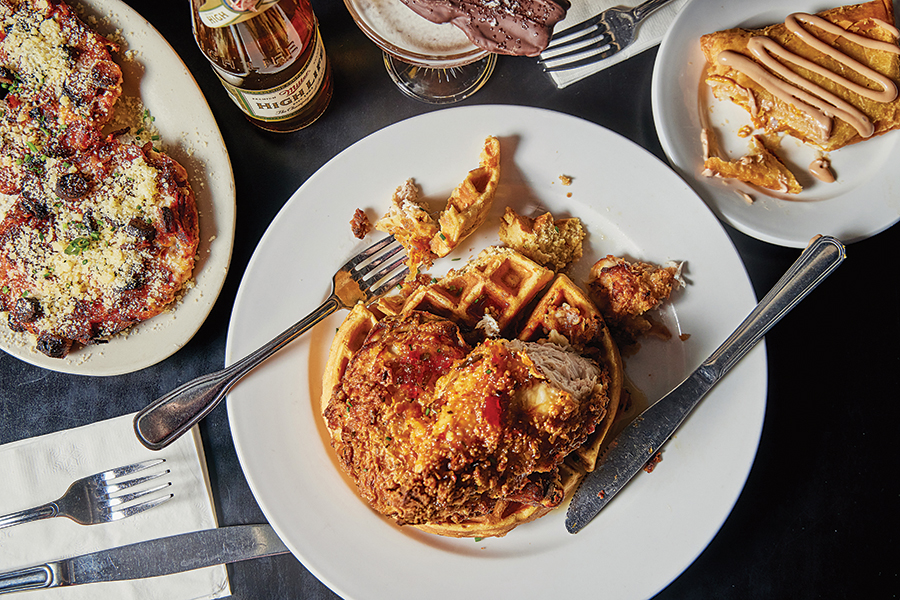 Whether you work in the restaurant industry or just find yourself in the mood for breakfast at a nonconventional time, Trina’s has one of the area’s best-loved “industry brunches,” filling Monday afternoons with house-made “Pop-Tarts” in rotating flavors, pizza bagels, and heaping plates of chicken and waffles. The cocktails are a must, particularly the Adirondack, which features butter-infused bourbon with maple syrup and optional chocolate-covered bacon (but is bacon ever really optional)? 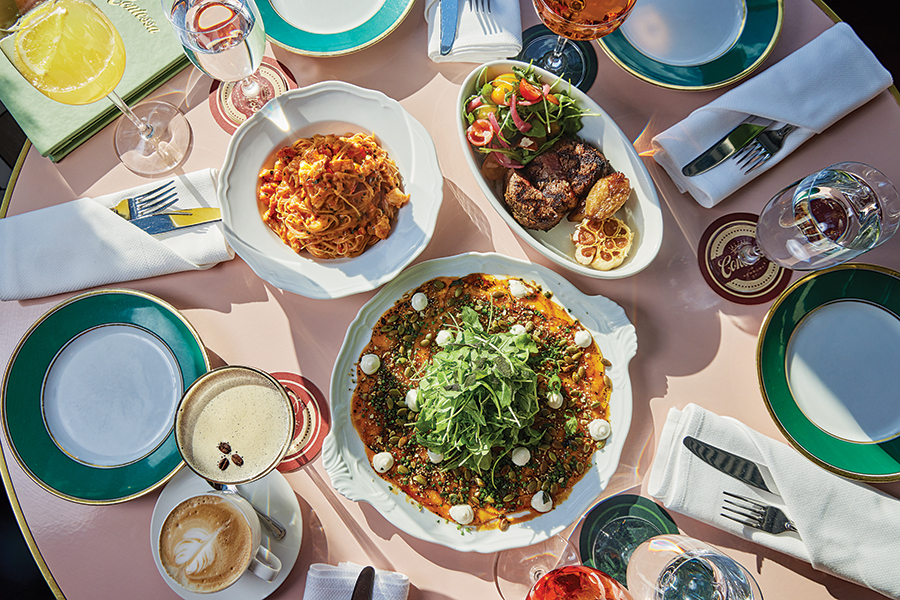 To kick back on a Sunday morning at Boston’s hottest new restaurant, you’ll need to snag a reservation about 30 days in advance. Once you ascend to the 17th floor of the glitzy Newbury Boston hotel to find sunlight streaming through the windows of the enclosed rooftop, you’ll understand why. Skip standard brunch fare in favor of dishes luxurious enough to match the ambiance: The elegant squash carpaccio, spicy lobster capellini, and tender filet al pepe nero make for a truly special-occasion way to start the day.

Also try: Bistro du Midi in the Back Bay for a dressed-up, French-inspired brunch with dishes like duck confit “foieffles”—a Belgian waffle with corn purée, maple syrup, and foie butter. 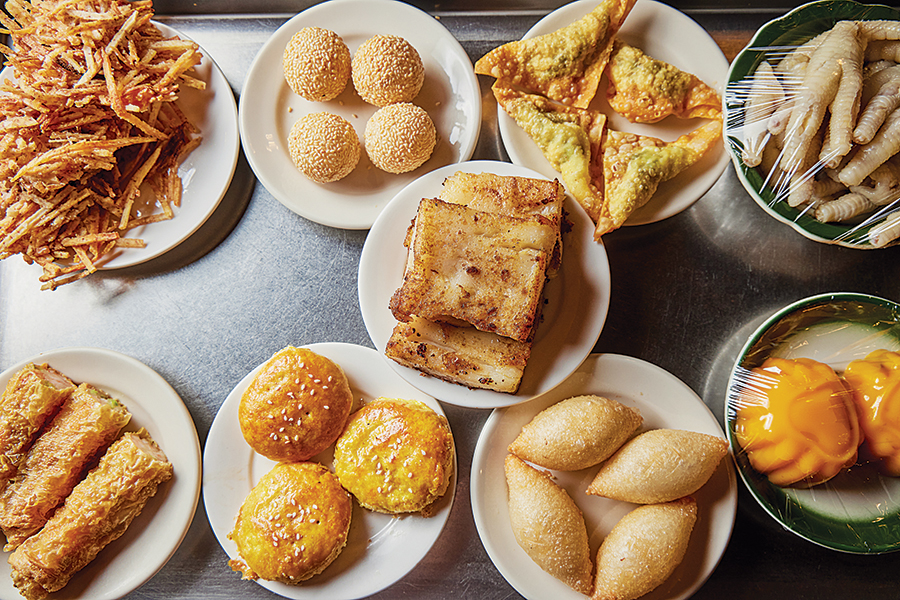 Walking upstairs to Empire Garden’s cavernous dining area—set in an eye-catching old theater, with many décor details still intact—is like stepping through a time machine (peep the pale-pink tablecloths and fabric-covered banquet chairs). But that’s all part of the charm. Soon, employees wheeling dim sum carts will rapidly show up at your table, offering plate after plate of plump har gow (shrimp dumplings), pork- and shrimp-stuffed shumai, cheung fun (steamed rice-noodle rolls), and countless other classic dim sum options. Pro tip: Go with a large group. This isn’t the brunch experience for an intimate date; you’ll need an enthusiastic crowd willing to try a little bit of everything.

Also try: Ming’s Seafood in Malden for an excellent dim sum experience north of the city. 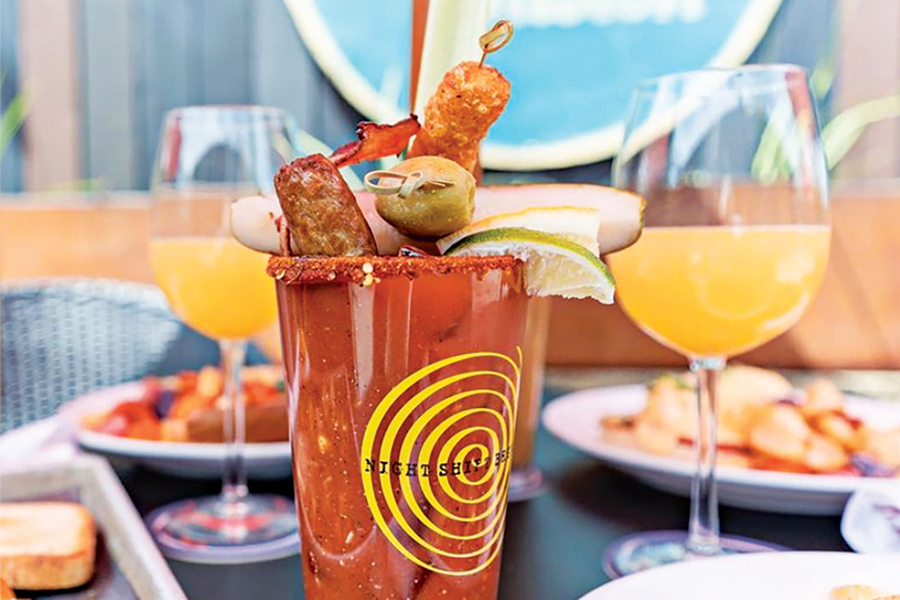 Coffee & Donuts
At the Broadway

Sweetened cold-brew with milk is spiked with Irish cream and Irish whiskey—and a skewer of doughnut holes.

A refreshing mix of tequila, strawberry, St. Germain, and bubbles, topped with a mini “Pop-Tart.”

Order it with the works, and it’ll be piled high with bacon, breakfast sausage, a pickle spear, blue-cheese olives, and a tater-tot skewer, plus a spicy rim.

You have to really like banana for this drink, which mixes banana whiskey with chocolate liqueur, Kahlúa, RumChata, espresso, and a chocolate-covered-banana-chip garnish.

Each of these drinks starts with iced coffee, chocolate liqueur, and chocolate whipped cream; the former adds caramel vodka and Twix crumble, while the latter has peanut-butter whiskey and Reese’s Pieces.

The Case for (and Against) Brunch

From the people who actually serve it.

It’s easy to see why diners enjoy brunch. After all, it’s a celebratory way to spend a Sunday morning with friends—an excuse to keep the weekend going with a come-as-you-are, day-drinking extravaganza. Bonus for parents: Most brunches, even at fancy spots, are family-friendly—no need to find a babysitter!

So why do restaurant workers famously hate the meal? For one thing, many employees work the dreaded “clopen”—a late-night closing shift followed by an early-morning opening shift—only to be rewarded with a morning of lower tips (a brunch bill tends to be much lower than a dinner bill) and extra work, like running around grabbing endless coffee refills. Still, “I don’t think the industry really hates brunch,” says one local kitchen veteran. “I think we’re just sleepy.” Indeed, several local restaurant workers told Boston they actually enjoy the brunch vibe, whether it’s the sunlight or the fact that a lot of diners are more relaxed than their dinnertime counterparts. (Except for those who come in demanding, for example, bottomless mimosas, which are a no-no in Massachusetts.)

First published in the print edition of the January 2023 issue, with the headline “Let’s Do Brunch!”