Meat, Meet Cheese: Here’s Where to Find (and Build) the Best Charcuterie Boards in Boston

Sometimes you’re hungry enough that you want to indulge in a single, sumptuous dish or dive face-first into a multi-course procession of plates. At other times, though, there’s something special about snacking on a communal splay of fine meats, cheese, and accoutrements—after all, especially in picnic and patio weather, it’s a delicious way to sample all sorts of domestic and imported flavors. With that in mind, here’s where to find the best charcuterie boards around Boston. File under: Graze anatomy. 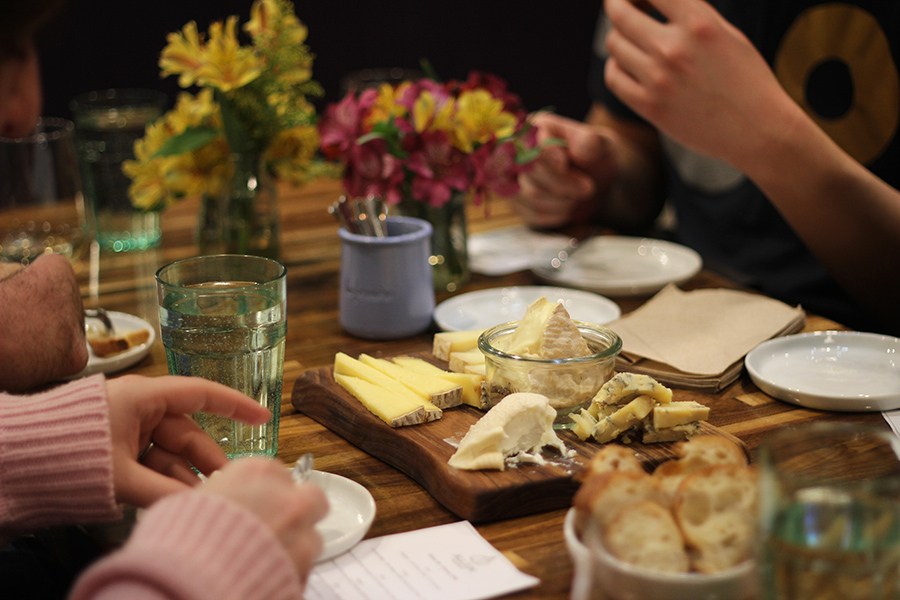 Once springtime hits Boston, picnickers start rolling out blankets and unpacking baskets in parks across the city. Show up those on the neighboring grassy knoll by pulling out a spread of enviable artisan foodstuffs from Allium—besides offering cafe sandwiches and salads, the place stays stocked with amazing cheeses (including vegan selections) and meats for pairing and noshing. Hey, creamy wild herb raclette and smoky kashar? Meet garlicky chorizo and fennel-spiked salami. Shake hands, you’re all friends now.

For those of us who grew up playing Oregon Trail on a Triassic-era computer system, the name “American Provisions” might conjure up images of a mercantile selling spare yokes and axels. (No? Just me?) Alas, while this pair of markets-slash-sandwich shops will not help you ford a river, it will help you create a hell of a charcuterie board with its selection of small-farm-raised meats and thoughtfully curated cheeses. You can also leave it to the experts to assemble small-group-sized platters—either way, toss in some American-made craft beers and ciders (or a bottle of natural wine) to wash it all down. Game over.

One of the newest dining operations to open at the Encore Boston Harbor casino is Cheese Meet Wine,  a charcuterie-centric concept. Here,  guests build their own boards from a distinctive selection of local and imported cheese, plus plenty of meats—from a bourbon and bacon salami produced by Massachusetts’ own New England Charcuterie, to 24 month-aged Prosciutto di Parma imported from Italy. The whole assortment is curated by chef Kyle Bradish, who earned plenty of experience working with unique and hard-to-find cuts as the former sous at Rare, Encore’s steakhouse. At Cheese Meet Wine, he also pulls together a list of tinned seafood (crack open a tin of spiced Portuguese octopus in olive oil, perhaps) and other small nibbles. And as the name suggests, there’s plenty of wines red, white, rosé, and fortified wines for pairing. 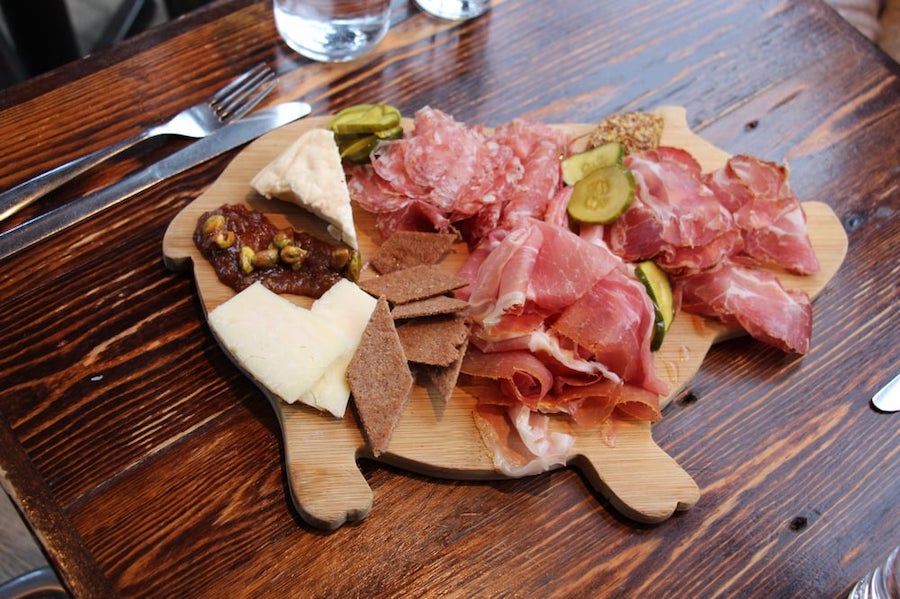 Charcuterie at Coppa. / Photo by Tiffany L. via Yelp

Chef-owner Jamie Bissonnette has long been one of Boston’s best-known experts in nose-to-tail dining, so it’s no surprise that his South End enoteca would serve some of the finest quality soppressata, duck prosciutto, and of course, coppa in the city. Enjoy it at a sun-drenched seat on Coppa’s street-corner patio, and while you’re at it, pair with a cheese plate (right now it’ll highlight robiola, pecorino and gorgonzola) as well as a springy spritz made with the restaurant’s own fruit-forward amaro, mandarin liqueur, and a splash of Prosecco. 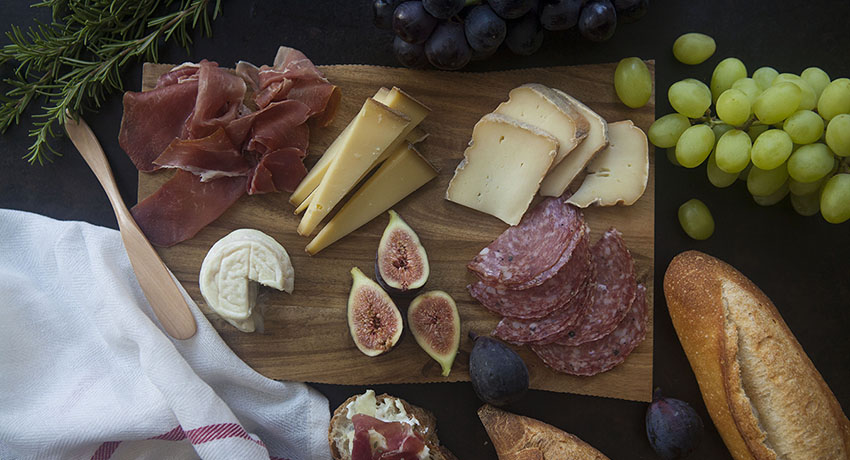 A board from Curds & Co. / Photo by Aynsley Floyd

You don’t even need to visit this Brookline cheese shop to get the best rinds around: Simply subscribe to its Curdbox program to have a selection of unique cheeses delivered to your doorstep every month. (There’s always a different theme, from “Too Gouda to Be True” to the “Little Italy” assemblage of Boot-made delights.) Still, it’s a lovely experience to step inside the shop—or visit its Boston Public Market outpost—to browse firsthand the region-spanning cheeses and cured meats, which cover everything from salty Serrano ham to peppery pancetta.

Warning: Do not enter Eataly while hungry. If you do, there’s no telling how heavy a basket you’ll fill with the emporium’s Italian groceries, prepared foods, and massive selection of topnotch meats and cheeses that arrive ready-to-buy from local farms or are sliced fresh at the glass-cased counters. If you’d rather satisfy your appetite on site, though, you can simply pull up a seat at La Pizza & La Pasta, one of Eataly’s several in-house restaurants. There you’ll build your own board from a menu that includes creamy, Connecticut-made ricotta; beech wood-smoked speck straight from Val Venosta; and accoutrements like EVOO-soaked roasted grapes and a pistachio- and peperoncini-based pesto. 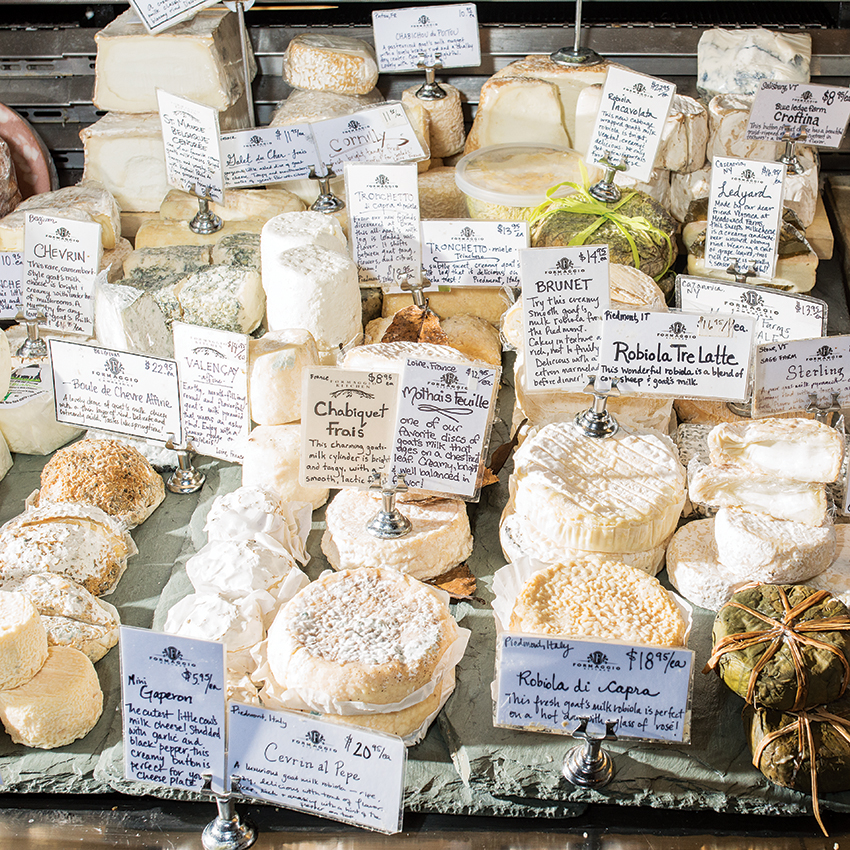 There’s a reason that Formaggio Kitchen is famous (and our most recent Best of Boston winner in its category): There’s almost nothing a cheese-head won’t find between its three locations, including a recently relocated (and newly expanded) Huron Village shop. After all, these artisan wheels come from around the world—Belgian gouda, German blue, and English cheddar are all on the agenda. There are imported meats, too, but stick close to home with the house-made charcuterie; Formaggio’s own rabbit pâté and boudin blanc sausages are as fine as you’ll find anywhere.

The name (sorta) says it all: Yes, you’ll find fromage up the wazoo and expert-paired glasses of red, white, and rosé. That said, the excellent bottles and boards—such as the French cheese-focused “Tour De France”—are equaled by the charcuterie platters. The superlative salumi tastes great as is, though we also love when the restaurant side of the ampersand invokes it for prepared plates. See the “antipasto bites,” salumi cups that are filled with prosciutto, marinated veggies, truffle cheese, and more. 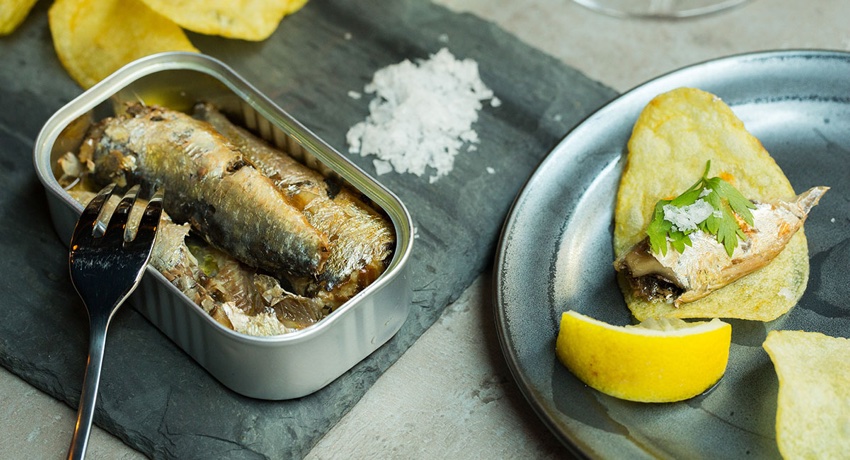 If you like your wine and charcuterie served with a side of ’90s hip hop, you’ll probably enjoy the “Bone Thugs & Charcuterie” selection (as well as the overhead soundtrack) at this savvy downtown boîte. Chef Alex Bohjwani, who also does wonderful things with the snack-sized “Biggie Small Plates” and handful of other shareable dishes, explores charcuterie in his own clever ways—lamb tartare, for instance, is particularly fantastic when remixed with rhubarb agrodolce, fried garlic, and capers. But you can also mix and match your own combos of, say, mortadella and chicken liver mousse with goat, sheep, and cow cheeses. And for a seafood-style spin on things, net yourself something from the stellar collection of tinned fish, including mackerel packed in a spicy piri piri sauce and tender tuna fillets in luscious olive oil. 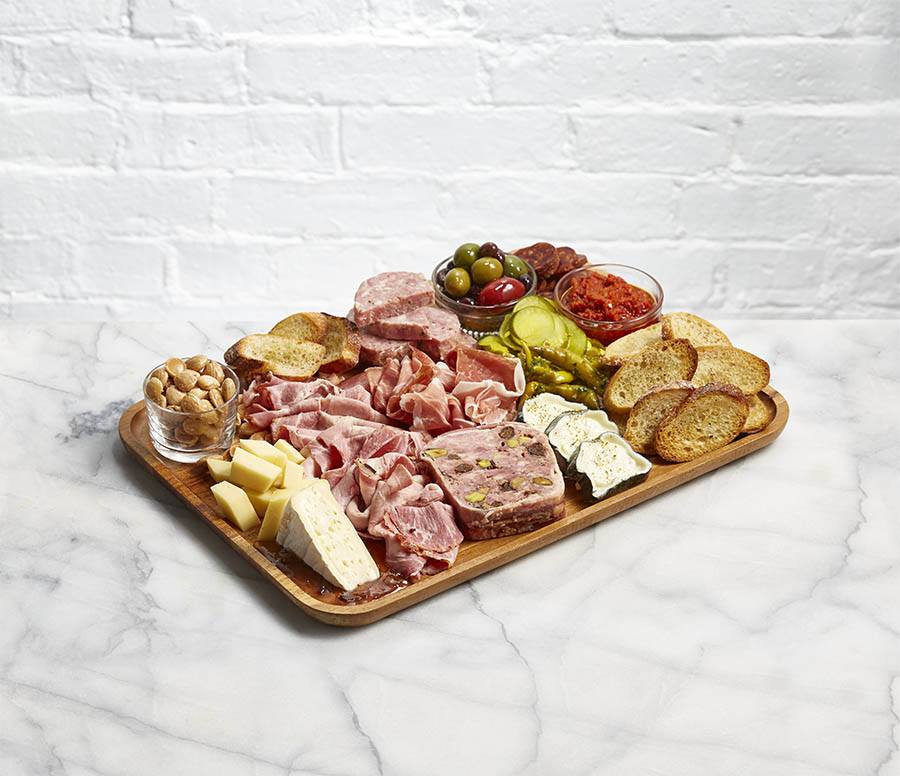 Charcuterie from the Salty Pig. / Photo by Nina Gallant, styling by Elle Simone

When it reopens in the spring, this Back Bay beauty (which happens to boast one of the top patios around) will have a freshly renovated interior. One thing that won’t have changed, though, is the commitment to curating a city’s-best assortment of salty pig parts and local and imported cheeses. On the former front, favorites from past menus include the pancetta-encased lamb with pistachio and dried Mexican chiles; among the latter offerings, the grassy, Alpine-style Tarentaise cheese and milky Mad River Blue have been standouts.