Here’s Where to Find the Best Clam Chowder in Boston

From creamy classics to subtly chef'd up takes on the New England favorite. 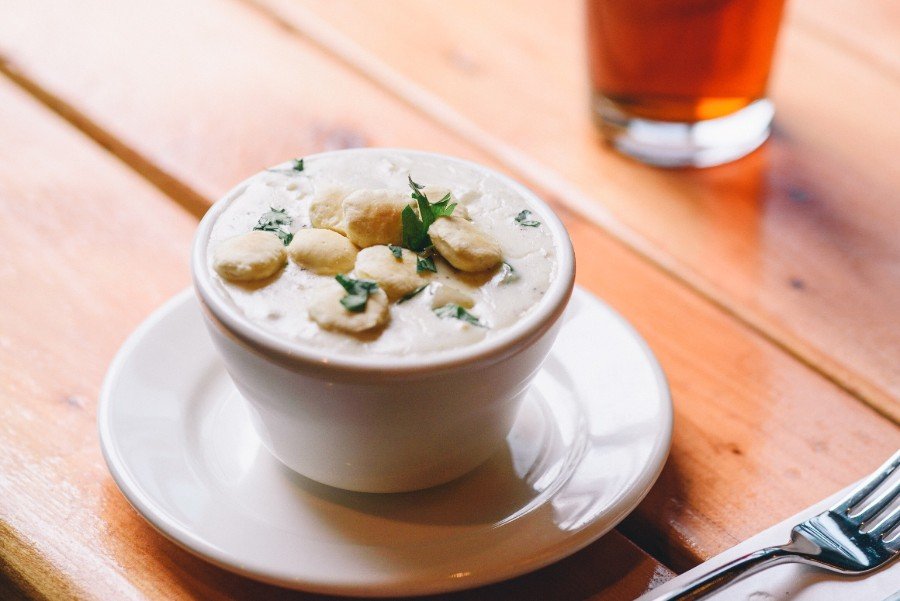 Hot stew in the summer? In Boston, absolutely. It can be 85 degrees outside, and a typical New Englander will have zero problem with ordering a warm cup of clam chowder on a sun-soaked patio. After all, this is the time of year when we find ourselves daydreaming about cashing in vacation days for a quickie day-trip to the beach, complete with a stop at a chowder-slinging seafood shack. When you can’t escape to the Cape, though, these Boston restaurants are serving the city’s best bowls of the stuff, from the creamy and classic to lightly chef’d-up takes. [Updated July 1, 2020]

Served up for decades near the Boston Marathon Finish Line in the Back Bay, this classic recipe is also available daily in a bread bowl.

Unctuous bacon lardons and croutons with a subtle kick are the new traditions acclaimed chef and South Boston native Barbara Lynch brings to the table at this South End neighborhood spot.

A party deck full of nautical tchotchkes, cold beer, and fried seafood is a beacon for tourists, sure, but it’s also just what we want sometimes—especially with a starter of clam chowder. This longtime favorite cup continues to impress with depth of flavor, achieved by sautéing fresh quahogs, then poaching them in white wine and aromatics. 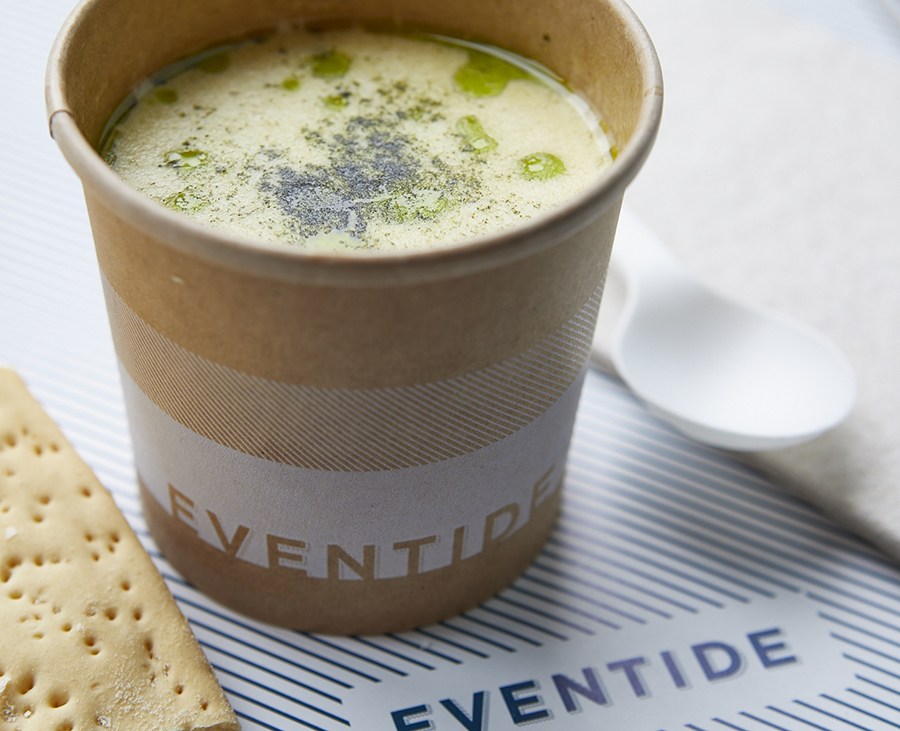 This modern New England seafood counter presents a brothy cup of soup flavored with kombu (an edible seaweed) and smoked butter, full of large clams and pieces of salt pork. We expect nothing less from the James Beard award-winning chefs who gave New England a Maine lobster roll-style bao bun. 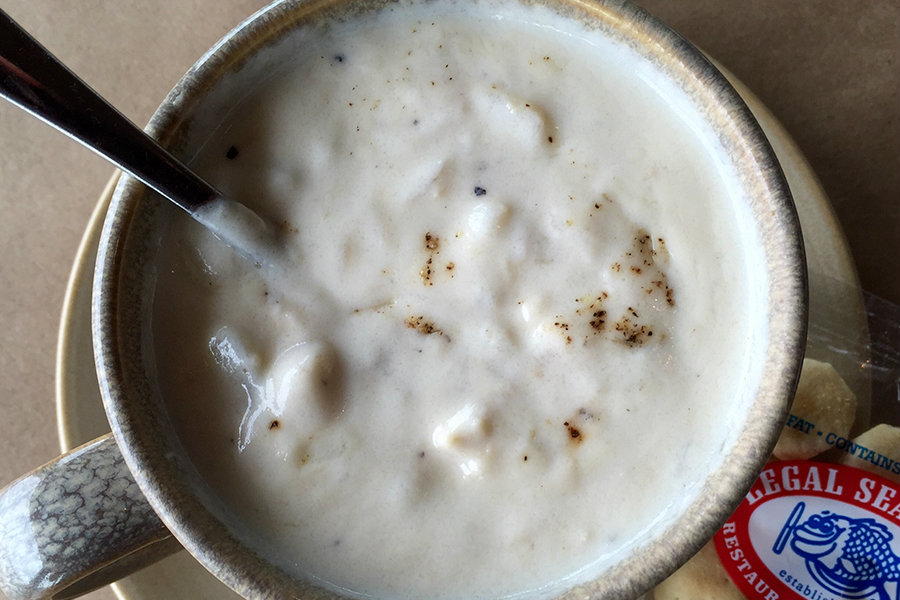 Thick and richly flavored with salt pork and herbs, this perennial favorite is as delicious as it is iconic. The recipe developed in Cambridge has been on the seafood company’s menus since 1981. It’s ladled into cups at Fenway Park, and it was served at six consecutive presidential inaugurations.

Visit this New American addition to Medford and you’ll discover a few new things: one of the coolest new patios in the Boston area, hard-to-find (around here) Detroit-style deep dish pizza, and some hearty, creamy clam chowder loaded with carrots, potatoes, celery, and smoked bacon.

This New York-born counter-service chain takes pride in using seafood from the cofounder’s hometown port in Maine, and other sustainable sources—so you can feel even better about adding on a cup of this creamy, flavorful soup to your lobster-roll combo order. 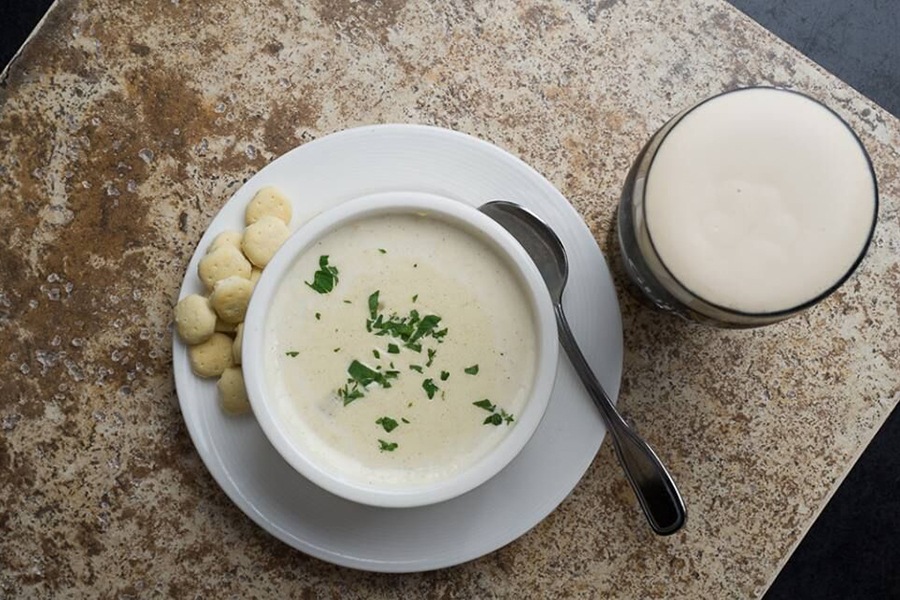 Indeed, you can do much worse than this Quincy Market Irish pub (and nighttime club) for an authentic taste of New England clam chowder. The slightly sweet, almost buttery bowl is a Hall of Fame chowder for good reason.

Over in the North End, a neighborhood probably better known for Italian wedding soup and pasta e fagioli, seafood landmark Neptune Oyster continues to keep spoons full of amazing New England clam chowder. The creamy, thyme-spiced stew is filled with salt pork and clams harvested off the coast of Wellfleet on the Outer Cape, where the cold, clean waters yield exceptional examples.

Here you’ll find one of the city’s best lobster rolls, fried oyster or clam plates, and a classic chowder with bacon, potato, celery, and a bit of brightness thanks to fresh bay leaves and other herbs.

This North End institution has been serving up waterfront views and overflowing mugs of dill-flecked chowder since 1984, and it’s still one of the best cups in the city.

If you want your chowder served on one of the best patios around (maybe the best in the Back Bay) head to Saltie Girl’s sidewalk-side setup. The sunken patio affords both ample people-watching and a bit of privacy—you’ll want it when you’re planting yourself face-first in bowls of chowder with baby potatoes, smoky bacon, and subtly herbaceous salsify. (On second thought, this is a classy joint that serves caviar on its pizzas, so try to hold off on acting like an animal.) 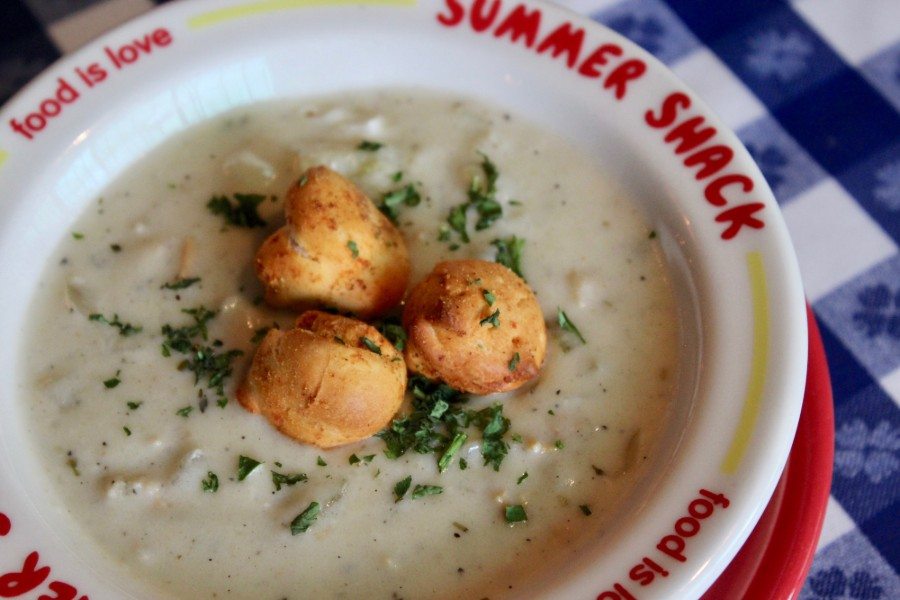 At his self-titled waterfront restaurant in the 1980s, chef Jasper White became a leader of Boston’s culinary revolution. His seafood skills are still on the scene at a couple locations of Summer Shack, which serves this beloved bowl of medium-thick chowder with cherrystones and chives. 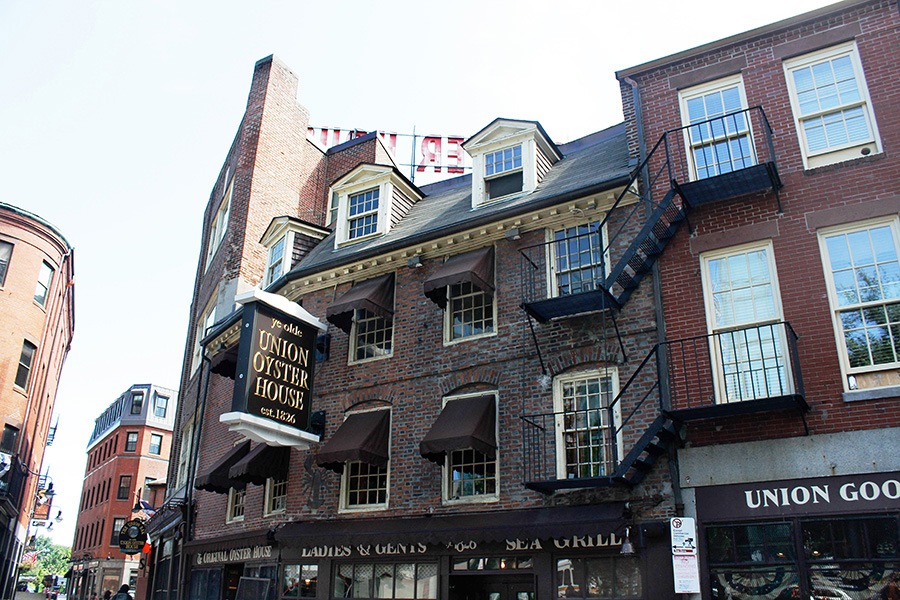 Union Oyster House. / Photo by Simone Migliori for “The 100 Best Buildings in Boston“

Still rich, clam-packed, and satisfyingly salty, this soup has been a menu mainstay since the 1800s.

Yankee Lobster’s chowder is “reminiscent of a holiday in a bowl,” whatever that means, according to America’s foremost authority on clam chowder and erstwhile Charlie’s Angel Drew Barrymore. The star of the ’05 Red Sox flick Fever Pitch got another taste of Boston on her talk show recently, when a “Battle of the Bites” segment highlighted three Hub chowders belonging to Legal Sea Foods, the Sail Loft, and Yankee Lobster Co. If you want to find out who wins, you’ll have to watch the clip yourself—it involves lots of entertainingly awkward small talk and the intermittent cooing of “mmm!” Props to Yankee, though, for what Barrymore describes as an “amazing mirepoix-type of taste.” Good enough for Gertie, good enough for us.