At This Belle Mer Wedding, The Bride Wore Two Gowns and Celebrated Her Birthday at Midnight

The couple also had a stunning sweetheart table surrounded by vibrant florals. 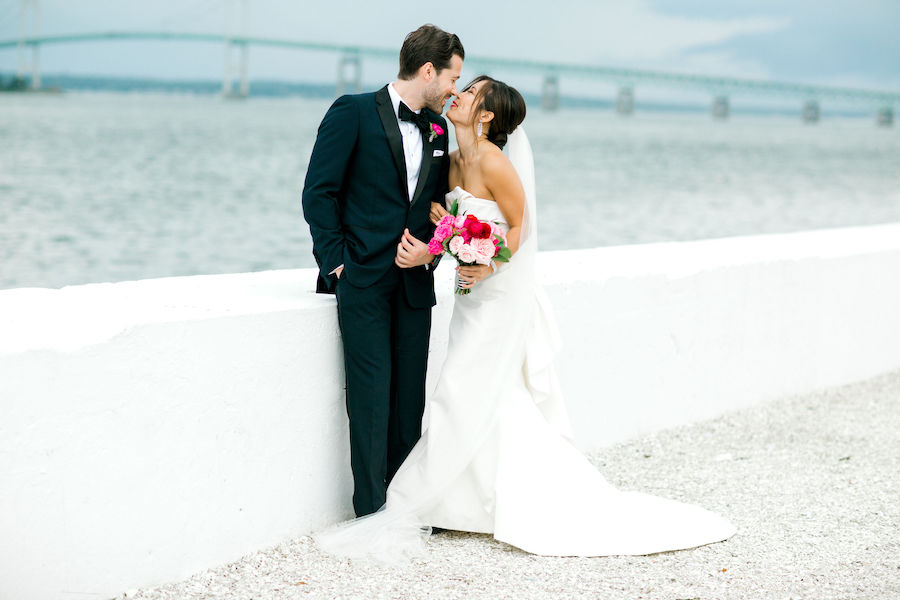 As Joanna Chow and Bret Anderson headed to Alden & Harlow in Harvard Square for their first date, they were both “somewhat skeptical, but optimistic,” Joanna says. They were in their late 20s and early 30s, respectively, and had met on the dating app Hinge around Thanksgiving in 2014. Based on their profiles, he thought she looked “friendly and bubbly,” Joanna says, and she thought he was “really handsome” but was also “wary that he was a Dartmouth frat boy and that we wouldn’t have that much in common.” Their apprehensions were unfounded, as it turns out, and the two hit it off right away. “We wanted to see it move further and then we went into this flurry of the holidays, so it was actually fairly slow moving in the beginning,” Joanna recalls. “I think that allowed us to take the time to get to know each other and pace ourselves a bit.”

Their relationship followed the “predictable timeline” Joanna says, and over the next couple of years the couple introduced each other to their families and traveled to locales such as Mexico City and London. In May 2017, Bret, a consultant, had just wrapped up a long period working overseas, so he suggested they take a trip together. He asked Joanna to choose their destination, and she picked Paris, where she’d studied abroad years earlier. Before they departed, Joanna asked Bret if he was going to propose on the trip. “I just wanted to manage my own expectations,” she explains. “Of course, he had to say no.” When they touched down in the City of Lights, they hit the pavement to do some sightseeing. They were on the Pont de Bir-Hakeim bridge when Bret said they should ask someone to take their picture. There was a photographer with a DSLR camera nearby, so he suggested they ask her. “He kept trying to say, ‘Lets ask the photographer. [She’s] probably good at taking photos,’ but I really didn’t want to disturb her artistic process,” Joanna says. “Finally she was the only person around, so he was like, ‘Okay let’s ask.'” As the photographer (whom Bret had actually hired to capture the proposal) readied to take the couple’s picture, Bret got down on one knee. “He said something like, ‘We’ve taken a lot of great photos, but there’s one last shot I want to get,'” Joanna recalls.

When the couple began planning their celebration, their primary goal was to throw a killer party. “We’ve been to a ton of weddings at this point and really love having a good time,” the bride says. They’d seen their chosen band, Hot Mess, at another wedding years before and both agreed that if they ever got married, they’d hire them. The couple’s venue, meanwhile, was a compromise between their differing personal styles: “He likes a very contemporary, clean aesthetic, while I—[having grown] up around here—am all about the charm and history,” Joanna says. When they saw Belle Mer, they were attracted to both its natural beauty and modern look. As a nod to Joanna’s Chinese heritage, which designates red as a lucky color, the couple filled their reception space with florals in bold and bright hues. They also chose their wedding date based on Chinese tradition, which Joanna says denotes “81818” as a symbol of prosperity. The other perk of their August 18th wedding date? Joanna’s birthday is the next day. So, at midnight, the couple and their 240 guests celebrated with ice cream cake and singing. “We were grinning, they were grinning. There was just a lot of love in the room,” Joanna says. 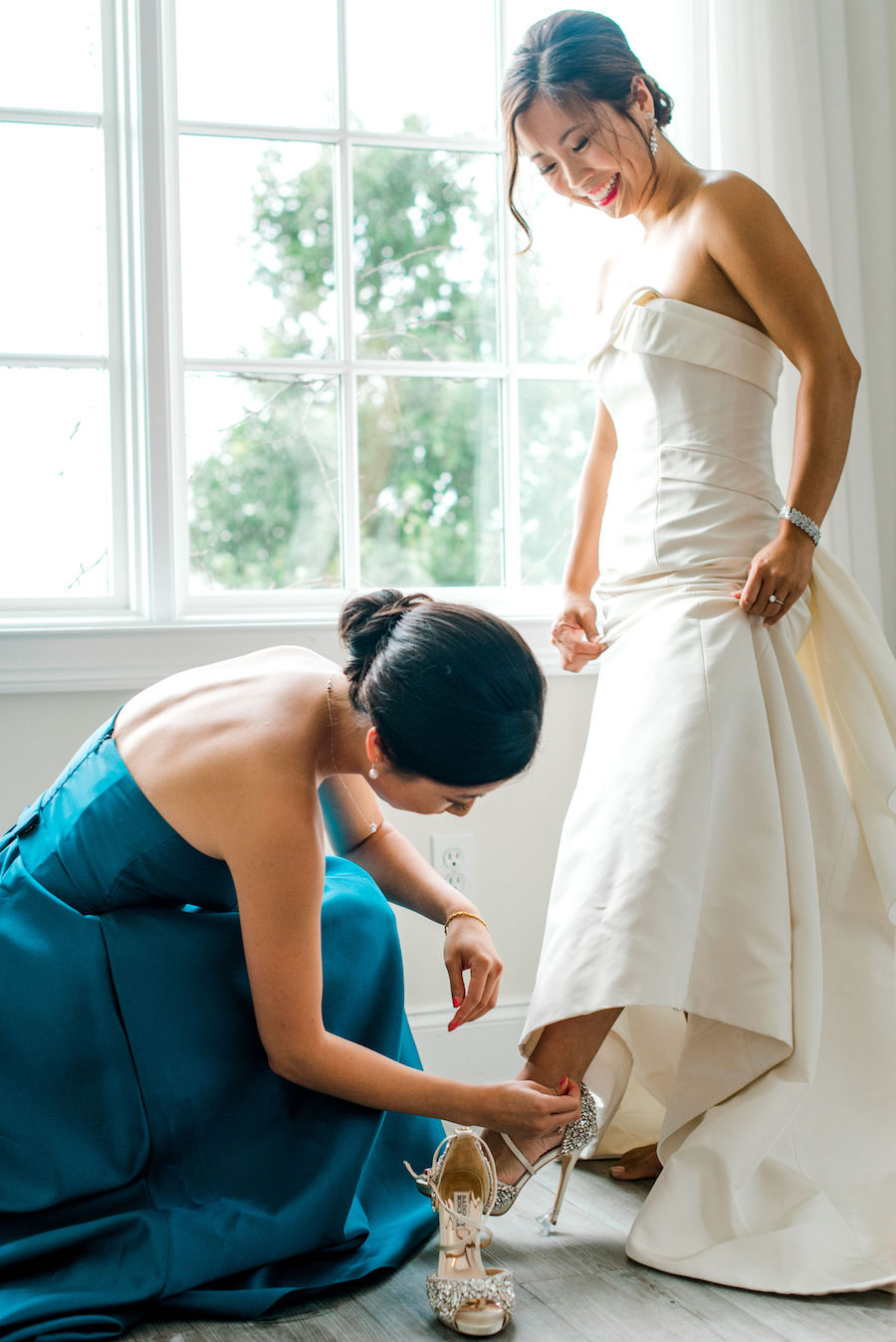 Joanna found her Carolina Herrera gown at Ľélite Bridal Boutique on her first dress-shopping excursion. Though she visited a few other shops after that initial appointment, she eventually returned
to the Newbury Street store for the strapless frock. “I wanted something really clean and architectural, and that’s exactly what I ended up choosing,” the bride says. 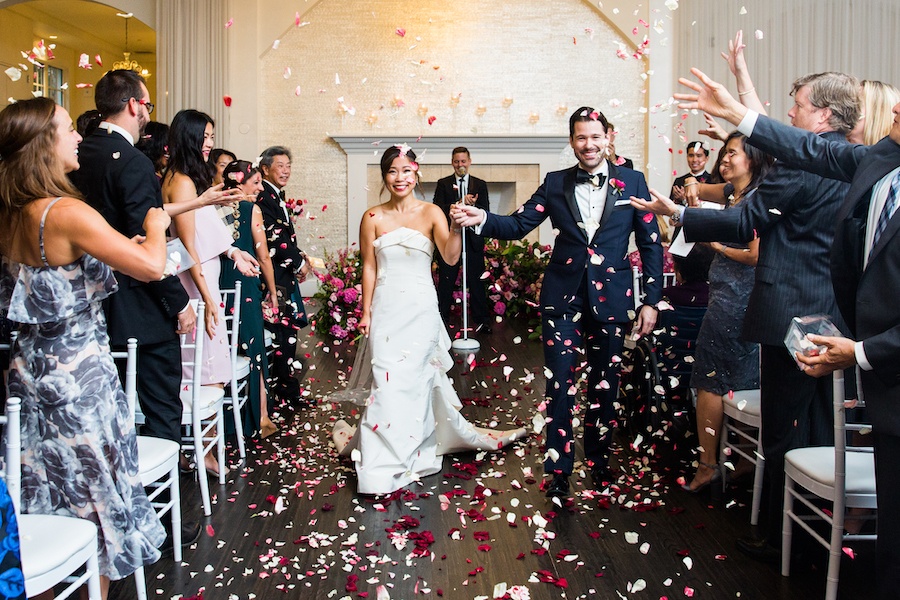 Joanna and Bret’s ceremony was officiated by one of Bret’s best friends, Paulo, who is also one of the groom’s coworkers. 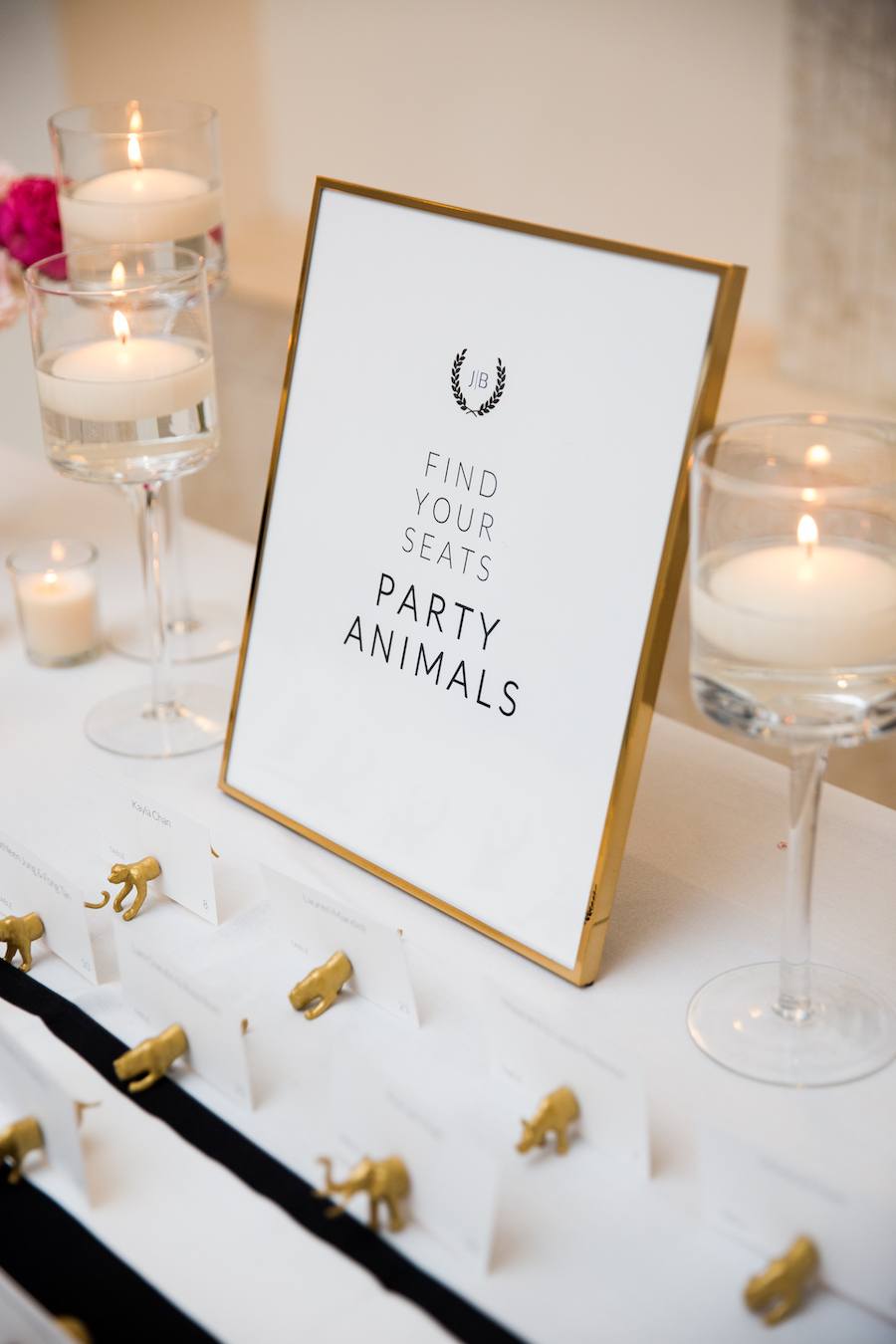 “We just wanted to find fun moments at the wedding [to] really express that we wanted this to be a good time,” Joanna says of the couple’s magnetic, animal-shaped escort-card holders. 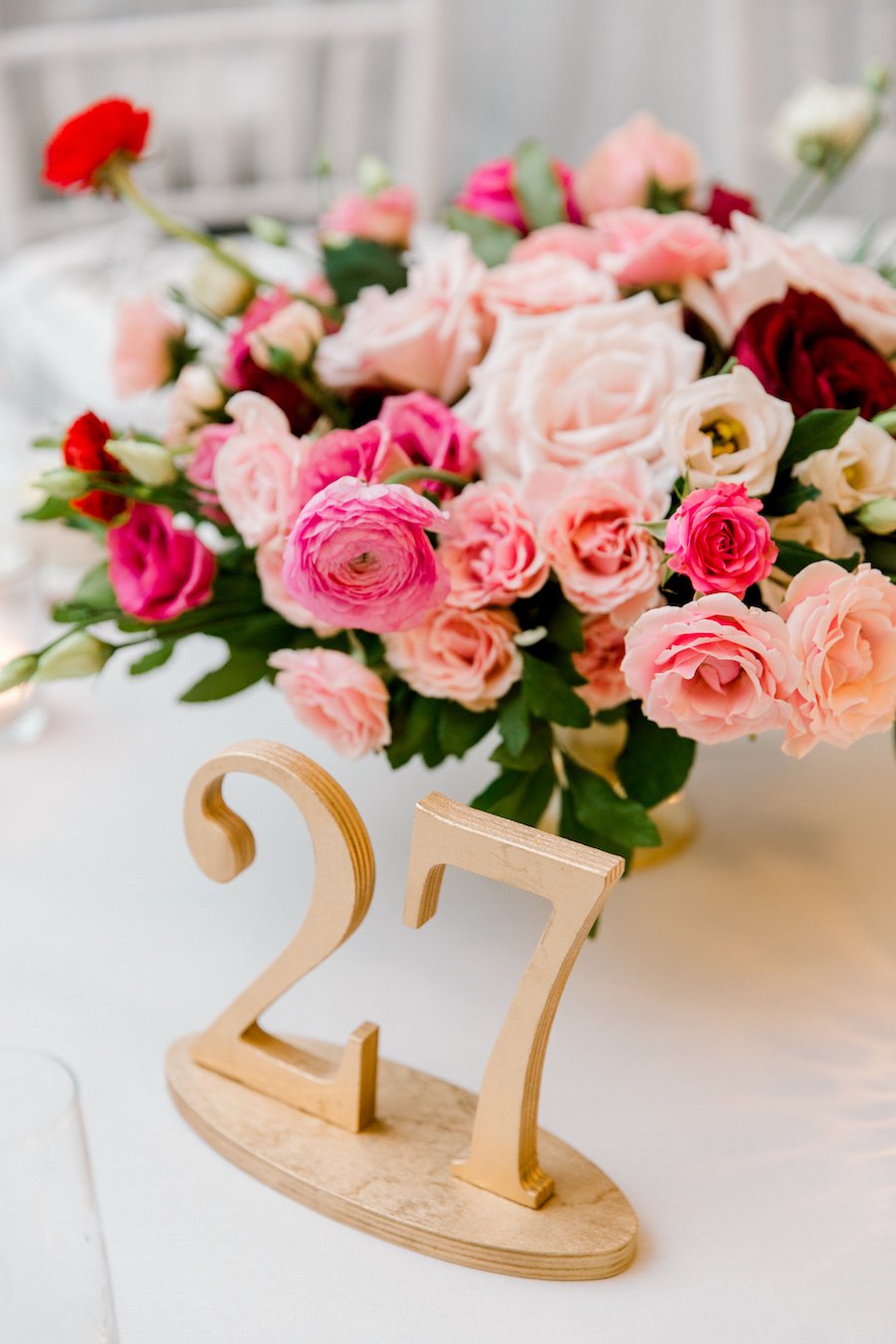 “I think the trend right now is a lot of blush tones and paler floral palettes, so one of the challenges I [faced] was trying to balance traditions,” the bride explains. “In the Chinese tradition, white is not a particularly lucky color—red is far more lucky. So I was trying to incorporate red into the palette without it feeling like a Christmas wedding in August.” 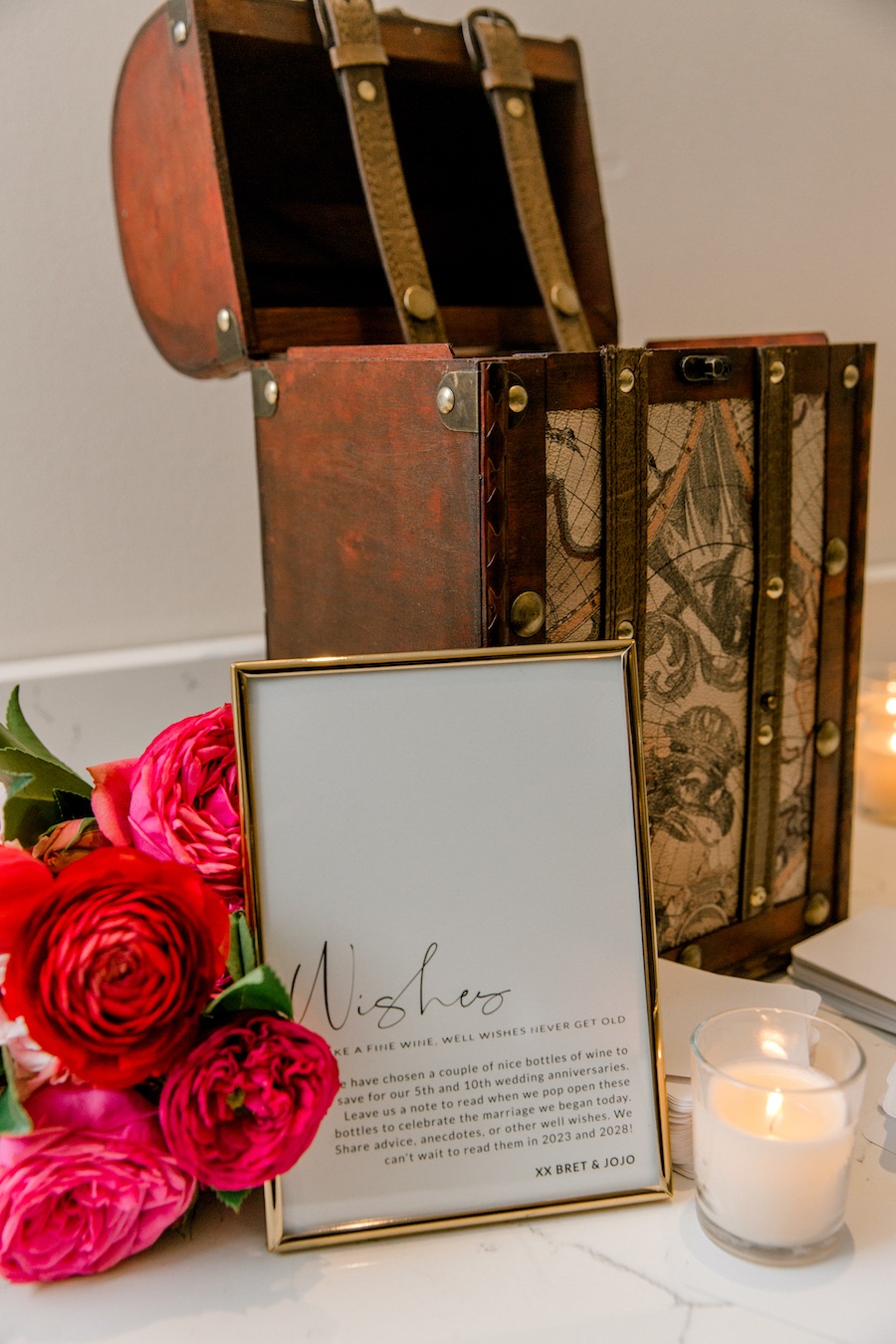 Since Bret is “a huge oenophile,” Joanna says, the couple filled a wine chest with bottles to open on their fifth and tenth wedding anniversaries. At their reception, the couple invited their guests to drop notes with wishes and advice inside for the pair to read in 2023 and 2028. 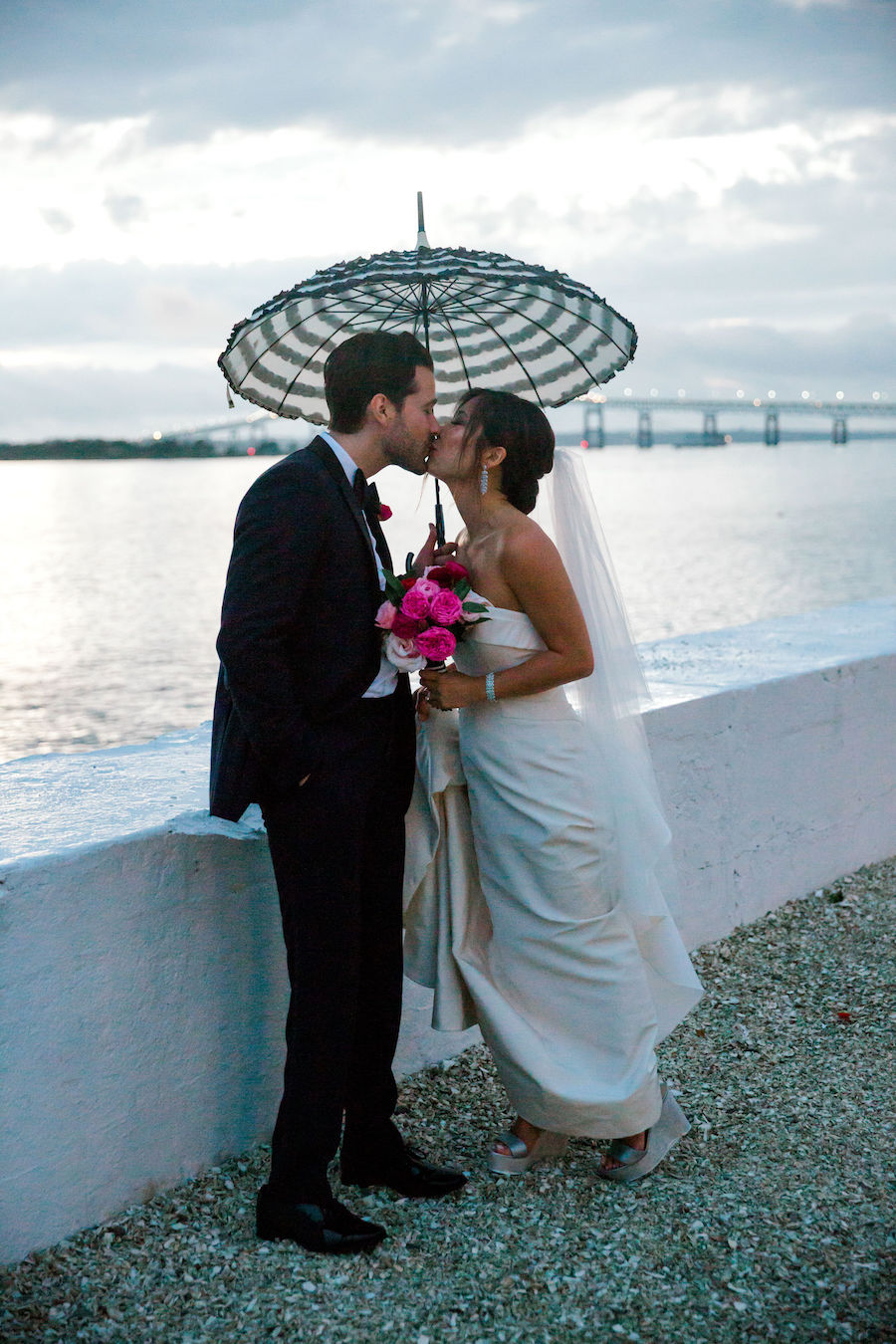 A thunderstorm rolled in just before the start of the couple’s ceremony, so they decided to move the celebration inside. “No bride plans her wedding with rain in mind, but I think it ended up being something distinctive about the day,” Joanna says. “It actually made for a really celebratory feeling. As soon as the ceremony was over, the rain cleared and there was this beautiful sunset.” 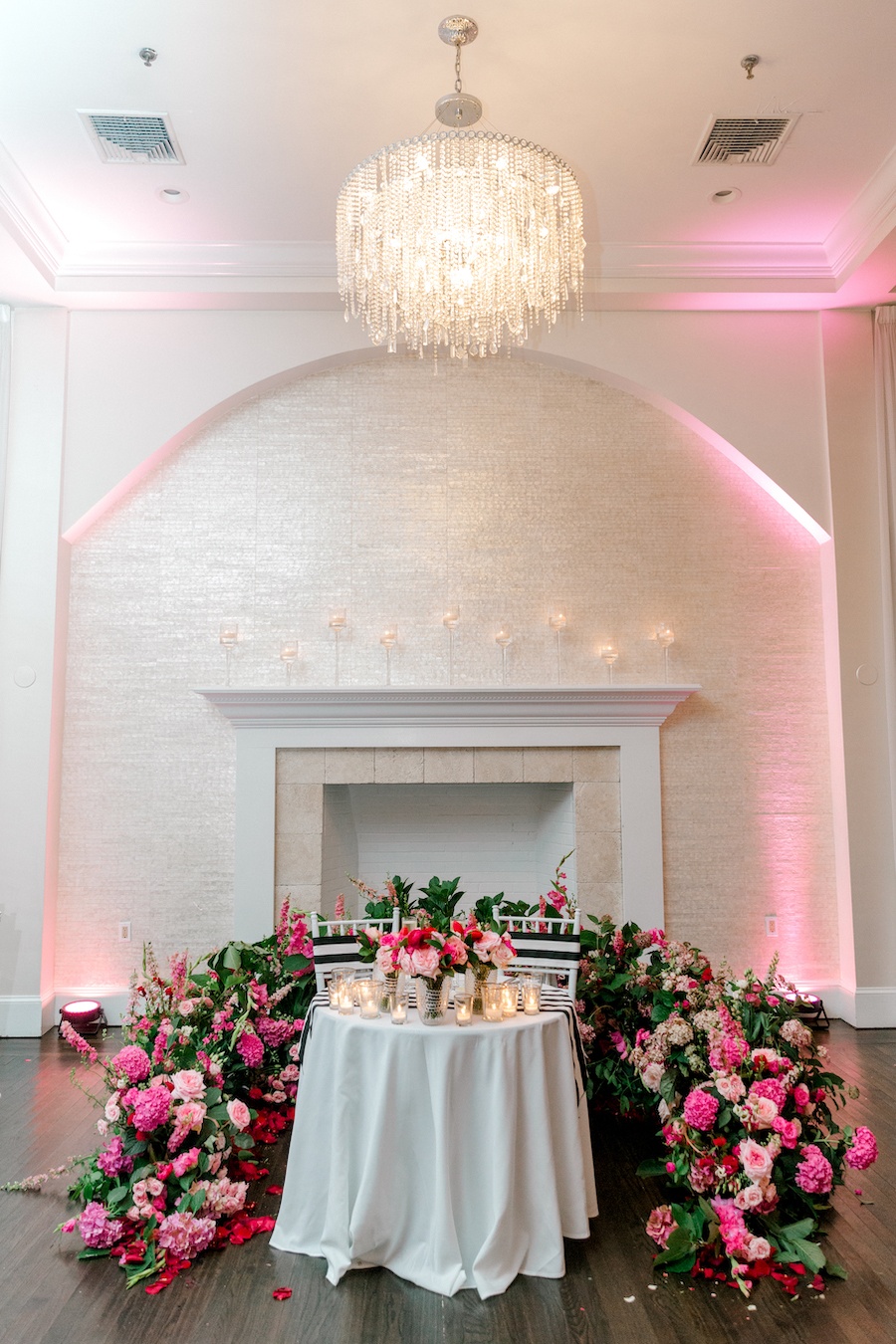 At their ceremony, Joanna and Bret tied the knot in front of a floral installation rather than an arch or an arbor. Later, at their reception, the ring of flowers doubled as a colorful backdrop for the couple’s sweetheart table. 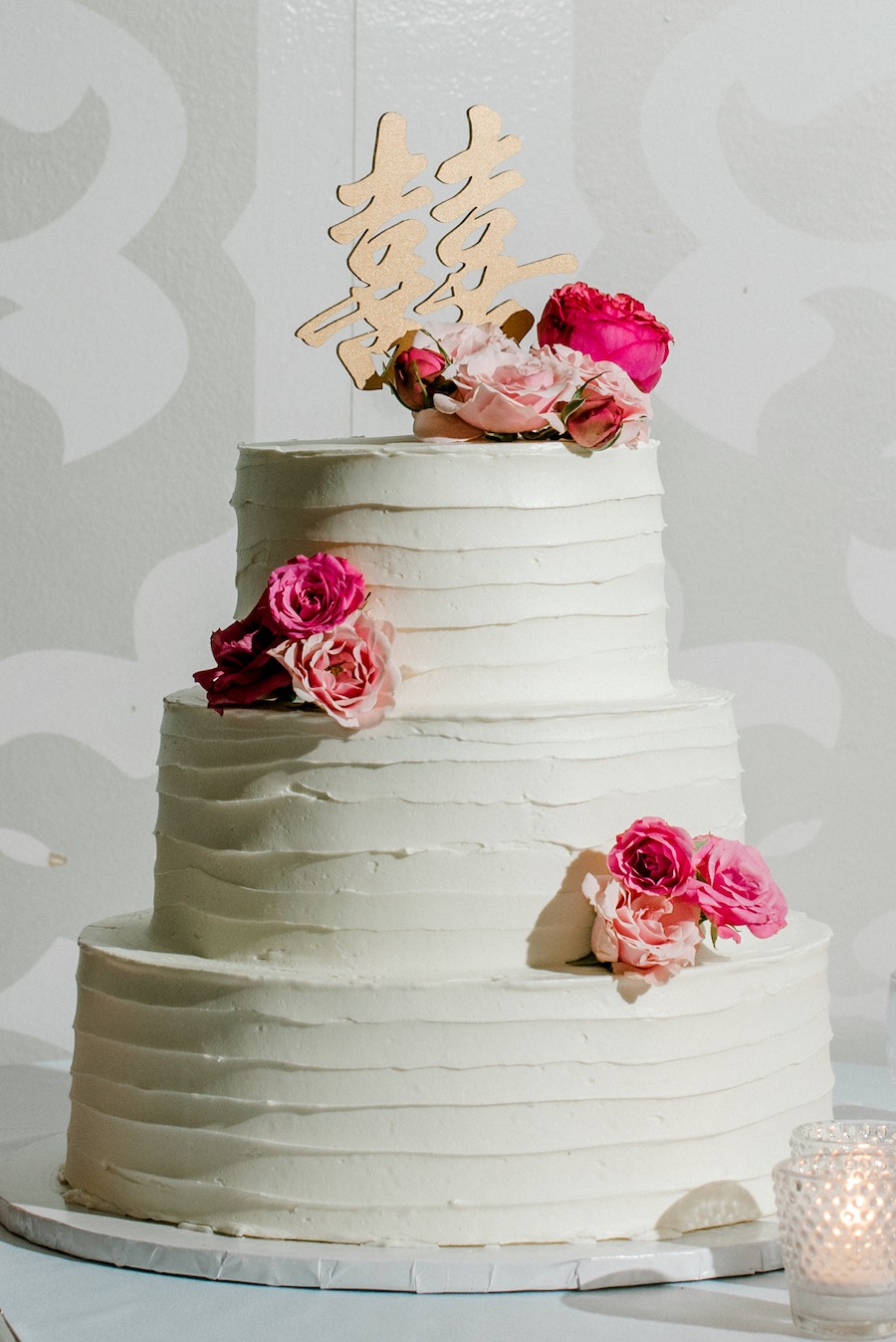 Joanna and Bret’s cake—frosted with Heath-bar-crunch buttercream-—was topped with the Chinese symbol for “double happiness,” a customary decoration at many Chinese weddings. 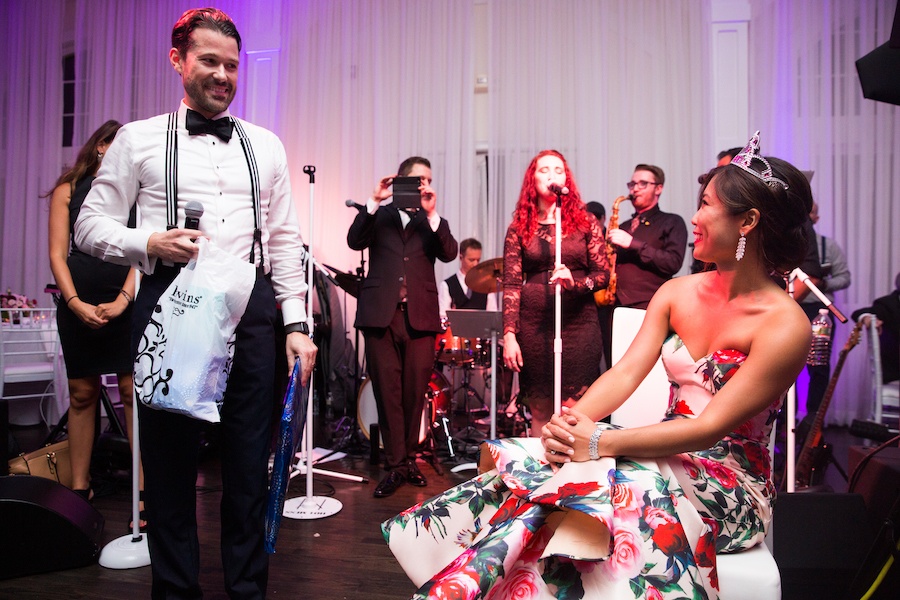 Before guests gathered around the dance floor to celebrate her birthday, Joanna donned her second gown of the night—a cheerful floral dress, which she also wore for the couple’s engagement shoot in Paris.  “Everyone sang ‘Happy Birthday’ and I blew out the candles on an ice cream cake. Bret made a really nice speech and gave me some gifts,” Joanna says. “Then we just resumed the second half of dancing.”