40 Extra Guests Showed Up to This Hyannis Port Wedding

The tented reception at a family estate was beyond romantic. 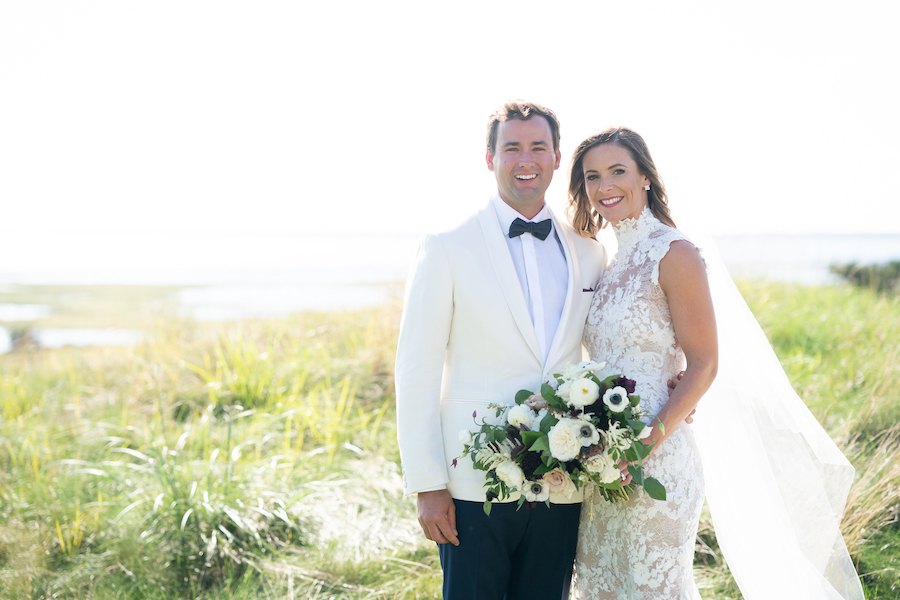 Taylor Tobin and Drew DeLorey knew each other for years before they started dating. Drew and Taylor’s older brother Patrick had met as young boys in a summer hockey league on Cape Cod, where Taylor’s family live and where Drew spent his childhood summers. “I always knew Taylor from a distance,” Drew says. In 2015, Patrick invited Drew to come along for an annual July 4 party-bus trip to the Beachcomber in Wellfleet with a group of friends. “I didn’t know too many people on the bus so I was hesitant to go,” Drew recalls, “But I was like, ‘Who’s going? Is your sister going?’ And he said ‘Yes,’ so I [did, too].” Drew and Taylor spent most of that day together, enjoying themselves while playing spike-ball and throwing around a football on the beach. The two didn’t see each other again until a month later, when their paths crossed at Hyannisport Club, the golf club their families belong to, and then again at a wedding a month after that. “We danced the night away and had a blast,” he says. Shortly after the wedding, unbeknownst to Taylor, Drew called Patrick to ask if it would be okay if he took Taylor out on a date. “I was like, ‘You did what?!'” Taylor recalls. “But chivalry is not dead, and Drew wanted to do right by his friend before we started going out, which I thought was super sweet.” Fortunately, Patrick gave the two his seal of approval, and they soon started dating.

Just shy of two years after they became a couple, Taylor and Drew were living together in Boston. One afternoon in August 2017, they headed to an annual party at the West Beach Club, where Drew’s mom is president. “There was a lot going on that day,” Taylor says. “But in retrospect, Drew seemed a little more excited than usual.” He suggested that, before the party, they stop at the Hyannisport Club for a drink first. Taylor says she was confused, since there would be drinks at the beach party, but ultimately decided the beautiful sunset they’d be able to see at the golf club was a good enough reason to go along with the plan. When they got there, Drew got down on one knee by the driving range. “I was shocked,” Taylor recalls. Afterward, at the beach party, around two dozen of their friends were waiting to surprise them and celebrate.

Even before the couple got engaged, they already knew where they’d hold their reception: Drew’s aunt and uncle’s yard in Hyannis Port, which features a sweeping lawn, a pool area for cocktail hour, and is right across the street from Taylor’s family’s home. “We’d walk past it and say, ‘That’d be a great place to throw up a tent,'” the bride recalls. The other element that’d been chosen before Drew even popped the question? Their wedding band, Hip Pocket Orchestra, who had been playing at the annual West Beach Club party for over a decade. Having a band that they knew was a crowd-pleaser was key because, as Taylor says, the couple ultimately “just wanted [the wedding] to be a big party.” And, under a sailcloth reception tent decorated with star-shaped lanterns, tall candles, and romantic florals, that’s exactly what they got. After the more formal parts of their reception, the couple opened up the event to other friends in town—about 40 of them. “We said, ‘Come enjoy,'” Drew recalls. “The whole town was a party until late in the evening.” The band played until midnight (an hour later than they’d planned) and the couple didn’t Uber back to their hotel until 3 a.m. “I think we had permanent smiles on our faces all weekend, which somehow never allowed us to really feel tired,” Taylor says. 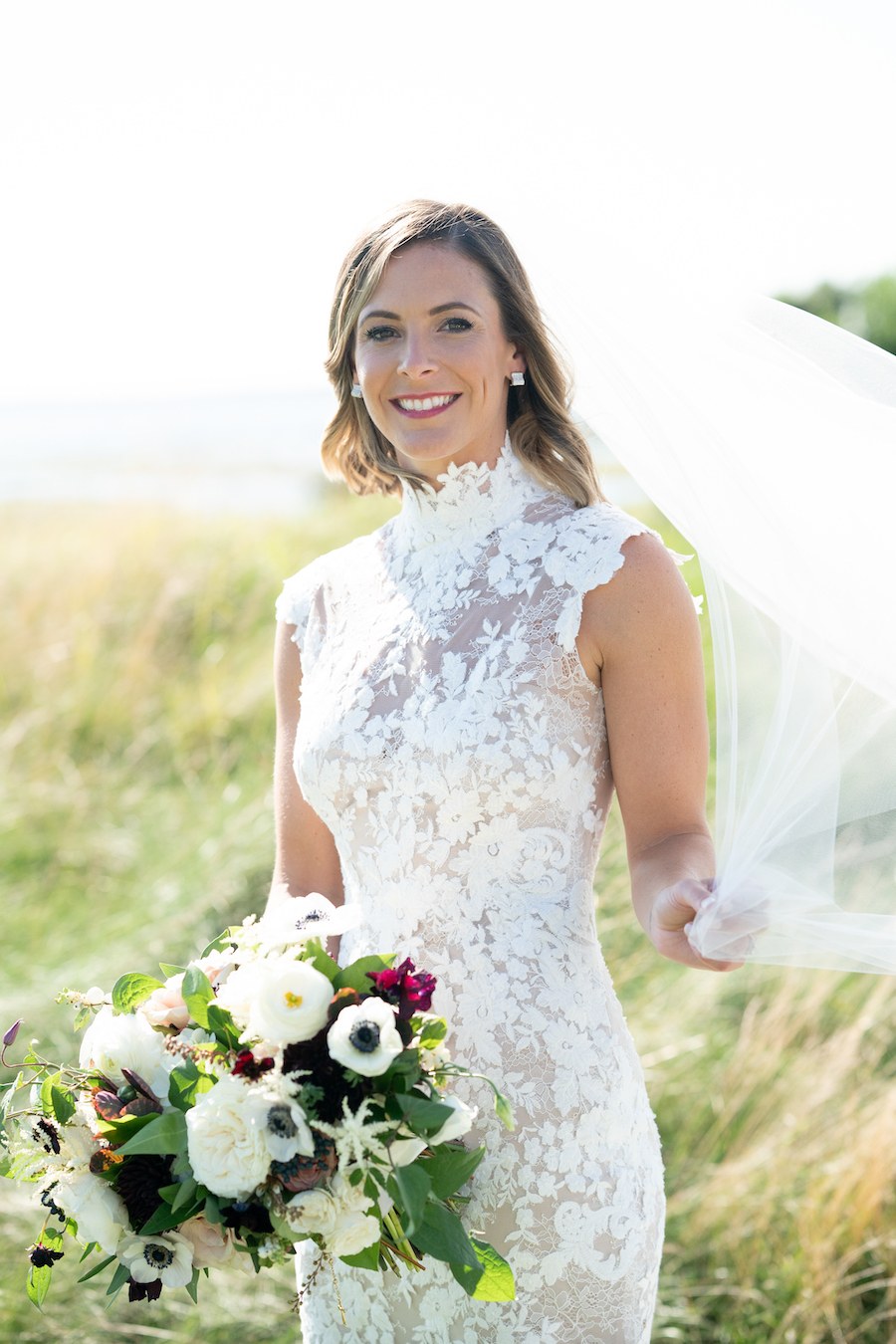 “I really wanted something romantic and a bit edgier with some contrast and darker tones,” Taylor says of her bouquet, which featured ivory garden roses, white anemones, burgundy ranunculus, chocolate cosmos, and other blooms. 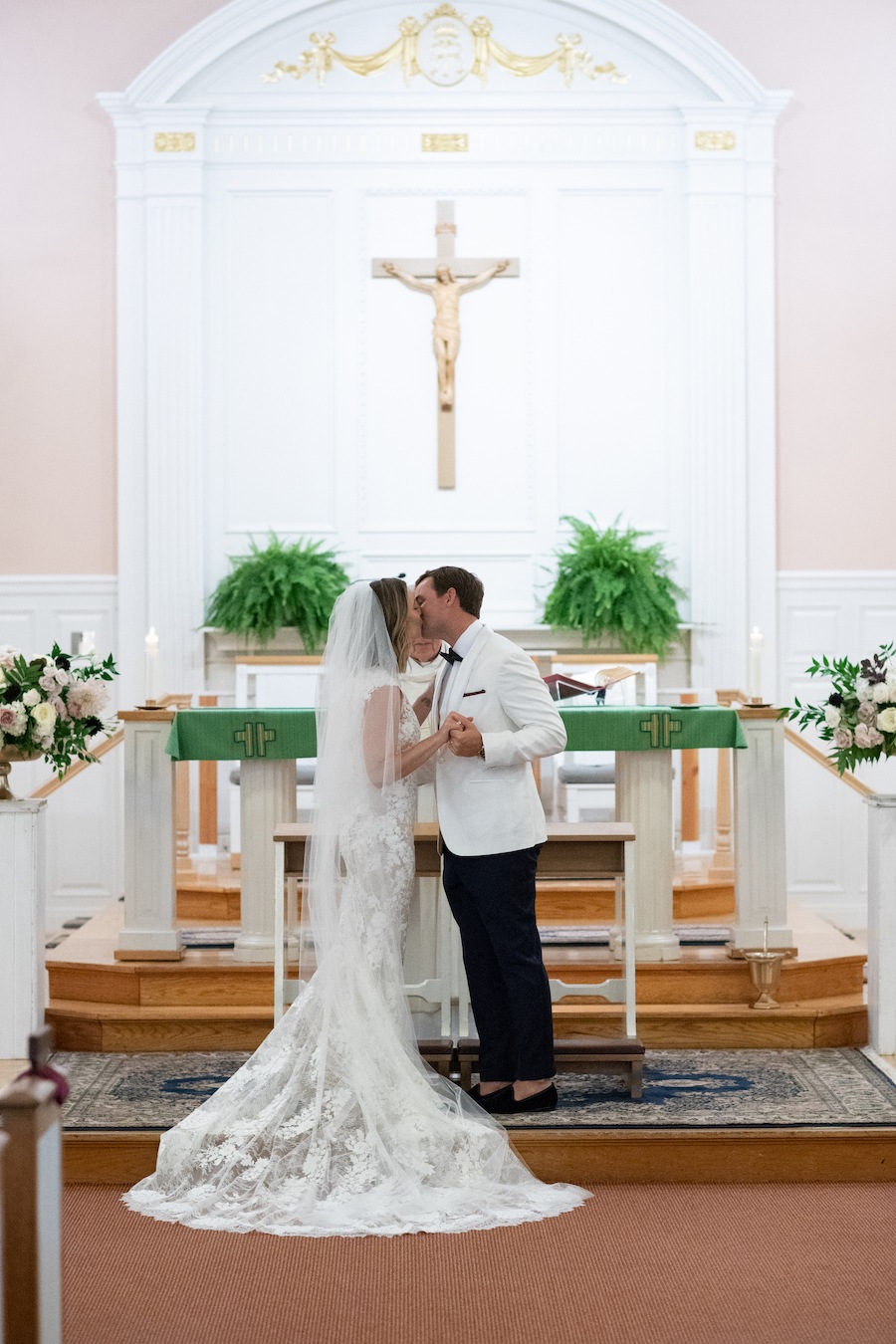 The couple’s ceremony took place at Our Lady of Victory church in Centerville, where Drew’s parents and aunt and uncle were married, and where Taylor was baptized. “[It was] very special place to us to have the full mass and experience the same thing my parents did before,” Drew says. 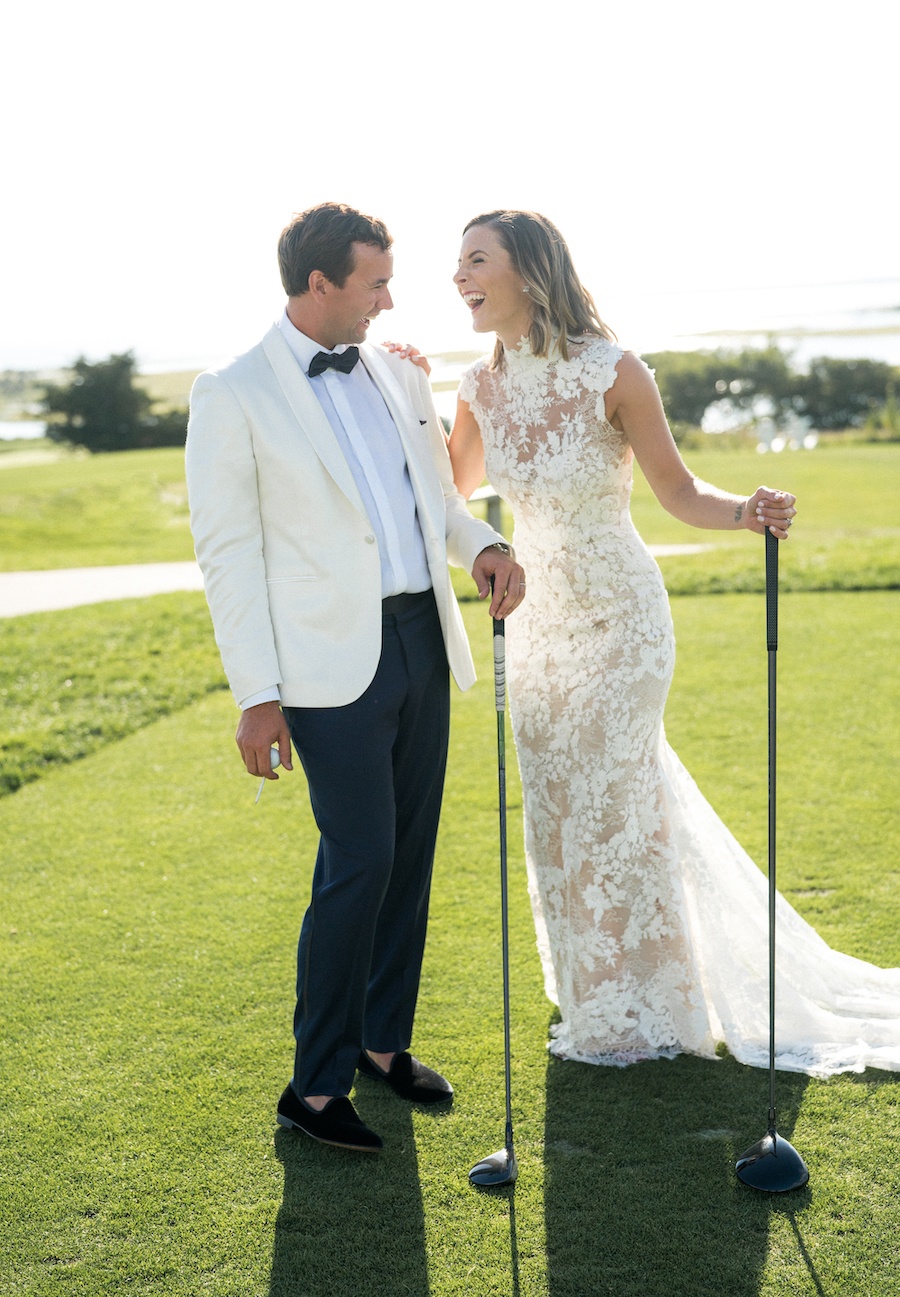 Taylor and Drew “wanted to have some fun” with their wedding photos, the bride says. So they headed to Hyannisport Club’s Sunset Hill to capture some images of the two taking swings on the golf course. 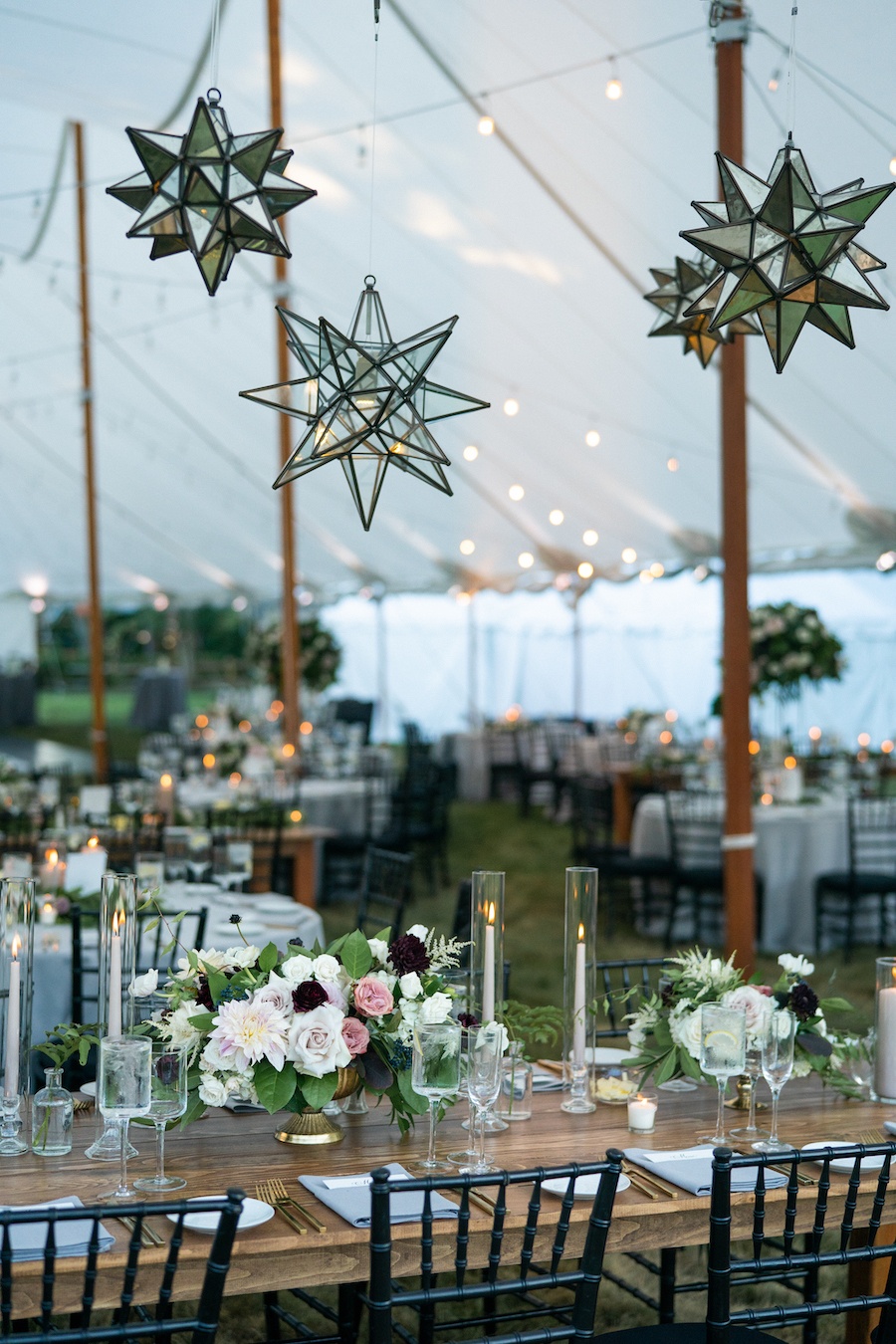 Although their families live on the Cape, the couple wanted to “steer clear from the nautical theme” at their reception, Taylor says, and create a look that was elegant with a dose of drama. “We wanted something that reflected our personalities and wanted to do something outside-the-box,” the bride explains. 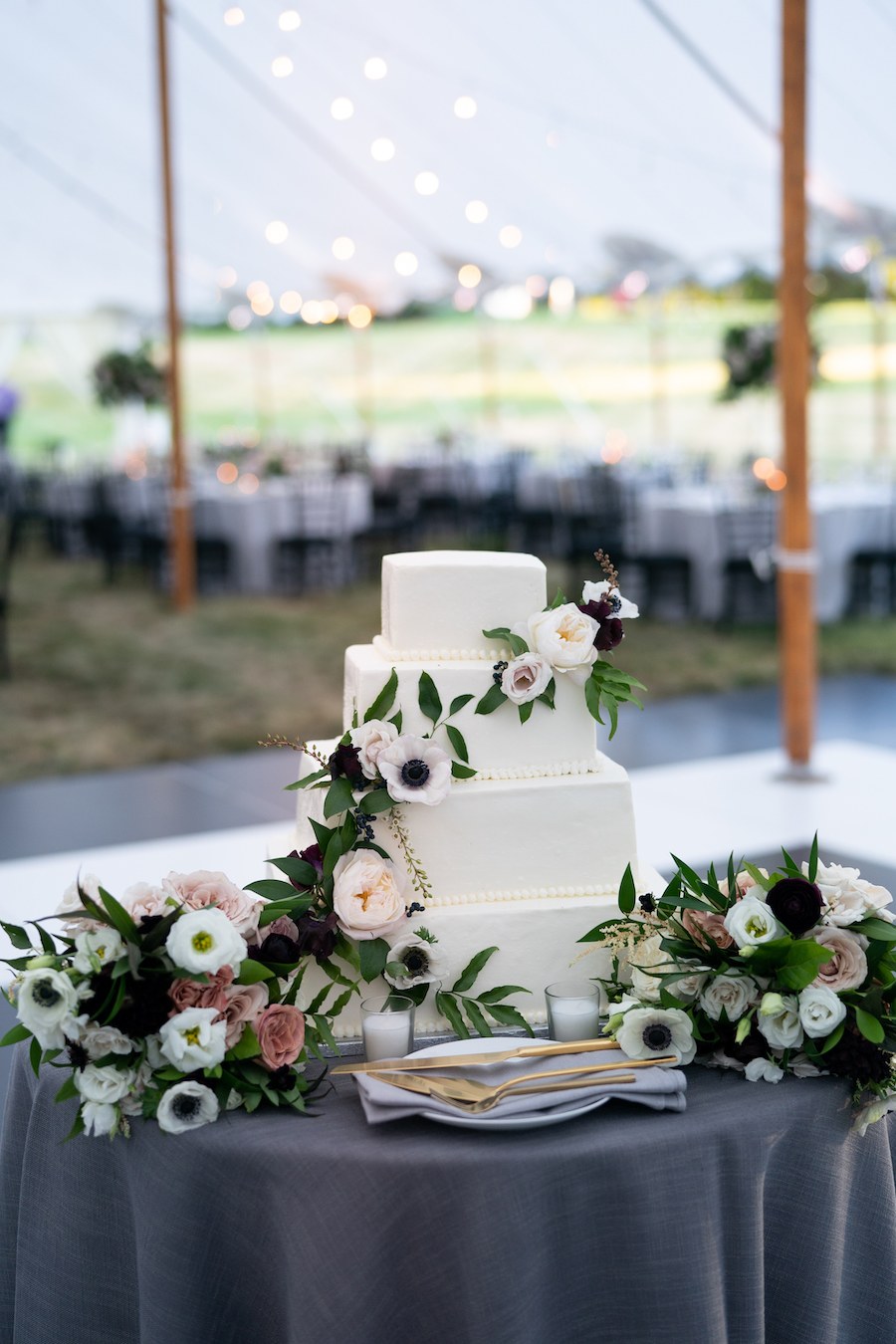 The bride and groom’s wedding cake featured two flavors: lemon with a raspberry filling, a favorite of the groom, and chocolate with a toffee filling, which the bride’s late grandmother used to make for her as a child. “I definitely wanted to pull some elements of my grandmother into the day,” Taylor says. 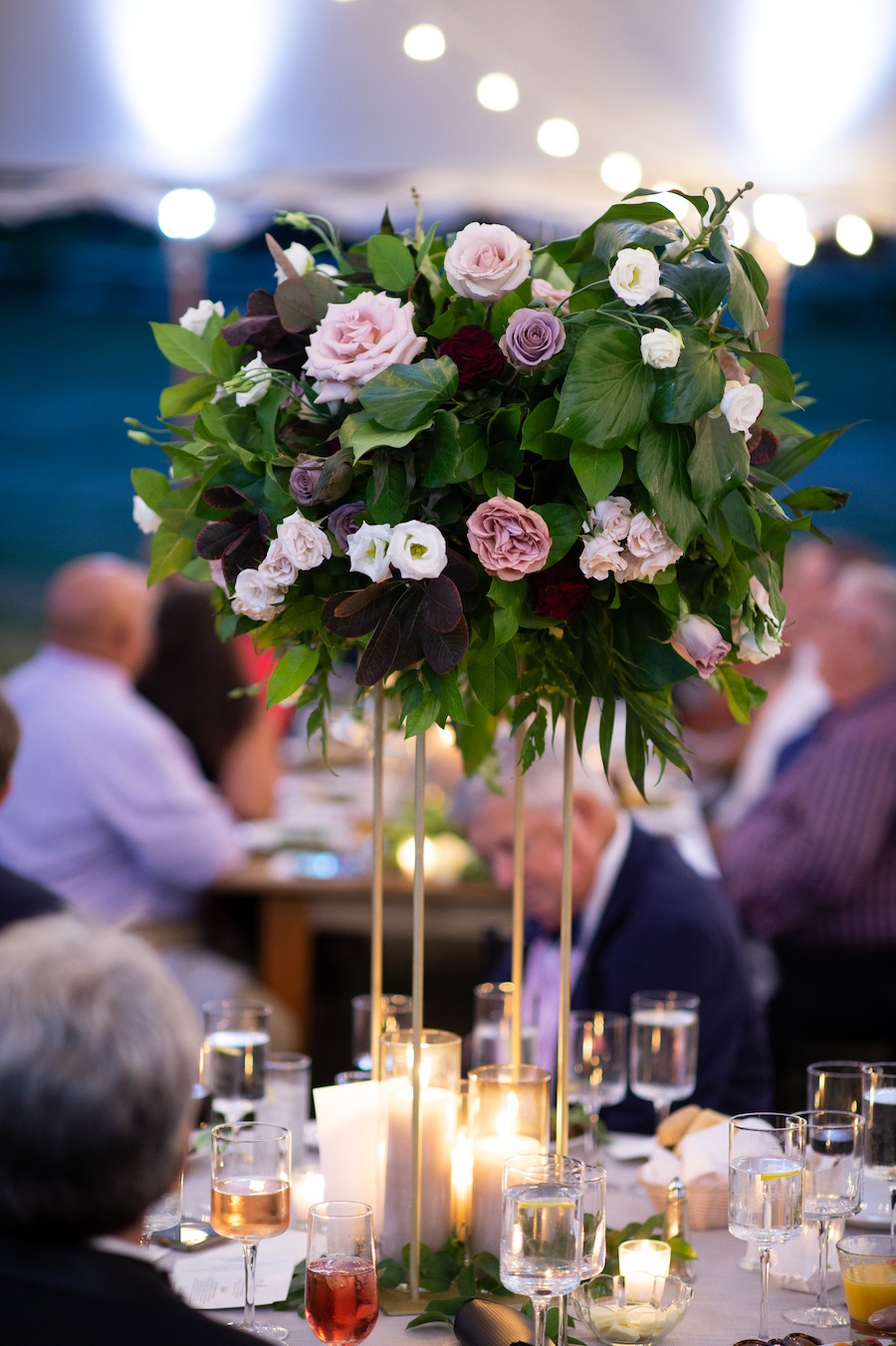 The centerpieces on the round tables at the reception featured four tall golden posts topped with arrangements of colorful blooms, smilax, lemon leaf, ferns, and other greenery. 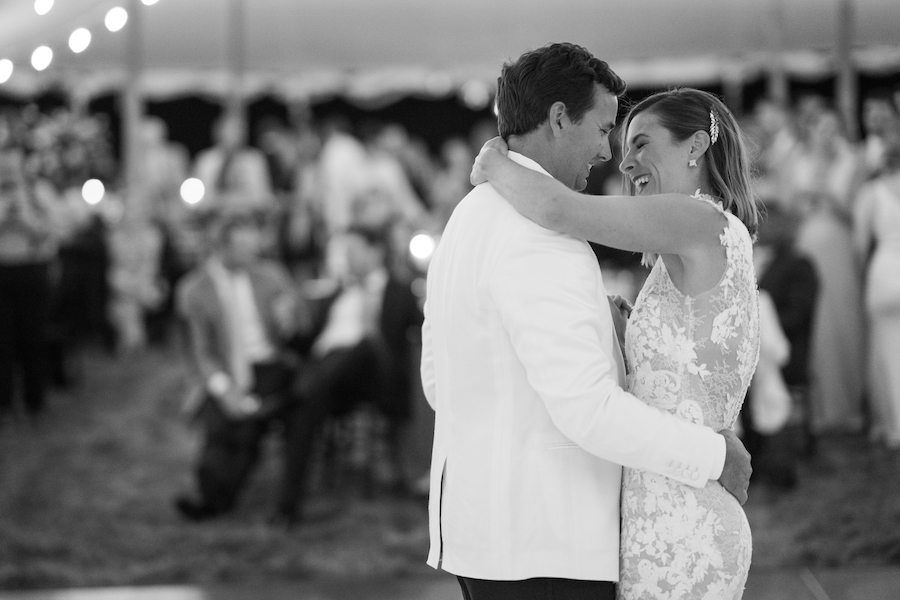 “Our first dance was so lovely and so memorable,” Taylor says. “It’s kind of crazy because we had 200 people there and it felt like there were zero people in the room.” As for their song? The country music fans chose “You Make It Easy” by Jason Aldean.