The bride lost the groom's phone number after he asked her out, but things still worked out for the lovebirds. 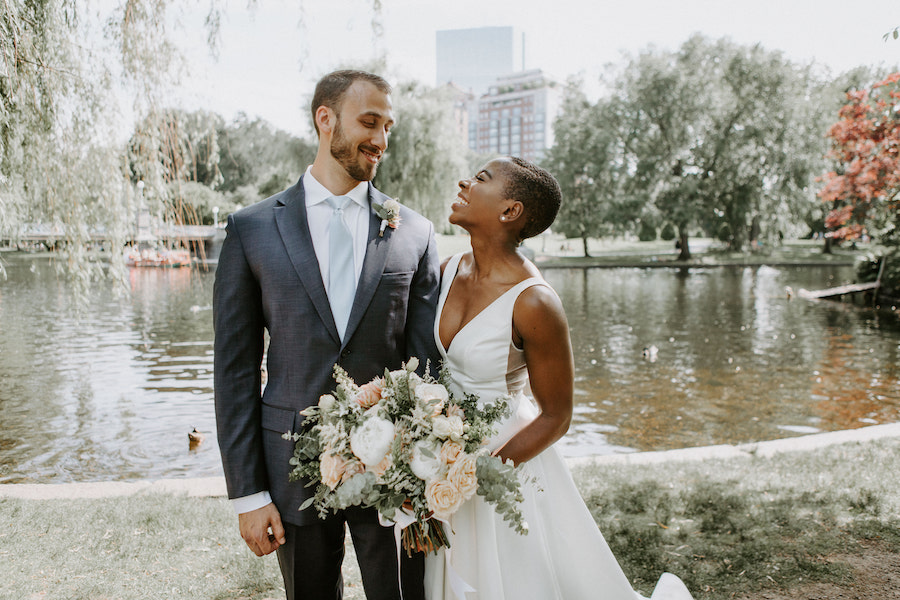 The gym might not be the first place many people think of when it comes to finding a soulmate, but for Ayana Robertson and Eli Andler that’s where it all happened. “I kind of noticed Ayana noticing me working out at Gym It in Brighton,” Eli says. “So I went against what I usually do, which is leave people alone when they’re working out, and eventually introduced myself.” He gave her his phone number, and then didn’t hear from her. So about a month later, Eli went up to her at the gym to ask about it. As it turns out, Ayana had lost his number. “I was really embarrassed,” she recalls. “We’d just see each other at the gym and I’d smile at him but I didn’t have the guts to tell him I did that. Luckily he came back and asked.” This time she gave Eli her number instead, and they had their first date at a local Thai restaurant not long after.

Over the years they eventually moved in together in Brighton, traveled, and got a cat named Shadow. Ayana never put any pressure on Eli to propose, he says, but by the fall of 2018 Eli knew it was time. Eli had always told Ayana that he wouldn’t bring an engagement ring to another country to pop the question because he’d be too stressed about losing it. However, he ended up doing just that on a trip to Rome. “I had to hide it really well,” he says. After they’d spent a day sightseeing, Eli told Ayana that he wanted to take her to an area he’d heard about with an amazing view of the city. They got there just as the sun began to set and the city lights flickered on, and Eli got down on one knee. “He found a nice little bench away from the crowd and kneeled down and told me how much he loved me. It was very sweet,” Ayana recalls. Afterward, they headed to a restaurant to dine and celebrate with a bottle of champagne.

When the two started planning their nuptials, they wanted their celebration to be economical, inviting only their closest friends and family, and food-centric. Since they come from different religious backgrounds, they decided to tie the knot at Boston City Hall—a “neutral” place, Ayana explains—and followed the ceremony with a party at Branch Line restaurant in Watertown, where they decorated the modern, sunlit event space with simple, natural-looking florals.”It was so awesome to be with our friends and family and celebrate with them around good food and wine,” Ayana adds. 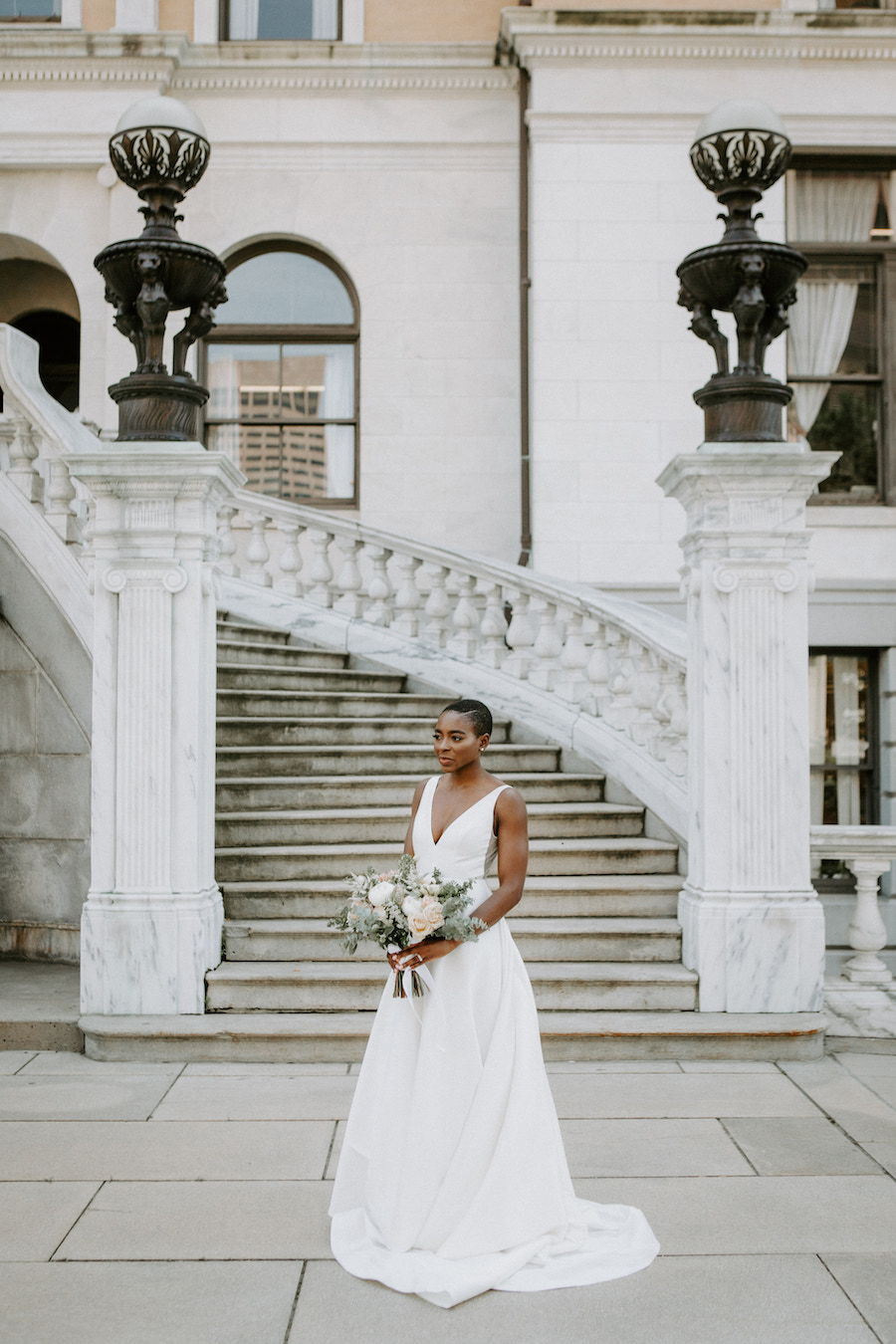 “Even though it was city hall-based and a much more casual wedding, I wanted to look at my pictures years later and [see myself in] a formal wedding gown,” Ayana says of her wedding-day look. Although she originally thought she’d wear a form-fitting strapless gown, she fell in love with this  frock from BHLDN. 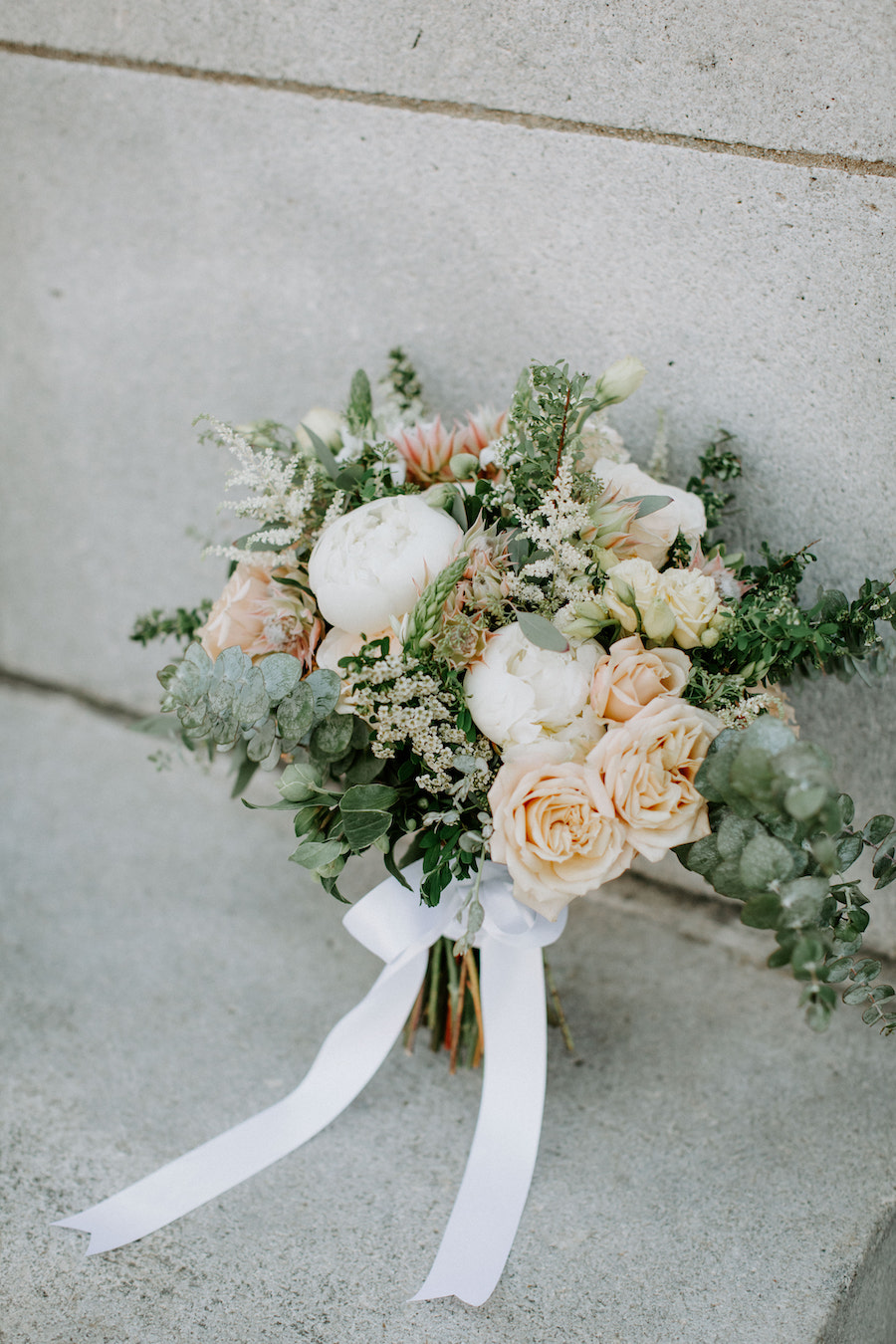 Ayana wanted her bouquet—which featured tulips, roses, helleborus, and protea—to have a colorful look fit for a summertime wedding. “It had so much character to it and a nice mix of flowers, which I loved. It really brought a brightness,” she says. 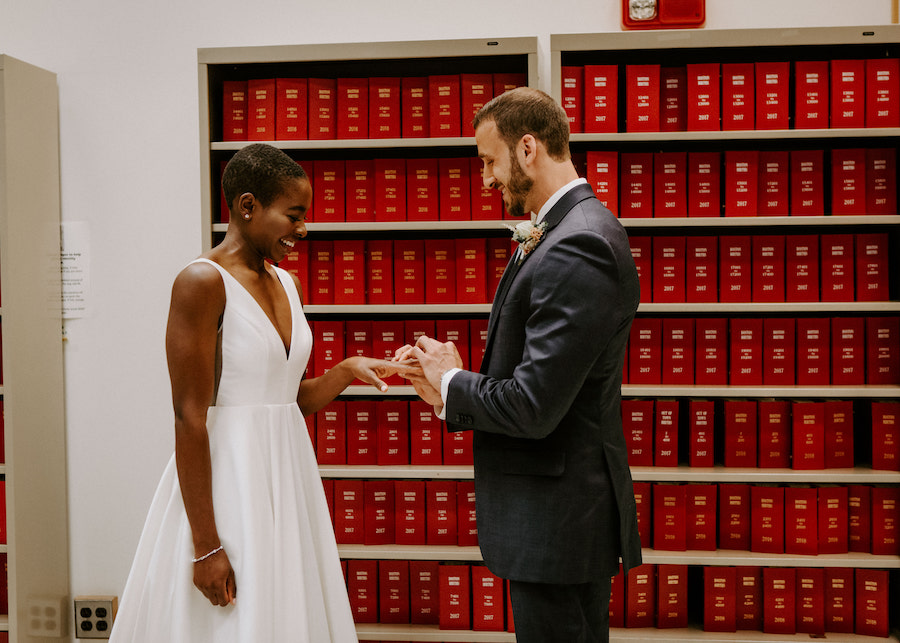 Since the bride is Christian and the groom is Jewish, they opted for a secular ceremony
at Boston City Hall, which only immediate family were invited to attend. 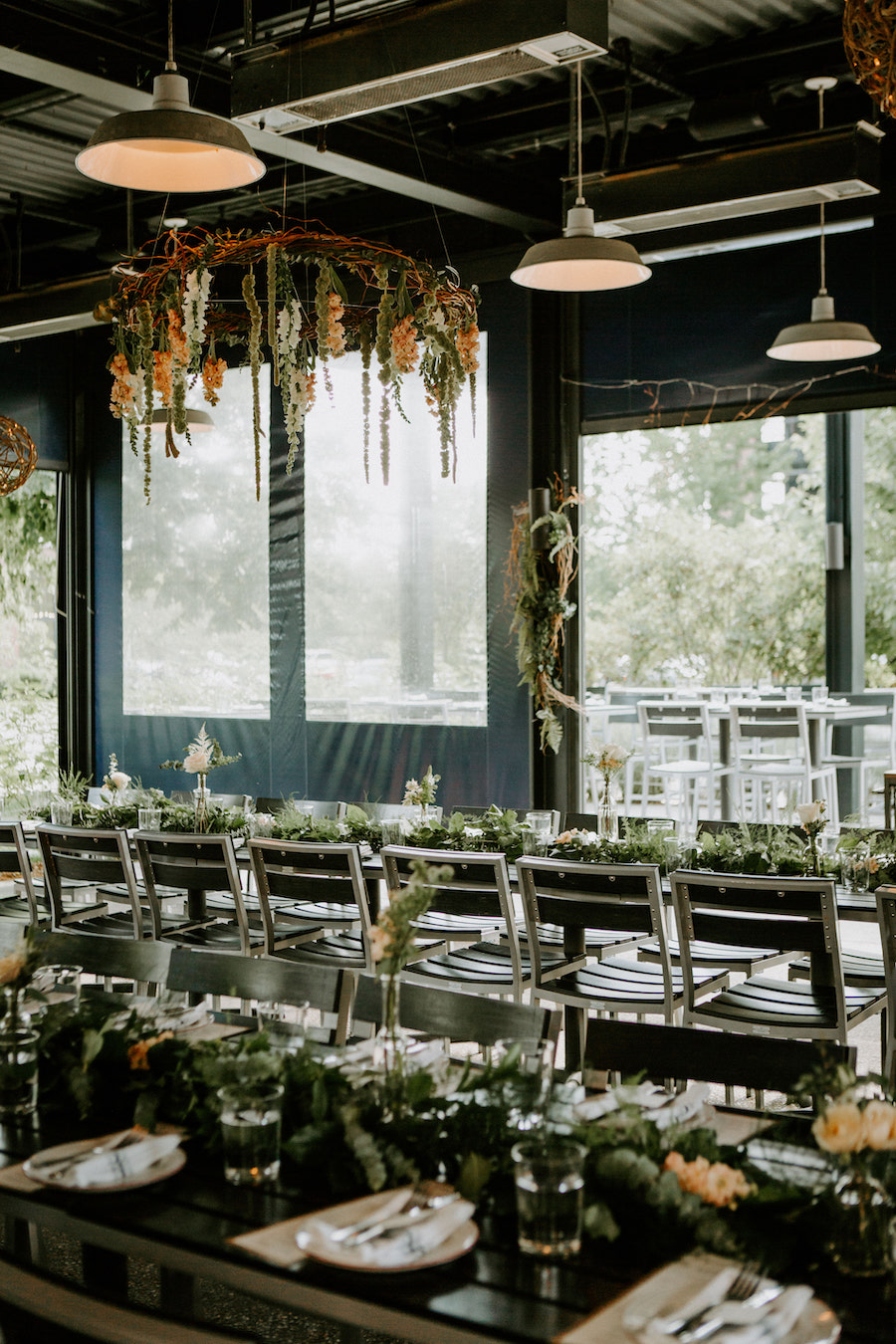 The couple decorated the reception space at Branch Line with lush flora. “It was very green, which I absolutely loved, and reminded me of being outdoors,” Ayana says. The couple also hung a chandelier made of curly willow, green amaranth, and peach and white snap dragons. “It was not only unique but also made space look more beautiful,” the bride adds. 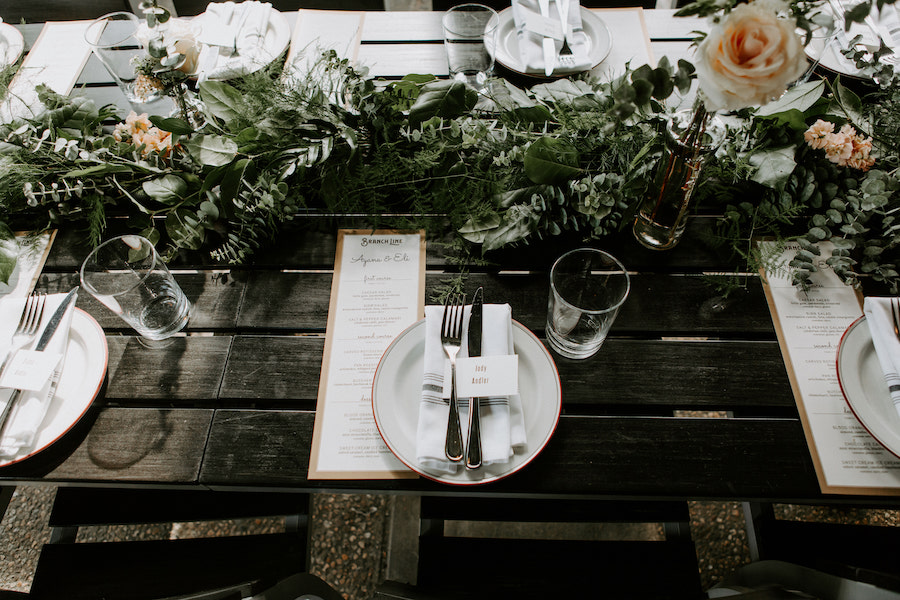 Ayana and Eli wanted the place settings for their family-style dinner to be “simple and casual,” the bride says. As for the menu, the selection of passed dishes was a hit. “Everyone loved getting to be able to try everything, and it ended up being one of the highlights of the wedding,” Ayana adds. 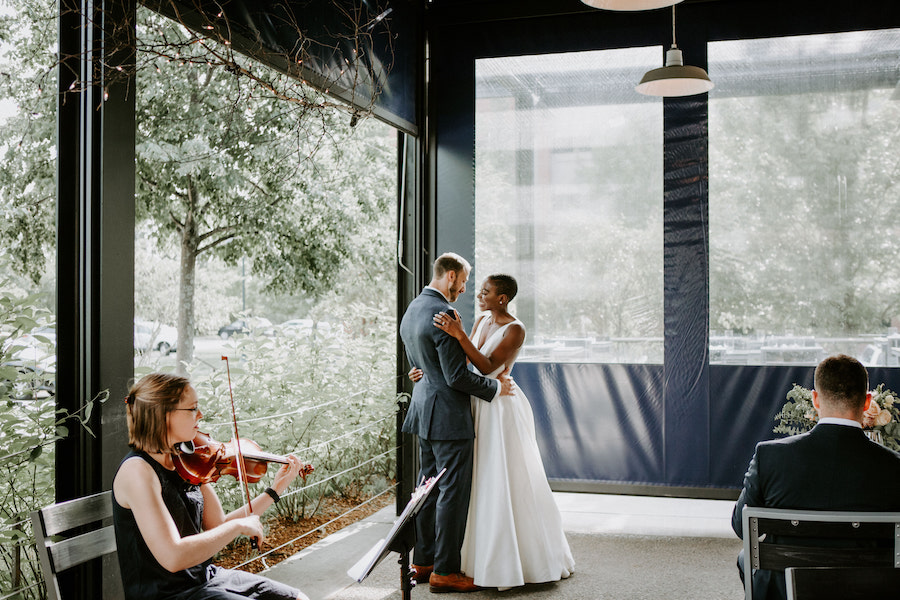 The bride and groom had their first dance to “You Are the Reason” by Calum Scott, played by violinist Amanda Roth. “I liked the song because it’s really about trying hard for the person you’re with,” Ayana explains. “I think that’s really important for the length of any relationship—that each person is giving their best.”