How do you know when to build a real storage space for your wine? If you’ve got bottles stashed on top of the fridge, piling up in the garage, or even, heaven forbid, stowed in a stuffy attic, it’s way past time.

Though it may seem intimidating, building a cellar for your wine doesn’t require an MIT degree. In fact, local experts agree that with the proper plans, a proficient do-it-yourselfer can create one in a few weeks’ time.

To make sure bottles don’t go bad, most wine cellars carefully monitor temperature, humidity, and light. Ideal storage conditions are between 50 and 59 degrees Farenheit with 60 to 80 percent humidity. Too cool a space can encourage deposits; higher temperatures contribute to premature aging. Low humidity causes corks to dry out, which can allow air to sneak inside and oxidize your prized bottles, while high humidity can breed mold. All this may sound awfully technical, but just remember that the only real necessities are access to electricity and, for bona fide oenophiles, room for expansion.

For more guidance in designing a cellar, turn to a local expert like Apex Wine Cellars in Marlborough. Prices vary for a professionally built cellar, but expect to spend a few grand to adequately house your merlots and Sancerres. “We’ve done cellars that hold 120 bottles of wine [for about $5,000],” says Apex’s Peter Oikle, “and ones that hold 3,500 [for about $20,000].” To see the range of possibilities that custom cellars offer, we took a peek inside four stunning local spaces. 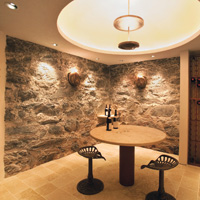 Project #1: The Boys’ Club
When Jim Nuzzo’s wife wanted to build him a wine cellar for his 50th birthday, she asked the contractor who had just finished their Newton home’s million-dollar renovation: Andy Bolalek of Canton-based Bolalek Construction. His one stipulation: “Promise you won’t come downstairs until it’s all finished.” The Nuzzos agreed.

Bolalek capitalized on the 110-year-old Victorian’s stone foundation and worked within the existing space to create a 10-by-12-foot wine cellar with a domed ceiling. A small Jerusalem stone table and two chairs made from ’50s tractor seats—Jim Nuzzo found them on eBay for $80 each—make for a unique place to sample a bottle. The designer also installed a handmade chandelier and wall sconces. One door leads to the main house, the other to what Nuzzo calls the Bat Cave, a 6-by-10-foot cigar room furnished with a TV and two rocking chairs.

“When I opened the door, my jaw hit the floor,” says Jim Nuzzo, a venture capitalist and WBUR commentator who’s been collecting wine for decades. Among his favorite treasures are three bottles of port: one from 1955, his birth year; one from his 1977 college graduation; and a 1988 port he got on his wedding day. He’s also storing three other special ports—from each of his three children’s birth years—that he plans to uncork on their 21st birthdays.

Project #2: The Conversion
South Enders Ray Skiba, Jim Barnovitch, and Paul Whaley all shared a love of wine. They also shared a coal bin. The unusual 104-square-foot brick-lined tunnel was adjacent to their five-story townhome’s below-ground kitchen. “The curved brick tunnel is reminiscent of the wine caves of Italy,” says designer Peter Oikle. And the coal bin’s inherent low humidity and temperature made it the ideal spot for a cellar.

It did, however, need a few modern-day updates. “The bin wasn’t waterproof, and during heavy rains, water would leak in,” says co-owner Whaley, a local real estate agent. So before construction even began, he hired Weymouth’s Holland Construction to renovate the tunnel.

Another challenge was getting the rack lengths right, since the circular ceiling had an irregular radius. Oikle solved the problem by sizing the African mahogany shelves on-site, during the actual installation (typically, racks are precut). He chose the wood for its natural rich grain and color—stained and varnished racking often releases fumes that penetrate wine corks.

Today, with low-voltage lighting (to minimize unwanted heat), clean and restored brick walls, and Italian limestone floor tiles, the original coal bin is all dressed up. 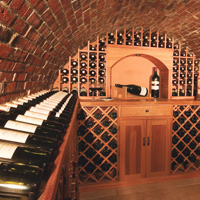 Project #3: Suite Dream
Inspired by the great cellars of Burgundy and Bordeaux, this serious cellar in Dover comprises two rooms connected by a limestone foyer. One is a semicircular space filled with custom-made mahogany racks and 1,500 bottles of wine. In the other are even more racks and a wooden plank-top table piled high with 500 cases of wine.

Westborough-based interior designer Ned Jalbert erected a wrought-iron gate at the entrance to the first room. He also installed a hanging metal neo-Gothic light fixture in the foyer. “The way it casts light around…it’s kaleidoscopic,” he says.

The owners also worked with a ventilation specialist to ensure the temperature and humidity are always optimal, and that a backup system is in place.

Project #4: the Italian Job
A trip to Italy was all it took. Shortly after returning stateside, a local homeowner hired Charles River Wine Cellars to help him turn a 14-by-16-foot section of his Kingston colonial’s basement into a Tuscan-inspired retreat.

Rather than use the typical limestone for the walls, designer Ed Loughran crafted columns out of the less expensive—but nearly identical-looking—European castle stone. Loughran also hired a local artist to paint sweeping Tuscan landscapes onto the room’s tumbled marble tiles, which are further enhanced by soft accent lighting.

The owner chose mahogany racks for their durability and resistance to moisture—the upscale shelving holds 1,600 bottles and cost $50,000 to create. But that doesn’t strike Loughran as too extravagant. “You really owe it to the collection to house it properly,” he says with a smile. “We call it liquid-asset protection.”