We’ve all heard the news flash: Thanks to posh resorts and a souped-up international airport, Cancún is no longer just for spring breakers. The real news, though, lies 35 miles south, around the Riviera Maya town of Playa del Carmen. The area has all the natural beauty of Cancún—minus the college kids and strip-mall hotels. It’s rich in history, culture, and, most importantly, secluded beaches. Those looking to loll around in the sun can do so while sipping margaritas. Adventure-seekers can snorkel in underground freshwater cenotes (limestone caves) or climb the ruins of Chichen Itza, Tulum, or Cobá. More motivated honeymooners can book eco-tours to zipline through the jungle. The late winter months bring humidity-free warm temperatures, so while your wedding guests are deciding how to shovel out their cars, your burning dilemma will be: Lie on the beach or sit by the pool?

Sweet suites: There’s exclusive, and then there’s hidden-entrance exclusive. Guests get what they pay (a lot) for at the 64-room Maroma Resort and Spa, where every conceivable luxury—think plunge pool, fitness alcove, and spa area—comes inside each oceanfront Sian Nah suite. At night, hundreds of flickering candles line landscaped walkways that weave throughout the property’s three pools, private beach, and restaurants (866-454-9351, maromahotel.com).

Brand new and spa-centric, the 128-room Mandarin Oriental Riviera Maya is centered around a turquoise cenote. Nesting turtles burrow near its private white-sand beach, while honeymooners get rubbed down in the spa’s VIP couples’ suite or stretch their limbs in private yoga classes. Those who spring for the Villa Presidencial get their own butler and chef (866-526-6567, mandarinoriental.com).

One memorable meal: Rustic taco stands and “Mexican” eateries line Playa del Carmen’s crowded Quinta Avenida, but much of the authentic Mayan food—cactus, poblano mole—comes from the area hotels, surprisingly. At Maroma, special occasions can be celebrated right on the beach, where lovers sit at private tables-for-two attended to by personal waiters (866-454-9351, maromahotel.com).

Compatibility Test
Best for: Hotel snobs, beach bums, spa fanatics, water lovers, romantics, naturalists, millionaires.
Not for: Partiers, gourmands, those looking to mingle or make friends, anyone on any sort of budget.

To find out about honeymoons in California, go on to the next page… 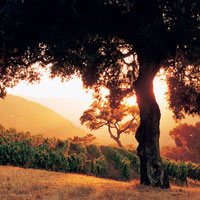 Sure, you could spend your entire honeymoon tucked away in a bungalow built for two. Restless types, however, should consider something a bit more active, like meandering down California’s Pacific coast. The unforgettable stretch of road promises a spectacular beach around the bend of every corner and a plethora of places to pull off for diversions. Ride the roller coaster in Santa Cruz, browse galleries in ritzy Carmel-by-the-sea, go tidepooling in Big Sur, rent cruiser bikes on Santa Barbara’s palm-lined waterfront—and never see the same sunset twice. Hitting the coast in spring means you’ll get green hills, tons of wildflowers, and fewer crowds. (The tradeoff is that you’ll need a wetsuit if you want to hit the waves.) And take out a few extra days on the rental car, because when you reach LA, you might just want to turn right around and drive it all again.

Sweet suites: Provence meets California at the Bernardus Lodge, which lies 15 minutes outside Carmel-by-the-sea. From here, wine-tasting in the Carmel Highlands is a must (honeymooners get VIP tasting passes at Bernardus Winery) before returning to a romantic fireplace, a tub for two, and homemade lavender bath salts (888-648-9463, www.bernardus.com).

Hollywood types and honeymooners looking for an ultra-private retreat hole up at the posh Bacara Resort & Spa, about 20 minutes north of Santa Barbara. Here, along the “American Riviera,” you’ll find perfectly aligned palm trees and dramatic infinity pools on the way down the hillside to a 2-mile secluded beach (877-422-4245, bacararesort.com).

One memorable meal: Every seat is a window seat at the swank Post Ranch Inn’s romantic Sierra Mar, an upscale eatery built on a cliff 1,200 feet above the Big Sur coast. Splurge on a four-course prix-fixe dinner of local seafood and greens from on-site organic gardens, and, if you’re lucky, the first of the super-sweet woodland strawberries (831-667-2800, postranchinn.com).

Compatibility test
Best for: flip-flop wearing, beach-obsessed bohemians who crave salt air, plenty of variety, and the chance to dress up for a nice night out.
Not for: Planners chained to their guidebooks, anyone predisposed to car sickness or road rage.

To find out about honeymoons in Lisbon, go on to the next page… 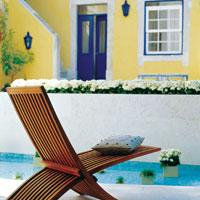 Some ill-informed globetrotters have dismissed Portugal as little more than a European appendage, whose principal claim to fame is that the country had been home to a few famous explorers. But Lisbon’s dark ages ended centuries ago, and savvy travelers have discovered a world-class capital full of contemporary delights and ancient history. A visit to the coastal city prompts a welcome sensory assault in the form of the sultry tones of fado, Portuguese folk music, and the spicy taste of bacalhau, a traditional salt cod dish. The nearby beaches of Estoril are far less crowded than Spain’s, and romantics can wander for hours along Lisbon’s narrow medieval streets. 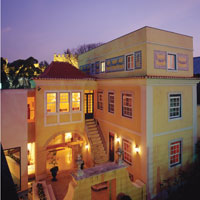 Sweet suites: Behind a simple blue door off a quiet side street, Solar do Castelo is an urban oasis. Circled by the walls of Castelo São Jorge and housed in an 18th-century mansion, the 14-room hotel spares no modern expense. Don’t miss a nightcap in the low-lit inner stone courtyard (351-21-880-6050, solardocastelo.com).

Like much in Lisbon, the Bairro Alto Hotel, a 1770 Praça Luís de Camões spot, is a blend of past and present. Today, it sits at the nexus of two emerging districts, Bairro Alto and Chiado, and within steps of the city’s best bars, restaurants, and fado houses. Inside the hotel, the sites are equally enticing: sweeping views from the 6th-floor terrace and guest DJs in the café bar (351-21-340-8288, ba
irroaltohotel.com).

One memorable meal: High above the Tagus River, Restaurant Eleven—named for its near-dozen owners—serves sophisticated food in an attitude-free setting. Couples looking for adventure can request the kitchen table (literally situated amid the cooks); those seeking privacy can nibble curry-crusted lamb with date couscous on the outdoor terrace (351-21-386-2211, restauranteleven.com).

To find out about honeymoons in Iceland, go on to the next page…

Adventuresome couples should make way for Iceland’s magical landscape, which is equal parts Fortress of Solitude and Dante’s Inferno. The capital city, Reykjavik, exudes a palpable energy—evidenced by the all-night scene at Björk’s favorite club, Kaffibarinn, and dance hotspot Rex, as well as sophisticated culture (check out the clothing boutiques and galleries along Bankastræti Street). Outside the city, mammoth geysers and glaciers line the breathtaking Golden Circle region to the south. Nearby are the healing mineral waters of the Blue Lagoon, a superheated, cyan-colored spa complex in the middle of a supernatural-looking lava field. 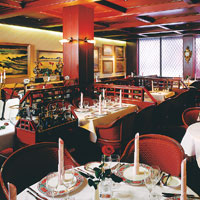 Sweet suites: In the center of Reykjavik, the newly renovated Hotel Borg gives Art Deco a Nordic spin. The lobby, with its streamlined black-and-white leather banquettes, is a throwback to 1930s New York. But the hotel’s two-story Tower Suite is all Icelandic: Its 360-degree views of the city and surrounding glaciers are an awe-inspiring sight (354-551-1440, hotelborg.is).

Art-loving couples routinely check in at the boutique Hotel Holt to ogle the nearly 300-piece Icelandic collection. The property has 12 suites and guests have access to the on-site massage room and the city’s best fitness center. Romantics can walk out the front door to stroll around Tjornin, Reykjavik’s picturesque central lake (354-552-5700, olt.is).

One memorable meal: Sjávarkjallarinn’s cellar dining room dates from Viking times, but its seafood-heavy menu is awash with creative modern cuisine. Dishes like lobster with pomegranate and truffles, and tuna with black currant and cardamom, delight the young, hip diners (354-511-1212, sjavarkjallarinn.is).

To find out about honeymoons in Quebec City, go on to the next page… 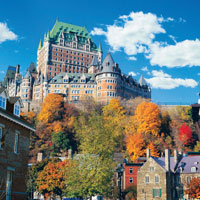 Priced out of Paris but yearning for an international escape? Look to Quebec, North America’s own City of Love, minus the arrondissements and snobbery. The mini metropolis’s narrow streets, verdant parks, and towering castle seem lifted from a Hans Christian Andersen story. A streetlamp-lined boardwalk above the St. Lawrence River connects the hilltop “old city” with the Central Park–like Plains of Abraham; outside Quebec’s ancient fortress walls are modern neighborhoods full of shops, eateries, and friendly residents. The city’s fun-loving temperament will reach a crescendo in 2008, when locals celebrate Quebec’s 400th anniversary with festivals galore. Couples looking for city respites can decamp for the Ile d’Orleans, a nearby island of rolling vineyards, strawberry farms, and country inns; or visit Montmorency Park, home to a waterfall nearly 100 feet taller than Niagara. New non-stop flights to Quebec are an easy option in the fall, when warm days and crisp nights up the romantic ante. 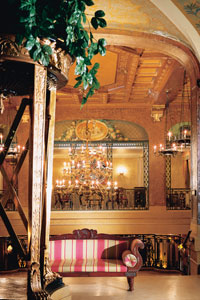 Sweet suites: Le Chateau Frontenac, “the chateau” to locals, dominates the skyline from its cliff-top perch. The 618-room hotel dates back to 1883 and offers its luxury suite guests panoramic views of the St. Lawrence River, the Plains of Abraham, and the old city. Honeymooners can soak up Quebec’s centuries-old history and fairy tale-like ambiance in the classically decorated rooms and candlelit restaurant (418-692-3861, fairmont.com/frontenac).
The up-and-coming old port district is peppered with galleries, bistros, and boutique hotels. The Auberge Saint-Antoine, with its contemporary décor, in-room Swedish massages, and fabled Panache restaurant, is the best of the latter. The Relais & Chateaux property’s suites are a study in streamlined opulence; be sure to request rooms with fireplaces and terraces (418-692-2211, saint-antoine.com).

Compatibility test
Best for: Romantics, explorers, Francophiles, the budget-conscious, history buffs, gastronomes
Not for: Spa fanatics, sun worshipers, anyone put off by preciousness.

To find out about honeymoons in Turks and Caicos, go on to the next page… 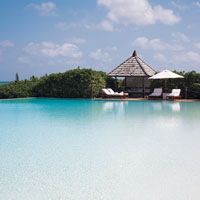 Planning a wedding between Thanksgiving and New Year’s has its upsides: You save a bundle on ceremony decorations (assuming you like poinsettias), guests are in a generous mood, and honeymoon protocol requires that you spend at least two weeks on the beach during the Northeast’s depressing descent into winter. For a convenient alternative to the standard Caribbean destinations, try the islands of Turks and Caicos, just east of Cuba. More than 200 miles of pristine, white-sand beaches edge the isles, which boast some of the world’s best scuba diving and an annual migration of more than 2,000 humpback whales. Mild winter temperatures that keep bugs at bay and 80+ degree water also make this the islands’ busiest season. Still, thanks to an average of 320 days of sunshine each year (and, of course, your newlywed glow), you&
rsquo;ll be too busy enjoying yourself to notice anyone else.

At Providenciales’s newly-expanded Grace Bay Club, which sits on 11 acres of property with more than 1,100 feet of beachfront access, 59 luxurious suites cater to honeymooners with 250-thread count Egyptian cotton sheets and candlelight turn-down service. Active couples can take advantage of the club’s spot on Turks and Caicos’s main island with chartered sails, reef diving, and the world’s only Conch Farm, which raises, trains, and serves Caribbean Queen conchs (800-946-5757, gracebayclub.com). 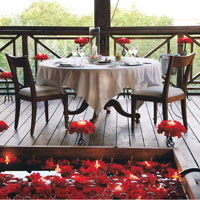 One memorable meal: At the year-old Somerset on Grace Bay, an aquatic paradise on the island of Providenciales, house restaurant O’Soleil serves up seafood-heavy fare like thin-sliced, tequila-cured salmon gravlax and lobster-and-scallop fettucini alongside more traditional chicken curry, mushroom risotto, and Australian rack of lamb in pinot noir sauce. Move outdoors for fruit sushi or creative tea-infused brûlée under the stars (649-946-5900; thesomerset.com).