JUST OVER THE BOURNE TOWN line, I witnessed my usually spry husband take a tumble on the Claire Saltonstall Bikeway. I dropped my bike and ran to him, only to be rebuffed by a “Don’t touch me” growl. At 51, Ellement (first name John, but never called by it) wasn’t exactly an avid biker. A decade younger, I’d pedaled a 100-mile “century ride” and loved to leave him in the dust of “On-Your-Left” Land. This time, his only injury was a bruised ego (which might have healed faster had I stopped giggling). 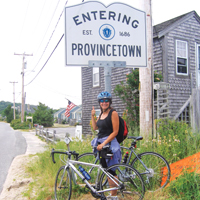 But that’s how we are: We compete. We met as rival Boston crime reporters during the infamous May 2003 “Cat Lady” trial, and our professional battles have helped us develop skin thick enough to endure defeat—and worse, gloating—at the other’s hands. Over the years, though, I had come to realize that we didn’t lean on each other as much as other couples did. Typically, Ellement refuses to let me care for him when he’s sick, and I won’t let him help me with an errand, even if I’m over-loaded. So I proposed a simple bike trip for our annual vacation, thinking it just might encourage interdependence. (Make no mistake, though: My competitive side still intended to leave him sweating to catch up.)

The plan was to bike the 80 miles from Plymouth to Provincetown without any itinerary or hotel reservations. On our first day in late July, we finished 17 miles of grueling Plymouth hills in four hours (I only poked a little fun when one of us walked a bike up the steepest incline). We were exhilarated coasting over the Sagamore Bridge, inches from trucks and cars roaring across four lanes 135 feet above the Cape Cod Canal. Later, we were humbled by the clerk at the Belfry Inne, a Sandwich church-turned-B&B, who said he routinely rode the length of the Cape in two hours (Belfry Inne, 8 Jarves St., Sandwich, 508-888-8550, belfryinn.com). 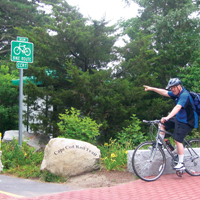 The next morning, our sore muscles reluctantly embraced a difficult 36-mile day of starts and stops along narrow main streets before merging onto the mostly flat Cape Cod Rail Trail. But we were out of sync. At one point, Ellement rode over his own leg rather than crash into me. An hour later, I ruefully walked my bike the remaining mile into Orleans Center, while he rode ahead and found us a room at the Cove Motel (The Cove Motel, 13 South Orleans Road, Rt. 28, Orleans, 508-255-1203, thecoveorleans.com). He thoughtfully booked a suite with a bathtub, thinking my sore muscles could use a soak, but the extra $100 charge forced me to turn it down.

The last day found us proudly snapping shots of each other under the “Entering Provincetown” sign, and soon thereafter at the Surfside Motel, where we cracked open our sliding glass doors to listen to the crashing waves during an afternoon nap (Surfside Hotel & Suites, 543 Commercial St., Provincetown, 508-487-1726, surfsideinn.cc). Triumphant, we were the only people who seemed to enjoy the 90-minute Boston Harbor ferry ride from the boat deck—in the spitting rain. By the time we got to Long Wharf, it was pouring. Ellement wanted to bike the seven miles home, but I couldn’t muster the strength. Dodging the rain, he hailed a taxi. 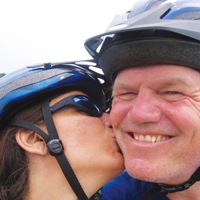 It was then that I realized I had accomplished my mission. It felt good to let him take charge as I waited under an awning and watched him slosh through puddles on my behalf. And I knew it was a success for him when, three days later, he had the courage to complain about the large bruise on his ankle. Turns out, we softened toward relying on each other in the nick of time: Within the week, we found out we were expecting our first child.