Boston Home Spring 2010: Made Her Way

When a stay-at-home mom and her husband bought a Newton fixer-upper, she got the chance to show off some serious design moxie. 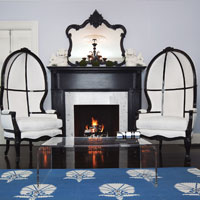 from Pittsburgh and Cape Town, South Africa, respectively, the couple met while getting their M.B.A.s at Harvard. They loved the city’s urban vibe and student population, but after years of house hunting, they couldn’t find a place to call home: Every one they looked at was either too big of a project, or too small for a growing family. Forced to expand their search to the western suburbs, they ended up looking at literally hundreds of properties while living in Cambridge rentals.

[sidebar]But on a winter morning in 2007, they found a house that was just right. Within seconds of walking through the doorway of the six-bedroom, 6,235-square-foot West Newton Colonial Revival, Sylvester, 37, fell in love. “It jus 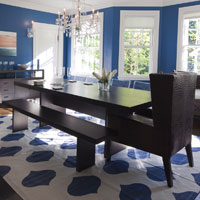 t oozed character,” she says. “I adored its high ceilings, gorgeous crown and base moldings, beautiful original floors, and intricate woodwork — and the front staircase was so grand it took my breath away.” The avowed city dwellers were sold on the ‘burbs and took the plunge.

The home’s quirky 19th-century layout particularly inspired Sylvester. “The house seemed full of mystery, as if you might uncover a secret passage or a historic document buried in the wall,” she says. It reminded her of her grandmother’s Pennsylvania home, where she’d spent childhood weekends “discovering” hidden chambers. She knew that her sons, Calvin, age four, and Beckett, two and a half, would play epic games of hide-and-seek amid the back staircase, walk-in closets, and interconnected rooms. In other words, the house was perfect for a creative mom and her feisty children. 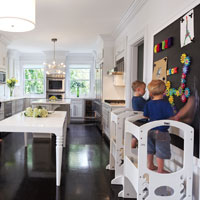 Because it hadn’t been updated in at least 30 years, the house needed new bathrooms, a new kitchen, landscaping, a laundry room, and a formal office space, plus a new heating and cooling system. A self-described “design junkie,” Sylvester wasn’t deterred by the scale of the project. For this mother of two young boys, renovating is the one thing that is exclusively hers, she says: It’s her way of expressing pent-up creativity. “I guess I have an unusual appetite for the little decisions that might bore someone else to death,” she says. “I love picking out hardware, lighting, 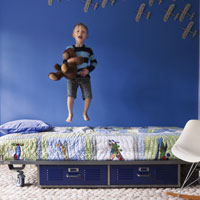 and the perfect shrubs — and spending hours in the garden planting them.”

Excited to have an expansive canvas “to test out all of the ideas in the design universe,” she was lucky enough to find “rock star” general contractor Bill Friel. Thanks to the depth of Friel’s experience, he was a tremendous resource for her every obsession. She appreciated him most, she adds, because he had an “anything is possible” attitude, granting her free rein to try things out.