Learn About the Secret Life of the Creator of Wonder Woman

The film Professor Marston and the Wonder Women explores the life of a secret revolutionary. 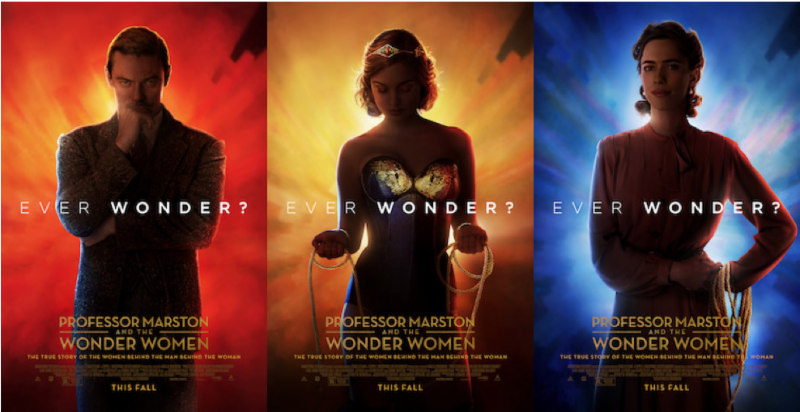 If you saw the recent Wonder Woman movie, what was your favorite part? Was it when Diana deflected bullets off of her bracelets? Or maybe the shining golden lasso she used to compel people to tell the truth? Or possibly what you really enjoyed was her commitment to peace and anti-war message, an unusual goal for a superhero.

If it was any of those things, you’re doing exactly what William Moulton Marston planned. Marston, the Harvard-educated, Massachusetts-born creator of Wonder Woman, had a lot of specific ideas in mind for his female superhero, who became one of the most popular comic book characters of all time. He also had what director Angela Robinson calls a “sprawling, epic life,” which is why she wrote and directed “Professor Marston and the Wonder Women,” about him and the women in his life.

Yes, that’s women, plural. He and his wife Elizabeth, had a live-in companion named Olive Byrne, who also had children with Marston, and after his death, spent the rest of her life living with Elizabeth. Oh, and he more or less invented the lie detector test. And Olive’s aunt was Margaret Sanger, the early birth control crusader. And the trio were all involved in research in the very early days of the field of psychology. The list goes on.

“I could have written about the Marstons forever,” admits Robinson. It’s the rare movie that has a love story between three people at the center of it, though, and Robinson was keen to avoid making a bigger issue of this than she needed to. “I’m really aware of how important representation is to me and to other people,” says Robinson. “It was really important to me to create not only the Wonder Woman character respectfully, but without shying away from the sexuality.”

Wonder Woman’s bondage elements have always raised eyebrows, given her propensity to get tied up, and the movie doesn’t pretend that Marston was completely unaware of that. “I did a lot of work, when they get into the kink aspects of their story and their relationship, to try to treat it organically as a love story without winking. I didn’t want to otherwise their experience,” she says.

And so Olive falls in love with William, and with Elizabeth, and both of them fall in love with her too. Byrne also commonly wore silver bracelets, and of course the lasso is pretty clearly a representation of Marston’s work with the lie detector test. “Marston himself was hiding Easter Eggs from his life in the Wonder Woman comics,” explains Robinson.

The movie filmed around Massachusetts, finding locations in Arlington, as well as Tewksbury, though of course Harvard has changed a bit too much in the years since to look like it’s still 1929. Robinson did plenty of research about the era, but cautions that people’s perception of it may need some reworking. “People have this patina version of the past where nobody swore, nobody had sex, and that’s the furthest thing from the truth,” says Robinson.

Naturally, the trio runs into some resistance among people who don’t approve of how they’re living their lives, but they remain committed to each other, and that was part of why Robinson was inspired by their story.