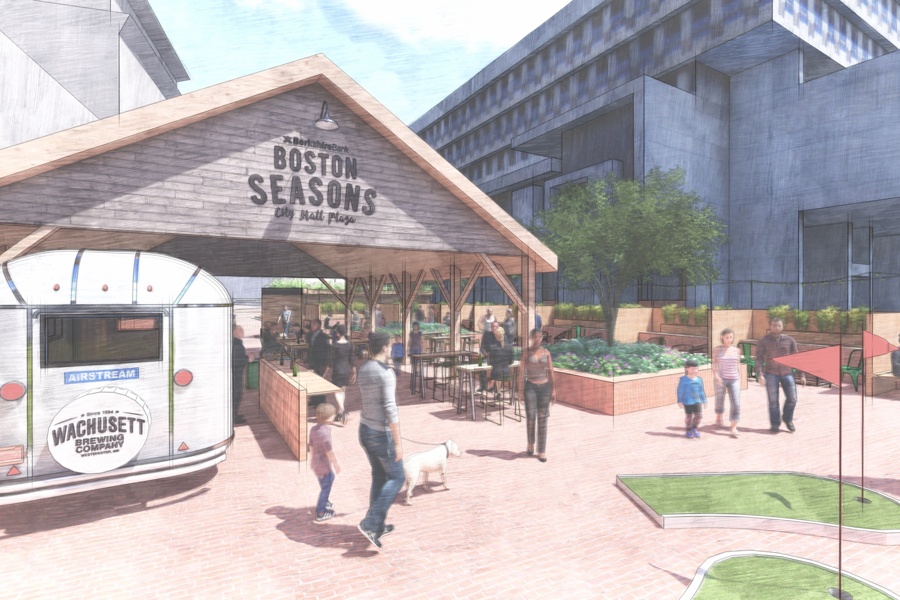 Rendering via ‘The Patios’ presented by Berkshire Bank

If and when summer actually arrives in Boston this year, there will be a whole bunch of summery things to do on City Hall Plaza this season. To paraphrase Stefon, the latest upgrade in Government Center will have everything: Beer, ice cream, mini golf, and puppies.

Called “The Patios,” the space will occupy the southeast corner of the plaza and feature a Wachusett Brew Yard (which will host several tap takeovers with local breweries), ice cream from Best of Boston winner Honeycomb Creamery, the Boston Public Library’s Bibliocycle, picnic giveaways from Boston Public Market, a bunch of events, and five holes of mini golf. The visits from the puppies will be every Wednesday from 12-2 p.m., courtesy of Dedham-based shelter Schultz’s Guest House. Which also means there will be visits from us.

The design, which will blend reclaimed wood and an “infusion of greenery,” comes from South End sculptor Jeff Smith, who also built a giant Instagrammable wooden “BOSTON” sign. Smith was artist behind the “Smallest House in the World” project that made waves when it was listed on Airbnb last year. A giant barn will be erected there by the Circle B Barn Company, of Lexington.

This is the latest improvement at City Hall Plaza to come from a deal with TD Garden operator Delaware North, which has a three-year contract with the city to revitalize the drab, underused plaza with seasonal programming. “The Patios” will be the first summertime offering from the partnership, which we have to thank for the skating rink, après ski lounge, and gift chalets of “Boston Winter.” It’s presented by Berkshire Bank.

“We’re excited to welcome the next round of family-friendly and fun activations to City Hall Plaza as the weather continues to get warmer here in Boston,” said Mayor Martin J. Walsh. “Our partners at Boston Garden Development Corporation have shown the potential in making the plaza a downtown destination for all with a record number of visitors at Boston Winter this year, and I look forward to another season of success.” 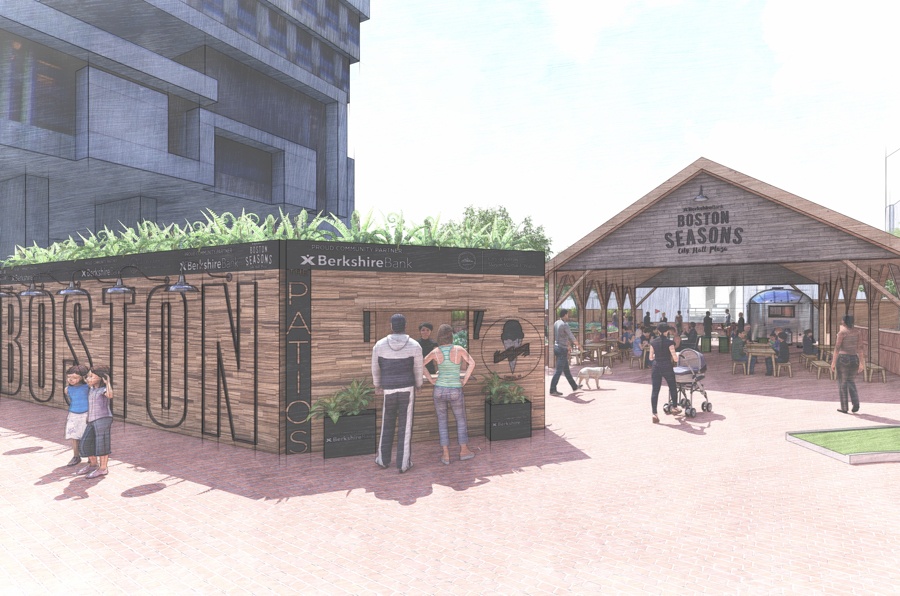