Why Are So Many Scary Movies Set in New England?

Hollywood loves to make horror films here. Why? Consider our region's haunted history—and how much we look the part. 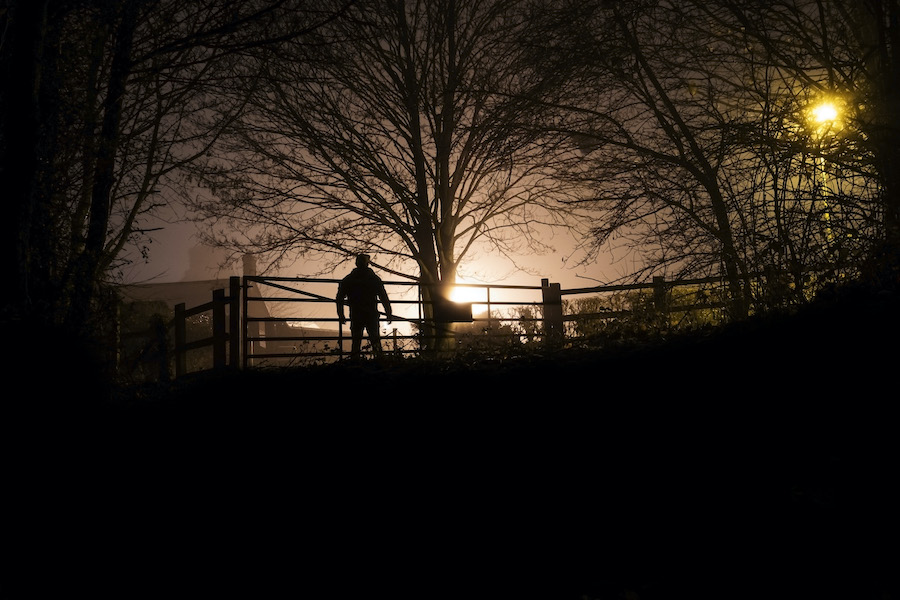 As an avowed aficionado of horror films, I get a lot of interesting questions (and, sometimes, interesting looks) from friends. A few come up more than others: “Why do you like being scared?” “Who is the ultimate scream queen?” “Why are so many scary movies set in New England?”

I’ve got ready-to-go responses to the first two. (“Why don’t you?” and “her highness Jamie Lee Curtis,” respectively.) I guess I’ve spent a little less time thinking about the third, though. As a native New Englander, it’s always seemed self-evident to me that ours is the region best suited to tales of things that go bump in the night—why, Edgar Allan Poe, H.P. Lovecraft, and other seminal spook-mongers were born here! We were home to one of the world’s most infamous witch trials! It’s dark and cold half of the year; even the weather is scary!

Still, it’s a question that’s really worth unpacking this year, when Halloween revelry is pretty much cancelled and we’ll all spend that much more time having horror-movie marathons on the couch. Indeed, a quick browse through Netflix—or even better, the horror movie streaming service Shudder—proves the premise: From relatively recent flicks, like the Rhode Island-set hit The Conjuring, to nostalgic titles like Cujo (or anything else written by Maine’s own Stephen King), New England seems to be an overwhelmingly popular place for horror films. Why?

The clearest answer, I think, is in the name: New England. For early European settlers who arrived after harrowing weeks at sea, this is the place that represented a great, scary unknown in which survival was very uncertain; for indigenous people, meanwhile, colonization meant genocide. Whether passed down orally as fearsome folklore or committed to ink by early American authors, from the very beginning of what we now know as New England, the stories we’ve been telling have always been—well, pretty bleak. “Massachusetts is a primordial entry point of European anxieties,” says K Lynch, founder of the Salem Horror Fest. The film festival, which held its virtual 2020 installment last week, uses scary movies to explore real-life cultural and political horrors. “I think horror takes to New England so commonly because we have yet to unpack our dark past.”

And Lynch isn’t the only horror expert who looks back to explain our curious craving for horror. “New England is considered this old, haunted place because there’s been some dark chapters in American history here,” says Kevin Monahan, artistic director of the horror-oriented Boston Underground Film Festival, which even curates an annual Homegrown Horror series of New England-made short films. This year, BUFF also partnered with a few other regional organizations—including the Brooklyn Horror Film Festival and Miami-founded Popcorn Frights Film Festival—to launch the just-wrapped Nightstream virtual festival, which was focused on frightening fare.

Lynch and Monahan have a point about the area’s history: Not only should we consider the role that early colonies played in the decimation of indigenous communities, but there’s also all those bodies that fell on historic American Revolution battlefields, and of course, the accused witches tragically hanged in Salem. If you’ve ever seen an episode of Ghost Hunters, a long-running TV series about a pair of Rhode Island plumbers turned paranormalists (and trust me, I’ve seen a few), you know the theory that houses become haunted when tragic events leave behind a spiritual imprint. Could the same be true of a whole region? Could filmmakers just be picking up on spooky, supernatural energy that’s stamped on New England like a stubborn bloodstain? (They’re so hard to get out of things, he adds with a malevolent cackle.)

Okay, okay—even if you’re not the kind of believer who speaks fluent Ouija Board, there’s a very practical reason why New England is synonymous with scary movies: We look idyllic yet eerie, like a page ripped from a Halloween storybook. The Hollywood Hills just don’t have the same macabre charm as our rolling fields filled with old farms, or the dark, gnarled woods that once inspired fire-and-brimstone-breathing Puritans to warn of demons that lurked in the shadows. (See: 2015’s The Witch.) Everywhere you look there’s a crumbling cemetery (or even a Pet Sematary), a rambling old Victorian that could easily be inhabited by some kind of freaky cult (as in 2009’s Connecticut-filmed creep-fest The House of the Devil), or even a decrepit former sanitarium that’s ripe for a’haunting. (2001’s Session 9 was filmed at the since-demolished Danvers State Hospital, which had a horrifying history of performing prefrontal lobotomies, among other troubling practices.)

Even our famous foliage probably plays a major role in things. “Horror stories are best told in the fall, and where is there a better autumn than in New England?” says Mark Anastasio, program manager and director of special programming for Coolidge Corner Theatre. Before the pandemic, Anastasio hosted the Coolidge’s “After Midnite” movie series every weekend. Lately he’s been producing outdoor horror screenings, including this weekend’s pop-up drive-in (a double feature of The Thing and They Live) on the abandoned grounds of Medfield State Hospital, where the Martin Scorsese-directed psychological horror movie Shutter Island was filmed. Over at the nearby Rocky Woods reservation, meanwhile, Anastasio will soon host Evil Dead and Friday the 13th double bills, as well as a 12-hour Halloween marathon dedicated to werewolf movies.

Anastasio says that moving movies outdoors has only underscored how creepy our part of the country is. “Whenever we’re screening in a wooded area, there’s that added mystique of the forest—especially in New England, with all its history,” Anastasio says. “Being outdoors makes you feel a little more vulnerable.”

“October in New England is just the perfect setting for scary stories,” he adds. We’re all the luckier for it, I think. Would you rather be the capital of romantic comedies? Horror flicks give us edge: Sure, we look wholesome as a Norman Rockwell painting—but under the surface, we’re drawn to dark tales. They’re simply in our blood.