Tatyana McFadden’s Tough Road Back to the Boston Marathon

The paralympian battled back from blood clot issues to compete again in marathons. 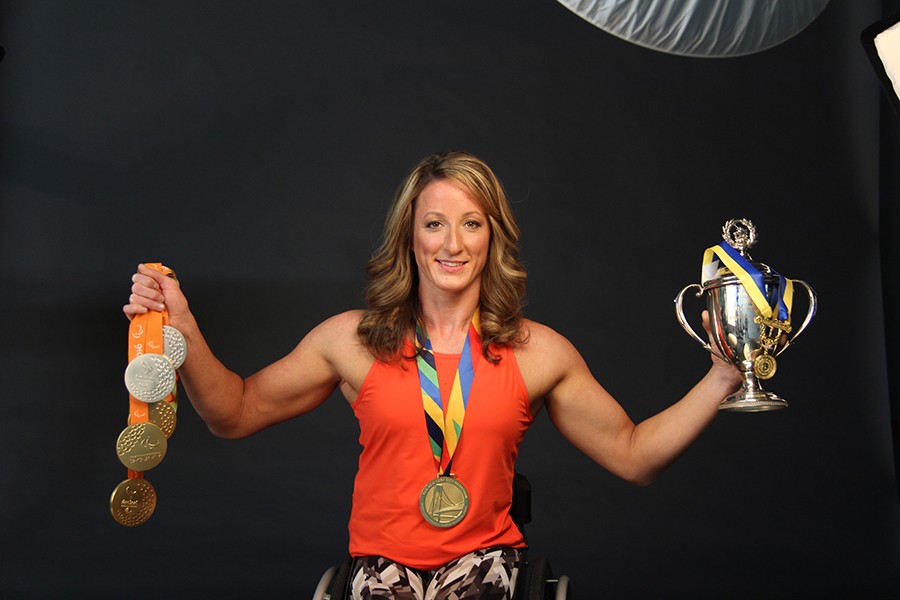 Tatyana McFadden, 28, is a familiar face at the Boston Marathon—the paralympian has won the women’s wheelchair division four times. The Russian-born athlete is no stranger to success, but she’s also no stranger to adversity, uphill climbs (which she’s actually really good at), and hard work. She’s making a return to the Boston Marathon this year after a surprisingly difficult 2017 season and a condition that almost prevented her from competing ever again.

McFadden, born with spina bifida, may go down in history as the greatest wheelchair athlete in the world. At 15, she was the youngest athlete to compete on the U.S. Paralympic team in 2004 in Athens, when she returned home with two medals. She became the first athlete in history to win six gold medals at the same event at the 2013 World Championships and by the Rio games in 2016 her medal count had reached 17.

“In wheelchair racing you don’t typically hit your prime until you’re in your late 30s, early 40s,” McFadden’s mother Deborah McFadden says. “When she first told me she wanted to try out for Team USA I thought it would be a good experience. I never thought she would come home with a silver and bronze medal before she even started high school.”

At the time, McFadden was racing in sprint events, but now she’s a veteran for every distance. In 2009 she began racing on the marathon circuit and by 2013 became the first person, man, woman, able-bodied or disabled, to win the Grand Slam (four World Major Marathons in the same year) and then repeated this feat over the next three years.

“When people first look at Tatyana, they might notice the chair first,” Deborah says. “But when she’s wearing a short-sleeved shirt they notice her muscles and her strong upper body. She’s got the guns, they say. And if you were to ask her, she wouldn’t say being in the wheelchair is her disability, it would be the blood clots.”

In November of 2016 Tatyana noticed swelling around her legs. She didn’t think too much of it—being an elite athlete, she was in top condition and wasn’t experiencing other symptoms, and without having feeling in her lower body, she couldn’t tell her feet were in pain. It wasn’t until she wasn’t able to fit in her race chair that she knew something was very wrong.

“I underwent some testing when I was in training camp in California and they found out I had severe blood clotting. They put me on blood thinners so I could fly home to Maryland, where I underwent three surgeries at John Hopkins, but none of them seemed to work,” McFadden says. “It was scary. I didn’t know what my future would hold.” Left unchecked, blood clots that develop in the legs can break off and travel to the lungs, causing pulmonary embolism and becoming fatal.

By August of 2017, McFadden and her mom were frustrated and looking for answers. Luckily, a college friend of McFadden’s mom recommended they reach out to Dr. Michael Jaff, leading vascular physician and president of Newton-Wellesley Hospital.

“When we first met, both Tatyana and her mom were expecting another big procedure,” Jaff says. “I didn’t believe that was the fastest way to get her back to racing. Sometimes the best thing in health care is to not do anything at all. With close collaboration and a little bit of time I was sure I could get her back to racing.”

Since then, Jaff and his medical team came up with a theory as to why McFadden continued to have blood clots that other doctors couldn’t seem to explain. “They went in and looked at the clots in more detail and realized that my blood was slowing down,” McFadden says. “Being born with spina bifida I have only one kidney and they theorized there was no open and direct route for the vein blood to travel back to my heart.” It turned out that her greatest form of treatment for something like this was to continue exercising. It’s certainly not easy, Deborah says—it affects every minute of her life. She has to compress her legs 4-5 times a day and will forever be on blood thinning medication, but with monitoring and continuous communication with Jaff, she has remained free of any new clots.

“To have the entire medical team there in my room during that first visit meant a lot to me,” McFadden says. “To now be free of any new blood clots and have training for Boston go so well, I’m excited to make a comeback this year and hopefully finish within the top three.”

After winning 18 straight marathons, coming in fourth at the Boston Marathon last year might have seemed like a disappointment. But McFadden had been in the ICU just ten 10 days before,  and to just finish the race was nothing short of miraculous. This year, she is coming off a second place finish last month in Tokyo and says it was great practice for Boston.

“She is an extraordinary person and athlete and will accomplish more than any of us ever will,” Jaff says. “It is very uncommon in a doctor’s life to meet someone who motivates you as much as Tatyana motivates me.”

In celebration of reuniting with Jaff during marathon weekend, Newton-Wellesley Hospital will host a pep rally for her on Friday, April 13, at 2:30 p.m.

“I love visiting with patients, because I think it is my responsibility to show them that even though we might be in a wheelchair or going through some tough things, that it is not a barrier,” McFadden says. “It is the mind that is the barrier, and it’s about figuring out a way to do what you want to do, no matter what.”