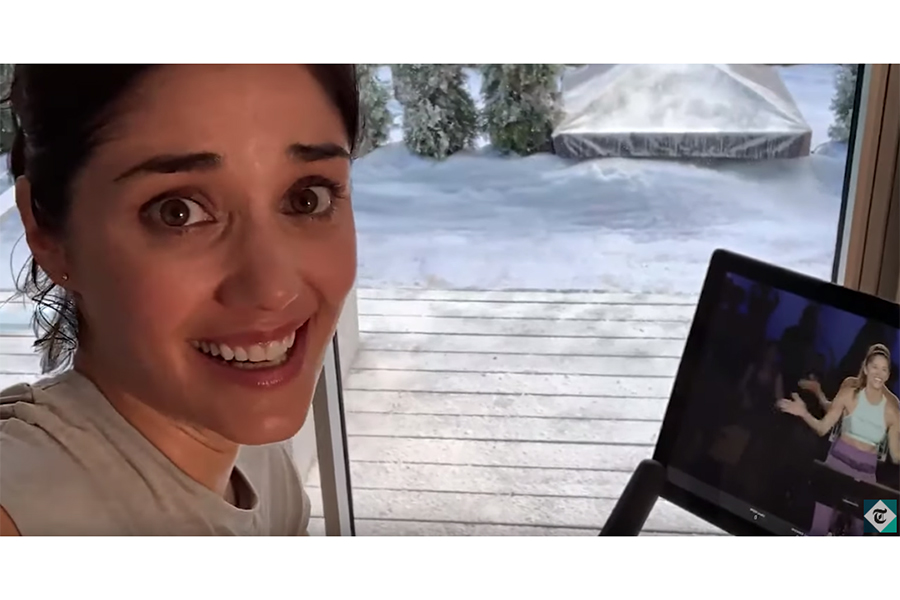 A new Peloton ad has taken the internet by storm in recent days, with critics calling it sexist, problematic, and even “the best horror movie in recent memory.” It even made the luxe stationary bike’s stock drop by nearly 10 percent in just one day. It features “Grace from Boston,” as she’s called in the Peloton video, who is gifted the trendy $2,245 stationary bike for Christmas from her partner, and who then records video clips of her “transformative” journey with the new piece of equipment.

During the 30 second video, she films herself religiously using the bike in what appears to be short selfie videos you might see your favorite fitness instructor debut on their Instagram feed. But her facial expression throughout is not one of gratitude or motivation—it’s one of apprehension, and it isn’t made clear until the end of the video that her short clips aren’t meant for herself, they’re meant for her partner.

It’s weird and rather cringe-worthy, but I have to say, it’s not all that surprising. It speaks to Peloton’s audience perfectly. It features a thin and already fit woman, in a beautiful house (that looks exactly like a waterfront penthouse in the Seaport, but nothing like your cramped apartment), and it plays perfectly into the performative nature of the fitness industry. Peloton actually checked all their boxes. We’re not mad at Peloton. We’re mad at the industry.

The people who can afford Peloton bikes, and gift them to their loved ones, aren’t thinking about the price point, or if it will help their partner lose weight, or the fitness benefits the bike might actually give them. They’re thinking about how great of a gift this will make for their fitness-forward partner, who probably already has it all. What else are you supposed to gift someone who has everything, if not a bike that goes nowhere?

“Grace from Boston” is clearly this fitness-forward person with not only the disposable income for said bike, but also a trainer, meal prep services, and boutique fitness classes at $30 a pop. Of course she looks great. And that’s not the problem either, because it would have been even more of an issue if the model were anything but, given the context of the ad.

Peloton wasn’t saying that her life was transformed by weight loss either. That’s the assumption because that’s what we’re told fitness should be about. Actually, fitness should be about how it makes you feel in your body, how it connects you with others, and what you discover about yourself when you wake up at the crack of dawn to become better—but that’s not made clear, especially not with “Grace from Boston’s” horrified facial expressions about even getting on the damn bike.

She’s not motivated and empowered. She’s seeking validation. Whether that validation is coming from people on the internet or her partner sitting next to her on the couch, she’s not riding for herself, she’s clearly riding for them. She’s riding for him. The greatest gift we can give someone is the space and time to be themselves, and to do what it is that they love. It doesn’t look like “Grace from Boston” loves Peloton. It looks like she loves the idea of pleasing her husband.

It should go without saying that sometimes we need a push from the ones we love to become healthier and better versions of ourselves, but Peloton missed the mark to showcase that aspect of wellness.

Most importantly, if someone buys you a piece of fitness equipment this Christmas, don’t assume it’s laced with underwritten notions that you’re lazy and need to lose weight. As an avid fitness consumer, I’d gleefully take any type of contribution to my fitness expenses and believe wholeheartedly that anything to get people moving a little more is a good thing. But you don’t have to keep anything you don’t want—including a misogynistic partner implying a thin woman should be even thinner. Just politely return the offer and move on with your life.