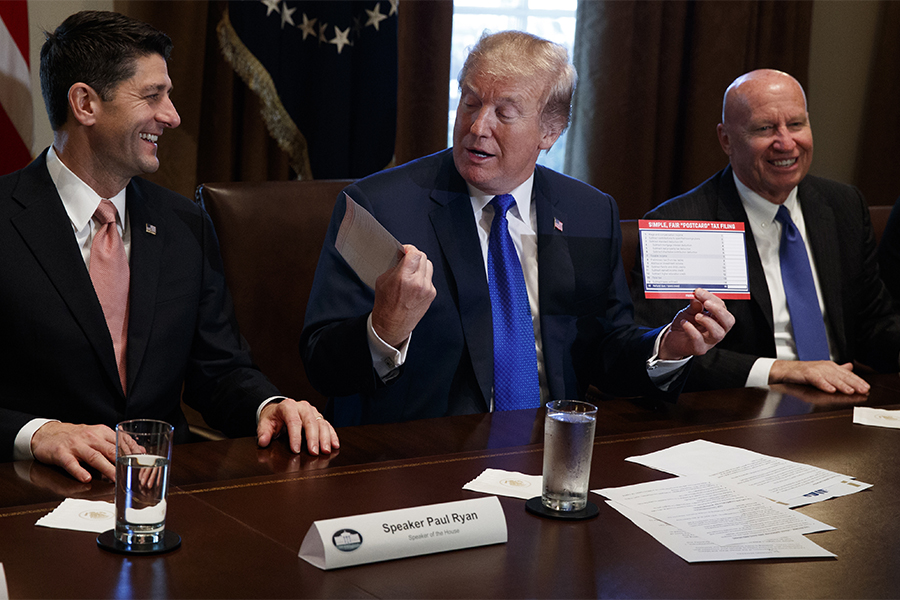 President Donald Trump holds an example of what a new tax form may look like during a meeting on tax policy with Republican lawmakers in the Cabinet Room of the White House, Thursday, Nov. 2, 2017, in Washington, with House Speaker Paul Ryan, R-Wis., and Chairman of the House Ways and Means Committee Rep. Kevin Brady, R-Texas, right. (AP Photo/Evan Vucci)

House Republicans have finally released their big tax overhaul plan on Thursday, and unsurprisingly, it did not go over well with the state’s lawmakers.

If approved, the rewritten tax code would do big things for big business, moderate amounts for the middle class, and damage to those relying on certain mortgage deductions. That third category, according to the Boston Globe, comprises many of Massachusetts’ wealthy home buyers, who would be negatively affected by the proposed cap to the amount of loan interest and property tax deductions they can leverage.

Right now, taxpayers can write off the interest payments they make on their first $1 million in home loans. The new bill, however, would lower that barometer to the first $500,000 in loans, making it more expensive to buy a house. Charlie Nilsen, the national director of residential lending at Boston Private Bank, told the Globe that there’s hardly “any good news in this for the housing market in Boston.”

The Boston-metro area is already one of the most expensive places to buy property in the country, and there 46 municipalities in Massachusetts where the median sales price for a home topped $650,000 in September 2017, according to the state’s association of realtors. In places like Brookline, where the median sale price in September was nearly $1.9 million, or Wellesley, where it was $1.4 million, the change to the mortgage interest deduction would likely be acutely felt.

Massachusetts’ Democratic lawmakers were swift to condemn the bill, which Republicans aim to rush to President Trump before Christmas. Sen. Elizabeth Warren told PBS News Hour on Thursday that the proposal contains “$2 trillion in giveaways to giant corporations.” She went on to assail the GOP talking point that giving businesses a break brings jobs and higher wages to average Americans, calling it “the big lie that the Republicans have been selling now for decades.”

Rep. Richard Neal also disapproved of the plan, criticizing the secretive, partisan processes that lead to its conception and saying in a statement that the new tax code is “over 400 pages of broken promises to middle-class families.” Rep. Niki Tsongas expressed similar disdain for the hush-hush process.

We need responsible/bipartisan/balanced tax reform. GOP plan is none of those: written in secret, burdens hardworking families & ups deficit

Rep. Seth Moulton took to Twitter the lambaste the favor granted to businesses; and Rep. Joe Kennedy III chimed in to emphasize how the proposal favors the rich at the expense of the average American.

We should be cutting taxes for new, small businesses that create new jobs, NOT for the largest multinational corps that shut down mainstreet

Just like #Trumpcare, GOP tax cuts ask the struggling and striving to sacrifice while the healthy and wealthy are rewarded.

For his part, a spokesman for Gov. Charlie Baker told Politico that the governor wasn’t thrilled with the process that lead to the proposal, and he “has serious concerns about the impact that eliminating the state and local tax deduction would have on Massachusetts families.”

According to the New York Times, the first official “markup” of the bill is on the docket for Monday.