A Dizzying Night with Jordan Peterson in Boston

Besieged by bad press, the right's favorite celebrity psychologist took the stage at the Shubert. 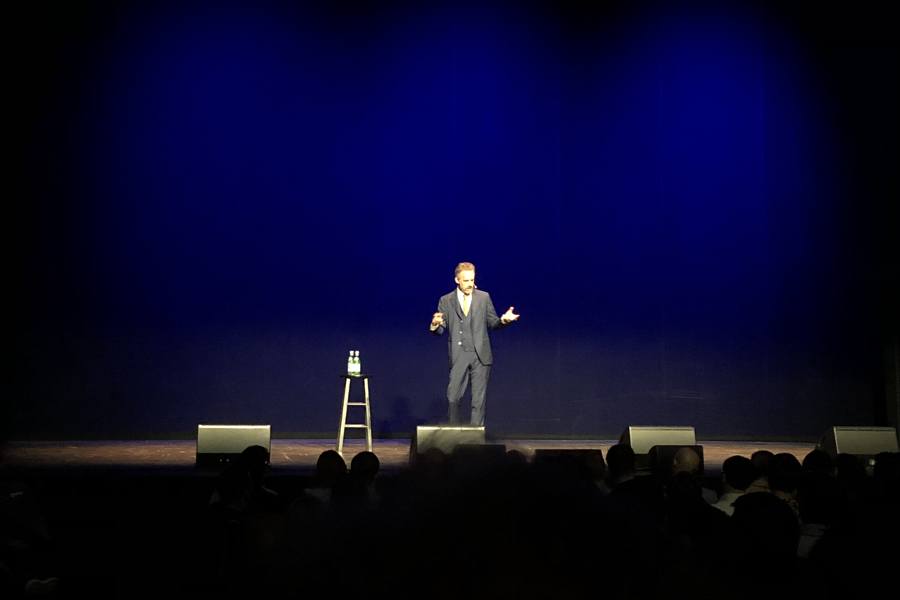 From the second he walks out onto the stage at Boston’s Shubert Theater, wearing a three-piece suit and one of those headset microphones, Jordan Peterson is going.

“Diversity, inclusivity, and equity,” he says, “there’s something about that triad of ideas that when implemented in the world produce cataclysmic consequences.” He tells us he’s been asked to write the foreword to The Gulag Archipelago, a dense chronicle of the horrors of Soviet prisons, and he’s puzzling through what he wants it to say about our current political moment. “I think of those three, the most toxic is equity, which is a code word for equality of outcome. There’s just something about equality of outcome that’s just destined for catastrophe.”

The suddenly wildly popular Canadian psychologist, podcaster, YouTube star and self-help book author—beloved by many on the American right wing, hated on the left—swung through Boston on Tuesday as part of his 50-stop speaking tour. He was greeted by a crowd of 1,500 people—mostly young men, but plenty of women, older guys, and at least one entire family—eager to see the most polarizing professor in North America in the flesh.

“I don’t know about you, but I’m tired of hearing about people’s rights!” he says, which the crowd greets with a round of applause. “Because the other side of the story is missing. It’s like, your rights are my responsibilities, and vice versa. It’s part of the social contract. That’s why you can’t multiply rights to no end, because you multiply responsibilities.”

The thing is, he says, staring sternly at the floor and gesturing with his hands, if today’s liberals keep going down the path they’re on, we’re doomed, just like the Soviets. So what he hopes to offer at the front of the book, and during his lecture inside the packed, ornate venue, is an “alternative to collectivism” that might keep the gulags at bay.

Peterson arrived here under a gigantic microscope. Last week, the New York Times published a widely read profile of him that dubbed Peterson the “Custodian of the Patriarchy,” and he has been intensely criticized for endorsing something called “enforced monogamy” as a way of placating sexless young men, and preventing mass murders.

Inside the Shubert, though, the room is rapt—so silent, it might as well be empty. There’s something about him that just clicks for some people.

Speaking without notes on Tuesday, he embarks on an improvised, freewheeling hour-and-a-half, jumping from tangent to tangent, citing philosophers and obscure scientific studies, drawing diagrams with his hands in the air. Before we’re done, he’ll make references to lab mice, children’s hockey, tent cities in San Diego, the daydream-like visions that pop into his head during therapy sessions, a triptych of Jesus he saw in a church, and the journals written by the Columbine shooters—all of it tied together into his grand theory on the importance of “personal responsibility.” This nightly journey into his thoughts is different every time he goes on stage, he tells us. And each time, “I’m trying to think farther.”

It’s all very appealing to his legions of fans.

“I’ve kind of realized I’ve been indoctrinated to the left my whole life, ever since elementary school,” 20-year-old East Boston resident Alex Mendoza, a psychology student at Mass Bay Community College, tells me outside the theater. He says Peterson’s teachings have helped him think through his right-of-center politics, adding that his family, which hails from Mexico, does not support his views. “I’ve seen the spark of truth,” he tells me. “I became a free thinker.” His classmate, 20-year-old RJ Franick, tells me Peterson is “the greatest intellectual of our time,” and he means it. He adds, “The backlash that he’s gotten and the unfair slander that he gets all the time—being characterized as a Nazi, being characterized as alt-right—I think that’s very sad.”

At one point, during a Q+A session, Peterson says he’ll explain once and for all what he meant by that now-infamous “enforced monogamy” comment (he meant social norms should encourage monogamous pairings), and asks the crowd in Boston to film the response and share it far and wide. Many do. He’ll later say all this negative attention doesn’t bug him at all.