Poll: Baker and Warren Lead Gonzalez and Diehl by a Wide Margin

The odds of a November shakeup do not look so good. 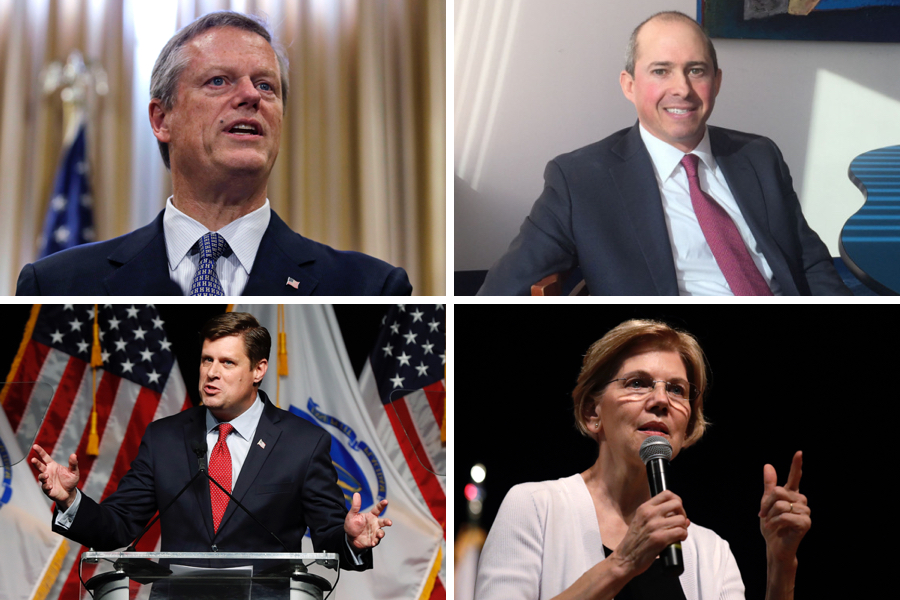 With the general election less than two months away, Republican Charlie Baker and Democrat Elizabeth Warren are looking pretty damn safe. So if you’re hoping for a shakeup come November like we saw in the primaries, the odds do not look good.

So says a new poll from Suffolk University and the Boston Globe, which found that the governor and senator have huge margins over their opponents, Democrat Jay Gonzalez and Republican Geoff Diehl.

In the race for governor, Baker leads Gonzalez 55 percent to 28 percent, a 27-point gap, the survey of voters found. That’s bad news for Gonzalez, a former member of the Gov. Deval Patrick administration, but there are other uninspiring numbers in the findings, even within his own party. Despite a hard-fought primary, a third of Democrats had never heard of him. And enough voters are charmed by the self-styled moderate Baker’s finger-wagging when it comes to Donald Trump—he’s anti-Trump, but perfectly comfortable standing by the pro-Trump Diehl—that about about 40 percent of Democrats said they would vote for Baker.

Gonzalez has tried with all his might to tie Baker to Trump, and he may succeed in doing so. He may also motivate Dems with proposals for major progressive projects, including a huge expansion of early childhood care and an overhaul of the MBTA, and today unveiled a plan to tax the high-dollar endowments of freeloading colleges to get there. But 27 points is 27 points.

As for the Senate race, Elizabeth Warren enjoys a similarly comfortable lead of 54 percent to 24 percent. A polarizing figure in both parties, Warren has 84 percent support among Democrats, 44 percent among independents, and 5 percent from Republicans, according to the poll. Diehl has support from 77 percent of Republicans, 29 percent of independents, and just 2 percent of Democrats. The GOP is surely watching this race closely, and hoping to use it as an opportunity to pick a fight with Elizabeth Warren before a possible run for you-know-what in a few years’ time, but it’ll be an uphill battle to actually win. Shiva Ayyadurai, an independent fond of offensive memes, who is currently struggling to get time on the debate stage with the other two candidates, received support from 6 percent of voters.

The fight over Question 1, the ballot initiative that would establish new limits on the number of patients that can be assigned to nurses in Massachusetts hospitals, will be one to watch. Right now, 52 percent of the poll respondents say they are in favor of the new restrictions, while 33 percent are opposed and 15 percent are undecided. But this debate is far from over. Competing ad campaigns—which, confusingly, both feature nurses prominently—are likely to continue, and support could shift dramatically between now and November.

Meanwhile Question 3, an effort to repeal the new transgender rights law, looks like it’s going to be a blowout. The survey found 73 percent of voters support keeping the law, which prohibits discrimination against trans people in places like bathrooms, while only 17 percent want to trash it, and 9 percent are undecided. That is a major improvement from the last Suffolk/Globe poll on the subject, which found 49 percent in favor of keeping the law and 37 percent in favor of repeal. Can bogus, fear-mongering ads move the needle? I wouldn’t count on it.