The Celtics star on why video games are the future of sports and how Internet trolls just might be the secret to his success. 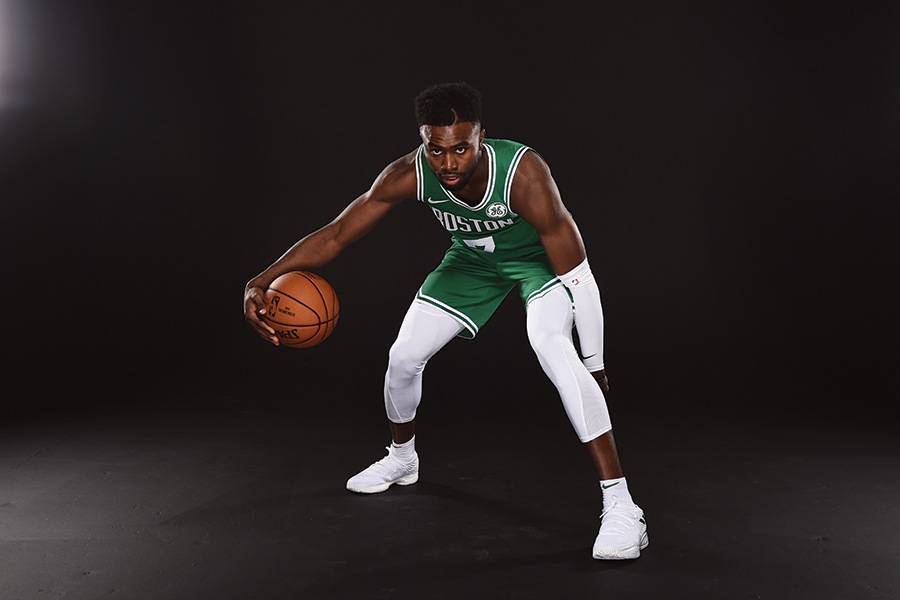 Jaylen Brown is a Renaissance man. He plays piano and guitar, speaks fluent Spanish, can beat you at chess, and recently packed lecture halls at Harvard and MIT, where he talked about everything from self-empowerment to the new frontiers of tech. Oh, and for his day job, the 6-foot-7, 22-year-old guard slashes through defenses and dunks on opponents’ heads. Is there anything he can’t do? After an early-season practice at the team’s gleaming new Auerbach Center in Brighton, Brown sat courtside to talk about the city he’s learning to call home, and the one thing he truly fears.

I heard you’re terrified of clowns.

Who told you that?

I can’t reveal my sources. Is it true?

What’s the story? Did you watch It as a kid or something?

You know, I remember people saying that It [the 2017 movie] was funny. But it was terrifying. A paranormal clown? Oh, man. Look, don’t clowns just freak you out? The way they look? The red hair, the big eyes, the elastic lip. That doesn’t bother anyone else? It bothers me.

You’re now at the start of your third season with the Celtics. Is Boston beginning to finally feel like home?

Every day is a new day. It’s a constant work in progress. I’ve been embedding myself more and more each year into the city, and I feel like I’m just starting to learn more about the people here and more about the culture and what it has to offer.

You moved here straight out of college from the University of California, Berkeley. Boston is a lot of things, but it’s not laid-back. Does it feel more intense here?

Absolutely, 100 percent. And I think a lot of that has to do with the weather. There’s something about cold weather that makes people tough, it makes them angry, it makes them pissed off. Back in Berkeley, nobody really got mad at anything. There was great weather and everyone was laid-back.

It’s hard, man. It’s a different era, especially if you’re struggling. In the past, if someone was in a slump, people might be talking about it but the player didn’t really know what people were saying. Now people can constantly tell you how shitty you played or how bad you’ve been or whatever they want to tell you. And so it’s hard not to be engulfed in that, but it’s part of life.

Do you engage with the trolls?

No, I don’t. I definitely don’t engage. But honestly, sometimes it’s good to see it. Sometimes I just want to check it out to humble myself. It gives me motivation. So sometimes if I need a source of motivation I’ll go on Twitter and look at all the people talking trash about me and sometimes it just really fires me up. But I’m not going to change what I’m doing in any sort of way because of what people are saying on Twitter.

During the season opener this year against Philadelphia, you threw down what’s been called a “pseudo dunk” on big man Joel Embiid that went viral. How many times did you watch the replay?

I watched it a few times. I didn’t see what the big deal about it was, though. People made it more glamorous than what it was. Obviously, it was two really athletic guys going up and competing against each other, and I came out on top. In terms of athleticism, it was impressive. But in actuality, I got a little lucky because he had a pretty good chance of blocking it. But the ball found its way in, and I’ll take it.

But do you consider it a dunk or a so-called pseudo dunk?

As someone who’s dunked on a lot of people, I wouldn’t consider it a dunk. If anything, I would just consider it two points and I’ll leave it at that. That’s all it was.

We’re in the post-Moneyball world, where teams are looking at every statistic possible to gain an edge. The Celtics are out in front on that in the NBA. Is it helpful or actually more of a distraction?

In today’s game, it’s hard not to pay attention to it. Looking at stats and metrics makes a lot of sense in a way because the simple truth is numbers don’t lie. That’s a phrase a lot of people use when talking about this trend. But sometimes, numbers can bend the truth.

Well, sometimes I have really good numbers but I had a really shitty game. Other nights I have a good game but really bad numbers. So it goes both ways. I pay attention to it, but I take it all with a grain of salt.

How do you manage the mental grind of playing 82 games in an NBA season?

I mean, that’s just the beauty of basketball. You have this opportunity to come out each night and do something spectacular. When you’re struggling, or you’re not playing as well as you know you can play, you get an opportunity to change it. It’s similar to life off the court. At some points in life, you’re not going to be at your best. And so how do you respond to that? Do you lie with your head down and marinate in it? Or do you figure out ways to improve and get yourself up over the hump?

How do you personally deal with that, whether it’s a slump on or off the court?

I refer back to what I know. A lot of time it’s key to know what your foundation is. When people hit hard times and they don’t have a foundation, then they are going to break under any pressure that’s put on them.

So what’s your foundation?

I refer back to my hard work. I know all the work I’ve put in over the years, and I have trust in it. So when I hit hard times, I know I just have to work harder.

I don’t like putting any titles or labels on it, but I really enjoy vegetarian food. Almost all of this past summer I ate vegetarian food. But then I visited my grandmother and she made her baked chicken, and there was no way she was taking no for an answer.

Do you have any go-to vegetarian restaurants in Boston?

I haven’t been to very many spots because I have my own chef.

Well, that makes it easier.

Yeah, he makes some pretty awesome stuff. He makes everything taste real good, so I have that to go to.

What was the last movie you watched on Netflix?

I think it might have been Moana, the Disney film. I watched that with my niece.

Who’s getting heavy play on your Spotify lately?

You’ve expressed interest in finance. Have you put any of your NBA money into Bitcoin or cryptocurrencies?

At this point I’m still educating myself in terms of understanding exactly what a cryptocurrency is and how it works, and what blockchain is and how it works. It’s not the easiest thing to understand. I’ve done a lot of research over the past two years, but I’m trying to get a full grasp before I make any moves.

Clearly, you’re a man of science. Did you ever try to talk some sense into teammate Kyrie Irving when he was on his kick telling everyone the earth is flat?

I debated him and tried to give him a way out when I first met him and he was saying that stuff. But you know, I agreed in a sense.

You agreed that the world is flat?

No, I agreed that the world could appear to be flat in a sense to some people. It’s a matter of perspective. If you’re sitting on a beach looking at the ocean and you see the sun rise from the sea and set behind it, one might think that it’s flat. And I can understand how if you only saw it from that perspective—the sun just disappear behind the sea—you could think that it’s possible to just fall off the end of the earth. It can appear that way. But there are many other things that tell us that the earth is not flat.

You’ve spoken at MIT and seem to be really into tech. What’s getting you excited on that front?

One thing that’s killing right now is Twitch, which is a streaming and broadcast platform that a lot of people use for video games. But you can use it for all types of stuff.

Does that mean you spend a lot of time sitting at home and playing video games while people watch you?

I’m now just getting into it. I’ve never been a big video game player because my mom was always, “Get off that game.” But now it’s the future. So I’m starting to put it into my routine—maybe I’ll play once or twice a week for like 30 minutes. So people will be watching me play through a stream online.

Does playing video games in front of people on the Internet make you feel like you’re under more of a microscope than playing ball in front of thousands of fans?

Yeah, probably, but I’m not that good. The difference is that you’re interacting with the people watching. I mean people are now filling up arenas to watch people play video games. How crazy is that?

I know that huge crowds show up to watch video game tournaments, but do you consider the folks who are actually playing the game to be playing a sport?

Absolutely. Wait until we see how VR [virtual reality] keeps advancing. I’ve been out to Facebook, which owns a company called Oculus, and they’re taking things to the next level. Video games are becoming much more physical than just pushing buttons on a controller. The VR games are going to be on a whole other level.

Do you have any personal goals for this season?

I want to make the NBA All-Defensive Team. And I want to be a contender for Defensive Player of the Year.

And what’s your hope for the team this season?

I just hope that we have a lot fun and that we win a lot of games.