Tonight: A Special Ceremony for the Toppled Cambridge Menorah

The mysterious "older Jewish gentleman," identified as a Pulitzer-winning journalist, will be there. 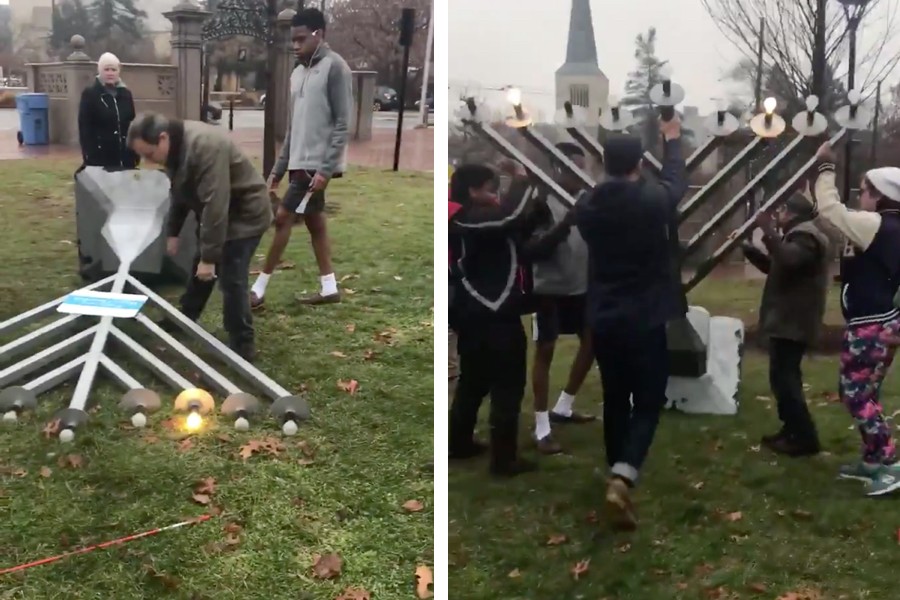 The mysterious “older Jewish gentleman” who helped right a toppled menorah in Cambridge will play a starring role at a special ceremony Thursday night.

Members of the Harvard Chabad, the group responsible for an electric menorah set up on Cambridge Common to celebrate the fifth night of Hanukkah, say they are inviting the community to come celebrate with the man, who garnered some internet fame this week after video surfaced on Sunday of a group of people hoisting the fallen religious symbol. Someone, identified as a white man in all-black on a bike, allegedly knocked it over around 3:30 p.m. before fleeing (police are now investigating the act as a possible hate crime). “We gathered some strangers to help us put it back up,” wrote a user who shared the video on Twitter. “Then the older, Jewish gentleman said a Hanukkah prayer.”

Walking past Cambridge Common today w @itsmejono, we saw the park menorah on the ground. 2 young women had witnessed a young man on a bike push it over with intent. We gathered some strangers to help us put it back up. Then the older, Jewish gentleman said a Hanukkah prayer. pic.twitter.com/dm5oX0aX0I

Organizers said they had discovered who the “gentleman” is and planned to “unmask” him at the ceremony. Journalist Ron Suskind has since, however, come forward to identify himself. “The passersby who gathered to lift the giant lead menorah and then joined me in a Hanukkah prayer represent the face of diverse, principled resistance to hate — a force, surely, that binds us across divides,” he wrote on Twitter. Suskind, formerly of the Wall Street Journal, won the Pulitzer Prize for Feature Writing in 2005 for his work focused on the aspirations of inner-city kids in Washington, D.C.

The lighting is scheduled for 5 p.m.