Elizabeth Warren Drank the “Club Soda of Beers” on Instagram

She celebrated her big announcement with an ice cold Michelob Ultra. 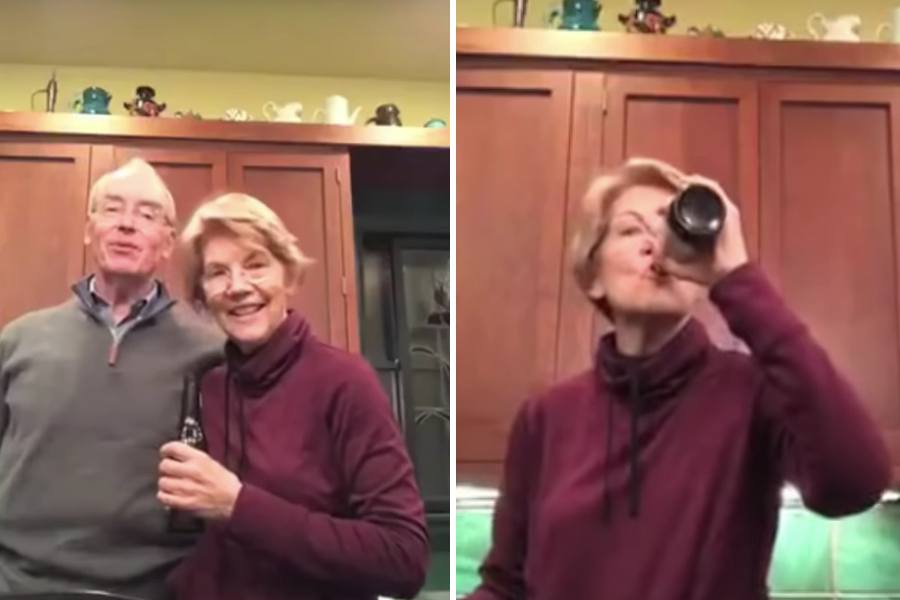 When Elizabeth Warren more or less launched her 2020 campaign on New Year’s Eve, the world was watching. So plenty tuned in to watch as the Senator flipped on an Instagram Live stream from the kitchen of her Cambridge home later that evening, and, in a totally natural and cool way, cracked open an ice cold brew.

“I’m gonna get me, um, a beer,” Warren said into the camera before retrieving a glass bottle from a fridge, as viewers pelted her with questions and pounded the Insta button that makes hearts show up on the screen. The video—reminiscent of the popular livestreams hosted by a certain soon-to-be-inaugurated Millennial—also featured cameos from her husband, Bruce Mann, and their dog, Bailey (who will supposedly be a fixture of the campaign).

As you might have imagined, not everyone was exactly buying the cracking-a-cold-one shtick (see: the Herald‘s front page, et cetera). The tweets, as they often are, were unkind. And in a moment where top Democrats and pundits seem fixated (fairly or not) on the question of whether she’s likable enough to be president, there were plenty of people primed to get an insincere vibe from a live video of an allegedly chill night in.

Still, asked about the video by reporters on Wednesday, Warren suggested there may be some more Instagram-side chats in the future as the campaign gets underway. “It’s one more way to be able just to invite people into your home,” Warren said. “I wish I could just open the door and let lots of folks in, but this is a way to do it so that we get a chance just to kind of talk about whats going on. What matters to me is that everything in this campaign is about the people who are out there every single day, work hard, play by the rules and just want a government that’s on their side.”

WARREN TO IOWA: Sen. Warren emerges from state House chamber to talk to reporters, responds to questions about Iowa, Instagramming her beer#mapolihttps://t.co/pOWUwzakSm

She also revealed that her brew of choice is a Michelob Ultra, which she dubbed “the club soda of beers.” Which in case you were wondering is not a phrase in wide use, but is frankly a not bad way to describe the low calorie, low flavor stuff.

It’s an open question whether the Instagram beer is a good or bad thing in terms of likability and so on. These things are an art, not a science. Donating her salary during the partial government shutdown, as she has pledged to do, might also help. But for what it’s worth, she has been on record as a beer drinker before, telling us last year that her “go-to order” at Paddy’s Lunch in Cambridge is “a light beer and a bag of Doritos.” So, checks out.