UPDATE: Olivia Ambrose, Missing Since Saturday, Has Been Found Alive

Olivia Ambrose, the 23-year-old who had been missing since Saturday after she was last seen at a downtown Boston bar, has been found alive.

Police say the Jamaica Plain resident “has been located and transported to an area hospital for evaluation purposes.” Suspect Victor Pena, 38, of Charlestown has been arrested and faces a kidnapping charge, police said in a press conference after a flurry of activity at Pena’s Walford Way apartment.

The announcement brings to an end a three-day search for Ambrose, who left Hennesy’s Bar near Faneuil Hall at about 11 p.m. Saturday.

UPDATE: 23-year-old Olivia Ambrose has been located and transported to an area hospital for evaluation purposes. Thank you to everybody who aided, helped and assisted in the investigation and search. A press conference is scheduled for 6:00pm at BPD Headquarters. pic.twitter.com/x4V6zhwlUv

Earlier, police released two pictures of a “person of interest” in the disappearance.

The man captured on surveillance video is wearing a light brown jacket, fingerless gloves, a black headband, dark pants, and black boots. Police did not say what his connection to the case might be, but asked anyone with information about his identity or Ambrose’s whereabouts to contact them via 911 or (617) 343-4248.

Police also released a timeline of what officers observed on clips from surveillance cameras in the area on the night of her disappearance. 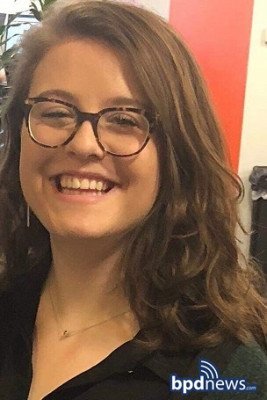 In footage that has not been released, police say Ambrose—who stands 5-feet-two-inches tall with blue eyes and curly brown hair, and was wearing a red corduroy dress under a long white and grey coat—can be seen leaving the bar on Union Street at 11:04 p.m. with a man, “who has since been determined to not be involved in her disappearance.”

About 40 minutes later, at 11:42 p.m., cameras spotted Ambrose two blocks away at the corner of State and Congress streets, where “two unknown males” approached and invited her to join them to the State Street MBTA stop. One of the men placed his arm around her, police say, and Ambrose and the unidentified man were later seen leaving the Community College stop in Charlestown with his arm still around her just after midnight. Cameras later recorded Ambrose and the man walking from the stop in the direction of the Boston Housing Authority building in Charlestown, which is the last place police tracked her cell phone.

A Facebook page had been set up to aid in the search for Ambrose, who is originally from Wenham and goes by the nickname “Liviy,” and her family and friends urged anyone with information to come forward.

Ambrose graduated from the University of Edinburgh in 2017 and has been a project coordinator at the Boston-based restaurant software company Toast, Inc. since January of last year, according to her LinkedIn page.