My Lunch with the Hunger Striker Who Took on Charlie Baker

Professor Nathan Phillips put his stomach on the line to protest a controversial natural gas link. Now, he tells me about taking on the governor and why refusing to eat for two weeks is not a diet he would recommend. 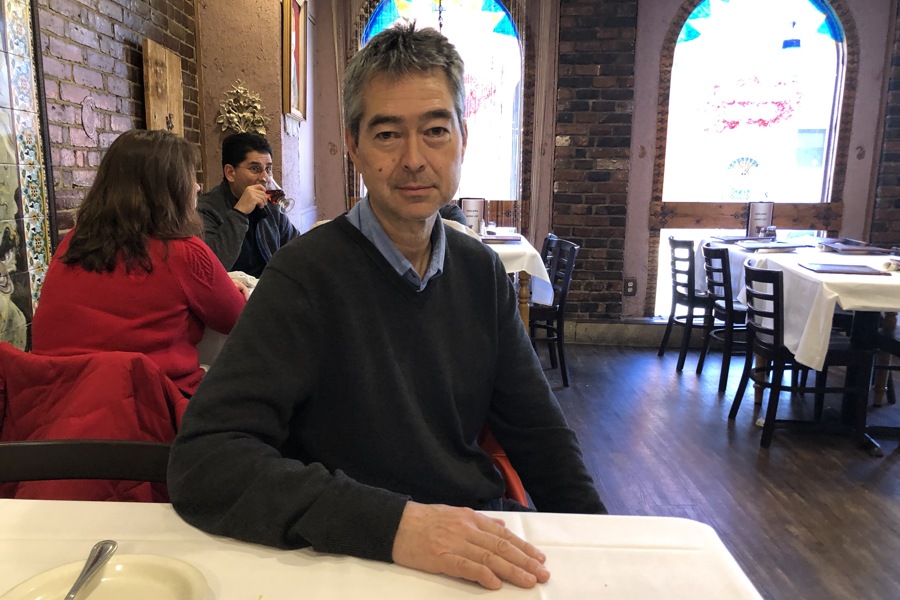 What’s the best way to get Gov. Charlie Baker’s attention? Depending on who you are, it might be by telling the state’s head honcho that you’re not eating until he calls you back. That, at least, was the strategy deployed by Nathan Phillips, the Boston University environmental science professor who made headlines by going on a hunger strike to protest a natural gas compressor station in Weymouth that will provide a link between major pipelines and the Atlantic Ocean. On January 29, the 53-year-old started a very public game of chicken with Baker and other backers of the controversial project, announcing he would consume only tea, vitamins, and salt until the state cleaned up its act at the site.

Two weeks later and 22 pounds lighter, Phillips called off the state’s longest hunger strike in recent memory with a partial victory last week. Of his three demands—to clear contaminated dirt from the site, to screen debris for pollutants before removal, and to install a device that tests air quality in the area—so far the state has only moved to his satisfaction on the air tester, but he sure has gotten a lot of people thinking about a project that many locals had previously dismissed as simply a nuisance in someone else’s backyard.

Two days removed from his protest, Phillips accepted my offer to buy him a meal in Watertown Square, where we dug into golden-colored chicken kabobs—only his second lunch since allowing himself the privilege—and he shared his thoughts on whether we might see more protests just like his, the state of activism in Boston today, and how to bike to work on a very empty stomach without passing out and getting run over.

I’m enjoying this. (He flashes a thumbs up.)

What’s it been like eating again after all this time?

Glorious. I love food. But, I had to be careful. If you just start again without restraint you could seriously damage yourself after coming off an extended fast: It’s called re-eating syndrome. You can get your electrolyte balance all screwed up. There’s an acronym for typically what things you kind of want to start off with slowly: BRAT. Bananas, rice, applesauce, toast.

What was your first meal?

Well I’ll have to admit I cheated on my first meal back. The first thing I had was vegetable bean soup made by a dear friend from Fore River Residents Against the Compressor Station named John Gauley. It’s symbolic because they nourished me in terms of support throughout the duration of my hunger strike, then it was fitting to be nourished physically at the end of it by this wonderful soup.

You live in Newton. Why are you so invested in fighting a compressor station in Weymouth?

If you just hear about the fight against the compressor, it might sound like, “Oh, it’s a NIMBY thing.” But it’s about a much more fundamental injustice on a number of levels. It’s a New England issue, and it’s an international issue. The compressor station is essentially a Panama Canal of gas: a linkage between the two gigantic pipelines. It allows gas from the vast fracking fields of Pennsylvania to make its way to the Atlantic Ocean. That’s why it’s called Atlantic Bridge. So, it’s bigger than Weymouth, but also the community is getting screwed over for geopolitical aims and profits.

You were arrested before the hunger strike, right?

Yes. I was compelled to become sand in the gears, so I blocked an escalator at the Massachusetts Department of Environmental Protection headquarters in Downtown Crossing on Oct. 2. That was the first act of nonviolent civil disobedience related to this Weymouth compressor station.

UPDATE: One arrest has been made at MassDEP Offices in Boston. Dr. Nathan Phillips, a community ally who testified during the AQ hearing, sat in front of DEP’s offices to call on them to #denythepermits.

Join us by signing the pledge to take action at https://t.co/ho3WtGjXAp pic.twitter.com/n2JCsT0R9f

Have you been doing this kind of thing for a long time?

No. I’m a late, late bloomer! I wasn’t politically active in college. Even during my first 10 years at BU, I was very nose to the grindstone. I’m kind of making up for lost time.

There were a couple things. First, in 2012 we published a map of all the gas leaks in Boston and four days after that, Springfield is hit with a gas explosion, causing 18 injuries. Next thing I know I’m thrust into a kind of a spotlight I never, ever thought I would be in. At the same time, I ended up getting involved with fossil fuel divestment at BU as a faculty ally. Both things gave me a kind of the sense of meaning and purpose that made me feel like my science was actually worth doing.

And BU is okay with all this?

You’d have to ask the administration. I don’t expect or seek their support—I actually just want to be left alone. I have to give credit to the central administration of BU, though, because I haven’t heard from any of the higher ups. That also speaks to the protection that tenure confers. If you’re harassing, if you’re bullying or if you’re not showing up to teach your classes, they can fire you. But political speech? Not unless you’re calling for someone to get injured or something like that.

Did you ever get the sense that your students were sizing up how you were hanging in there during the strike? I understand you lost some weight.

Yeah, I lost 22 pounds from start to finish. I’m sure it was noticeable. But the hour before I broke my fast, I chaired an hour and a half university level committee with 35 people from across the university and no one that I observed was looking at me askance, like ‘He looks like he’s ready to drop.’ My body mass index was still in the normal range. I think I was on the upper edge of normal when I started and I was on the kind of a lower part of so-called normal when I finished it.

You had some reserves.

I had a few to give when I started. (Laughs.)

Maybe we won’t recommend this diet plan to most people, though.

That’s actually really important. This has been fraught to do this because food and eating is a highly personal issue. Eating disorders, food scarcity—a lot of people don’t have food security to start with. I always knew I could go back after this is over and have plenty to eat. So I never wanted to be flippant when I talked about it.

You were still biking to work, right? How did you do that and not die?

Well, I was e-biking. I ramped down my strenuous activity, but I was still very active. I needed to replace those electrolytes or it could have and would have been a pretty dangerous thing.

Have you ever trained for a marathon or anything of the sort?

No but I kept using the analogy of running a marathon. I’m two thirds of the way up Heartbreak Hill now, and I can I can see in my mind that finish line and I think I can make it. That’s kind of the internal conversation I was having with myself.

Is it true the first couple days are the hardest, and then you hit your stride?

Yeah. I got past that two- or three-day period, and then it was just flat, flat, flat until I finished the strike. I felt incredibly, astoundingly normal. You know, people say you get clarity of mind when you’re fasting like this, and I do feel like I had that. I felt calm and lucid.

After all this, do you think your protest worked?

I would say yes and no. Yes, in that the story wasn’t getting the attention that it deserved and I got it in the spotlight. But no, in that Baker and the DEP are still not taking this seriously. They frankly kind of barely moved on specific demands I had.

Did you ever hear from Baker or anybody directly connected to him?

I got a direct email response from commissioner of the DEP Martin Suuberg. He emailed me the day after I emailed him telling him that I was on a hunger strike.

It’s a tactic that goes back decades and centuries—Bobby Sands of the IRA, Gandhi, Dick Gregory. But I have started seeing them in the past six months. When I tweeted my intention to do a hunger strike back in October, a guy in Weymouth responded to my tweet claiming he was on hunger strike. There was a young man in the UK hunger struck for 10 days over plans for a new coal mine and he’s 16 years old!

You don’t do this unless you feel desperate, like it’s absolutely necessary. Amazingly, if you’re in a fortunate and privileged enough situation to be able to do it, there’s nothing simpler than doing it. I mean, mental preparation, yes, but it’s removing something from your life. So in terms of simplicity, we all have the power to do it.

After you ended your hunger strike, you said things went pretty well and you felt okay. So why did you stop?

Doctor’s orders. My doctor said like, you know, if you want to be there for your friends and your family, you might not want to go beyond a couple weeks. I didn’t want to just put myself in a situation where I’m becoming a burden on others, or I’m no longer available and able to continue the battle. Because this is going be a long-term thing. I want to be back in the trenches.

Aside from the compressor site, if you could snap your fingers and change something in Boston, what would it be?

Mobility lanes everywhere. I used to call them bike lanes, but there’s scooters, three wheels, motorized scooters for disabled. What I’m talking about is safe options for people to get around that reduce our dependency on cars.

Would you do another hunger strike at some point down the line?

I would. I’m always trying to think of other ways to affect change. I don’t know what the next personal action might be. I’m inspired by Louise Bruyn, who founded Green Newton during the Vietnam War era. She just said, I’m going to walk from Boston to Washington, DC and confront Richard Nixon and tell him to stop the war. I don’t think the war ended because of her actions, but all of these things build on each other.

You said food was better when you started eating again, too? Are you still in that phase?

Yeah, I don’t know if you noticed. I really liked this. (gestures at empty plate) I’ve always loved food and I really enjoyed that meal.