Boston Coronavirus News: Crowds on the MBTA, the Construction Boom Comes to a Screeching Halt

The latest on the COVID-19 crisis. 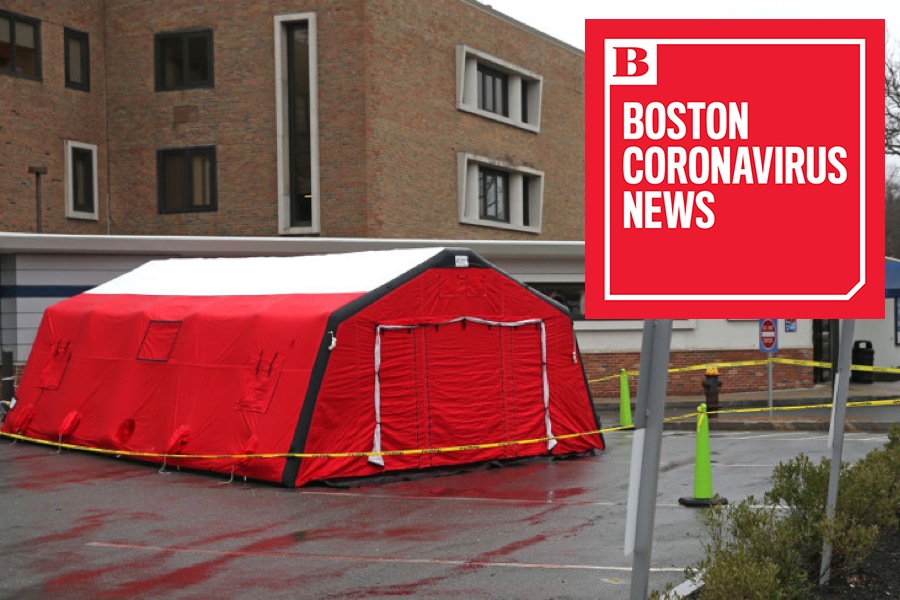 BOSTON, MA – MARCH 17: An emergency tent is set up at the Carney Hospital in Boston’s Dorchester for coronavirus pandemic use on March 17, 2020. (Photo by David L. Ryan/The Boston Globe via Getty Images)

Presumptive and Confirmed Cases as of March 17:

The MBTA Reacted to the Coronavirus by…. Forcing People to Crowd into Fewer Trains

In response to the crisis and the dramatic reduction in the number of people heading to work, the MBTA announced this week that it would scale back operations and run trains more infrequently. So what did commuters see Tuesday morning? From the looks of it, bigger crowds than they’ve seen in days.

The MBTA is operating on a reduced schedule starting today. But riders are sharing pictures of their crowded commute during a time when we should be social distancing. #7News pic.twitter.com/MG25oxdG2z

We’re in a state of emergency in Boston and get we have less trains instead of more. Thus everyone’s tighter and closer togther…. corona time @MBTA pic.twitter.com/7dc8gNWqAK

Construction Workers Are Off the Job

Workers are saying goodbye, packing up their tools, and heading home this week as the building boom in Boston has suddenly ground to a halt. Mayor Marty Walsh announced on Monday that the city would put an end construction for now, a move the former trade union man said would put thousands of employees who had been at work at job sites around the city out of work.

Is It a Lockdown if There’s Nowhere to Go?

Gov. Charlie Baker has been poo-pooing the idea, spread as the online rumor mill keeps churning, that the state is considering a strict shelter-in-place order like those seen in China, Italy, and Spain—and now the Bay Area. But a de facto lockdown has already arrived. Restaurants are scrambling to adapt to the new delivery-only paradigm that begins Tuesday, offering deals to entice customers and keep the lights on. Retailers and gyms are closing their doors (and offering online classes instead), government buildings like the State House are barring the public, and resources like public libraries and community centers are going dark. The message repeated over and over these days is that everyone who can ought to stay indoors for as long as possible. Mandatory lockdown or not, it’s easy to keep people at home if there’s nowhere to go.

In one of the few perks of this unfolding crisis, Boston Public Libraries have announced they’re suspending late fees through May 1, and automatically renewing books for 15 weeks. You’re welcome!

Boston Public School students headed to class on Monday to collect belongings and coordinate with teachers before heading home for at least the next several weeks, beginning today. That means a whole lot of parents are suddenly at home with their kids, and in case any of them could use some advice right about now, we’ve got you covered with our Ultimate Parents’ Lockdown Guide.

Hospitals Are Bracing for Impact

As health workers prepare for the sick to begin arriving in droves, a few major moves have been made in the local healthcare industry. The Carney Hospital in Dorchester has announced it will make itself a COVID-19 treatment center, the first hospital in the nation to do so. Those with symptoms are advised to call a doctor (read our guide on what to do here), and may be funneled to one of the newly erected drive-up testing sites around the state, including three in Boston. The threat posed to those who work in healthcare has also become clear: So far four Massachusetts health care providers have tested positive for the virus, including one worker each at Mass. General and Mass. Eye and Ear, and two at Brigham and Women’s.

So Are Grocery Stores

As people are still flocking to them in unprecedented numbers, some grocery stores have adopted new policies and hours. Stop & Shop announced that beginning Thursday it will open its doors exclusively to people over the age of 60 from 6-7:30 a.m.

More than ever, it’s important we come together as a community to serve those in need, including advocating for our seniors. Beginning 3/19, all Stop & Shop stores will open earlier from 6:00AM-7:30AM daily to serve customers who are age 60 and over only. https://t.co/qmZhPUnlpJ

All the panic-induced buying this week has also shown which products are deemed unfit for our shelves, even now.

And Animal Hospitals, Too

The MSPCA-Angell Medical Center will be staying open as the outbreak unfolds, but has taken new efforts to protect its staff. The MSPCA will also remain open for those who need to surrender animals in an emergency, and will continue facilitating pet adoptions, as doing so will help clear space for potential animals in need.

For the owners of defunct businesses, and the many who are out of work and struggling right now, donors and government agencies are coalescing around efforts to help. On Monday, Mayor Walsh announced the formation of a Boston Resiliency Fund, contributions to which will support feeding needy families, providing technology to help BPS students learn remotely, and help first responders and healthcare workers . The goal is to raise $20 million. At the state level, the governor’s office has announced a program that will see the distribution of $10 million in zero-interest loans of up to $75,000 to help small business owners weather the storm.

The Cambridge company Biogen, now infamous for a meeting it held in Boston at which the virus is now believed to have spread to at least 100 people, is pledging $10 million in donations to nonprofits responding to the crisis, and will also donate equipment to aid in the recovery.

State lawmakers are also at work on three bills aimed at helping people pushed out of work by the outbreak.

Even Mitt Romney, evidently, has a plan for this: He’s proposing an Andrew Yang-style plan that would see $1,000 a month in universal basic income payments to every American as a way to prop up the economy and put cash in people’s pockets.

The Celtics Are Stepping Up

Fans are out of luck now that sports are a thing of the past, but the people who keep sports venues functioning are also in deep trouble. As some venue owners have failed to rise to this occasion, players have volunteered to pay support staff while they’re out of work. Now the Celtics are publicly committing to paying its behind-the-scenes part-time workers during the shutdown, among them locker room attendants and ball boys.

If There’s Any Non-COVID-Related Story That Can Break Through Right Now, This Is It

Tom Brady’s announcement that his career in the NFL will not continue in New England went off like a neutron bomb in Boston media this morning, proof that our obsession with all things GOAT will take precedence even amid global catastrophe.