Boston’s Gala Season That Never Was

Why do we need nonstop parties every spring for Boston’s nonprofits? We’re all about to find out. 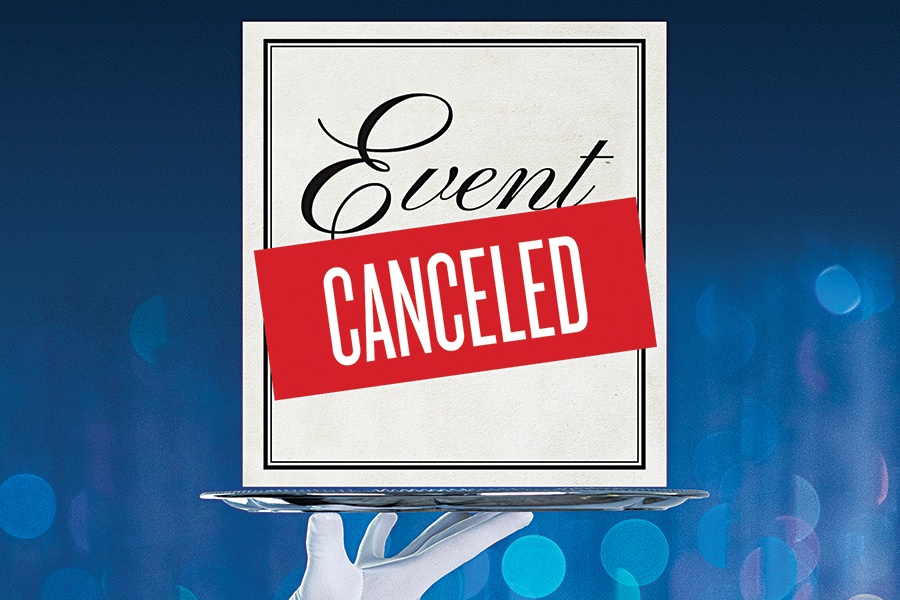 For  30 years, I’ve covered Boston’s social scene, writing about the black-tie galas, luncheons, dinner dances, fashion shows, and fundraisers that make up what I’ve always facetiously called the “Free Shrimp Circuit.” To paraphrase the late Reverend Professor Peter Gomes, who was minister of Harvard’s Memorial Church: People around here can’t have a good time unless they somehow feel they’re improving the world. And it’s true. The city’s social life revolves around charitable events, and our most prominent citizens are our leading philanthropists, a fact that’s always made me proud to be a Bostonian.

Conservatively, I would estimate that I’ve attended upward of  3,000 such soirees. By the end of “gala season”—which reaches a crescendo in mid-May—party fatigue has set in. My resolve not to drink on school nights has gone the way of a hooker’s virginity, and I’m fighting back tears as I shrug into a tux (on a Monday night, no less!) to sit in a hotel ballroom and eat another catered filet mignon while listening to a lot of well-intentioned people preaching to the converted. (Email me directly for a list of otherwise delightful Bostonians who should never, under any circumstances, be given a microphone.) That, of course, was before COVID-19 short-circuited the social circuit and pulled the rug out from under me. I’d always approached May with a sigh of anticipatory exhaustion. Now, I long for breathless speeches by gala cochairs and honorees, and three parties a night for the next four weeks sounds like bliss. So what happens when the most social man in Boston is forced to practice social distancing? I’m still in the process of finding out.

Before anyone sanctimoniously asks, Who cares if a bunch of fancy-pants parties get canceled when people are sick and dying? keep in mind that these events are, in no small part, what fund nonprofits, including the hospitals where coronavirus patients are being treated. By way of illustration: Community Servings, which delivers nutritious, medically tailored meals to the critically ill, was forced to scrap its annual LifeSavor gala on May 21. Last year, the event raised close to $1 million, more than 10 percent of the institution’s annual operating budget. The Green and White Ball to benefit Friends of the Public Garden, meanwhile, raises what amounts to 20 percent of that organization’s budget as well. In short, these parties are important. Vitally so.

I might have read a passing reference to COVID-19 when it initially reared its ugly head in Wuhan back in December, but if I did, I was undoubtedly nursing a holiday hangover and paid scant attention. I do remember, vividly, when the virus appeared on my radar later in February. I was having breakfast at the Park Hyatt Tokyo when I saw the headline that dominated the front page of the Japan Times: “Ten Passengers on Quarantined Cruise Ship Test Positive for Coronavirus.” I was there to do a travel story, visiting friends before flying north to go skiing in Hokkaido. The quarantined Diamond Princess continued to be the lead story for the entire 10 days I was in the country, but I was unbothered by it. After all, by the time I was on the slopes, I was almost 700 miles north of Yokohama, where the mega-ship was docked. How could coronavirus affect my life in any tangible way? When I got home, my husband, Sam, was in Paris on business, and when he returned, we left for Ireland with a large group of friends for three days of debauchery culminating in the County Kildare Hunt Ball.

The night after we returned to Boston, my social schedule quickly picked back up. On February 28, I drove to Ipswich for the Snow Ball, a fundraiser for the Trustees of Reservations held at Castle Hill, on the Crane Estate. There was a smattering of talk about the flu that was ravaging China, but much of the conversation centered around children, dogs, and horses (not necessarily in that order). On March 3, I modeled in a charity fashion show at the Mandarin Oriental to benefit Dress for Success. Several people expressed mild concern, but there were still group photos and unrestrained physical contact. At JCC Greater Boston’s big fundraiser the following evening, however, it was all air kisses and elbow bumps instead of handshakes and hugs. A friend joked that being a wildly neurotic hypochondriac and rabid germophobe was finally paying off for her, while another group discussed canceling plans for spring break in Palm Beach and on St. Barts, one woman expressing her relief at getting out of having to spend a week with her in-laws. Sam and I still went to the symphony that Thursday, but by the weekend, “abundance of caution” had become the most overused phrase in the English language, and we agreed we wouldn’t be attending any more large public gatherings.

We still felt comfortable enough to go to a small dinner party in Brookline on March 12 to celebrate a dear friend’s 50th birthday, but despite the bonhomie and the black-jack dealer his wife had hired as entertainment, there was a palpable edge to the evening. One guest looked at me and said, sotto voce, “I think this is going to get really bad.” At dinner, Philipp Knuepfer, the general manager of the Mandarin Oriental, mentioned that due to school closings, he was converting the newly renovated hotel ballroom—the same one I’d modeled in nine days before—into a daycare center for his employees’ kids. The very next day, he sent out an announcement explaining that to keep staff employed and avoid any layoffs, the hotel would be offering in-home housekeeping, catering, and spa services to neighborhood residents.

By Friday, as travel restrictions were starting to go into effect, the cancellations, which had begun as a trickle, grew into a torrent. With nowhere to go and no desire to go anywhere, Sam and I self-quarantined, starting perhaps later than we should have, but better late than never. We went from blithely socializing to obsessively washing our hands and using sanitizer, wearing nitrile gloves at the grocery store, sterilizing every doorknob and light switch in the house, and disinfecting everything that came through the front door. In a matter of weeks, life had changed from happy-go-lucky to better-safe-than-sorry, from freedom to lockdown.

As I write this, we’re 17 days into isolation and resigned to the grim idea that restrictions won’t be over anytime soon. I look at my formerly jam-packed calendar wistfully and scratch my head; it feels like I’ve been teleported to another planet.

I don’t expect any sympathy for the fact that I can’t don cocktail attire and go out every night, but the number of fundraisers that have been called off, not to mention whole seasons for performing-arts organizations, is staggering, and it’s sure to take a devastating toll on institutions’ (already tenuous) bottom lines. “We’re still in the process of assessing the financial losses associated with the recent cancellations,” says Boston Symphony Orchestra president and CEO Mark Volpe, who had to scrap the rest of his season, “but we do know that they’ll be in the seven figures.”

The nonprofits themselves, of course, aren’t the only ones affected by the crisis. Holly Safford, owner of the Catered Affair, has seen her gala and wedding business completely dry up since March. “Having experienced what I thought was the end of everything after 9/11, when 80 events canceled in the three days following the towers coming down, we rebuilt, albeit slowly, as no one had much enthusiasm for any type of gathering. 2008 was tough, too, and we had many, many clients who lost fortunes during the Madoff debacle,” she says. This time feels different. As a result of COVID-19, Safford has had to lay off all 350 of her employees, and the future doesn’t look any more certain. “This pandemic is far worse than anything I’ve experienced in my 40-year career,” she says. “The floor has collapsed beneath us.”

With so many of our friends out of a job, Sam and I are both well aware of how fortunate we are to have work (not to mention health insurance and a roof over our heads). Still, living life within four walls has taken some getting used to for both of us. Group text chats have helped stave off cabin fever, with plenty of gallows humor, tasteless jokes, GIFs, memes, and videos. Family and friends from Switzerland, Brazil, London, and Morocco have been in touch, and I’ve “attended” online cocktail parties from Cape Town to Cartagena. (As Sam sagely pointed out last Sunday, “Virtual cocktail parties can result in very real hangovers.”) While I used to cringe at the prospect of FaceTime and WhatsApp video calls, I now crave them. Who knew the world’s biggest Luddite would be clinging to technology like a life raft?

Similarly, our arts organizations are adapting to the new world order. More than 14,000 people, for example, have streamed archival recordings through BSO at Home, and Boston Ballet artistic director Mikko Nissinen is likewise counting on the Internet to see the organization through. “Until we can be on stage again, Boston Ballet is utilizing social media to share our art,” he says.

This pivot to digital platforms while theaters remain dark and large gatherings remain dangerous is also holding out a lifeline to some of the businesses that power Boston’s biggest social events. Bobby Perino, who runs Max Ultimate Food, had to lay off 400 hourly employees (and some salaried), but he’s kept the company running at a simmer by offering online home delivery, and he’s cautiously optimistic about its prospects. Even event planners have found a way to keep the lights (somewhat) on. “We’re creating lots of different virtual experiences for our nonprofits,” Bryan Rafanelli, owner of Rafanelli Events, tells me. “No-Show Galas, and Galas on the Go. I have a client who recently hosted a virtual disco dance party. The guests all agreed on a playlist and then went live on Zoom and danced their butts off for 20 minutes.”

The lasting effects of this generation-defining crisis remain unclear. But as Simone Winston, wife of Winston Flowers co-owner Ted Winston and herself a major player in the social swirl, puts it: “Right now, I can’t foresee a day in the near future when I’ll feel compelled or comfortable to be in a space with hundreds of other people, in close proximity, celebrating in any ostentatious manner, in the name of philanthropy.” That’s what everyone said after 9/11, too, but eventually things returned to normal, perhaps because, like those monkeys with the Clorox bottles in that documentary we all had to watch in middle school, we primates wither without physical contact, and smartphones just can’t cut it.

As I’m writing, current models project a death toll of up to 240,000 in the U.S., and given how quickly things went from hunky-dory to this, I can’t begin to imagine what things will look like six or eight weeks from now, when you’re reading this. I pray it won’t resemble a Hieronymus Bosch painting and that most of us will get through it, and that, in time, social life will return to this city.

If, and when, that happens, one thing’s for damn sure: Like Ebenezer Scrooge on Christmas morning, I’ll be giddy as a schoolboy when I finally get to don my tuxedo (assuming it still fits), and I’ll weep uncontrollable tears of joy as I walk into that hotel ballroom and finally, actually get to kiss a friend on the cheek again.