Thousands of protesters took part in a peaceful protest Sunday—but the evening took a chaotic turn as night fell. 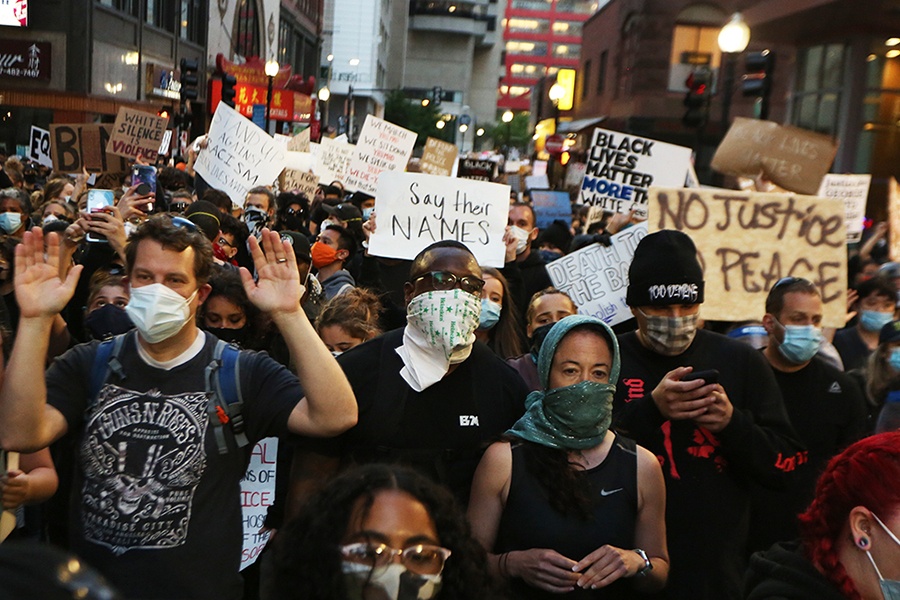 Sunday evening, thousands of protesters marched peacefully from Roxbury’s Nubian Square to the State House, in solidarity with scores of other protests across the country after the death of George Floyd one week ago.

Floyd, a black man, died last week in Minneapolis after Derek Chauvin, a white police officer, knelt on his neck for over seven minutes, as three fellow officers looked on. Chauvin has since been charged with manslaughter and third degree murder.

Despite the ongoing COVID-19 pandemic, protesters donned masks and marched to call for justice, chanting “black lives matter” and “I can’t breathe.” 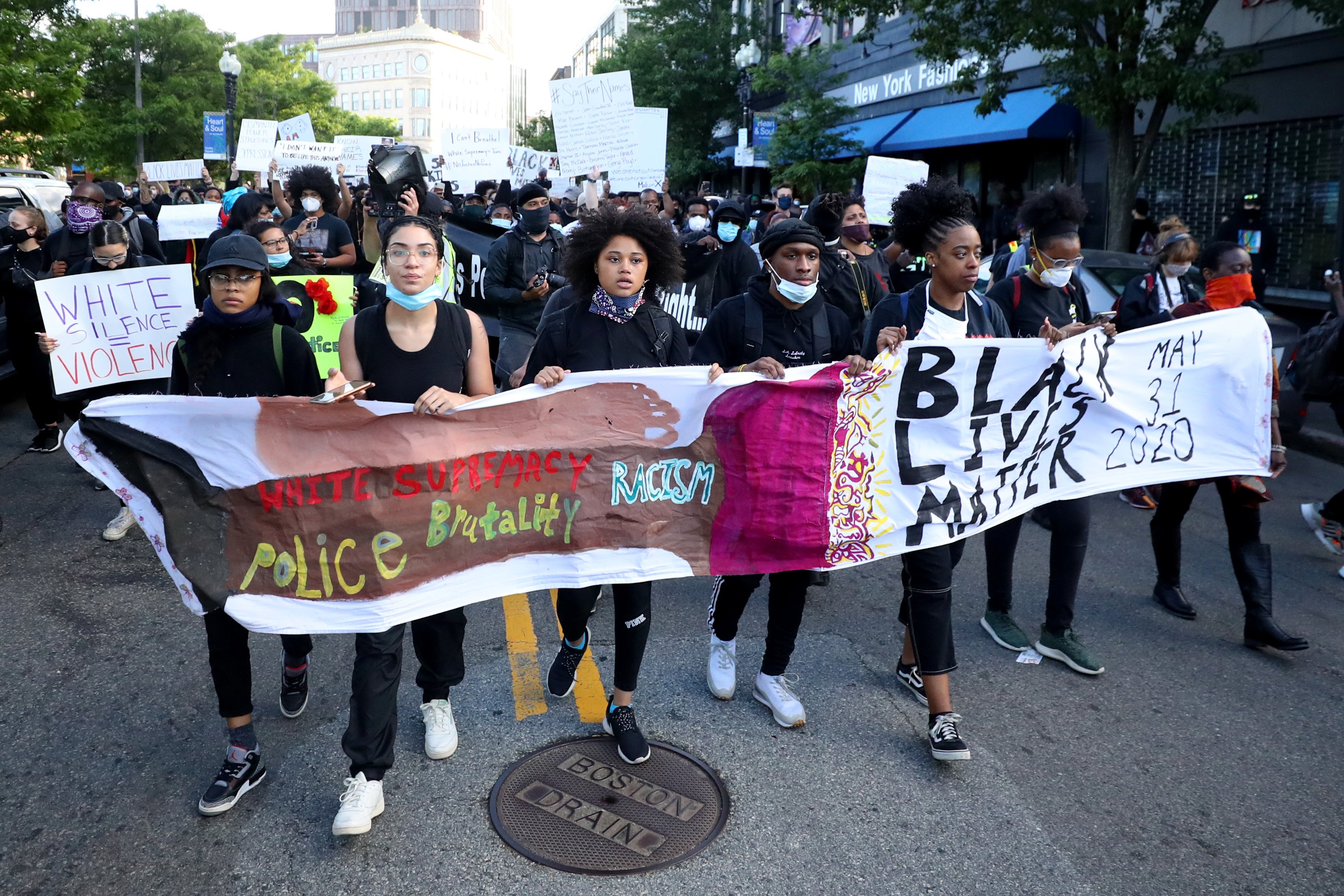 This is a mfn movement. Beyond a moment. #BostonProtests #protests2020 #Boston pic.twitter.com/Ok4LW2UfPS 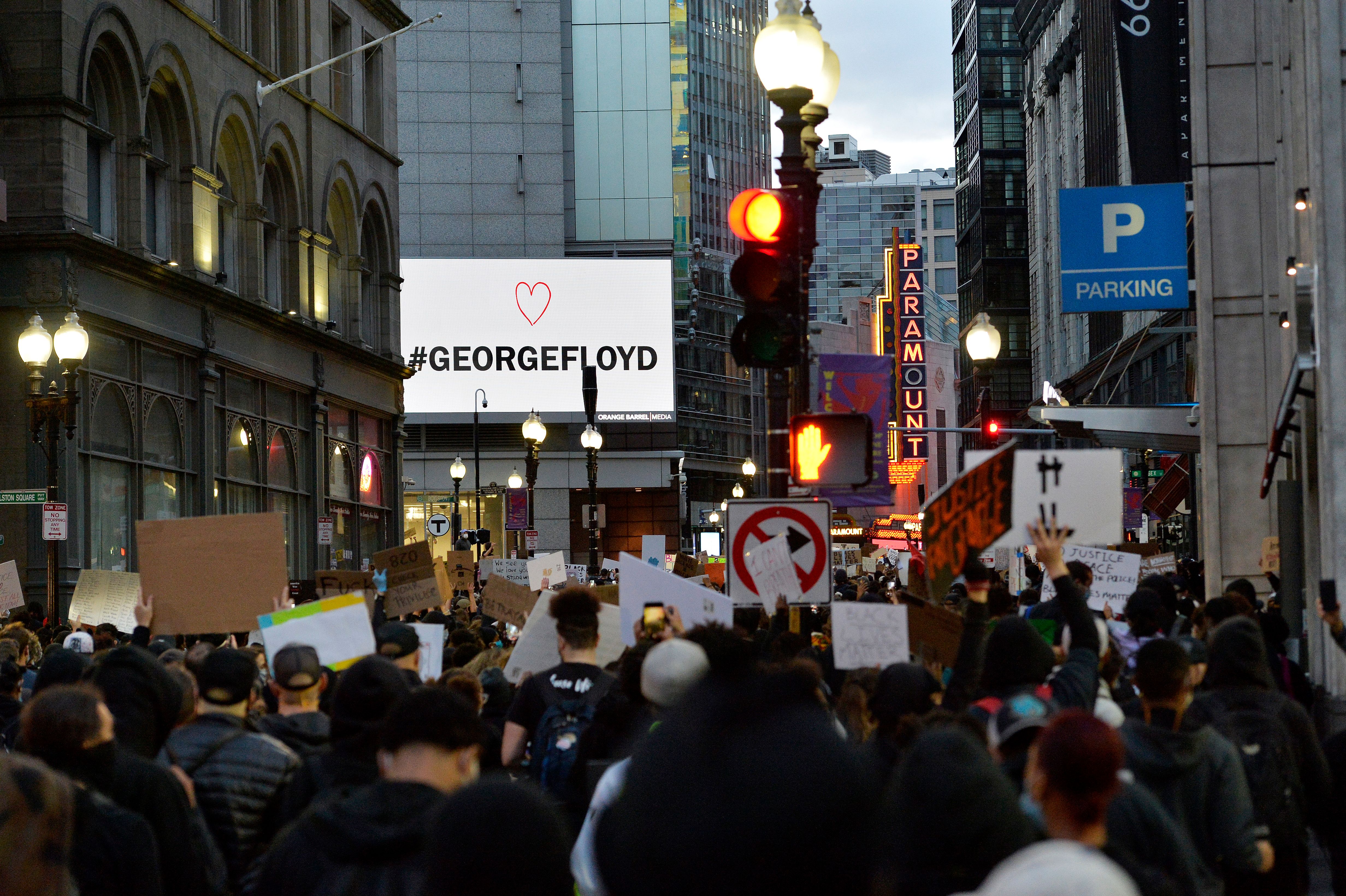 Protesters hold up signs as they march downtown. (Photo by Joseph Prezioso / AFP) (Photo by JOSEPH PREZIOSO/AFP via Getty Images)

As the sea of protesters passed Tufts Medical on the way to downtown, the crowd clapped and cheered in tribute to the healthcare workers battling the COVID-19 crisis. Hospital staff, some out on the sidewalk and others at the windows of the building, applauded the marchers in return.

The route passed underneath @TuftsMedical. Medical staff lined the windows and cheered the crowd on, and the crowd responded in kind.

We had each other’s back. Solidarity. pic.twitter.com/LFBjRYsMm5

At the State House, the peaceful demonstration, organized by a group called Black Boston, continued until about 8:30 p.m.

Out of thousands, I only saw one person without a mask at the #BlackLivesMatter peaceful protest this evening, & he seemed lost. Also, no damage done (that I saw), and it wasn’t anywhere near as rowdy as some of the celebration parades that have rolled through #Boston. pic.twitter.com/XqbF2fXrzH

I was proud to stand among these peaceful protesters + galvanizing speakers: “DIVERSE + MORE DIVERSE + EVEN MORE DIVERSE…” one organizer said of the growth of the protests, including African-American, Asian-American, White, Indigenous, + Latinx participants. #bostonprotest pic.twitter.com/5ztJDFPglu

Celtics Enes Kanter, Marcus Smart, and Vincent Poirier were sighted among the crowd.

A message from Marcus Smart on tonight’s peaceful protest in Boston:

As night fell, protesters raised their phone flashlights in the air and held a moment of silence.

Beautiful moment of respect in Boston for George Floyd’s life but bet you won’t see this and the peaceful protests we had for hours before all hell broke loose. #bostonprotests pic.twitter.com/DRWwaUIppq

Boston peacefully protesting by raising their phone lights in silence for those who had died from police brutality. I’m so proud to be a Bostonian #BLACK_LIVES_MATTER #GeorgeFloydProtests #BostonStrong #BlackLivesMatter pic.twitter.com/4qkyJd11Jz

As the organized protest came to a close and the crowd began to leave, however, the night quickly took a turn. Some protesters began throwing water bottles at police as tear gas was dispersed over the remaining crowd. Several protesters who were on the scene noted that the police presence expanded quickly, and that many in the crowd felt trapped by police barriers and by the fact that the MBTA unexpectedly closed many downtown stops.

It seemed like the police were taking the shots on the chin, but within minutes it was like a war zone. There were a bunch of explosions and screams that sounded just like the fireworks celebration just earlier. But then a tear gas/smoke bomb canister landed right in front of me. pic.twitter.com/gLo62duy6B

Some kids started fronting with the BPD. Young, black and brown and white, not black bloc or #antifas. I didn’t see anything thrown but that doesn’t mean there wasn’t. That said, @bostonpolice are trained professionals. What peace officer wants to fight KIDS? @bostonpolice is who

BPD deployed tear gas. Reinforcements from both sides started arriving. I retreated down Tremont, onto Bromfield. A police cruiser was pushed back before a handful of cops rushed in. They were badly outnumbered and didn’t know what to do.

3/x I saw cops using tear gas, pepper spray and rubber bullets to keep people at bay. People were now rioting by throwing bottles of water, rocks, and pretty much any object they could find in the direction of the police.

The situation quickly escalated—people began looting stores, breaking windows, setting off explosives, and getting into altercations with the police.

Downtown is quiet right now. Men’s Wearhouse has been looted. Guys are trying on menswear across the street. pic.twitter.com/wZcoMBh9Is

A police car is on fire right outside Beantoen Pub pic.twitter.com/JjEOHQZopB

This morning, cleanup crews have deployed across the city to sweep the streets and scrub away graffiti. As of 3 a.m., the Boston Police Department confirmed that 7 injured police officers were transported to hospitals, 21 police cruisers sustained damage, and about 40 people were arrested over the course of the evening.