In the Endorsement Battle with Joe Kennedy, Ed Markey Is Winning

A guide to who's with whom in the closely watched U.S. Senate race. 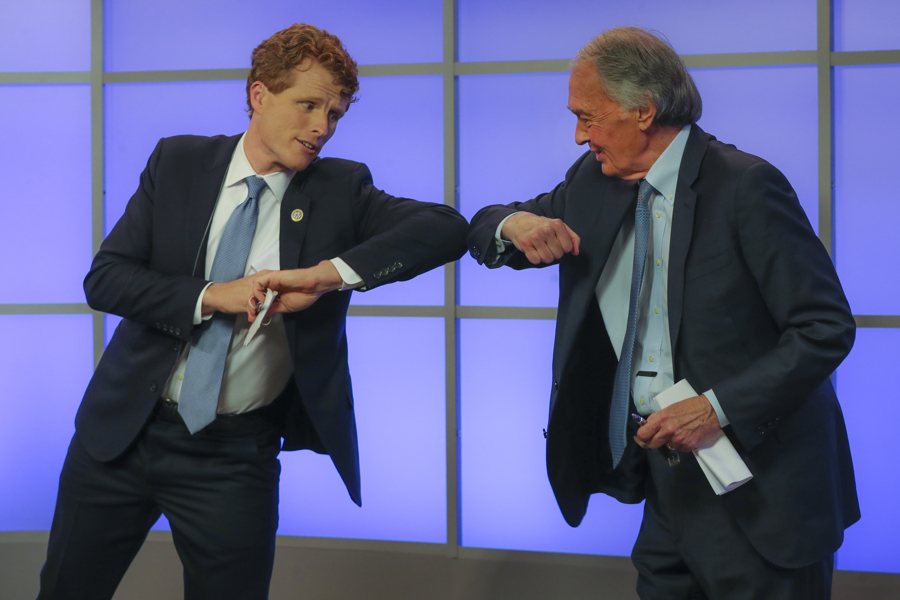 Per tradition over here at Boston, the usual disclaimer: Endorsements tell only part of the story in a campaign, but they do show where allegiances lie, and help candidates define themselves in concrete terms by the company they keep. In the particularly heated race between Ed Markey and Joe Kennedy III for Markey’s Senate seat, endorsements have become especially valuable, and controversial.

For Markey, earning support from the likes of Elizabeth Warren helps him identify himself as the more progressive candidate in the contest, while emphasizing his ties to 30-year-old Rep. Alexandria Ocasio-Cortez and co-authorship of the Green New Deal helps deflate the pitch from Kennedy that the incumbent is too old and entrenched to represent the interests of young voters.

Kennedy, meanwhile, has some fairly prominent colleagues in Congress along for the primary ride, most notably John Lewis, the late civil rights icon and congressman, and Rep. Joaquin Castro, chair of the Congressional Hispanic Caucus.

For what it’s worth, Reps. Ayanna Pressley and Seth Moulton, who each won their seats by challenging incumbents, have both said they will not be endorsing in the primary, which will be held on Sept. 1, with mail-in ballots in the works for those who don’t want to vote in person.

Some of the most contentious moments of the campaign so far have revolved around endorsements, in ways that have tended to put Kennedy on the defensive. Kennedy announced, then abruptly canceled, a virtual campaign event featuring Broadway stars after the celebrities pulled out of the fundraiser under pressure from Markey stans online (in response, Kennedy’s campaign fired off a testy statement condemning what it called a coordinated “cyber-bullying” campaign fueling the fracas). His team also lashed out at the Boston Globe after its editorial board endorsed Markey this week, attempting a rhetorical judo move by dismissing the paper as serving “disproportionately white, well-off, well-educated readers” and framing its backing of Markey as support for “the status quo.”

In August, the race saw yet another headline-grabbing endorsement: A late-coming show of support for Kennedy from House Speaker Nancy Pelosi, who made her announcement via video August 20, with just under two weeks to go before the Sept. 1 primary. Markey responded in notably gracious fashion, both congratulating his opponent and praising his high-profile backer in a statement.

In terms of sheer volume of support from powerful allies, the advantage clearly goes to Markey. How much that will matter in the end is unclear, but it’s possible it could tip a very tight race in his favor. Polls initially showed Kennedy with a slight lead, but now show Markey inching ahead in a very tight race. Twin forces that have historically proved powerful in Massachusetts politics are also at play: Markey is an incumbent, and Kennedy is a Kennedy. But in a race that’s all about defining who these men are beyond those two factors, here is the state of play for endorsements:

Other members of the MA Delegation

My friend @EdMarkey is one of the most respected voices for progressive change in all of Washington. I am so proud to endorse him for re-election.

Head over to https://t.co/eB5VNlMqOU and get involved with his campaign. Please help send Ed back to the U.S. Senate. https://t.co/UUdMmd84wX

I am very grateful to be endorsed by the @BostonGlobe. https://t.co/qzFb3EVLlS

I’m running on my record of delivering for people and communities everywhere in Massachusetts. That record has earned our movement the support of some of the most passionate leaders in our state and I am honored to have them fighting alongside us. pic.twitter.com/VFUtf9ViJ6

In @EdMarkey, MA has a Senator on the leading edge of the climate fight and technological innovation. Along w/ @ewarren he has set a new standard for Senators being champions for our local communities. I will be voting enthusiastically for Ed Markey.https://t.co/is79YEueSz

This seems like a good time to endorse Ed Markey, Green New Deal champion, in his reelection campaign. https://t.co/Xxs6qRsb1S

Boston City Councilor @KenzieBok and I stand together in the fight for transportation and housing justice. We share a common goal of making our communities equitable, safe, and sustainable and I am grateful to have her endorsement in this election. pic.twitter.com/4ZqUKlrlu0

Michael and Kitty Dukakis are the embodiment of the bold, progressive values that have made the Democratic Party what it is today. I could not be more grateful for their support. pic.twitter.com/gg3dBbdTKn

Carole King makes a video for Ed Markey, says “you’ll have a friend in the Senate” http://t.co/QfiCTdhoLT

We must put our most vulnerable communities first as we address this pandemic and the impacts it will have on our country. No one can be left behind. Thank you @Janefonda for having me on the first virtual @FireDrillFriday. pic.twitter.com/jZZrBC2lHm

“We don’t always need to elect a new Democrat. We have some great Democrats who are currently serving our nation and one of them is Ed Markey.” – Hal Ginsberg, Our Revolution Organizer@OurRevolutionMD @ourrevpdx@SenMarkey #OrganizeToWin https://t.co/G5p1hxlI36

We have never endorsed you @joekennedy.

Also, the majority of our endorsement slate is filled with challengers, not incumbents.

Young people have spoken, and we want @EdMarkey in the Senate, not you. #MASenpic.twitter.com/S2o1jfjFi8

I am so grateful to have @GloriaSteinem‘s support. Her activism and leadership helped transform our country into a more equitable place and I am tremendously thankful to have her as a partner as we continue this fight. pic.twitter.com/QsMh7QCHaL

I am truly honored to receive the endorsement of @KenBurns, a brilliant, thoughtful documentarian and progressive changemaker. pic.twitter.com/hRrPoIK9p3

MoveOn members have voted overwhelmingly to endorse Sen. Ed Markey (@EdMarkey) for re-election to the US Senate! #MoveOnEndorsed pic.twitter.com/5LtCh7V4dw

Today, DFA is endorsing @EdMarkey in the #MASen primary.

Sen. Markey was born into a working-class family that taught him real leaders can’t be identified by the last name they were born with, but by the people they fight for, the stands they take, & the battles they wage.(1/2) pic.twitter.com/rqa7RO9cQS

Vice President @AlGore is a foundational leader in the climate movement. I am very grateful to have his support in this election. Together, we will pass a Green New Deal, dismantle the structures of environmental racism, create millions of union jobs, and save our planet. pic.twitter.com/nVgCeLZymn

Rep John Lewis on Joe Kennedy: “He is a clear voice for justice and dignity in our rising generation of public servants. I am proud to endorse his run for the U.S. Senate.”https://t.co/Lcx9sRfNAk #MASenateDebate

Nancy Pelosi is a force. No one has done more to take on Donald Trump and build our Party’s future. Proud and humbled to have her with me in this fight. pic.twitter.com/xyMudb1ROB

“Joe Kennedy fights for the rights and dignity of everyone, and he’s dedicated to building a more inclusive country where everyone can achieve their dreams,” Castro said. “On multiple occasions, Joe took action and came to Texas on our southern border to see firsthand the faces of those devastated by the Trump administration’s cruel and inhumane immigration policies. Joe is the kind of strong leader we need in the U.S. Senate.”

Kyrsten Sinema says she would back Kennedy in Senate race against Markey https://t.co/Ah4mn7ceIC pic.twitter.com/BSliPj0ciO

IBEW Local 103, which was one of the early unions in candidate Ayanna Pressley’s camp is getting behind Congressman Joe Kennedy, as are the Teamsters. https://t.co/4VlhsM066G

Firefighters are working 48-hour shifts, and putting their lives at risk each and every time they respond to a call. All while lacking essential equipment.

Grateful for Mayor Fuller’s endorsement and her steadfast commitment to Newton, my hometown. It’s been an honor to work with you these past eight years, and I look forward to continuing our partnership in the Senate. pic.twitter.com/o5xvQH1rne

Honored to be endorsed by Sheriff Steve Tompkins of Suffolk County. His leadership on criminal justice reform & the fight against the opioid crisis is crucial to our community & commonwealth. #mapoli

Spent the day with Rep. Chynah Tyler in Nubian Square visiting local businesses and walking around the community….

He’s been “woke” since I met him in the @PeaceCorps so many years ago. @joekennedy went above & beyond the call of duty to help the poorest in the region. No cameras. No media. No one watching. Just a tremendous desire to serve the underserved.https://t.co/Q37gduKkcn

I’m with @joekennedy because of his dedication to his constituents, his empathy, his intellect, his compassion, and his commitment. That’s why I’m #TeamKennedy and will be casting my vote for him on September 1.

@ the rally last night, I impressed upon young peaceful protestors how very vital their vote is @ every level & how normal is not good enough, we MUST do better. That is why I am supporting @joekennedy for Senate. We need a Senator who shows up, cares, listens & acts. #mapoli pic.twitter.com/TNe5Zf27X2

“I think oftentimes we have people advocate for us but they never want to talk to us,” said Monica Cannon-Grant. “They talk about our community but they don’t come visit and actually get to know the people and see what the real disparities are. One of the things I appreciated about Joe was that he was honest about the parts he was unaware about, and he was willing and open to learn. He was willing to listen to the people who are actually doing the work. With Joe, one of the things I appreciated the most was that he went on a tour of just listening. It was a listening tour.”

It might not be the endorsement @joekennedy is looking for, but the former GOP governor of Massachusetts has some thoughts:

“I’m for Kennedy,” Bill Weld told Washington Post reporters today. “I’ve known him since the day he was born.”

We need social and economic justice for all.

Join @DoloresHuerta and I for a conversation today at 4pm.https://t.co/l9IC5vkJv9