Some Real Snow Is Coming to Boston on Wednesday

The latest on the storm that's slated to bring a whole bunch of fluffy snow across the state. 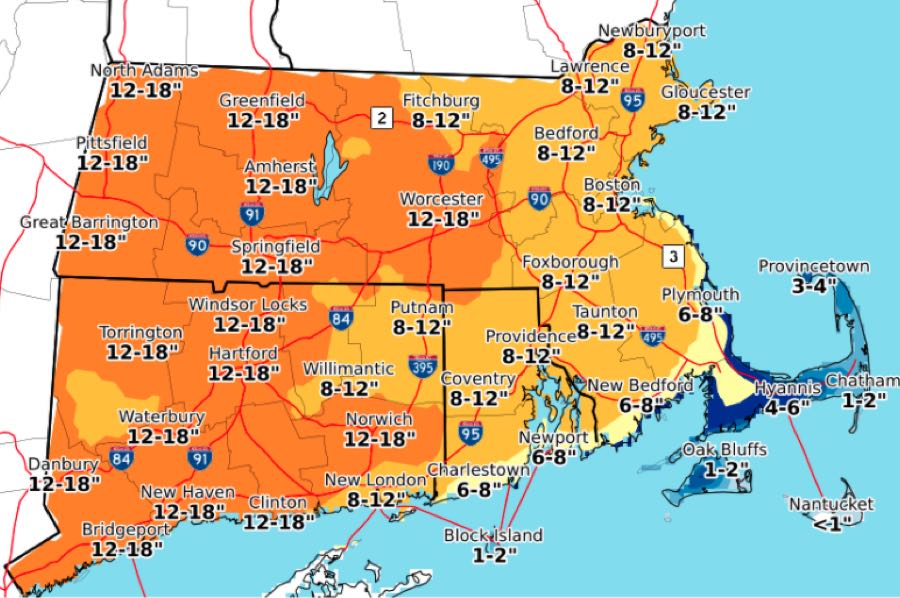 Screenshot via NWS Boston from December 16.

It’s really happening: As we lurch into winter, the Boston area is bracing for its first good snow storm of the season on Wednesday, which is forecast to bring ice-cold temperatures and a whole bunch of fluffy white stuff to the region into Thursday

We’ve had snow here twice already, in October and via a nor’easter earlier this month. But those flurries came at or near the freezing point, meaning we had a whole lot of the dreaded “wintry mix.” This time, according to forecasters, it’s real snow. The kind you write songs about.

As of midday on Wednesday, the National Weather Service has issued a winter storm warning for Southern New England, encompassing most of the Commonwealth—excluding Nantucket and Martha’s Vineyard—and they’re cautioning us to take precautions as the snow blows in, beginning around 8 p.m. in the Boston area. The warning is in effect through 1 p.m on Thursday.

[5:30 AM] Snow arrives from southwest to northeast during the early evening. Road conditions will deteriorate quickly due to snowfall rates 1-2″ per hour – travel with extreme caution. Snow totals have been adjusted upward in across central/western Massachusetts #MAwx #CTwx #RIwx pic.twitter.com/Dg30GzNE2c

“It should be pretty dry snow since we’re going to be getting some pretty cold air, almost like mid-winter temperatures,” Bill Simpson, NWS meteorologist. “So certainly a plowable event. How much [snowfall] exactly is still kind of up in the air.”

Neighbors to the south and west could see even more, with snow total projections as high as 18 inches in Western Mass and much of Connecticut.

Here’s timing of the onset of snow tonight (ignore rain in CT at start – that will be snow).

As for the possibility of a blizzard, Simpson says it’s likely we’ll see something like blizzard-like conditions given the potential for high winds and low visibility. Whether the storm might actually cross the official threshold—which, as a reminder, requires three hours of 35 mile per hour winds, plus a quarter-mile-or-less of visibility—remains to be seen.

In addition to the heavy snowfall there will be strong wind gusts with the approaching storm, particularly along the coast (35-45 mph) and the Cape and Islands (50-60 mph). This may result in isolated power outages. pic.twitter.com/Gl65EXNIT6

Either way, winter has clearly arrived. “We’ve had snow, but this will be widespread and relatively cold,” Simpson says. “Three days ago we were at 60 degrees, but now we have to plan ahead, especially if you have to travel in a vehicle for the commute. It could be a messy one.”

This post hast been updated with the latest forecasts.