Yes, the supply is low. But hospitals were reaching vulnerable patients without forcing them to navigate a buggy website. 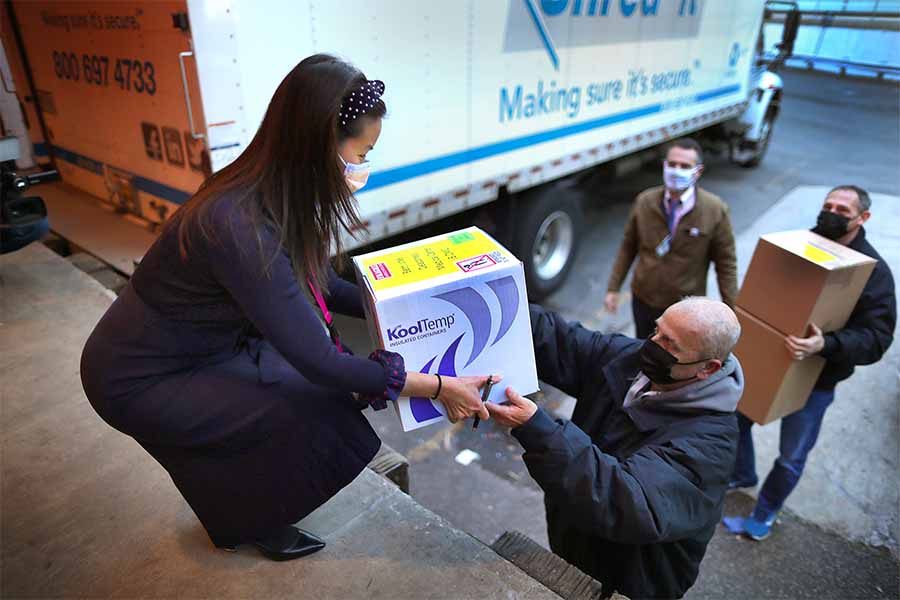 Pharmacy manager Christine Huynh, left, grabs the box of vaccines on the loading dock from a delivery driver in Boston on Dec. 15, 2020. Beth Israel/Lahey got their first shipment of the Pfizer COVID-19 vaccine, which arrived at noon. Photo by John Tlumacki/The Boston Globe via Getty Images

What in the world was he thinking?

I’m talking about the baffling decision by Gov. Charlie Baker—a man who prides himself on being a manager extraordinaire—to pull the plug on the world’s most renowned hospitals administering the COVID-19 vaccine earlier this month, in favor of deploying the medicine to mass vaccination sites like Fenway Park and Gillette Stadium. He’s since reversed course, but this technocratic guy—someone who had the prowess to save Harvard Pilgrim when he was its CEO—forgot the old adage: “If it ain’t broke, don’t fix it.”

The early days of the vaccine distribution saw Massachusetts ranking near the bottom of the country in a number of key statistics, but with the efforts of various local hospitals as a bright spot—at least until they stopped receiving a supply of the vaccine. Baker’s abrupt about-face this week to start redeploying limited supplies back to them is a welcome turn of events, but it’s hard not to wonder why they were stopped in the first place. When asked why hospitals had been brought back into the fold after the halt, a representative for the Baker administration pointed to the “extremely constrained” vaccine supply that they were working with, but said that they were aware of the “important role health systems play in the lives of residents” and thus had worked to provide a supply to “select hospitals and health systems.”

The initial move to withdraw the vaccine from hospitals, which the Baker administration pegged to a desire for efficiency in light of limited supplies from the feds, came after weeks of criticism of the state’s distribution of the vaccine, from racial inequities down to a confusing website that had people spending hours, often fruitlessly, trying to track down an available shot at a nearby location.

And the recent crash of the state-run website as additional residents were made eligible was hardly reassuring. Now, citizens are being driven to tips and tricks to get one of the coveted slots. The whole process created a particularly strong contrast to how smoothly things went if you were lucky enough to be connected to one of the local hospitals in the early days.

I should know—that’s where I get my care, and I went from notification to sign-up to first shot without a hitch. Lucky for me, Beth Israel Lahey Health had developed a process that reached out to eligible patients within its system to get them get vaccinated.

It wasn’t my first stop, though. I tried valiantly to go through the state’s process, but after struggling to navigate the state website and feeling like I was competing for hot concert tickets to see Taylor Swift, I threw in the towel. But a few days later, I got an email from BI Lahey informing me that I could now sign up with them to get the vaccine using a link they provided. Scarred by my efforts to sign up using the state site, I said to myself, “Colman, this is certainly an accident waiting to happen.”

Guess what: It turned out to be a breeze signing up. I clicked on the location I wanted, clicked on a day and time, and one minute later I got a confirmation email telling me I was all set. The whole process literally took me one minute. It was a dramatic contrast to what people currently experience when trying to use the state’s dysfunctional website.

By contrast, thanks to the Beth Israel process, I seamlessly scheduled my appointment for the very next week to get vaccinated at Temple Israel on Longwood Avenue in Boston. I had not been to temple in several years. So now I would be able to multitask—get vaccinated and say hello to God at the same time.

The appointed day arrived. As I traveled to the temple, I was thinking negatively again. “This is going to be a mess,” I kept ruminating. But you know what—it went like a charm there, too.

There was a line outside the temple, but it moved quickly. When I entered, I was asked for some identifying information along with the standard COVID-19 screening questions. I was then directed to a second line, and two minutes later an amiable nurse was administering the vaccine to me and doing so absolutely painlessly. The nurse then directed me to an adjacent room where I made an appointment to get the second injection. Seconds later, I received a text message confirming my appointment. For all the hubbub around getting shots in arms, it was all extraordinarily easy-peasy, as was the second shot I got a few weeks later.

So how was BI Lahey Health able to create an easy-to-use system that reached out to patients while the state bungled the job with a free-for-all website? To find out, I connected with Peter Shorett, BI Lahey’s chief integration officer, who runs the entire vaccination operation.

“We moved heaven and earth to be ready to go on day one,” Shorett told me. “Our staff was really energized to be part of this massive effort to help our patients.”

Shorett rattled off a number of elements that went into assuring that patients had a positive experience throughout the entire vaccination process. In sum, it involved a lot of intense planning, from trial runs to working with a comprehensive multidisciplinary team that brought a diverse set of skills to the table right down to the careful selection of which employees would serve on the project.

The patients who were invited to participate at one of the dozen sites in Greater Boston were all individuals who see a primary care physician or a specialist at BI Lahey. Remarkably, the list of eligible patients included anyone who had visited a BI Lahey emergency room within the last three years.

“We did that because we find that a lot of our most vulnerable patients come through the emergency room who don’t have a regular source of care, and we felt compelled to give them the opportunity to get vaccinated,” Shorett said.

And then of course, it all came crashing to a halt. But the return of vaccine supplies to local hospitals is a positive step, and Beth Israel wasted no time getting back on track, swiftly notifying 232,000 of its patients who are eligible for vaccination that they would be receiving invitations to make appointments.

In the meantime, the state has drastically improved its vaccine statistics. But halting a program that was contacting vulnerable residents in favor of letting them fend for themselves on a buggy website is a huge head-scratcher.