Riders spotted him with a full TV and console set up on a bench at the Harvard stop. 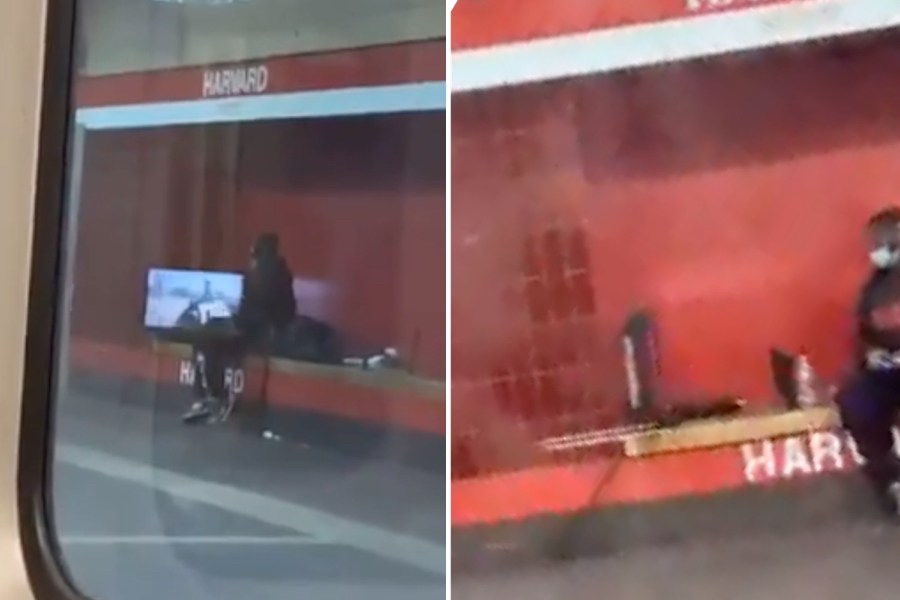 Screenshots from a video by Nick Keller, via @OnlyInBOS/Twitter

Gamers of Boston, it’s time to step up your… game. If you’ve been whiling away your time on public transportation with puny handheld devices—rounds of Words with Friends on an iPhone perhaps, or Zelda on Switch—you are simply not trying hard enough.

At least, not enough to compete with this guy, who riders spotted taking things to the next level at the Harvard MBTA stop on the Fourth of July. The unidentified man could be seen sitting on a bench on the subway platform and playing a few rounds of a first-person shooter video game (Call of Duty, it seems) on a flatscreen TV plugged into one of the station’s power outlets, while sporting a pair of bulky gaming headphones. He’s also, it should be noted, responsibly following the T’s masking policy while he’s at it.

Nick Keller, a Red Line user who says he was en route to dinner with friends in the late afternoon on Sunday, snapped a quick video as he passed through the station, and later sent it to Only in Boston, a popular account that shares content that speaks to the unique character of the city.

What people in Boston do waiting for their train to arrive… pic.twitter.com/PBKw9S4Pxi

How this scene came to be is unclear. Keller tells me there weren’t any unusual delays on the Red Line at the time that might inspire someone to get a couple rounds in while they waited. Besides, he says, the gamer appeared to be in no hurry to leave.

“I was cracking up, because he was just chilling there for a while and stayed there,” Keller says.

It was also not clear whether he was playing an online version of the first-person shooter game, he says, although it “kind of looked like it”—which would be quite the feat, considering how much data would have been needed, and how spotty the connection can be in the bowels of the T.

Gaming behavior on the MBTA tends to go unnoticed for the most part, but occasionally the agency has had to weigh in when people go overboard. Back in 2016, after video circulated of a man wearing virtual reality goggles and excitedly playing an immersive game during his commute, the MBTA said it was “not advisable” to do so. Not long after, T spokesman Joe Pesaturo spotted another man sporting a VR headset while standing precariously in the middle of a Green Line train. “Not recommended,” he said.

Not recommended. On the #MBTA #GreenLine this morning. pic.twitter.com/bRKtN3aPSK

The T has not shared any thoughts on this guy’s gaming habits, but I for one hope they let him be.