It's been five years. Where are the weed lounges voters wanted? 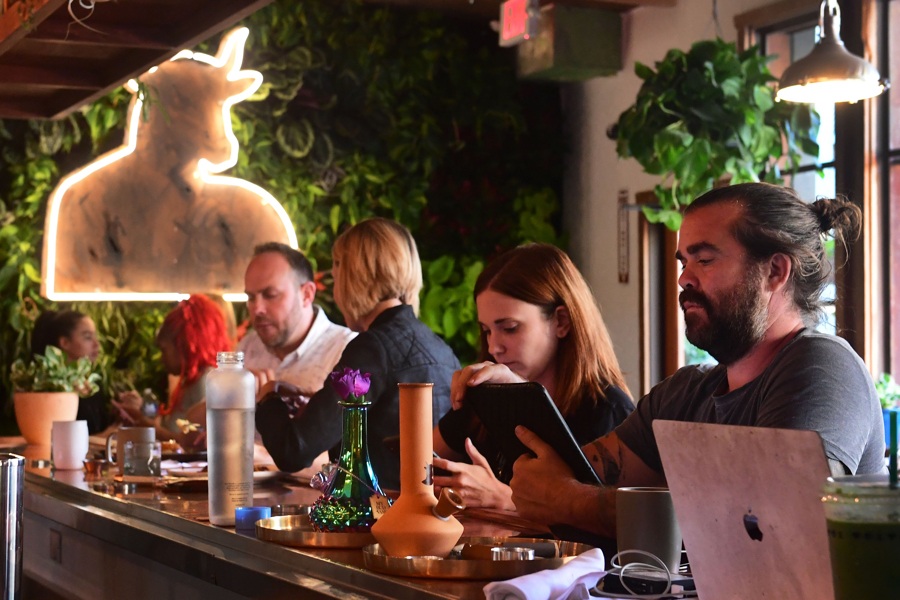 It should come as no surprise to regular Boston readers that while this city has plenty of fun things to do, and is in many respects getting more fun, we are still far behind where we ought to be on several key components of fun-ness.

One of the most obvious and persistently frustrating examples of this phenomenon is the state’s slow-walking of cannabis legalization, which became law a whopping half decade ago. After all that time, many dispensaries have opened their doors—right now, we’re approaching 200 stores statewide. Still, we have only just this year allowed marijuana delivery companies to get up and running (albeit with onerous regulations). And there are still not nearly as many pot shops in Greater Boston as you might expect for a city of this size.

But what has really started to grind my gears lately is the lack of another aspect of the cannabis industry that we still, after all this time, have yet to usher into existence: cannabis cafés. That is, public places where consenting adults can consume marijuana products of all kinds together, safely and legally, and without bothering anyone else.

I couldn’t help but notice that Apex Noire, the multi-level dispensary-slash-cocktail lounge concept set to open near Faneuil Hall sometime next year, would have been a perfect candidate for such a space, but sadly no one will be allowed to consume THC there legally.

So what gives? Where are the weed lounges, THC-enhanced yoga classes, pot-infused movie theater concessions, and Amsterdam-style coffee shops we were promised? What, in other words, has taken us so long?

It wasn’t supposed to be this way. Backers of the 2016 pro-legalization ballot question in the state meant for the new law to include cannabis cafés. So did the lawmakers who tweaked the law in 2017. It wasn’t until Secretary of State Bill Galvin concluded in 2018 that the law was flawed that the trouble really began. His office found that there was no legal way for communities to do what the law called for, which was to let voters decide whether to opt in to so-called “social consumption” sites. There is some controversy surrounding this, but it is what it is.

The state is ready to go. The Cannabis Control Commission in 2019 approved a pilot program that would allow a handful of towns to open cannabis lounges, study how things go, and in the process work out regulations for how these places will operate going forward. Even Charlie Baker is on board.

All that remains, it seems, is the need to patch up the existing law at the state house. House and Senate bills have been filed that would do so, and they were discussed at a hearing earlier this month, but the issue is just one of many marijuana-related concerns state legislators have to contend with right now—along with, most notably, the debate over how to fix so-called host community agreements.

I reached out to Julian Cyr, a state senator from the Cape who filed one of them. When I complained to him that this felt like the state clumsily getting in the way of progress yet again, he pushed back a bit.

“We worked to create a pathway, right? We were creative and intentional about the law that we passed in 2017. And we put a lot of effort into having strong equity components and to have a pathway to do social consumption,” he says. “This is more a case of being like, ‘Oh, this isn’t playing out how we intended. So we’ve got to go back and fix it.'”

Cyr agrees that the situation is frustrating, because the potential is so obvious. Think, he says, of all the visitors who flock to P-town in the summer and happily file into the local dispensary to stock up on pre-rolled joints or THC sodas only to find there is technically nowhere to enjoy them legally. So people end up lighting up on the street, or on the beach.

“I spend a lot of time on Commercial Street, and you can definitely smell marijuana from time to time,” Cyr says. “I think that social consumption venues will do a good job of addressing nuisance issues and also a better job of promoting public health than having the police tasked with trying to adjudicate this, and trying to ticket people for it. It just doesn’t make good sense.”

What makes the delay even more frustrating is that acceptance of cannabis use right now is higher than ever.

“I would say from talking to state elected officials frequently that they’re pretty informed on cannabis issues,” says Shaleen Title, the former Massachusetts cannabis commissioner who has written extensively about social equity issues with legalization in the state. “And I feel confident that if it was voted on, this would pass in a second. It’s just that no cannabis bills have been voted on [since 2017]. So I think it’s the leadership that’s the problem.”

Longer-term, even if the state does get its act together and fix the law, no one can say for certain what these social consumption lounges will actually be like. The debate over that is just beginning. In an effort to nudge this process along, and to help inform the coming regulations, a new group called the Massachusetts Social Consumption Advancement Coalition is taking shape, and held its first meeting earlier this month. Its founder, cannabis consultant Mike Brais, tells me the industry is concerned about proposed rules that would, for example, limit the size of doses cafés would be allowed to sell, allow sales only of edible products, or ban smoking marijuana flower—which he says would limit the appeal of social consumption sites before they even got started. So stay tuned on that.

Meanwhile, Massachusetts is getting lapped. Just look at all the fun our counterparts are having in states like California, where cannabis cafes are thriving.

And you actually don’t need to go to the west coast to see social consumption in action. If you’re curious, you can always join the Summit Lounge in Worcester, which gets around the state rules by operating as a private club and letting members light up their own weed inside if they choose to do so. Not a cannabis café, per se, but it’s getting there.

For now though, the cannabis industry has clearly had its wings clipped. And, as Brais tells me, it’s kept people from taking this burgeoning industry to the next level and doing what the law intended: letting people who’ve been persecuted for decades finally run small businesses that celebrate cannabis culture, fully legally.

“This could be a nice marketing mechanism for organizations, with a really low cost of entry, like running a bar, that’s accessible to locals,” he says. “Offering somebody a place that they can go where they can buy their cannabis and they can consume their cannabis in a one stop shop, it just makes all the sense in the world.”