Finally! Some Cold and Snow Is on the Way to Boston, Folks

Here's what you can expect from Friday's big storm. 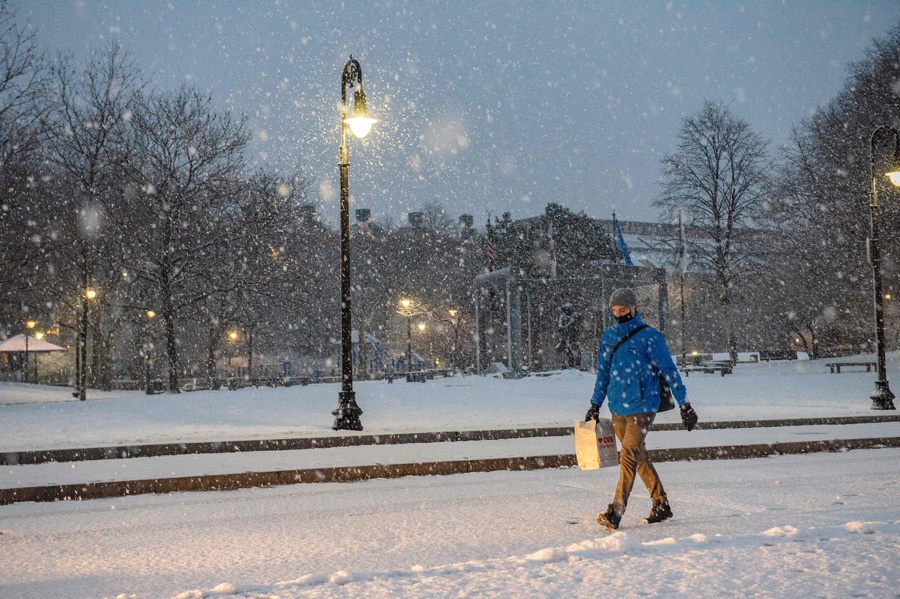 What type of winter would it be here in this beautiful, temperamental climate of ours if we didn’t get absolutely walloped by chilly precipitation from time to time? What right do we have to our claims to world-class northeastern city if not for the occasional mad rush to hoard french toast ingredients, or the inevitable blood-curdling rage over parking faux pas? What, in other words, is Boston without snow?

Just in case you thought we might glide through 2022 without a true blue winter storm, we’ve got one in store this week. As of early afternoon on Thursday, the forecast is getting more and more serious. Things can change, of course, but the National Weather Service is calling for 6-8 inches overnight, beginning at around 1 a.m. on Friday and carrying on through the morning, which could make the commute pretty hairy.

NWS models are predicting periods of heavy snowfall, as in 1-2 inches per hour.

[1130 AM] While a fairly quick-hitting system, we are expecting a period of 1-2 inches per hour snowfall rate to coincide with the Friday morning commute across portions of eastern MA, RI and northeast CT. Be sure to plan ahead! #Boston #Providence #MAwx #RIwx #CTwx #snow #winter pic.twitter.com/GkZei7DLaI

As of early Thursday, a winter storm warning was in effect for the eastern part of the state as well as Rhode Island.

Winter storm watch has been upgraded to a winter storm warning for RI and parts of eastern MA. 6-8 inches of snowfall expected. This storm will impact the morning commute. 1 inch per hour snowfall rates will be possible from roughly 6-9 am over the warning area Friday morning. pic.twitter.com/46AlCUTVkn

Boston Public Schools has already declared a snow day and canceled classes for Friday. Considering all the anxiety about in-person learning amid a surge of you-kn0w-what, maybe that’s for the best all around.

WEATHER UPDATE: Due to the forecast of snow tomorrow, all @BostonSchools buildings will be closed on Friday, January 7 to keep everyone safe. More: https://t.co/egrMFL4Itv. pic.twitter.com/JHNoLzuC7g

So far it’s been pretty quiet on the snow front around here. The city has seen just a few light dustings so far, and nothing that stuck around very long. Temps after the storm will be pretty chilly, with highs expected to be n the low 30s for Saturday and high 30s for Sunday and Monday, then dropping into the 20s Tuesday and Wednesday.

For anyone who was curious about such things, the existing rules on space savers will persist in this new era for city hall. New mayor Michelle Wu has opted to carry over the edict that says you’re allowed to hold a spot with the chair, cooler, or outdated Tom Brady cardboard cutout of your choosing for up to 48 hours after a snow emergency expires. That is, unless you live in the South End, where space savers have been verboten since 2015.

And to think, there’s still several months of this in store. Let’s go!!!