A deep freeze is coming that has already closed schools and could slow down the MBTA. 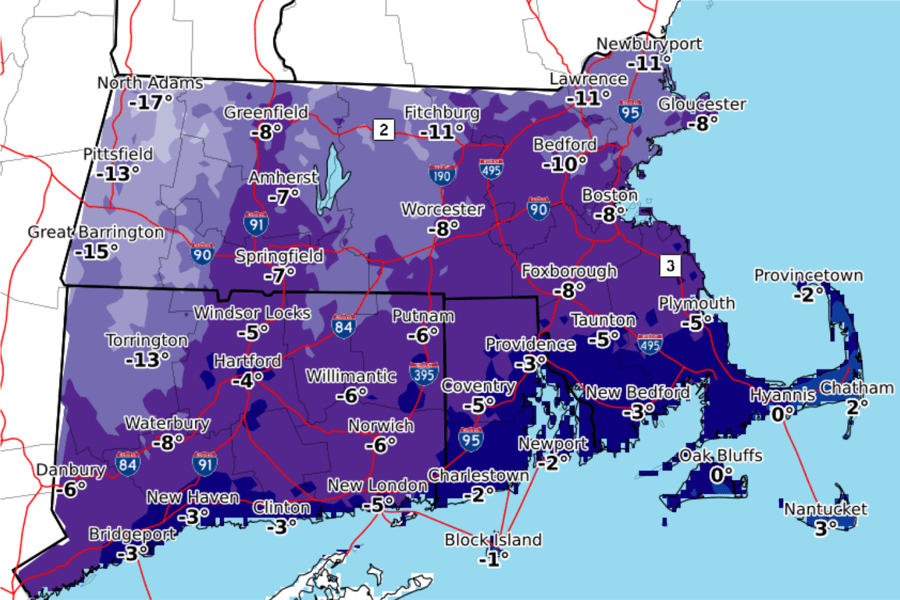 Now would be a very good time to invest in some long johns. Or if you can possibly swing it, to consider not leaving the house at all.

That’s because, in case you haven’t heard, a big frigid mass of freezing cold arctic air is gunning for Boston right now. And it does not look pretty. In fact, it could end up being Boston’s coldest January 11 on record.

Forecasters now warn that wind chills could drop as low as -8 degrees on Tuesday as a cold snap set to take hold over night arrives. A wind chill advisory has been issued for higher-lying areas in the state, including the Berkshires and Worcester Hills, where the air could feel as chilly as -15 degrees, but not for Boston as of Monday afternoon.

An arctic blast will bring frigid temperatures and breezy winds to the region on Tuesday. A Wind Chill Advisory is in effect for the high terrain of Massachusetts for wind chill values as low as -15 to -20 F. Get your local forecast on your phone at https://t.co/rzUcISxEgM 🥶 pic.twitter.com/xc1KN5GUw1

Thanks to NOAA models, meteorologists can actually trace the icy blasts all the way back to Alaska. How exotic!

[Arctic blast] Alright folks, we all know by now it is going to get VERY #cold tomorrow with a forecast high of 11°F in Boston. So when we ran the backward trajectory model, we can trace the air all the way to Utqiaġvik (formerly Barrow), Alaska! @NWSFairbanks #MAwx #RIwx #CTwx pic.twitter.com/vHwY46bBdK

Already, Boston Public Schools have canceled classes for Tuesday. The closure comes on the heels of a snow day on Friday.

WEATHER UPDATE: Due to extreme cold weather tomorrow, all @BostonSchools buildings will be closed on Tuesday, January 11 to keep everyone safe. ❄️🥶

And the MBTA has warned that the cold could lead to some delays and slow down the Tuesday commute.

“Because of the extremely cold temperatures anticipated this week, we want to encourage our customers to dress warmly, allow for extra travel time, and be mindful of icy conditions,” MBTA General Manager Steve Poftak said in a statement. “The safety of its customers and employees continues to be the first priority for the MBTA.”

On the other hand, this means we may or may not see the return of the T’s very metal technique for unfreezing frozen switches: Setting them on fire. It looks pretty cool when it happens, all things considered. But as always, spare a thought for the T workers who absolutely cannot do all the work this frigid weather necessitates from the couch and will have to be out there dealing with all this.

There are other concerns this ultra-cold weather will bring with it. The arrival of the storm comes as the city embarks this week on its latest effort to relocate people experiencing homelessness and living in tents on the street. Life-threatening cold makes matters all the more urgent due to the risk of hypothermia, or the dangers of using makeshift heat sources like propane tanks, Mayor Michelle Wu said Monday, adding, “We’re really approaching past the point of urgency here.”