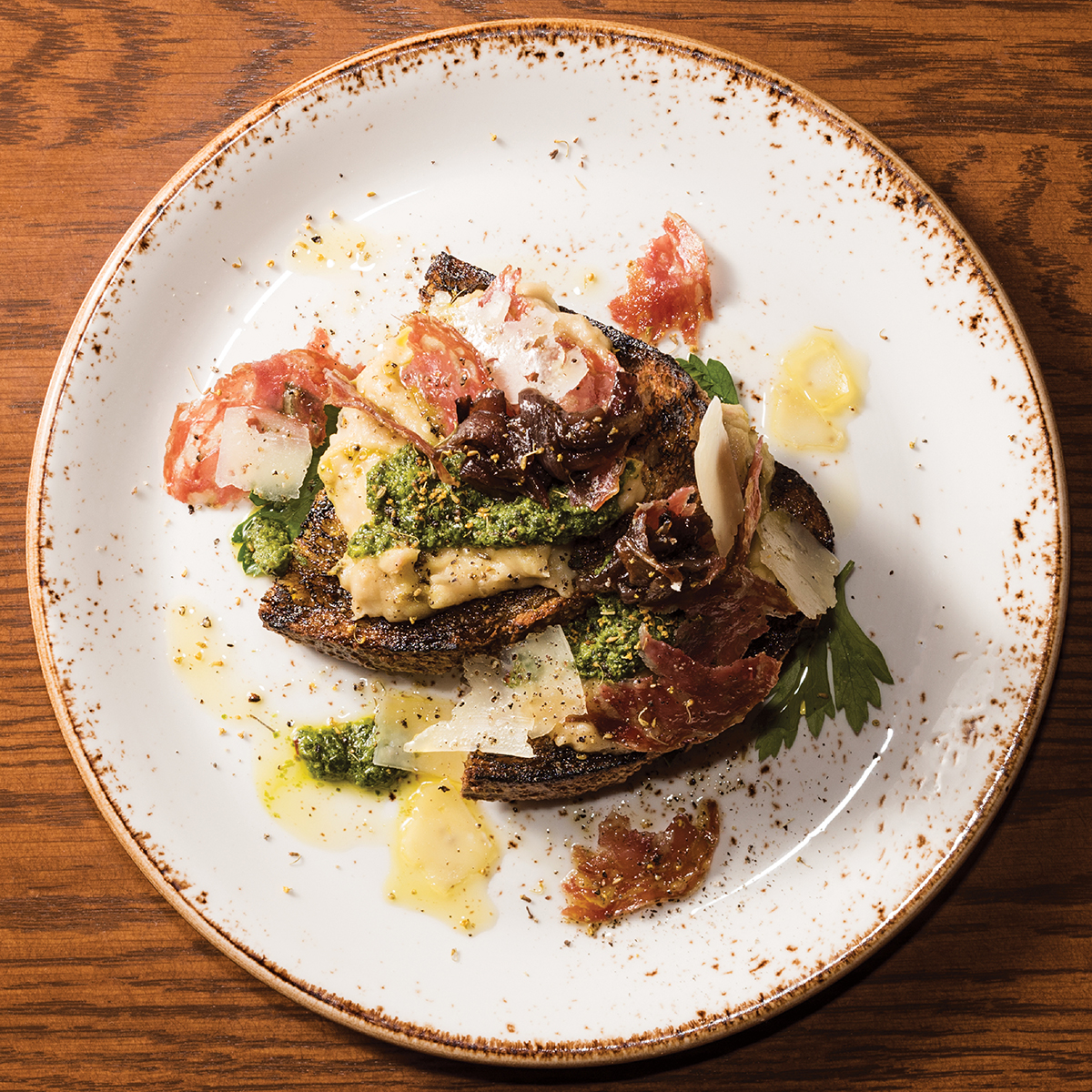 As far as I can tell, the only way the desserts at Benedetto, in Harvard Square, could get any better would be to experience them as a tiny, sweet-tooth explorer. The enchanted sugarscapes created by pastry chef Renae Connolly are so live-action Candy Land, so Dr. Seuss meets Willy Wonka, that you get a yen to wander around the plated vignettes like they’re edible sculpture gardens—a confectionery deCordova, if you will—and Hansel-and-Gretel the things.

At a moment when dessert style tends to fall into one of two camps, homey nostalgia or ice-cold abstraction, Connolly brings to Benedetto—Michael Pagliarini’s fine-dining follow-up to his beloved trattoria, Giulia—a whimsical program that cuts a path down the middle. Her razor-sharp platings can go mano a mano with the city’s best pastry chefs. Take, for example, the lemon torte ($13): Sometimes piping is just piping, but other times, it’s the magic behind trompe l’oeil lemon curd toadstools capped with caramel-coated crispy rice puffs and red-veined sorrel leaves—flanking a fuschia-bright cobblestone roadway stenciled, in precise one-point perspective, with viscous prickly-pear sauce. At hard right, a snow-capped (read: sugar-dusted) promontory of moist, lemon-curd-slathered cake, barren but for odd sproutings of ginger-syruped cucumber. Across the way, an ellipsoid boule of prickly-pear sorbetto. It all tasted nuanced and dreamy, even as a loping giant pawing spoonfuls from on high.

I mention desserts first partly because they’re just so darned good, but also as a prelude to praising the overall structure of Benedetto’s menu. There are many reasons the city is experiencing a renaissance of fine Italian restaurants, not least of which is our embrace of the small-plates revolution. Gone are the days of gift-with-entrée-purchase spaghetti mounds at North End red-sauce joints. At long last, we’ve figured out that the traditional antipasti-primi-secondi-dolci model has always embodied freewheeling modularity. 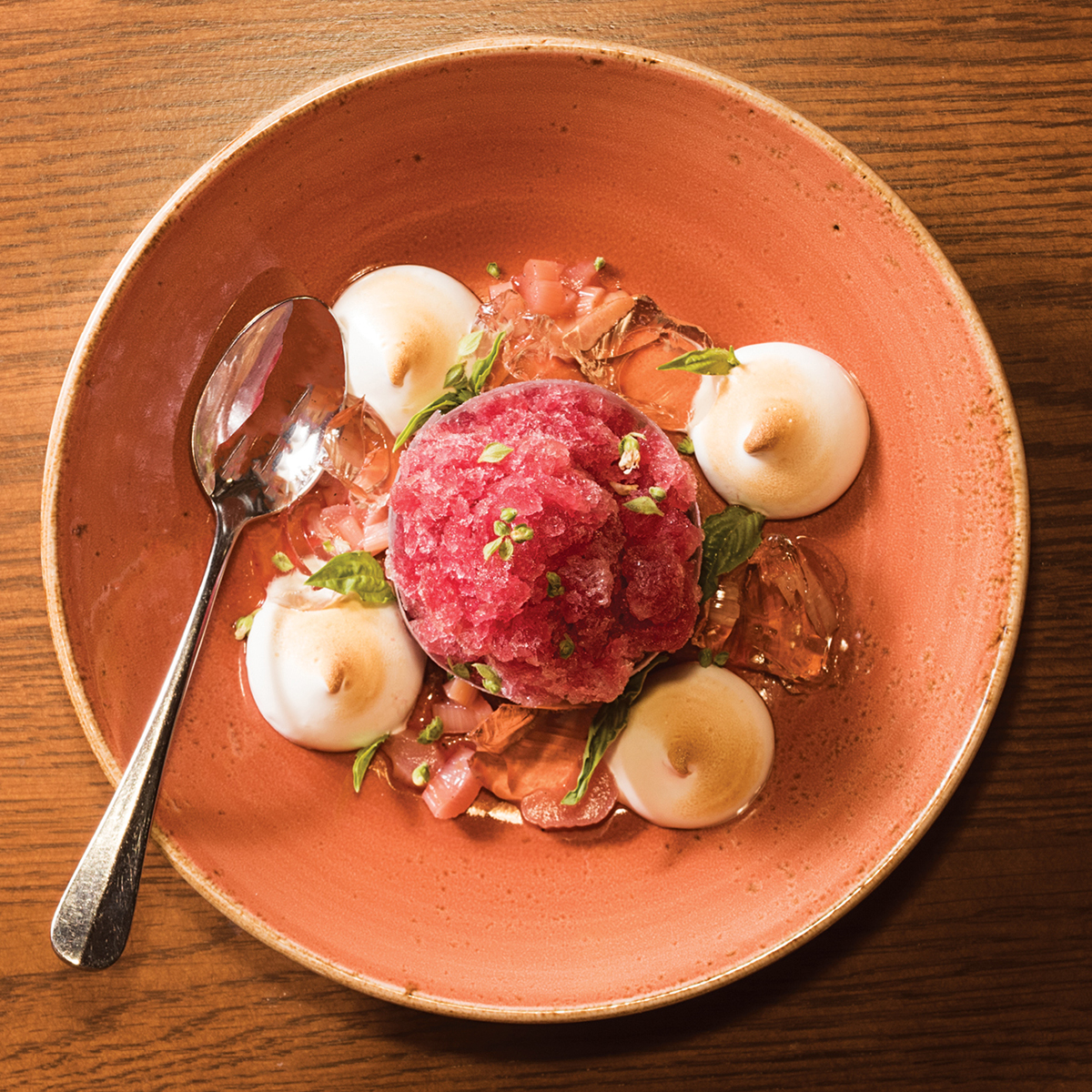 Benedetto’s sfizi section, in particular, was strong across the board. My favorite: a masterfully constructed bruschetta ($6), charry-edged house-baked sourdough lavished with white-bean purée, crisped soppressata, a swoosh of pecorino-thickened broccoli-rabe pesto, grilled red onion, lemon zest, and a dusting of fennel pollen that echoed the complex anise notes of the beans. Crispy polenta cakes ($12) dolloped with silky baccalà mantecato (whipped salt-cod spread) and briny caviar benefited from exceptional grain sourcing—in this case, cornmeal from Four Star Farms, in Northfield. The sfizi are priced as two pieces, but they’ll sell you between one and infinity—more or less—for the prorated price. I could write an entire column on how much I approve of this flexibility, and how infuriating I find the opposite, but…anyhow.

As Boston’s mod-Italian scene blossoms, Pagliarini’s meticulous noodle craft may be matched on occasion (see: SRV) but never beaten, particularly in his sensitivity to the textural idiosyncrasies of different flours. By contrast, I find that the sauces—both here and at Giulia—toggle between two modes: extraordinary and correct. In the former category, strozzapreti ($21)—tossed with a bright and tangy simple tomato sauce, pecorino, and house-cured pork belly—is an improvement on the flabbier Roman original. I also liked the braised-duck-leg tortelloni ($23) in a savory brodo punched up with dried cherries, broccoli rabe, and good Parm-Regg. Linguine alle vongole ($23), with clams, white wine, garlic, lemon, and parsley, was a technically solid rendition. But I had to double-check my receipt to remember I’d tried it.

My gut tells me Pagliarini doesn’t like to play fast and loose with traditional flavor profiles, which…respect. That said, even staunch monotheists (see: Charles Draghi at Erbaluce) have taught us to crave inspired flourishes that dance at the edges without coloring outside the lines. Put another way: When I don’t like a dish at Erbaluce, I dislike it with a passion. When it happens at Benedetto, it’s because I’m bored a few bites in. Safeguarding tradition is noble, but classic recipes should be inspiring, not constraining. 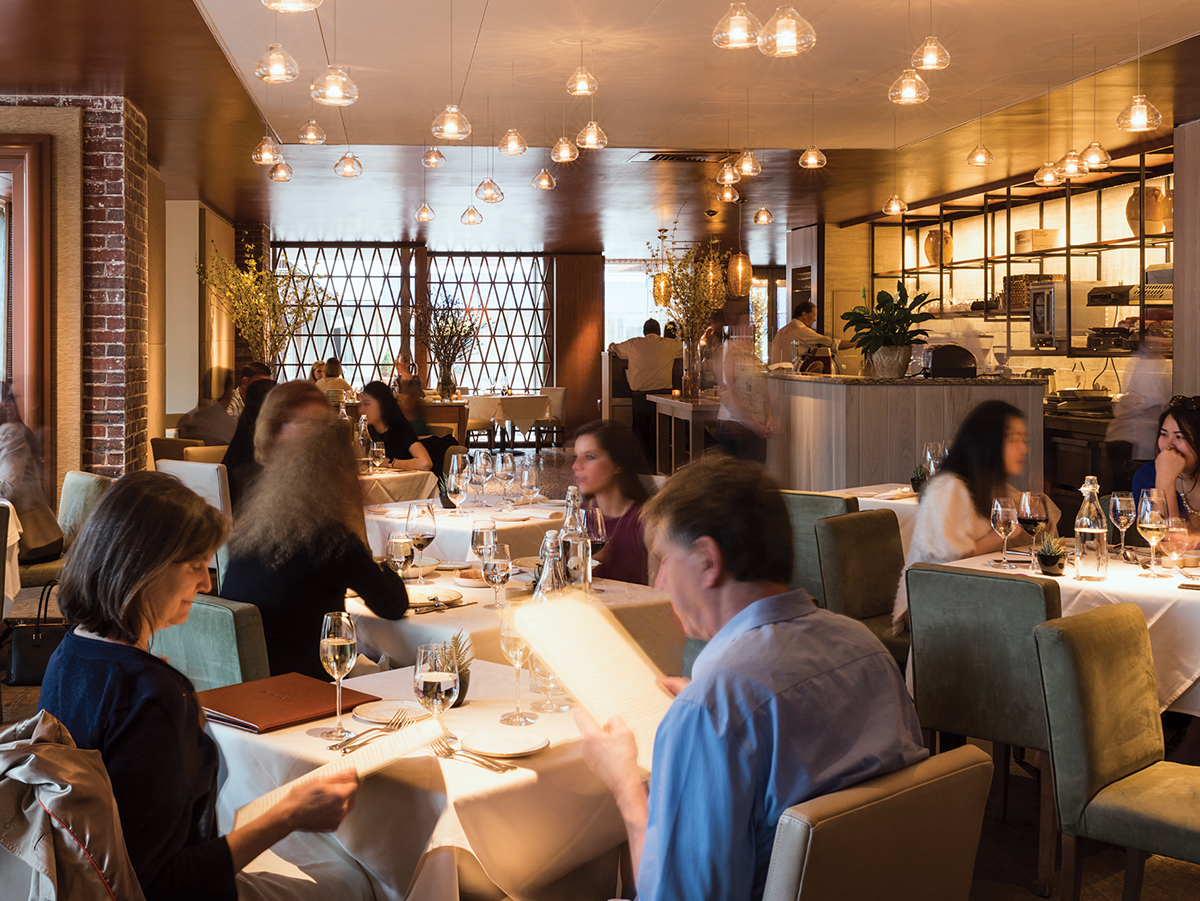 Over three visits, my favorite secondi was a grilled branzino ($32), the smoky-skinned fillet nestled atop a gloriously rich and supple-textured ceci-bean vellutata (velvety soup) made with roasted fish bones and strewn with Chatham mussels, braised fennel and spinach, and tons of bright citrus. The assertively charred bone-in beef rib-eye ($48) was on par with or better than any other Italian-restaurant version in town.

Service was generally excellent, especially the wine program. Benedetto took on some of the deep, Piemonte-rich cellar left behind by former tenant Rialto, and oenophiles will thrill to the number of interesting bottles in the two-digit realm. A few minor quibbles: If Benedetto wants to shed Rialto’s reputation as hotel dining for the genteel Harvard set, it has to dump the white tablecloths. And if dining out is the totality of the experience—a Gesamtkunstwerk encompassing food, plating, and service right down to the sincerity of the twinkle in the coat-check guy’s eye—the dessert plates (the physical objects) need rethinking. It’s a crying shame that Connolly’s visual masterpieces have to compete with dishes that look like they’re pre-scattered with cocoa powder or ground cinnamon. It’s molto ’90s, and not in a good way.

But ah…what desserts they are. If you’re like me and tend to order way too much from the savory section of the menu, maybe all you’ll have room for is, say, a refreshing blood orange–elderflower granita ($13). But this is no consolation prize in a bowl. Connolly creates a cylindrical vessel out of sugar tuile to keep the plate tidy, then decorates with a few blobs of poached fruit and lemony meringue. Bold, flavorful and palate-cleansing, the dish will make you wish you were just tall enough to scale the translucent Tyrrhenian-blue walls, hop over the sides, and dive right in.