Peruvian-Japanese gets its grandiosity on at the Godfrey in DTX. You’re probably going to want a drink. 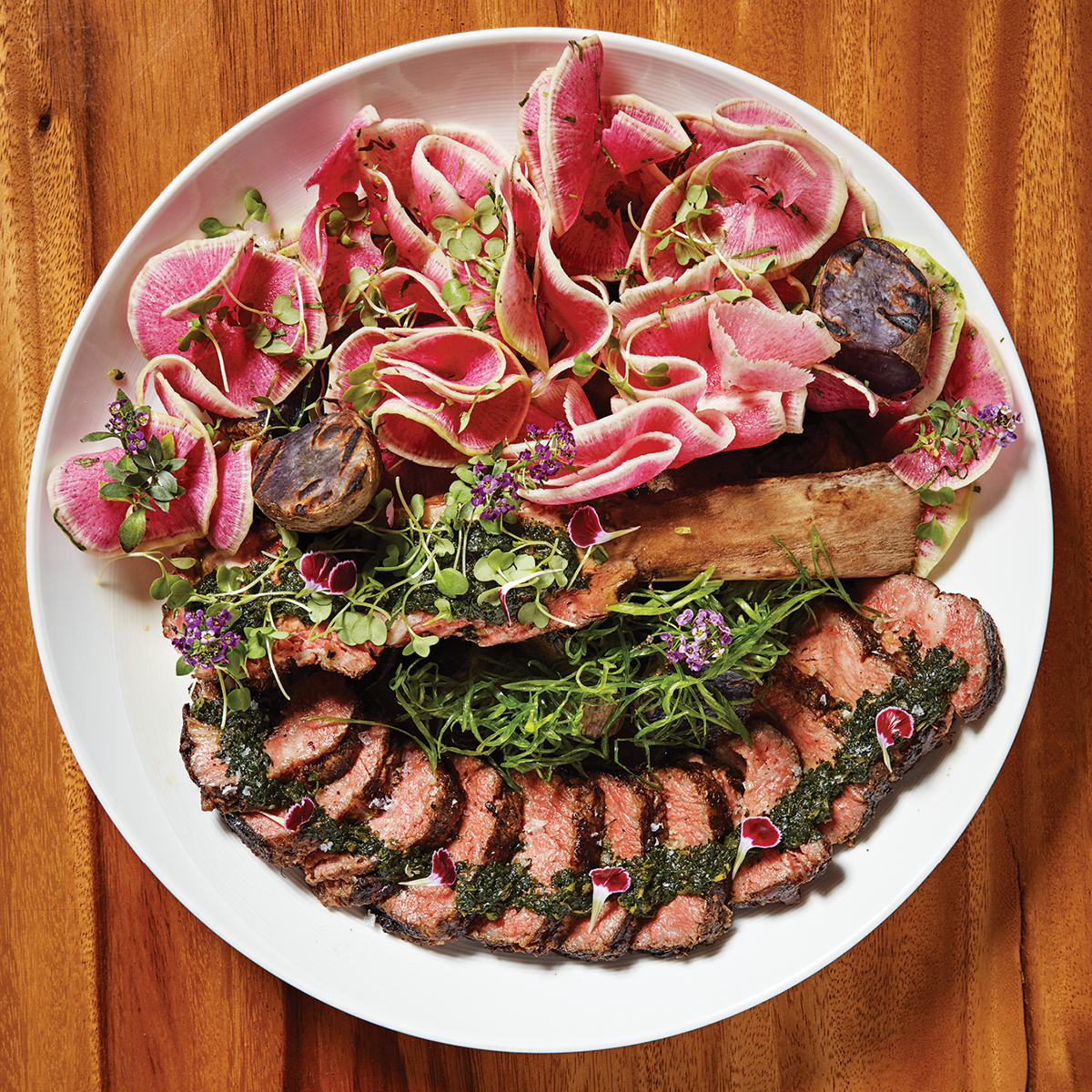 Theater is the name of the game at Ruka, the Peruvian-Japanese fusion hot spot ensconced like an iridescent Inca-chic temple off the lobby of Downtown Crossing’s urbane Godfrey Hotel. A grandiose, on occasion overwrought theatricality that oozes from every gleaming nook and copper-studded cranny.

Enter the cavernous dining room, and a vaguely avian chandelier swoops down from its primordial nest on the double-high ceiling. Surrealistic murals conjure visions of Peru in all its natural and otherworldly glory. Over at the bar, slithery dragons coil around stone pillars, as Inti, the Incan sun god, peers down from on high, eyes and mouth illuminated in spooky orange tones.

Smoldering fires, gaping gullets: Ruka’s recurring themes. “Fuego Wagyu” maki ($36), filled with sweet gochujang-spiked beef and scallions, are wrapped in carpaccio-thin raw A5, then arranged along the parallel bars of an elaborate portable spit, where they’re lapped by anise-perfumed flames on the way to the table. A slack-jawed “Big Fish” waffle ($16) disgorges a bolus of prickly pear sorbet, lucuma ice cream, caramelized banana, peanut brittle, and various viscous swooshes. Across the way, a frosty metal crocodile-shaped pitcher drools down a potent, pink-tinged elixir brimming with tequila, mezcal, and hibiscus (Sacha Mama, $95, serves four-ish) from its toothy grin. “If an unsuspecting passerby gets too close,” warns the cocktail’s 80-word description, “Sacha Mama will devour them whole.” 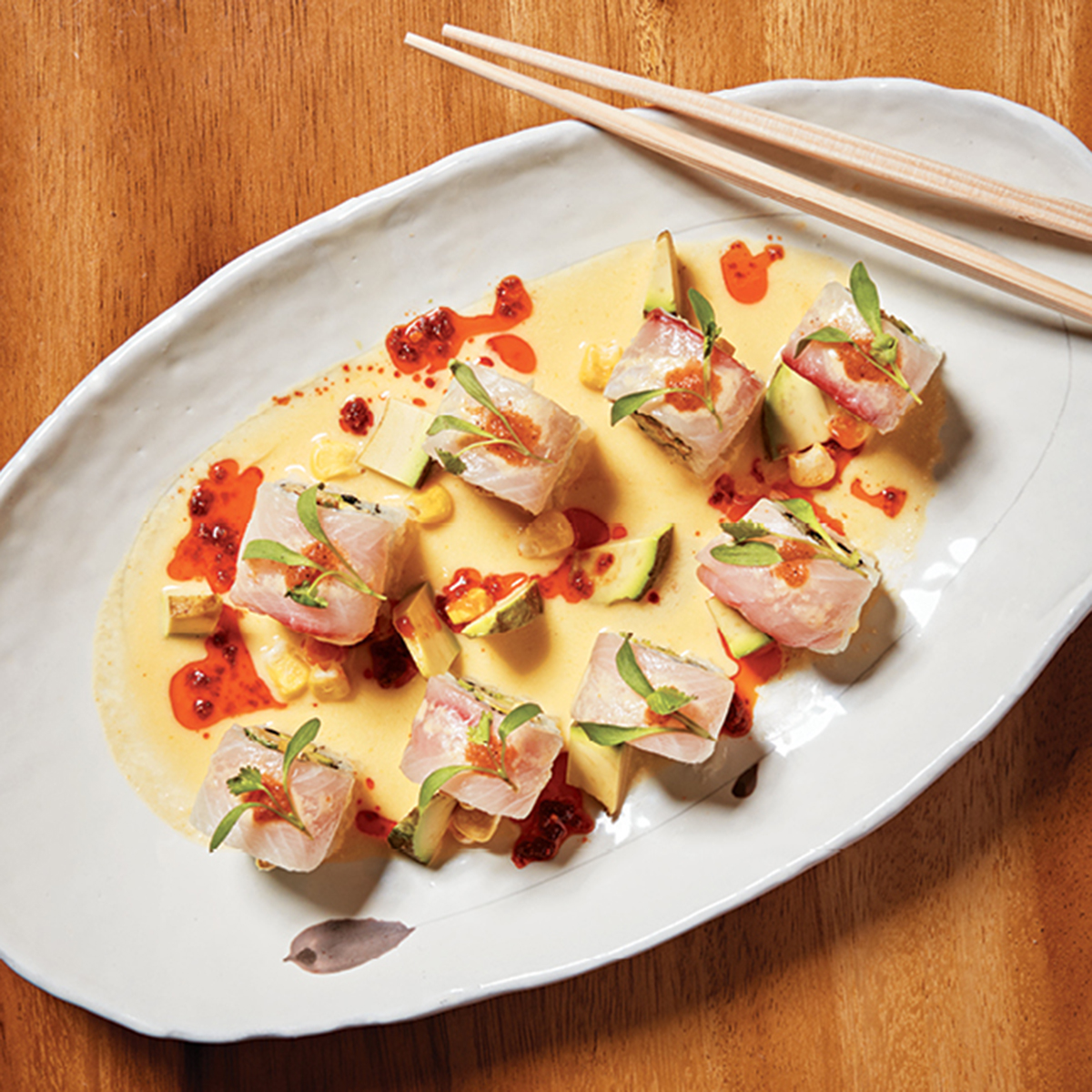 And so it goes. The over-the-top-ness will surprise no one familiar with Ruka’s sister restaurant Yvonne’s, the hyperactive grand tour of world cuisines just around the corner. Here, the focus is nikkei, a mash-up of Peruvian cuisine with Japanese, plus a smattering of chifa (Chinese-Peruvian): two hybrids that have evolved organically in Peru since the 19th century, thanks to an influx of expats who adapted the food of their homelands to available ingredients. Over the past decade, nikkei has ridden the wave of upscale-casual dining’s obsession with raw fish and small plates.

When all cylinders hit at Ruka, the results can be splendid. Half the menu showcases raw or citrus-cured seafood in the form of maki rolls, ceviches, and tiraditos (sashimi-style crudo). It is the restaurant’s strong suit. Halibut ceviche ($15), quick-cured in passion-fruit nectar and milky nigori sake, was strewn across a smoky smear of burnt-bread paste the color of squid ink, dotted with Brazil nuts, flower petals, and avocado purée. Hamachi amarillo maki ($17) was a nuanced study in textural counterpoint: avocado creaminess versus the springy snap of baby corn; the granular softness of gently vinegared rice swaddled in a cool, velvety blanket of pristine yellowtail.

Even better was seared hamachi tiradito ($17), hit quickly on the plancha before getting sliced and nestled in a gazpacho-like sauce made from cucumber, garlic, and fiery ají amarillo chili oil. Finished with sweetened diced cucumber and Sichuan-spiced mushrooms, it was precise and transcendent—and better than the best renditions of this uncommon seared-style variant I tried a few years back on a weeklong Lima food crawl. 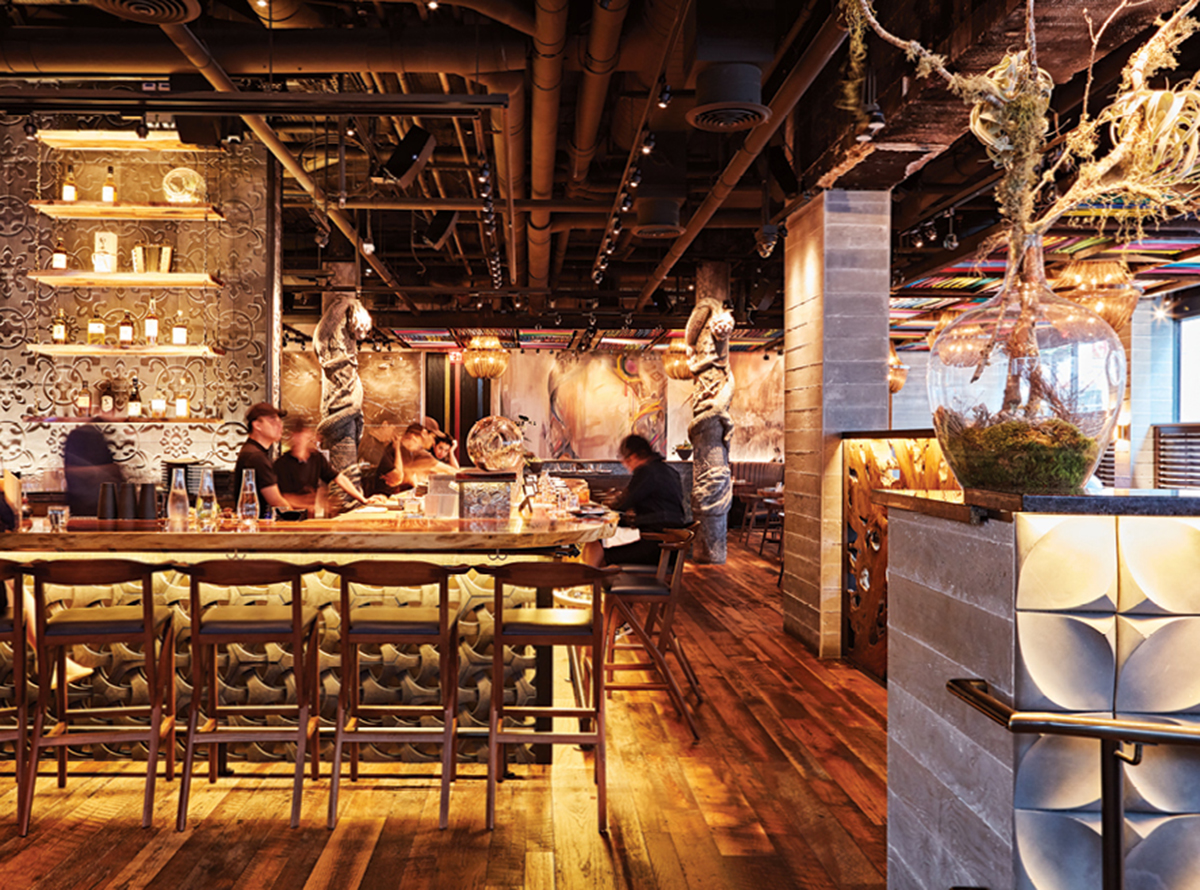 Over several visits, the cooked side of the menu was weaker as a general rule, but here too were epiphanies. Anticuchos are Peru’s answer to robatayaki skewers, and Ruka offers versions featuring octopus ($12), chicken thigh ($11), mushroom ($9), and, hands down the best, charry, fat-riddled rib-eye cap ($19). The kitchen dusts it with chili salt bolstered with soy powder, burnishes it on a hot grill, and slathers on caramel-hued dashi butter. Yet another contender for menu MVP: pork wontons ($17) bursting with quinoa-leavened fatty ground pork seasoned with garlic, fermented bean sauce, and ají amarillo. Steamed to order, the pillowy beauties get drizzled with neon-orange chili oil redolent of star anise, cumin, and lip-numbing Sichuan peppercorn: chifa at its most sublime.

This is the point at which I normally offer a laundry list of dish-level quibbles, though in this case I’m hesitant. Not because I don’t have some, but because I get the sense that Ruka’s been stuck in triage mode lately. That the company’s culinary director, Tom Berry—who oversees Ruka, Yvonne’s, and Lolita—knows something’s off. The clues: dishes cycling off and on the menu at breakneck speed; a couple of major staff changes. I’ve spotted Berry tinkering in front of Ruka’s line, brow furrowed. I’ve seen Yvonne’s chef Juan Pedrosa pinch-hitting on a busy Friday. But mostly, I hesitate because I don’t think the reason this restaurant hasn’t hit its stride since it opened last December has much to do with how badly the jarring acidity of the “pickle salad” clobbers the underseasoned tea-smoked duck ($75). The recipe and execution problems, I have zero doubt Berry will unravel.

No, I think Ruka faces broader conceptual issues that are keeping it in this holding pattern. It boils down to this: Applying the Yvonne’s model to a restaurant like Ruka isn’t working so well. They’re two different beasts. The manic monumentality that animates Yvonne’s works precisely because of its dilettante mission. Example: The pork “viper” chop platter served on kimchi fried rice with umpteen flourishes succeeds only because the rest of the menu doesn’t purport to do Korean. It’s flirtation, not deep exploration. A riff or two at every port of call, then off to Istanbul, to Tokyo, to Buenos Aires!

Easier said than done, no doubt, but what if—just maybe—the only way to keep Ruka from enduring life as a Peruvian Yvonne’s kid sister is to, you know, stop that?