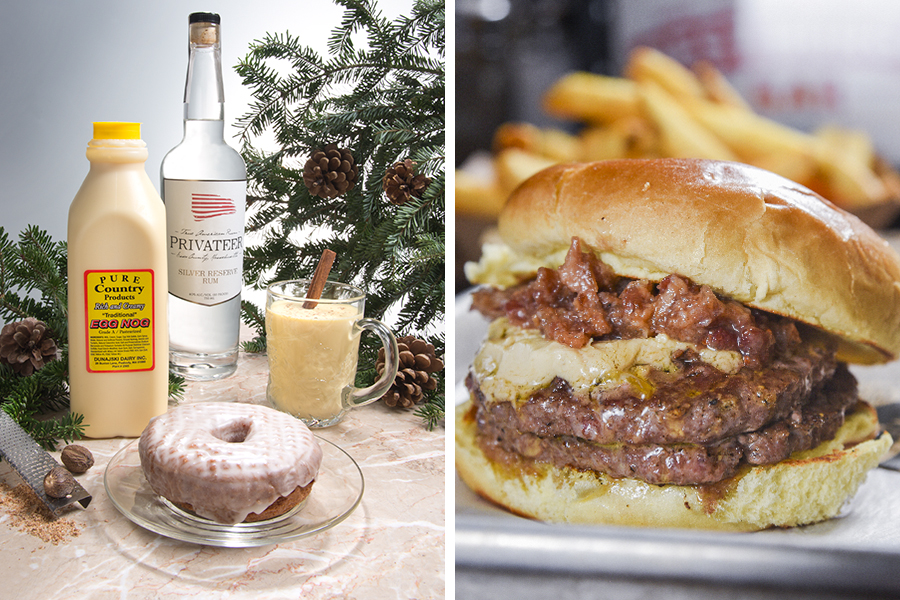 It’s been 84 years since Prohibition was officially repealed in the good ol’ U.S of A—bars like Lion’s Tail, GrandTen Distilling, and more are celebrating Repeal Day on Tuesday, Dec. 5, with classic cocktails and more revelry.

Get started early this year in a totally socially acceptable way, with booze-infused—but non-alcoholic—breakfast and lunch. Kane’s Handcrafted Donuts and Brookline’s new Best Burger Bar both have spirited specials on the menu for the month of December.

At both Kane’s downtown Boston location and its Saugus original, two monthly doughnut specials feature festive, local libations. The Farmer Willie’s Craft Ginger Beer doughnut uses the Boston-based, Rhode Island-brewed Extra Ginger Beer, and gets an extra kick from a touch of cayenne, as the zesty glaze for Kane’s gingerbread-cake ring. It’s the second year in a row that Farmer Willie’s has partnered with Kane’s during the holidays.

“We take pride in staying true to our roots here in New England and supporting other local and like-minded companies, and always using local ingredients when possible,” Kane’s co-owner and president Paul Delios said in a press release.

Both specials are available alongside other Kane’s holiday favorites, like chocolate candy cane, throughout the month of December.

“When the Best Burger Bar team was looking to collaborate with a local whisky brand for the Royale burger, I immediately thought of the Bully Boy American Straight Whiskey. We were already proudly using it in our signature Steak House Manhattan cocktail and [it] just seemed like the perfect match,” Cleve said in a press release.

Bully Boy’s flagship whiskey is well-balanced with corn and rye, which makes it fit for food, distillery cofounder Will Willis added. “The smooth and nutty notes of the whiskey really shine in the jam that’s used on the burger,” he said in a press release.

All alcohol is burned off in the cooking process for both the jam, and the doughnuts—so you can start Repeal Day, or your holiday shopping, off on a celebratory note without getting buzzed by lunchtime. Cheers to that.