The star pastry chef is consulting on the Sharon project while developing her own ice cream brand. 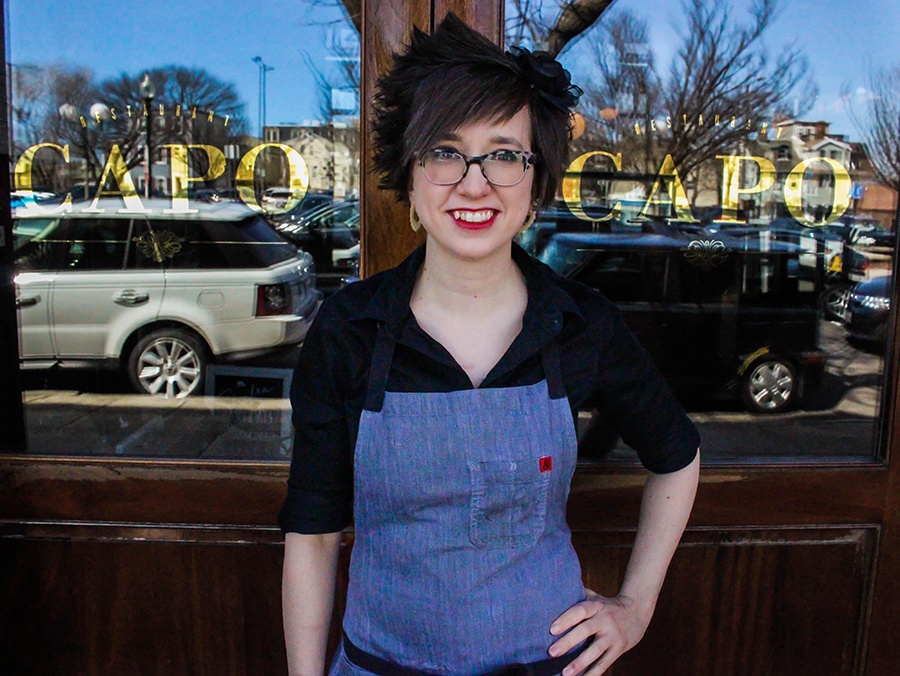 A creative culinarian known for whimsical cakes and nostalgia-invoking desserts is sharing her talents with a new project: Kate Holowchik has joined Avi Shemtov’s suburban venture, Simcha—which opens March 5—as a consulting pastry chef. Holowchik, a former Zagat 30 Under 30 honoree who has helped open high-profile Boston restaurants such as Yvonne’s, will establish the Israeli soul food restaurant’s important pita program, and flex her own creative muscles on the dessert and brunch menus. But both the pastry chef and her new boss are clear that Simcha is just the latest step toward Holowchik’s goal to open her own ice cream shop.

Simcha will open in Shemtov’s hometown of Sharon, featuring a menu of globally influenced Sephardic Jewish food made with New England ingredients. The Chubby Chickpea food truck founder’s friend and industry peer, Holowchik, has the drive and talent to match the level of this very personal project, he says.

“I need someone I trust, someone who eats, sleeps, and breathes food, like me. It’s not a career, so much as it’s a passion,” Shemtov says. He appreciates Holowchik’s flavors and artistry, but also her willingness to speak her mind in the kitchen and lead, he says. “She’s going to help my dream come true, and then take over the whole industry.”

Holowchik has spent the past year and a half with the Broadway Restaurant Group, spearheading the Italian-leaning pastry program at Capo, and creating super fun sweets for Lincoln Tavern’s beloved brunch. She also takes on custom cake commissions, and has made impressive creations for the likes of O Ya, for its 10th anniversary; Roald Dahl’s grandson; and just recently, Super Bowl MVP Julian Edelman.

But South Boston can feel like a “microculture,” she says. “You can only push the boundaries so far. That’s what the neighborhood wants, and it’s perfectly fine. But one thing I’ve always done is push my flavors and have bigger conversations about the industry itself, and I never felt like I could get that platform there.”

The pastry chef’s ultimate goal? Owning her own platform. She’s actually well on the way. Holowchik is working with a silent partner to look for a modest space to open a wholesale ice cream business, she shares. “Ice cream, next to doing cakes, is my ultimate favorite thing,” Holowchik says. “Amongst some of the great ice cream shops out there in the Boston area I feel like I can have a distinctive voice.”

While that project takes shape, Holowchik can add to her repertoire by playing with the Simcha flavor palette, while staying in somewhat recognizable territory. She developed a pita recipe for Yvonne’s, and “I’m familiar with Israeli food, but I didn’t realize how [many] other cultures have influence on it,” she says. “You’re pulling African flavors. My grandparents are Ukrainian and I grew up with that kind of food, and there’s so much crossover with Israeli food and Eastern European food. It clicks with me.”

Holowchik recently joined Shemtov for a pop-up Simcha brunch at the Townshend. The event previewed some of the flavors diners can expect from the pastry program, such as (pictured, below) a ras el hanout carrot cake fritter with a sweet labneh glaze and coconut macaroon crumble (which is actually an Israeli-spiced update of a menu item she created while pastry chef at the Quincy tavern); a Milky Pudding-inspired snack of mocha mousse, whipped labneh, coconut macaroon crumb, and babka tuile; and Babka French toast, filled with farmers’ cheese-pistachio baklava filling and drizzled in cinnamon bark maple syrup.

Shemtov is excited that Holowchik is sharing her ideas with his latest menu. “At some point the Kate Holowchiks of the world have to do things they were meant to do rather than developing pita programs for a restaurant like mine. She’s talented. I feel like I was born to lead, and I know Kate’s the same type of person.”

Simcha plans to open in Sharon on Tuesday, March 5. 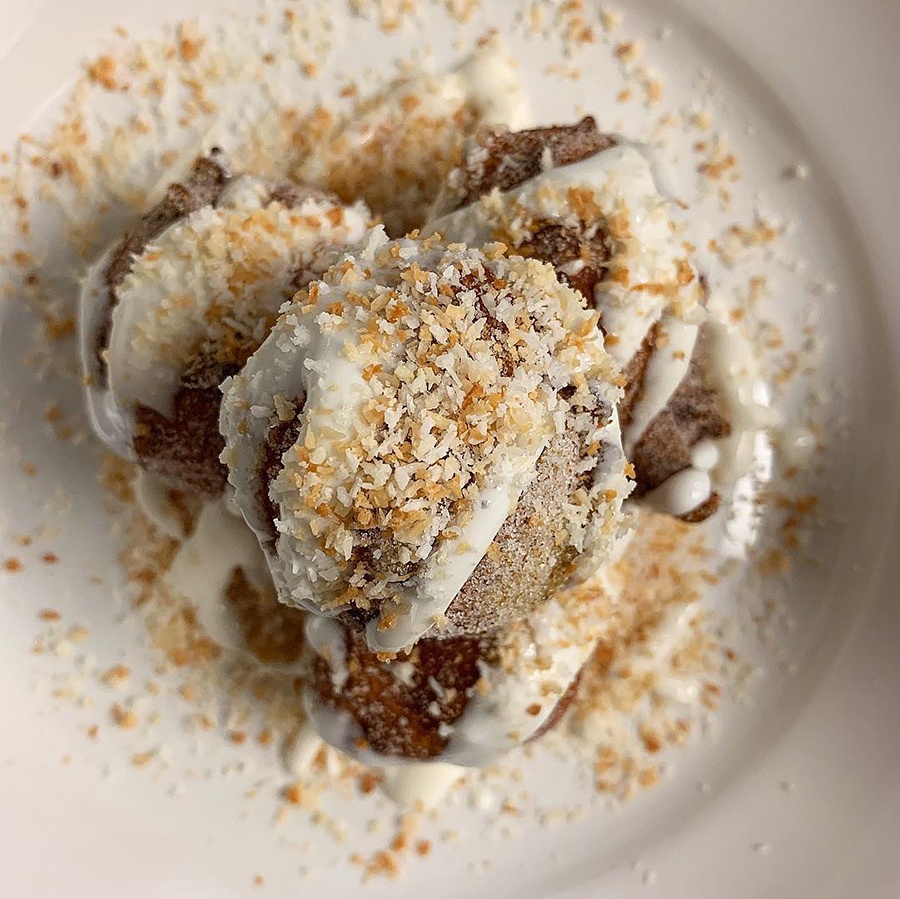 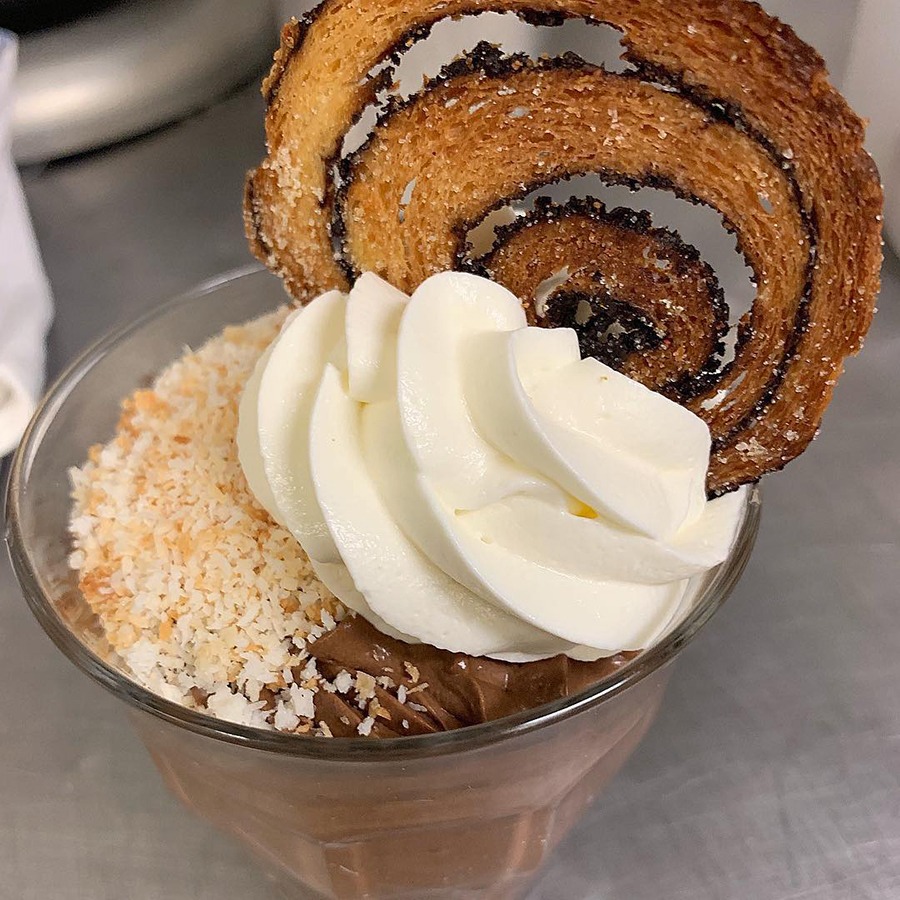 “Milky Way pudding” from a Simcha brunch pop-up at the Townshend. / Photo by Kate Holowchik

Babka French toast from a Simcha brunch pop-up at the Townshend. / Photo by Kate Holowchik